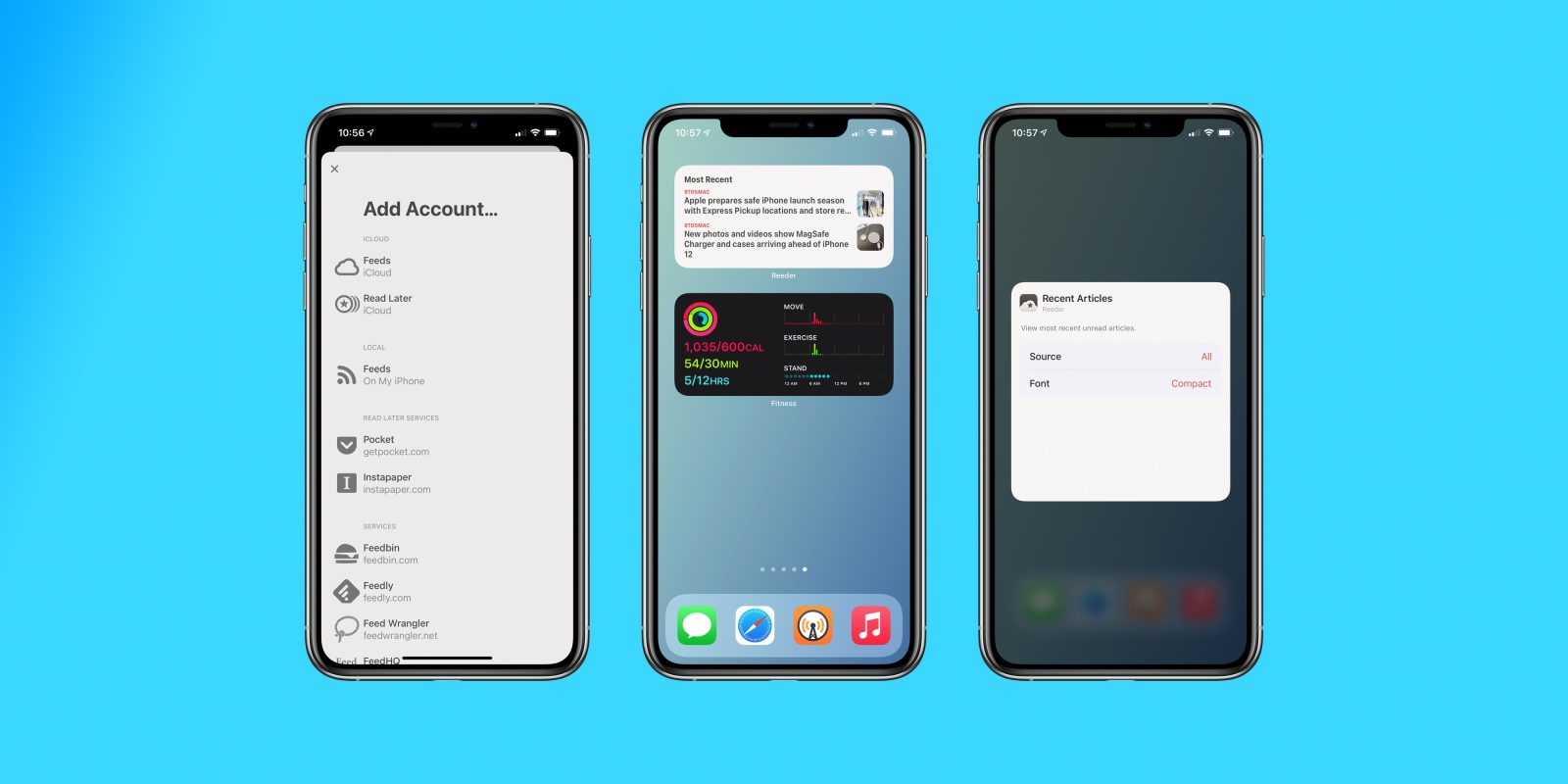 Reeder is one of the most popular RSS readers for iPhone, iPad, and Mac, and this week it’s gotten a handful of new features. Reeder 5 is now available as a new purchase with support for home screen widgets, new feed syncing features, and more.

END_OF_DOCUMENT_TOKEN_TO_BE_REPLACED 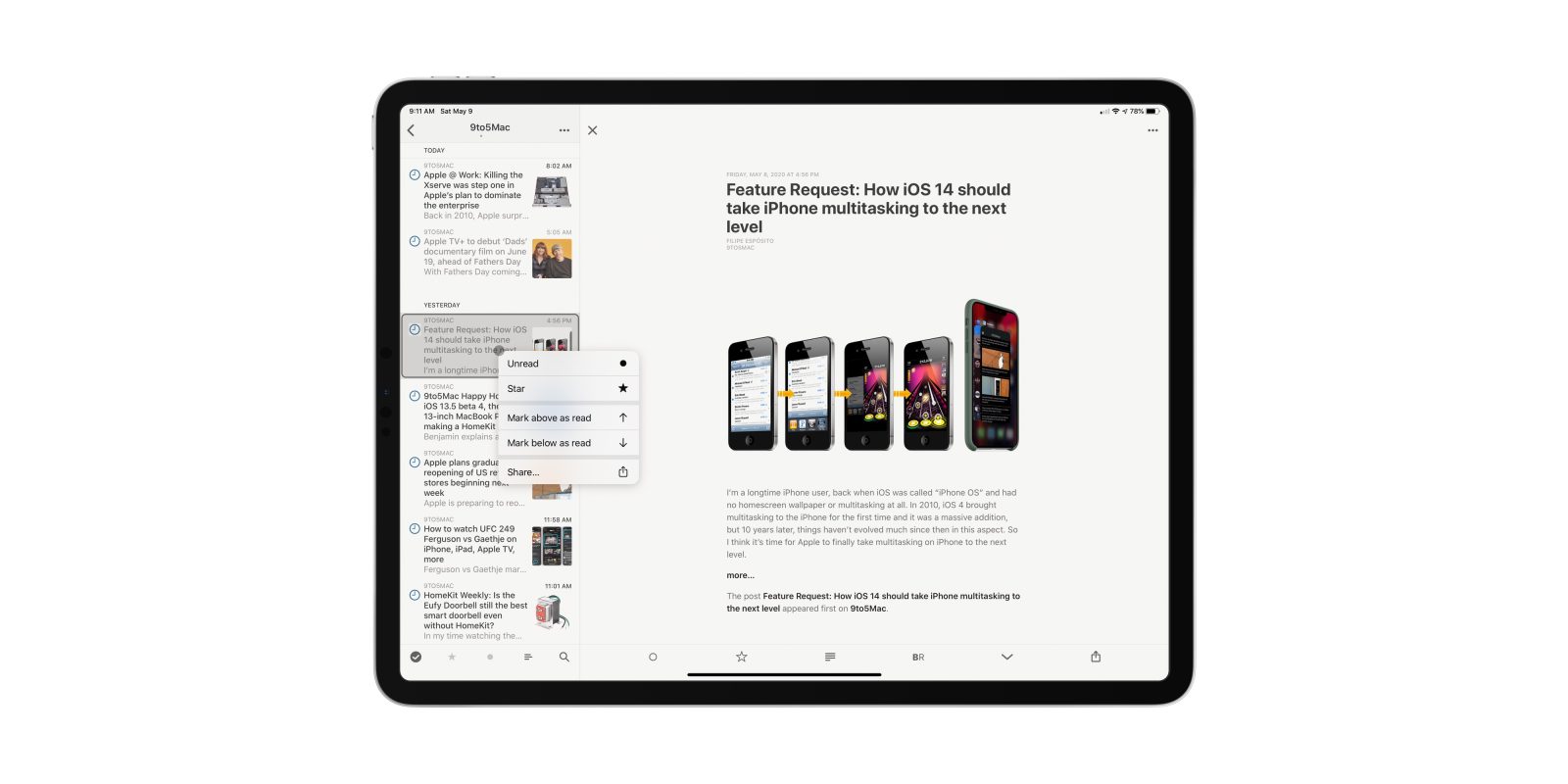 As developers continue to roll out trackpad support to their iPad applications, popular RSS app Reeder is the latest to add the capability. Microsoft, on the other hand, is apparently planning to take a slower approach to implementing the functionality.

END_OF_DOCUMENT_TOKEN_TO_BE_REPLACED 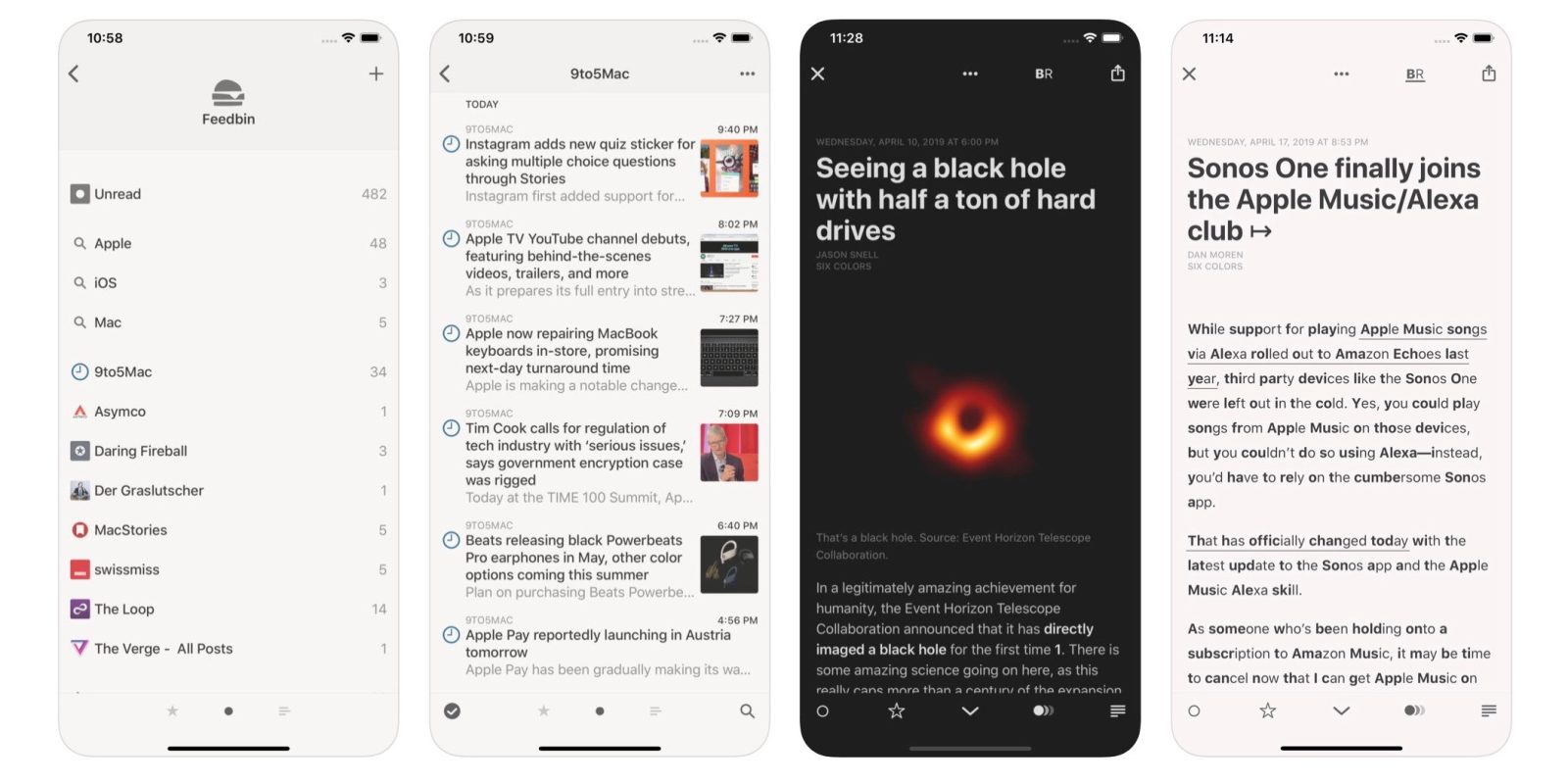 Popular RSS app Reeder 4 has left beta and launched today on both macOS and iOS with a host of new features including an automatic dark mode, a read later feature with iCloud syncing, an image viewer, more layout options, Bionic Reading mode, and more.

END_OF_DOCUMENT_TOKEN_TO_BE_REPLACED 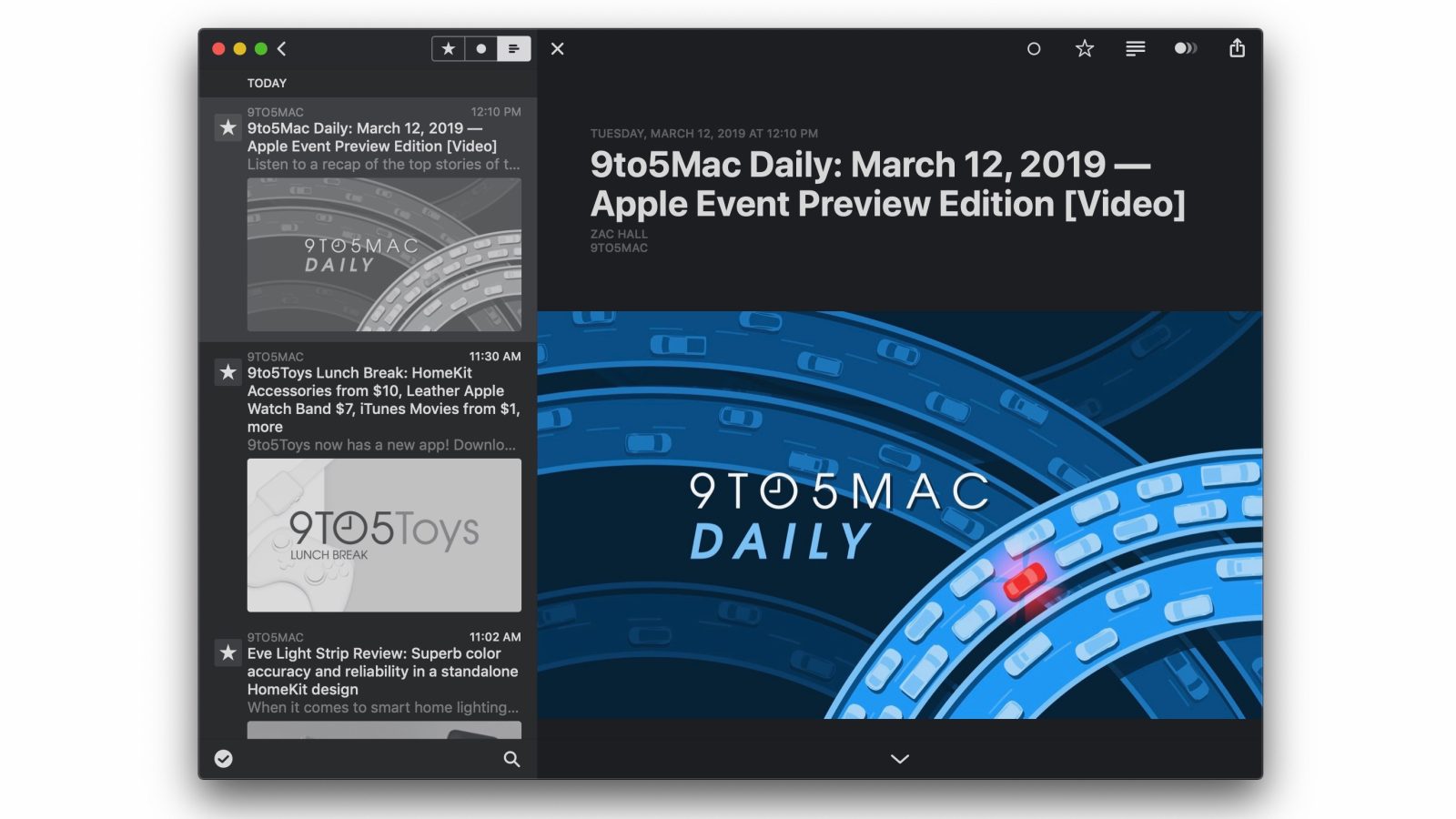 Popular news reader app Reeder has today launched the first public beta for Reeder 4, bringing a host of new features and improvements. Reeder 4 is a complete rewrite of the app and includes interface changes, pull to refresh, automatic Dark Mode, and more.

END_OF_DOCUMENT_TOKEN_TO_BE_REPLACED

We know the developer behind the popular RSS client Reeder has been working on a version 3.0 update for OS X 10.10 Yosemite as we last saw a teaser in April. Today users get the first chance to try out the redesigned RSS service reader as the first public beta for Reeder 3 has gone live. The updated version sports a user interface designed for Yosemite and beyond, more themes for making reading comfortable, and even a few OS X El Capitan features. Reeder says the new version will be available as a free update to current Reeder 2 customers when it’s completed. END_OF_DOCUMENT_TOKEN_TO_BE_REPLACED

The popular newsreader app Reeder has been updated to version 2.2 with a fairly lengthy list of new features and bug fixes.

Notably, navigation has been improved, with the ability to pan left and right to toolbars and empty spaces in list views, as well as adding a drag handle to the toolbar to make it more obvious that you can slide left/right to go forward and back. A loading progress indicator has also been added to the in-app browser.

Smart streams now support grouping by either feed or date, and the app can also now handle feed links from other apps.

Bug fixes include handling of multiple Feedly accounts, the disappearing status bar with the white theme on the iPad and missing scrollbars in the browser and when using dark themes.

Reeder costs $4.99 from the App Store. The latest beta of the Mac version is still available for free from the Reeder site.

The full change list for Reeder 2.2 can be found below:

Reeder for iOS gained support for services like Feedly and Feed Wrangler pretty quickly last year, but Reeder for Mac has taken a bit longer than had originally been anticipated.

Today, Reeder 2 for Mac is available in its first public beta for free ahead of its final development.

Early Tuesday morning, Google Reader finally closed its doors, but not without a plethora of alternatives launching. We’ve covered all sorts of them before, including Feedly, Digg Reader, AOL Reader, and much more. One of the most popular RSS apps for iOS is Reeder, and it has been updated to support some of those alternatives.

Google announced on the Official Google Blog earlier this month that it will retire Google Reader on July 1, 2013, but the brains behind Reeder, a Google Reader client, clarified that development of its apps will continue after July 1. Moreover, since explaining what’s in store for Reeder, both the Mac and iPad apps are now free starting April 1.

This doesn’t seem to be an April Fool’s joke, either, as Apple’s App Store and Mac App Store currently reflect the price drops.

Feedly for iOS, another Google Reader client, updated to version 14 today and brought a new and improved Feed Search and Discovery function, as well as a Title Only View, Must Read section, and more control over layouts.

The update also enhanced Sharing & Save for Later and allows customization of Favorite Sharing Tool to social networks and Favorite Save for Later Tool to Pocket. Version 14 even added a “mark as read” card at the end of each sections, a pull-to-refresh ability in the home selector, and fixes for a logout bug.