Yosemite & iOS 8 How-to: Set up and use AirDrop 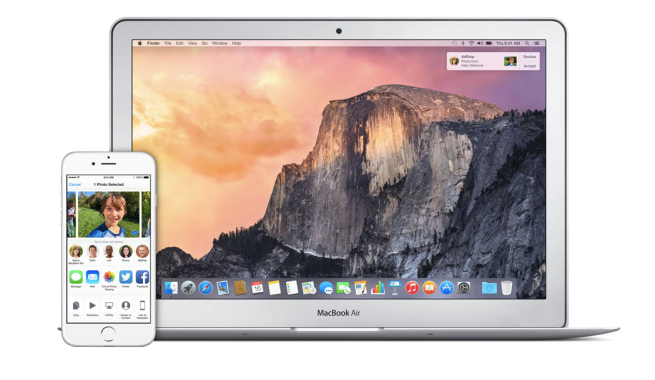 Initially AirDrop allowed you to share files between two Macs or between two iOS devices. Now, AirDrop allows you to share files and information between Mac and iOS devices. It is a device-to-device transfer that works even when the devices don’t have internet access, although Wi-Fi and Bluetooth have to be turned on. This includes sharing photos, videos, music, iWork documents, notes, contacts, links, directions and location data. Many third-party iOS apps like Dropbox, Runkeeper, eBay, Deliveries, and PDF Expert support AirDrop. Apple just added support to Logic to share files via AirDrop. When receiving a file, the recipient receives a notification, allowing them to download the file.

In order to take advantage of AirDrop there are certain hardware and software requirements that you need to have in order for this to work:

Once you have met compatible hardware and software requirements, the devices do have to have Wi-Fi and Bluetooth turned on, even though it works without internet access. Now we can start to use AirDrop.

On the iOS device, you first need to make sure that AirDrop is turned on via Control Center. Tapping on AirDrop allows you to turn it off, only use AirDrop with people in your contacts, or allows everyone in the nearby vicinity to share items via AirDrop.

On the Mac, you first need to make sure that AirDrop is turned on by opening up Finder and then selecting AirDrop. Just like on the iOS device, you have the option to turn off AirDrop, only use AirDrop with people in your contacts, or allows everyone in the nearby vicinity to share items via AirDrop. In order for the iOS device to appear listed, the device does have to be unlocked.

In this example we will share a website from an iOS device to the Mac via AirDrop. Tap on the Share icon, the one with the square and the arrow sticking up. When you do that, you will see the options you have available to share the website. The first option listed is for AirDrop. It does take a couple of seconds for the information about AirDrop to change to the people and devices that are available to AirDrop.

When you press on the person you want to AirDrop the item with, a blue circle appears around their picture and the word Sent appears in blue below their name. On the computer, the person receives a notification in Notification Center alerting them they are receiving an item. It shows them who sent it, as well as a tiny thumbnail preview of what it is that was sent. Even though there is an Open button to press that is displayed temporarily. Depending on what the item is the computer either automatically opens it, or downloads the item and puts it in the Downloads folder such as for pictures and documents.

The first two methods to AirDrop from the Mac to the iOS device involves using Finder. Find the file you want to share in Finder. The first method involves doing a right click on the item. Then you are going to select Share from the menu and choose AirDrop.

When you press on the person you want to AirDrop the item with, the word Sent appears below their name. On the iOS device’s lock screen , the person receives a notification alerting them they are receiving an item. It shows them who sent it, as well as a tiny thumbnail preview of what it is that was sent. The iOS device automatically opens the picture and saves it to the Photos app. 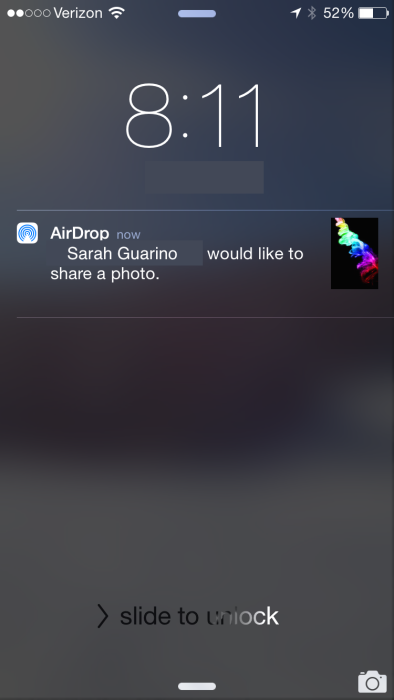 The other method using Finder to AirDrop an item from the Mac to the iOS device requires having two Finder windows open. One containing the item you want to share via AirDrop, and the other having AirDrop selected in the left hand sidebar. Then you are going to drag and drop the file on top of device you want to share it to. When you do that on the computer the word Waiting appears where it used to list what type of device it is.

On the iOS device’s home screen, the person receives a notification alerting them they are receiving an item and it tells them what type of item they are receiving. There is a progress circle that fills in blue and when it is done the check mark in the center turns blue and it quickly opens the item. 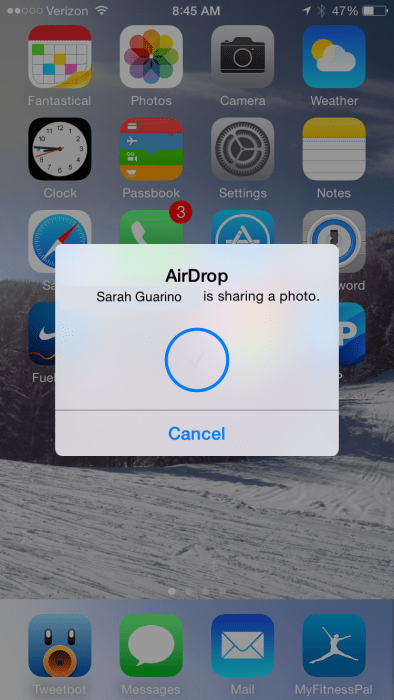 The final way to send files via AirDrop from the Mac to the iOS device involves using apps. A lot of the apps on the Mac such as, Safari, Contacts, Notes, Maps, Preview, Pages, Numbers, and Keynote have the Share button, the one with the square and the arrow sticking up.

When you press the Share button, you have the option to AirDrop it.

When you do so, you will get notifications on the iOS device just like in the previous example. For example if you are sharing via AirDrop an iWork file, and the recipient does not have iWork on the iOS device, there is a prompt which allows you to choose which app on the device that is compatible to open up that file. 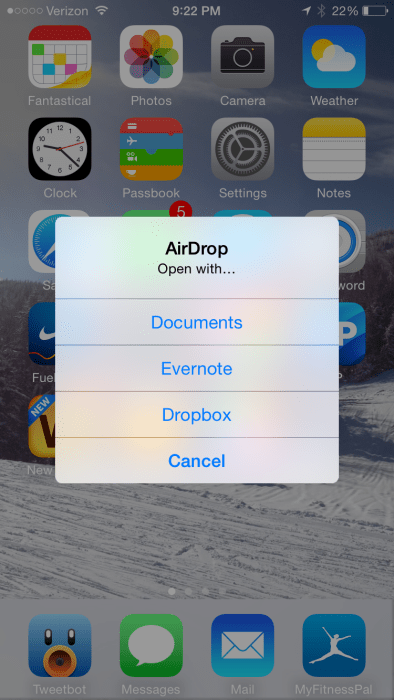 When you are using AirDrop on Macs that are from 2012 or newer and both running Yosemite, they are using BT LE and peer-to-peer Wi-Fi. It works the same method as using AirDrop to share from a Mac to an iOS device. The only thing different is that the recipient does have to have Finder open, with AirDrop selected on the left hand side. When the recipient receives a file via AirDrop they have the option to Save and Open, Decline or just Save the file. 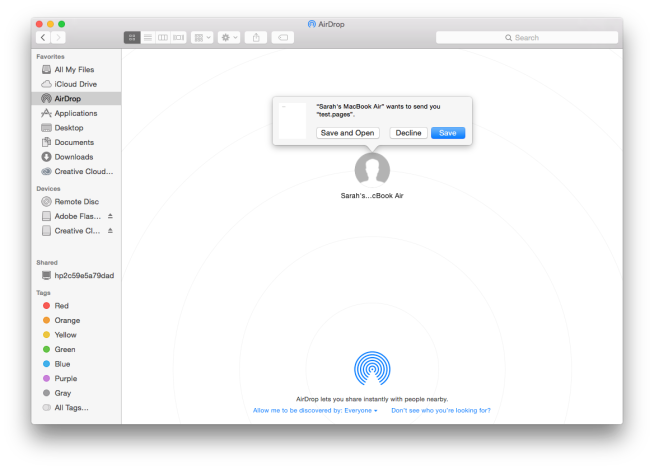 If you are using AirDrop between a Mac that is from 2012 or newer and an older Mac the set up process is slightly different. This is because on the older machines, AirDrop runs off of Bonjour and personal area networking.

First you want to be on the newer Mac that is running Yosemite and have Finder open with AirDrop selected on the left hand side. Then you are going to click on Don’t see who you’re looking for, down on the bottom in blue. 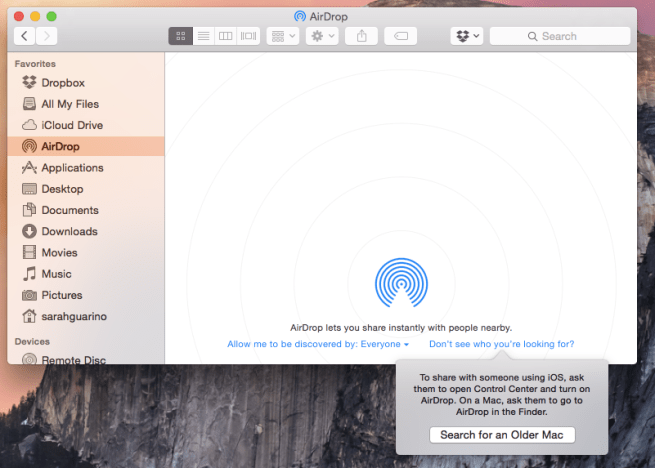 Then press on Search for an Older Mac. Meanwhile on the older Mac, open up Finder and select AirDrop on the left hand side bar. Then automatically the older Mac appears available to AirDrop. 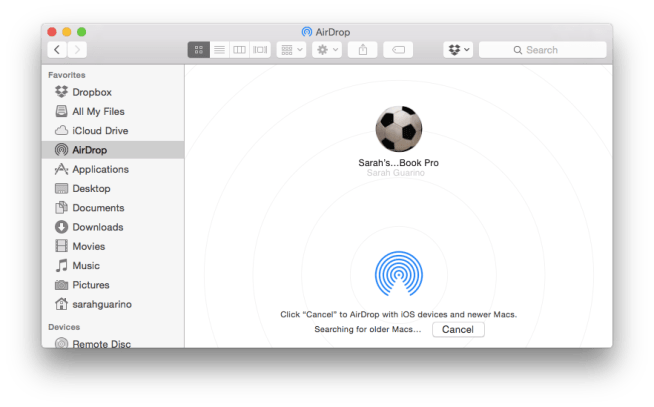 Then to share files with the older Mac works in the exact same method. While using AirDrop to the older Macs, the post 2012- Macs and iOS devices won’t display as being to AirDrop. When you want to switch devices you want to share items to press Cancel down in the bottom on the right.

That is how you AirDrop between iOS devices and Macs and from Mac to Macs.