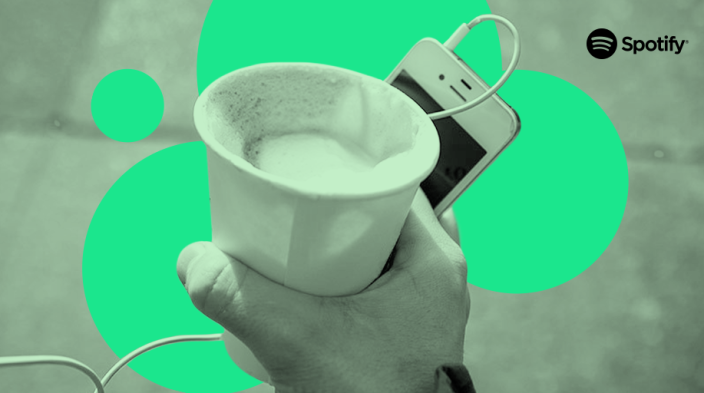 Ahead of the highly anticipated launch of Apple’s streaming music service next month, Spotify today has revealed a new agreement with longtime Apple partner Starbucks. Spotify will team up with the coffee giant to offer enhanced music playback controls for both users and employees in 7,000 U.S.-based Starbucks locations.

In addition to enhanced playback controls in-store, Spotify users will be able to obtain “Stars as Currency” for the My Starbucks Rewards loyal program, which will allow users of Spotify Premium to obtain free drinks. There will also be a dedicated section within Spotify’s app for accessing playlists from Starbucks.

Starbucks has been a longtime partner with Apple, offering free downloads of new music via its iOS app and promote iTuns Music in-store. With Apple Music slated to launch at the end of next month, it’s interesting to see Starbucks seemingly abandon its long-standing Apple relationship in favor of Spotify.

Also this weekend, Tidal front-runner Jay Z took stabs at Spotify, Apple, Google, and Steve Jobs during a freestyle performance. The rapper slammed YouTube for its poor payouts, saying it pays artists a tenth of what they deserve. The full lyrics to the freestyle are available here. It’s kind of ironic considering Tidal ripped off a considerable amount of Spotify’s UI, but we’ll let Jay be Jay.

The new partnership between Starbucks and Spotify will rollout to the United States gradually as the year progresses. It will then expand to Canada and the United Kingdom. The full press release is below:

Popular Starbucks Music Made Available for Everyone on Spotify

Starbucks Coffee Company (Nasdaq: SBUX) today announced that it has entered into a letter of intent with leading music streaming service, Spotify®, to establish a multi-year relationship that will link its 7,000 company-operated stores in the U.S. and 10 Million My Starbucks Rewards® loyalty members with Spotify’s more than 60 Million global users to offer a first-of-its-kind music ecosystem.  This interconnectivity will allow Starbucks MSR members unique access to Starbucks music on Spotify, the ability to influence in-store playlists as well as opportunities for Starbucks MSR members to earn “Stars as Currency.”

“For over forty years, music has played a vital role in Starbucks Third Place experience – inspiring our partners and customers in unexpected ways that have helped to shape the global pop culture.  And we are delighted and honored to bring Spotify directly to our customers,” said Howard Schultz, chairman and ceo of Starbucks. “Throughout its history, Starbucks has worked closely with the music industry, offering a variety of artists a platform for their work. By connecting Spotify’s world-class streaming platform into our world-class store and digital ecosystem, we are reinventing the way our millions of global customers discover music.”

Through a phased rollout later this fall in Starbucks® U.S. company-owned locations, followed shortly thereafter in Canada and the United Kingdom, the agreement specifies that Starbucks and Spotify will collaborate on a next generation music ecosystem. As part of the agreement, Spotify Premium will be promoted in these stores.

Coming first, Starbucks 150,000 U.S.-based partners (employees) will receive a Spotify Premium subscription, followed shortly thereafter by partners in Canada and the U.K. This fall, Starbucks partners can help shape the in-store music programming using tools provided by Spotify. These partner-influenced playlists will then be accessible on Spotify via the Starbucks Mobile App so that customers can stream music anywhere, anytime from their mobile device.

In addition, Spotify users will enjoy opportunities to obtain “Stars as Currency” for My Starbucks Rewards loyalty program. This will represent the first time that Starbucks loyalty program stars can be accessed by a third party for the benefit of Starbucks MSR members and Spotify users. Spotify will also include a dedicated section on Spotify featuring new playlists from Starbucks and its most popular music from the past 20 years, available to all Spotify users.

“Starbucks has a rich music heritage and customers who are passionate music fans which makes us incredibly proud to be their music partner,” said Daniel Ek, CEO of Spotify. “Spotify has powered more than 25 Billion hours of listening around the world so far, and we’re looking forward to creating unique in-store music experiences while also making more than 20 years of popular Starbucks music available to both Starbucks customers and Spotify’s 60 Million global music fans.”

“We plan on building one of the most robust digital ecosystems of any retailer in the world.  Given the evolution of the music industry and the proliferation of streaming technology, it was natural that we would partner with Spotify in offering our customers a new way to engage with their favorite music,” added Kevin Johnson, president and coo of Starbucks.  “Starbucks ability to innovate with partners such as Spotify, creating new ways and platforms to engage with our customers, will afford us unprecedented interconnectivity across all of our capabilities, and provide new access points for Spotify as they continue to grow globally.”

For more than four decades, Starbucks has built a differentiated Third Place experience with music at the heart of its coffeehouse culture. In 1994, a dedicated entertainment team began selecting original CDs spanning a diversity of musical genres and geographies. This program has spotlighted the extraordinary careers of legendary artists such as the late John Lennon, Aretha Franklin and Bonnie Raitt, among many others. Bob Dylan, Yo-Yo Ma, the Rolling Stones and Ray Charles are among the legends who identified their favorite recordings for Starbucks Artist Choice series.  Starbucks seasonal CDs have celebrated moments ranging from Valentine’s Day to summer road trips to holiday festivities.  Starbucks has also become a champion of emerging artists such as John Legend, Madeleine Peyroux and Fleet Foxes, introducing customers to these musicians at an early point in their careers.

Since 1971, Starbucks Coffee Company has been committed to ethically sourcing and roasting high-quality arabica coffee. Today, with stores around the globe, the company is the premier roaster and retailer of specialty coffee in the world. Through our unwavering commitment to excellence and our guiding principles, we bring the unique Starbucks Experience to life for every customer through every cup. To share in the experience, please visit us in our stores or online at www.starbucks.com.  You can learn more about the Starbucks Reserve™ Roastery and Tasting Room here: www.Starbucks.com/roastery