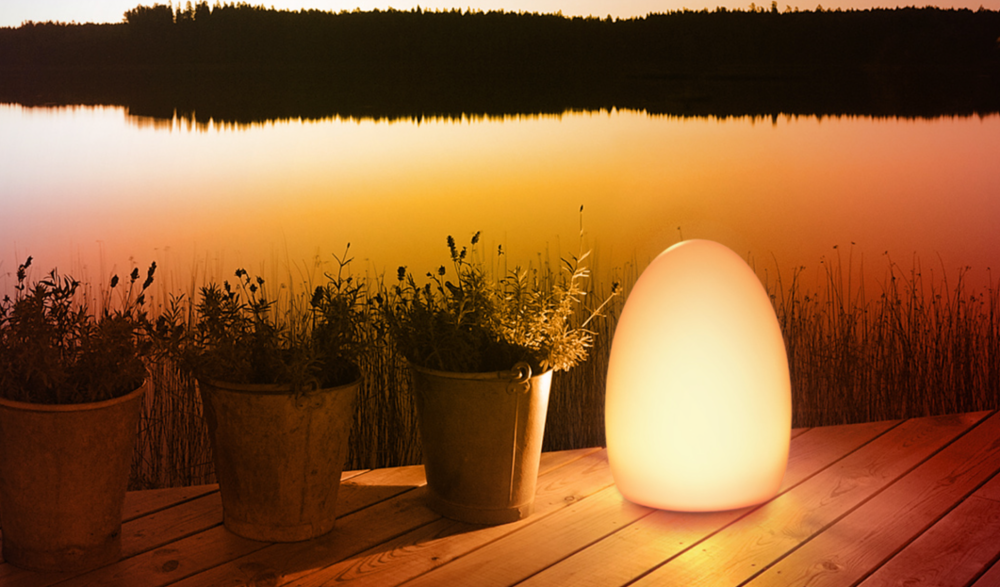 The Elgato Avea Flare is an egg-shaped mood light with an iPhone and Watch app available to control the scene and colors displayed. It sits in the corner of a room or garden and discreetly glows. I tested the standalone unit, but you can also buy the Avea Bulb which is the same concept in a different form. The Elgato Eve Room ($78) is an indoor climate detector — it measures air quality, humidity and temperature. This data can then be reviewed through an iPhone app to act upon or using your voice with Siri questions. The Eve sensor (pictures below) is meant to be tucked away and out of sight, on a shelf or wall, silently checking up on your interior air quality.

These two products are from the same manufacturer, but they sit at opposite ends of the spectrum in terms of smart home gear; one has a clear functional purpose and the other is a ‘smart’ whimsical decoration. Both integrate with iOS via an iPhone app and both make cool additions to your life. I’ve been using both for a few weeks; read on for my full review of these smart home devices from Elgato …

Let’s start with the Flare. It’s a 16 color self-standing mood light — hidden inside the egg-shaped casing is a 60 lm LED. It’s not going to be your primary light in a room, it isn’t bright enough for that. It’s meant to add some atmosphere — think of it as a glow casting colored rays over the corner of a room. There’s also an alarm clock mode, so you can have it naturally brighten at 8am every morning to help you get of bed.

You can turn the light on or off using physical buttons in the base but the main control mechanism is the Flare app. Pairing the Flare uses Bluetooth, which worked flawlessly for me but mileage can vary with any Bluetooth device in regard to connection reliability and range. The app features a list of large tappable tiles representing different scenes, such as Burning Wood or . Most of these provide subtle color changes through a couple of hues but there are are some crazy extravagant options for parties, like the high-paced ‘Candyland’ theme which rapidly cycles between every color of the rainbow.

If you don’t fancy one of these ambient mood settings, you can pick a solid color. You can also tweak the vibrance and output brightness across all of these modes. And the Flare app comes with an Apple Watch app, so you can change all of these settings from your wrist. Alas, like many third-party watch apps, this is slow and a bit clunky.

In terms of physical size, the Flare is about half a metre high. It’s egg shaped and all white, so it’s a pretty modern accessory in terms of design. Its appearance fits most modern (and outdoor) home decors, but if you have a traditional style interior, it could stick out like a sore thumb. You can’t put this thing out of sight for ambience — it isn’t big enough to cast any light. The body of the device has to be exposed to the room for it to have any impact. The Flare is wireless, with a plate for inductive charging at night. I just leave my on the charging pad at all times.

The Avea Flare is cool. The big issue with the Flare is the lack of HomeKit support. The Avea range was developed before Apple was ramping HomeKit approvals to manufacturers. This limits the Flare a lot. You are forced into controlling the Flare through their own app, you can’t integrate into automated smart home workflows and you can’t turn it on and off with Siri either. These limitations are frustrating as a person that wanted to be invested into an Apple ecosystem. It feels like a dedication to the old, deprecated technology as the iOS integration for HomeKit devices versus proprietary Bluetooth accessories is unparalleled.

The Flare is really nice as a light, but is lacking compared to its competitors because of this one point. It’s difficult to recommend this in a comparison against Philip Hue smart lights, for example, which offer rich HomeKit integration features. 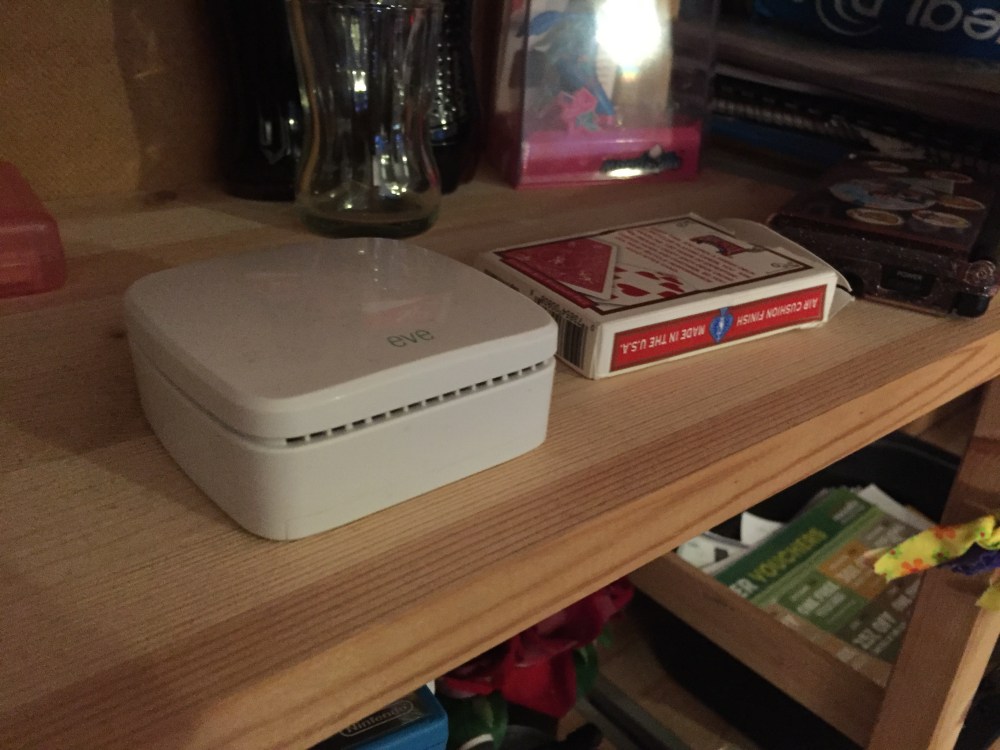 The Elgato Eve Room is different. It feels modern, predominantly because it does support HomeKit. The Eve Room is a small puck-sized sensor that sits on a tabletop or shelf. It doesn’t make noise, it doesn’t light up. So what is it doing? Passively, every ten minutes, it reads the temperature, humidity and air quality. It stores this information on an internal chip and shares the data with your iPhone through the Elgato Eve app.

The heating system in my flat requires a lot of manual tuning so the graphs provided by the Elgato are extremely useful. I can see if it got too hot overnight, whether I can leave it off during the day to save some energy, etcetera. Previously, I relied on a cheap and cheerful digital thermometer. One immediate benefit of the Eve over what I was using before is the air quality measurement:  my old thermometer had no way of knowing the parts per million ratio of the air. With the Eve, the app shows this data in a graph with color-coded sections to represent the quality scale, from Excellent to Poor.

The advantages of the Eve are clear: you can see more than just the current reading, use a familiar UI with simple touchscreen controls, check this information on your iPhone and coalesce the info with other smart home devices via HomeKit. You can set up triggers to automatically turn on the smart plug connected to your desk fan if the room starts getting too hot. If the Flare supported HomeKit, you could change the color of the room based on the temperature. Still, the interoperability of HomeKit means you can achieve something similar with an Eve coupled with Philips Hue lights.

HomeKit support means that you can also access all the data via Siri. Just ask your phone or watch ‘What’s the temperature in the Living Room’ and it will tell you. The same for humidity … Siri doesn’t seem to support air quality measurements however, because I could never get that phrase to work. You also have to account for the occasional problem where Siri can’t find your device at all — this appears to be systemic issue with all HomeKit accessories and not related to the Eve specifically. For me, Siri fails to find the sensor very infrequently but when it happens, it is annoying especially on the Watch where Siri can be slow. The Eve app never failed to read the data.

I only have one Eve sensor setup in the living room, but the system supports buying more and tracking data independently for every room of your house. Bigger houses may benefit from multiple sensors, but I think one sensor is just fine. The variation of temperature in your home will be relatively small. And you can always pick up the Eve and move it to a different room if you want to track another climate for a while.

I honestly didn’t expect to like it as much as I did. The Eve Room is a really nifty little gadget, appropriate as a holiday gift or any time of the year really. There is certainly a big novelty factor to the product, but it’s also genuinely useful. The iPhone app lets you see a lot more info than you normally can with wall-mounted thermometers and with a far prettier user interface. The inclusion of HomeKit lets you take the Elgato Eve to the next level, making it a core part of the smart home.

You can buy the Elgato Eve for $78 and I wholeheartedly recommend that you do. For the Avea Flare moonlight, as outlined above, the lack of HomeKit is frustrating but it’s still a nice mood light with iPhone and Watch app and still worth picking up if you can find a deal. Perhaps wait for the next generation Avea Flare which will undoubtedly include HomeKit support. You can also buy Avea Bulbs, but again why would you when you can get the superior Philips Hue equipment?

Check out my HomeKit gift guide for more product recommendations for your smart home.