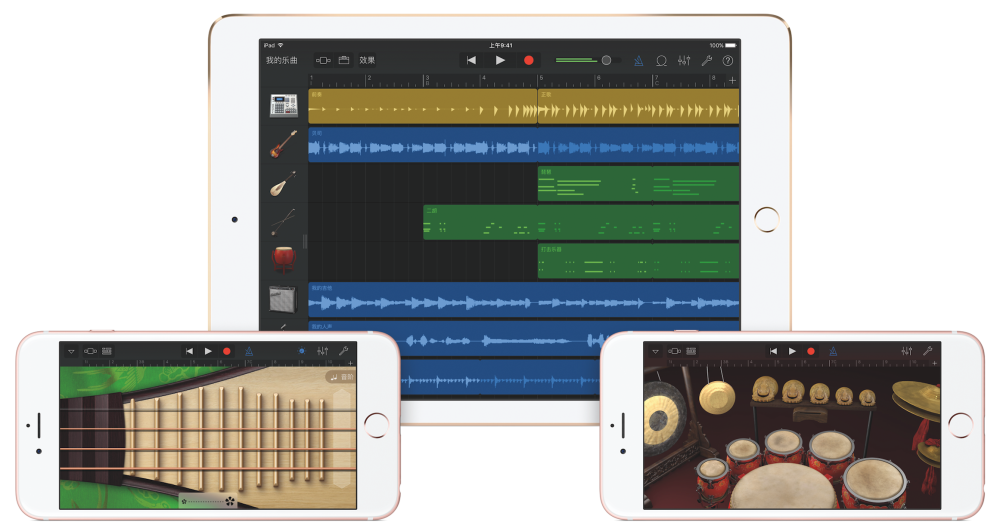 Across both platforms toady’s update adds 300 new Apple-created Chinese musical loops, which Apple says allow for users to “tap into their creativity and make beautiful Chinese-inspired music.” Additionally, the update adds traditional Chinese instruments the pipa, erhu, and Chinese percussion. These instruments can be played using multi-touch on iOS and via the keyboard typing feature on OS X. They also support being played by connoting a third-party USB music keyboard, as well.

On iOS, today’s update adds two new Chinese templates to the app’s Live Loops functionality, as well as support for sharing creations to the popular Asian social networks QQ and Youku. Furthermore, the update on iOS adds a variety of other improvements:

Apple says that Chinese localization is significantly enhanced across the entire app, with all sounds, loops, and instruments now translated to Simplified Chinese or Traditional Chinese. In a press release, Susan Prescott, Apple’s vice president of Product Marketing, had the following to say regarding the update:

“GarageBand is the most popular music creation app in the world and we’re excited to introduce these new features that incorporate the rich history of traditional Chinese music,” said Susan Prescott, Apple’s vice president of Product Marketing. “By adding classic Chinese instruments and new Live Loop templates, the new GarageBand app makes it fun and easy to make Chinese-inspired music right on your iPhone, iPad or Mac.”

BEIJING — May 17, 2016 — Apple® today announced an update to GarageBand® that celebrates the rich history of Chinese music with new instruments and extensive Chinese language localization throughout the app. Building on GarageBand’s extensive collection of sounds, this update adds traditional Chinese instruments — the pipa, erhu and Chinese percussion — along with 300 Apple-created Chinese musical loops, giving users the power to tap into their creativity and make beautiful Chinese-inspired music right on their iOS device or Mac®. GarageBand for iOS users also get two new Chinese templates for Live Loops, and new sharing options to popular Chinese social networks, so they can easily share their music creations with friends and followers across QQ and Youku.

“GarageBand is the most popular music creation app in the world and we’re excited to introduce these new features that incorporate the rich history of traditional Chinese music,” said Susan Prescott, Apple’s vice president of Product Marketing. “By adding classic Chinese instruments and new Live Loop templates, the new GarageBand app makes it fun and easy to make Chinese-inspired music right on your iPhone, iPad or Mac.”

“As a musician I’m always looking for ways to take my music in new directions and GarageBand has been such a great tool for me to experiment and add new elements to my songs on-the-go,” said award-winning music artist JJ Lin. “I love how the latest update to GarageBand adds traditional Chinese instruments along with brand new loops so I can play around with mixing traditional and modern sounds to create completely new styles.”

The pipa, erhu and Chinese percussion instruments in GarageBand can be played on iPhone® or iPad® using Multi-Touch™, and on Mac through the built-in Musical Typing feature or by connecting a third-party USB music keyboard. Each instrument includes different playing articulations, including rapid picking and note bend for pipa, and trill, grace note and glissando for erhu, making it incredibly easy for a novice to create a realistic and expressive performance. iPhone users can also use 3D Touch™ with the erhu and pipa to dynamically control vibrato and intensity, and both the pipa and erhu include Autoplay, letting users tap on any chord and get a complete, rich performance. Users can also play a collection of Chinese percussion instruments including drums, wood blocks, cymbals and gongs.

This update adds 300 Apple-created loops from a variety of instruments and styles, including guzheng, dizi, yangqin and Peking Opera, to the library of Chinese musical content in the app. These loops can be mixed and matched with Chinese instruments in GarageBand to create traditional music or entirely new styles. GarageBand for iOS also supports Live Loops, a new and intuitive way to create music by simply tapping cells and columns in a highly visual grid to trigger different looped instruments and samples. And, Live Loops in this update adds two new Chinese Live Loops grid templates, one traditional and one modern, showcasing a variety of Chinese instruments and percussion that are all playable via the Live Loops grid.

Chinese localization is also significantly enhanced across the entire app, with all sounds, loops and instruments now translated to Simplified Chinese or Traditional Chinese.

Pricing & Availability Today’s GarageBand 2.1.1 for iOS and GarageBand 10.1.2 for Mac updates are free for all existing users, and GarageBand is available for free with all new iOS and Mac devices. Customers with older, non-qualifying devices can purchase the app for $4.99 via the App Store® and Mac App Store. Users in Greater China will see these new features by default on iOS and OS X® after updating. Outside of Greater China, these new features are visible by default on OS X and can be enabled on iOS devices in the advanced settings menu. For more information about GarageBand for iOS, visit www.apple.com/ios/garageband and for more information about GarageBand for Mac, visit www.apple.com/mac/garageband.