Although there are still many doubts about the iPhone 8 rumored design, mocked up above, a new schematic has surfaced on Weibo today. This drawing (embedded after the break below) is a more detailed version of what we saw yesterday and includes label annotations for many components.

The new dual front and (vertical) back cameras are visible and a rear Touch ID sensor is nowhere in sight, again implying it will be integrated into the OLED display. What’s most interesting about this latest leak though is that it indicates the parts used by the iPhone 8 for wireless charging …

The drawing is in Chinese but we have had the image translated to confirm the exact components being shown. 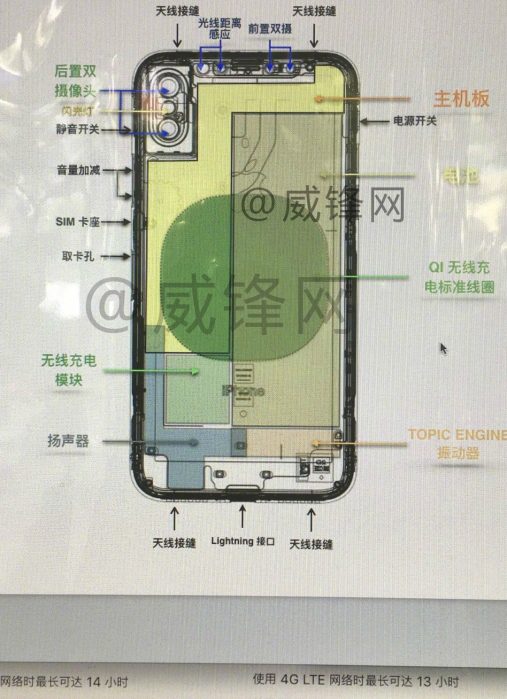 The four seams for antennas is reminiscent of the iPhone 4/4s design which likewise had antenna lines in the four corners of the chassis. With this purported schematic, the antenna gaps are positioned on the top and bottom sides.

The callout to two wireless charging parts corroborates what KGI has been saying for months, but it also more precisely states that the components are ‘Qi,’ the wireless charging standard that relies on inductive pads to transmit power to devices. The Apple Watch charger uses a variant of Qi technology. Apple joined the Wireless Power consortium that manages the Qi standard in February.

It’s also interesting to note how much internal space Apple will dedicate to making wireless charging a reality, if this schematic is real. As well as the large coil (represented by the green circle), there is also the separate square wireless charging module in the lower left corner.

There have been some sporadic claims in the past months that the iPhone 8 would feature ‘truly’ wireless charging — somehow able to receive power over the air without the need for capacitive pads. This seems unlikely given the current state of technology and the fact that this leak specifically denotes the device as using ‘Qi’ components.

To get a sense of what this iPhone 8 would look like in the hand, refer to our earlier coverage of the iPhone 8 dummy which also uses this design.

Apple is expected to officially announce the new iPhone at a media event in the fall but it may not ship in the usual September timeframe as the company has reportedly faced production delays. Recent rumours have suggested the iPhone 8 will be available to customers in late October or early November.

As well as wireless charging, Apple’s new flagship phone will tout a larger large 5.8-inch curved OLED screen in about the same overall device size as the iPhone 7, 3D-sensing front cameras, an Apple A11 SoC and more.

Apple is also expected to announce two iterative updates to the iPhone 7 and iPhone 7 Plus, keeping the same exterior chassis with upgraded internals. KGI has said that these ‘iPhone 7s’ phones will also get the same wireless charging functionality as the iPhone 8.