Apple Music vs Spotify: Which should you choose? 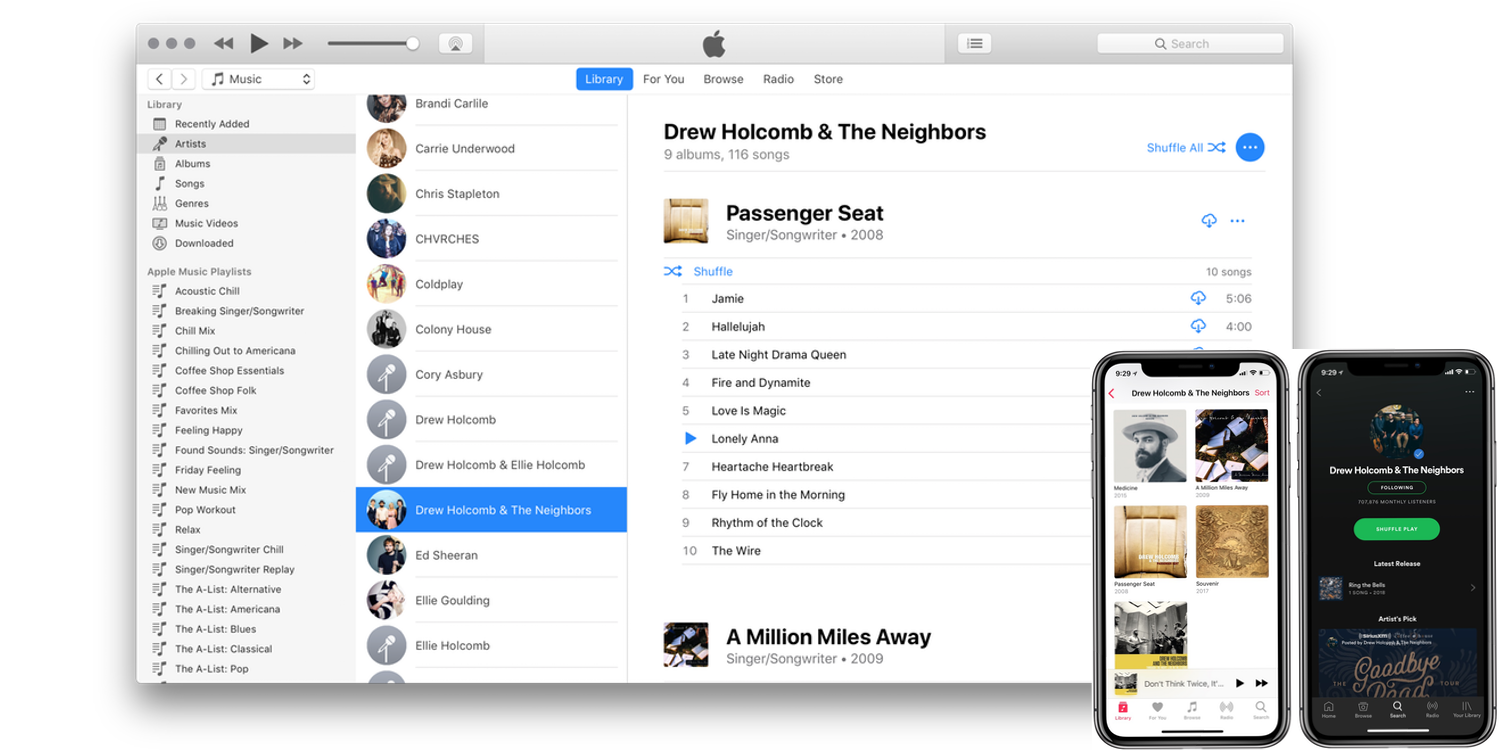 Apple Music and Spotify are the dominant players in the streaming music industry. Spotify just announced they have 75 million paid subscribers with 170 million total active users. Apple recently hit 40 million subscribers. It’s clear that both companies are a hit with consumers. In fact, the streaming music industry has revitalized the music business. I often get asked, how do I choose between Apple Music vs Spotify

I’ve gone back and forth on that. In reality, Apple Music and Spotify are both excellent services. I remember paying $20 for a single CD that probably had two good songs. This time period is the golden age for music fans. We have access to all the music in the world for around $10 per month.

Apple also offers a $99 per year plan for single subscriptions. This plan makes the monthly rate $8.25 per month. Spotify has offered this plan on occasion in the past, but it’s just a promotion (instead of an ongoing pricing plan).

Spotify made the news recently by offering a bundle with Hulu

The bundle costs $12.99 per month, and for that you get Spotify Premium plus the entry-level Hulu package. That’s a saving of five dollars on the normal $18 cost. Spotify Premium subscribers can also trial Hulu for three months for just 99 cents.

The downside to this bundle is you can’t use a Spotify family plan or activate any add-ons with Hulu. Spotify and Hulu also offer similar plan for students that is only $5 per month.

In the end, both services are around the same amount of money per month. If you are buying a single subscription, Apple’s $99 per year plan is the way to go. 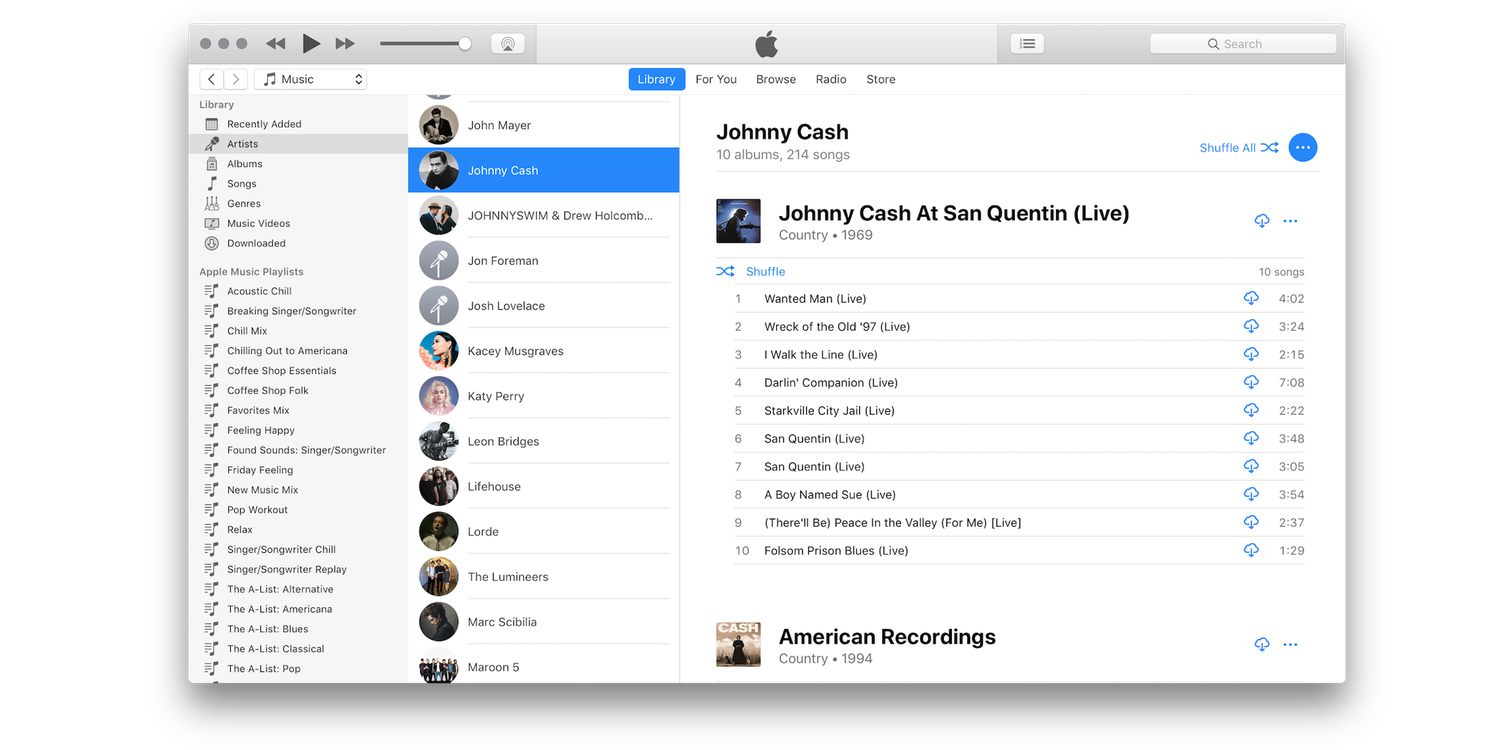 When looking at Apple Music vs Spotify, they are both loaded with music. Spotify claims it has over 35 million songs in its library. Apple claims it has 45 million songs. When it comes down to it, both are loaded with tons of back catalog and current content. Apple Music will have the occasional exclusive album for a few weeks, but most albums usually appear on both at the same time.

One aspect where Apple Music has a clear advantage is for content that isn’t available on its service. A feature of Apple Music is iCloud Music Library. This feature lets you add music to iTunes on the Mac or PC, and then it will add it to your library across all your devices. This feature is helpful if you have a lot of live albums that aren’t available for any streaming service. iCloud Music Library is also handy when a record isn’t available to stream but is to purchase. An example of when this is useful is when Taylor Swift’s most recent album was released. It didn’t appear on Apple Music or Spotify for three weeks. If you wanted to buy it as an Apple Music subscriber, you could just purchase it on iTunes and then it would be automatically added to your library. If you are a Spotify user, there is no way to do this. You can still buy it, but it would be inside the Music app on your iPhone vs being inside of Spotify (where the rest of your library is).

Music videos have been part of the Apple Music service since its inception, with unlimited ad-free video playback included in the monthly subscription.

The updates take the content that was always available and make it more prominent with recommendations and continuously updated editorial, akin to the New Music page for singles and albums.

Spotify doesn’t offer music videos. It includes a video section with some exclusive music-related content, though. If music videos matter in your Apple Music vs Spotify comparison, then Apple Music’s videos will be a strong reason to pick it.

One area that Apple could do a lot better is on Beats 1. I love the premise of Beats 1 with DJs who love music and are sharing a lot of new music with the world. I find the premise of it hard to follow. There are no notifications for certain shows (or when artists I follow are going to be doing interviews, etc).

Spotify has been promoting its podcast support recently, and while Apple offers a podcast solution, it’s inside another app. Spotify is touting “one app” for all of your audio content. If you only listen to one or two shows, you might find it useful. Otherwise, you should look at a dedicated app like Apple Podcasts or Overcast.

Outside of a few exceptions, both companies have more content than you could probably ever listen to.

It feels comical to be critiquing both of these services. Both are good. I probably prefer Apple’s design a tad better, but Spotify isn’t far behind. 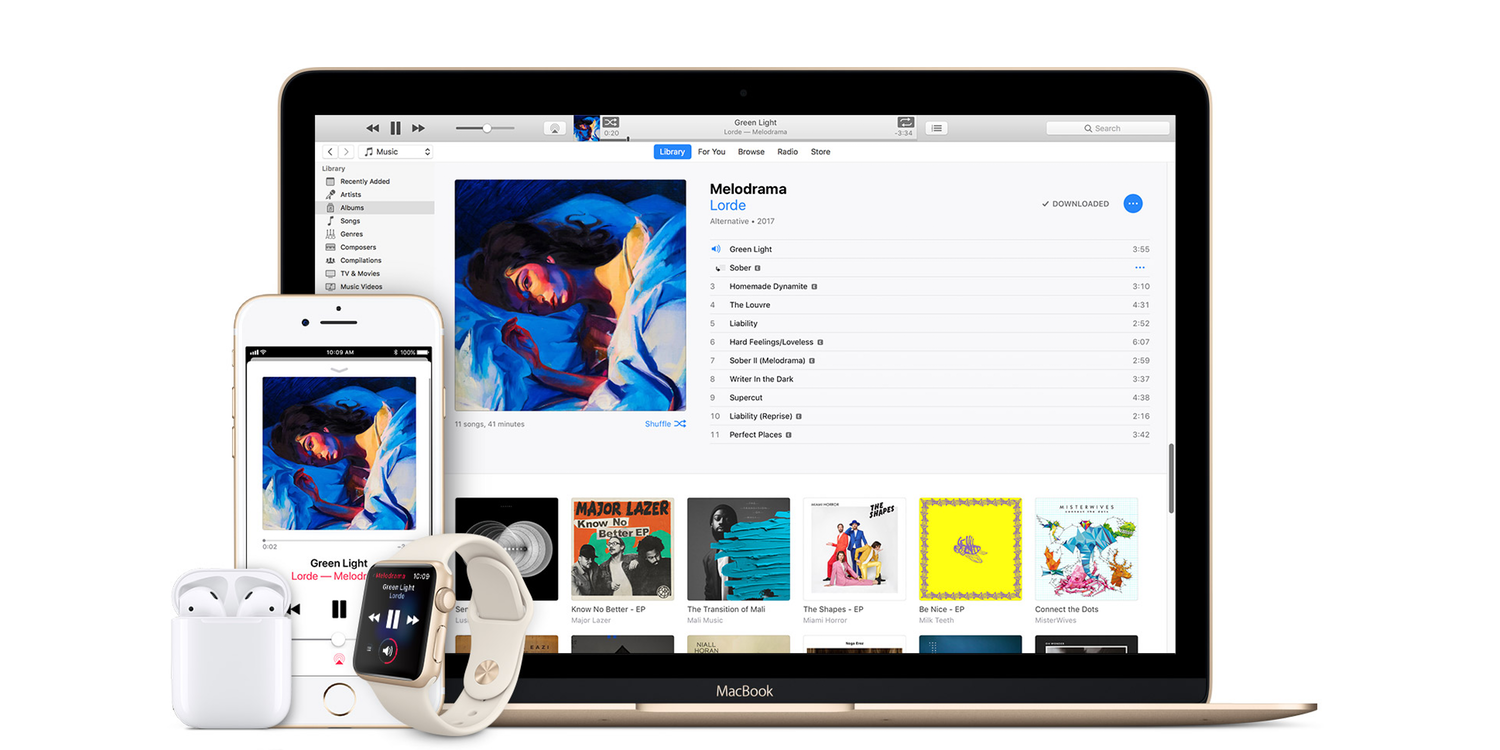 Here are a few things Apple does well regarding app design: 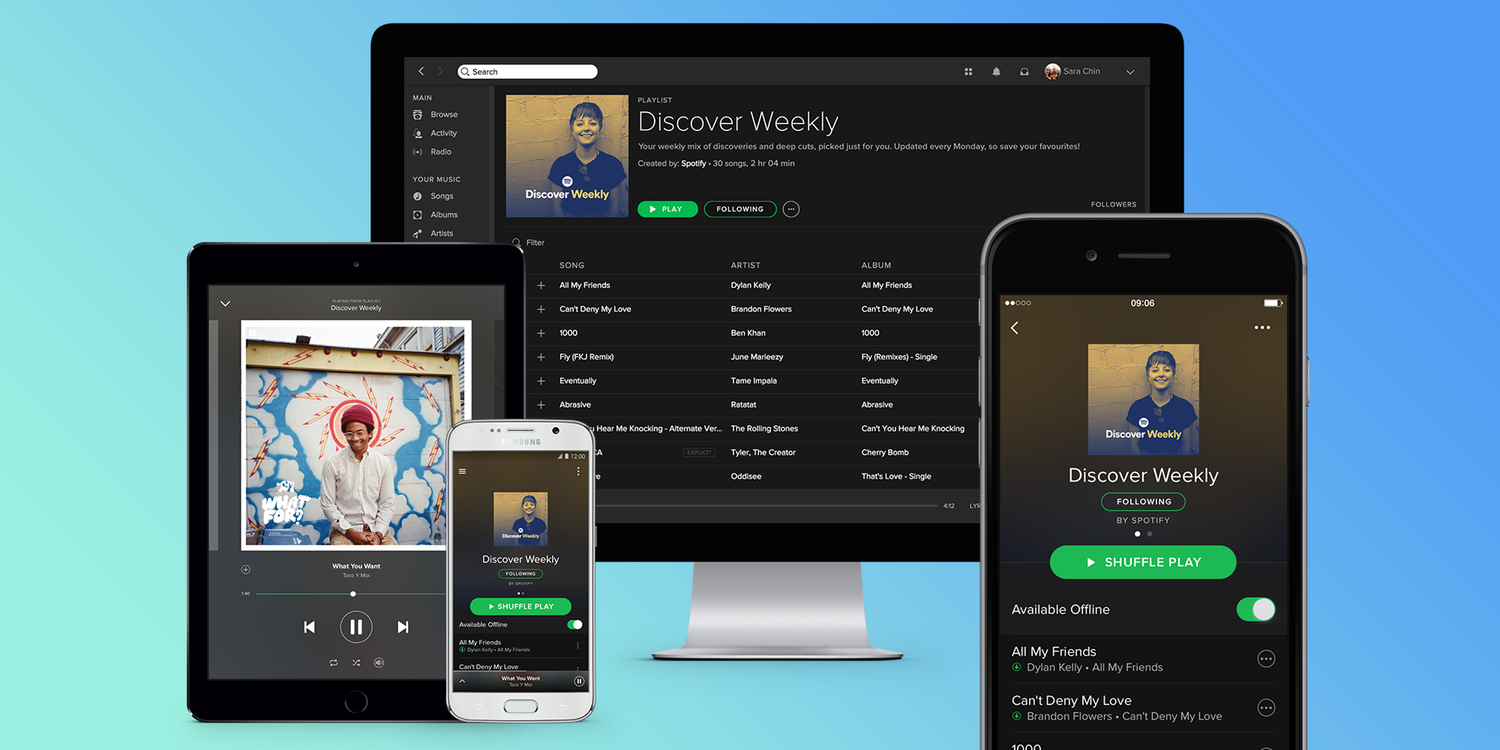 Here are a few things Spotify does well:

I have my pros and cons for both of them. They both are close to perfect, but just place priorities on different things. I wish Apple’s For You section was laid out slightly different. Their overall album section could use a lot of work (see Benjamin Mayo’s article). In Spotify, my number one complaint is that if you go to Your Library > Artists, tapping on said artist shows you all the songs you have saved. This section should take you to an album page. It’s clear Spotify would prefer you listen to a playlist or just shuffle that artist’s entire catalog. 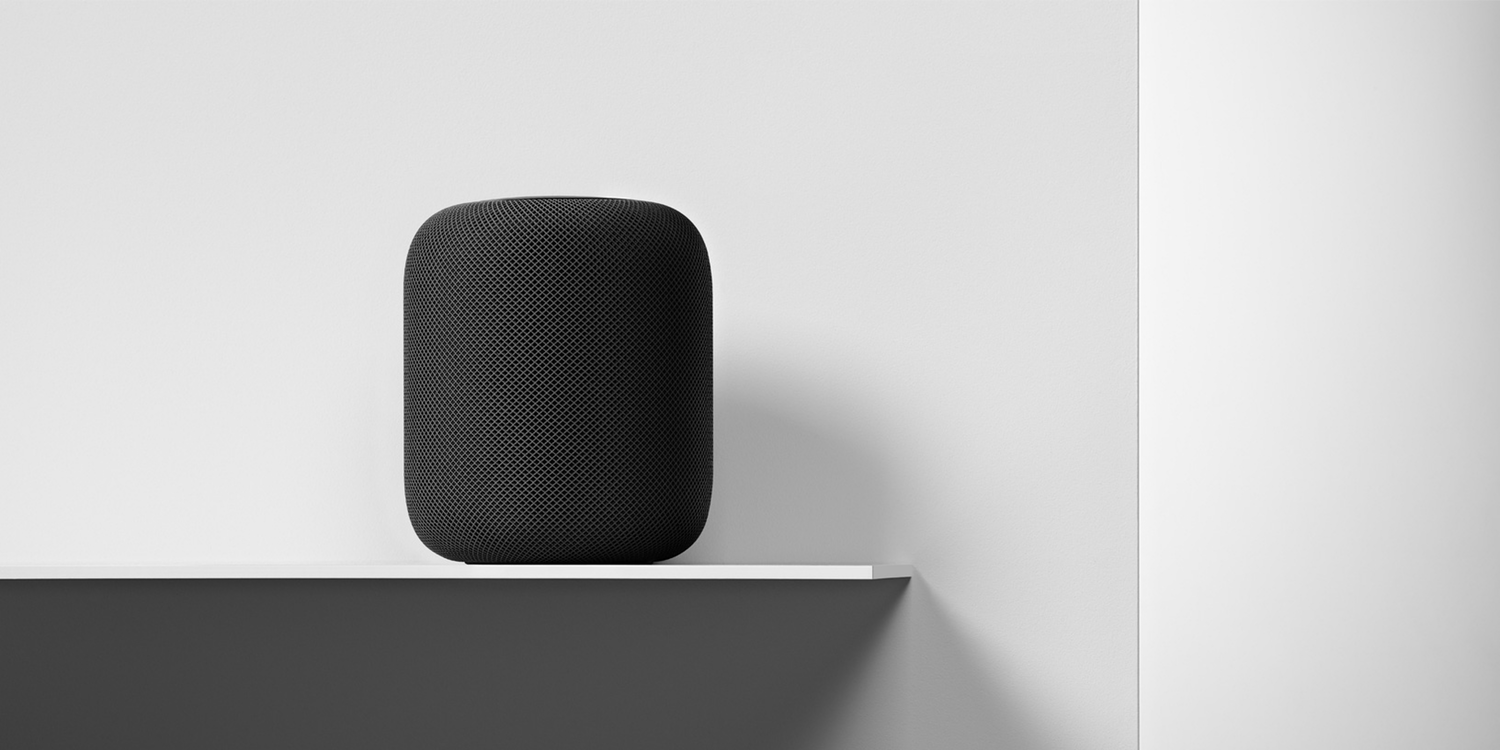 From a hardware support perspective, you could argue both are excellent. Apple Music excels if you are firmly in the Apple hardware ecosystem. If you have Apple TV, HomePod, and Apple Watch, Apple Music has a definite leg up on Spotify. If you use Amazon Echo devices, Spotify is well-integrated. Apple Music is on everything Apple, and Spotify is on just about everything non-Apple. Both services work with Sonos, but Spotify’s integration is a little bit better in my opinion. You can use the Spotify Connect protocol inside the native Spotify app, but Sonos has a custom Apple Music interface inside its app. 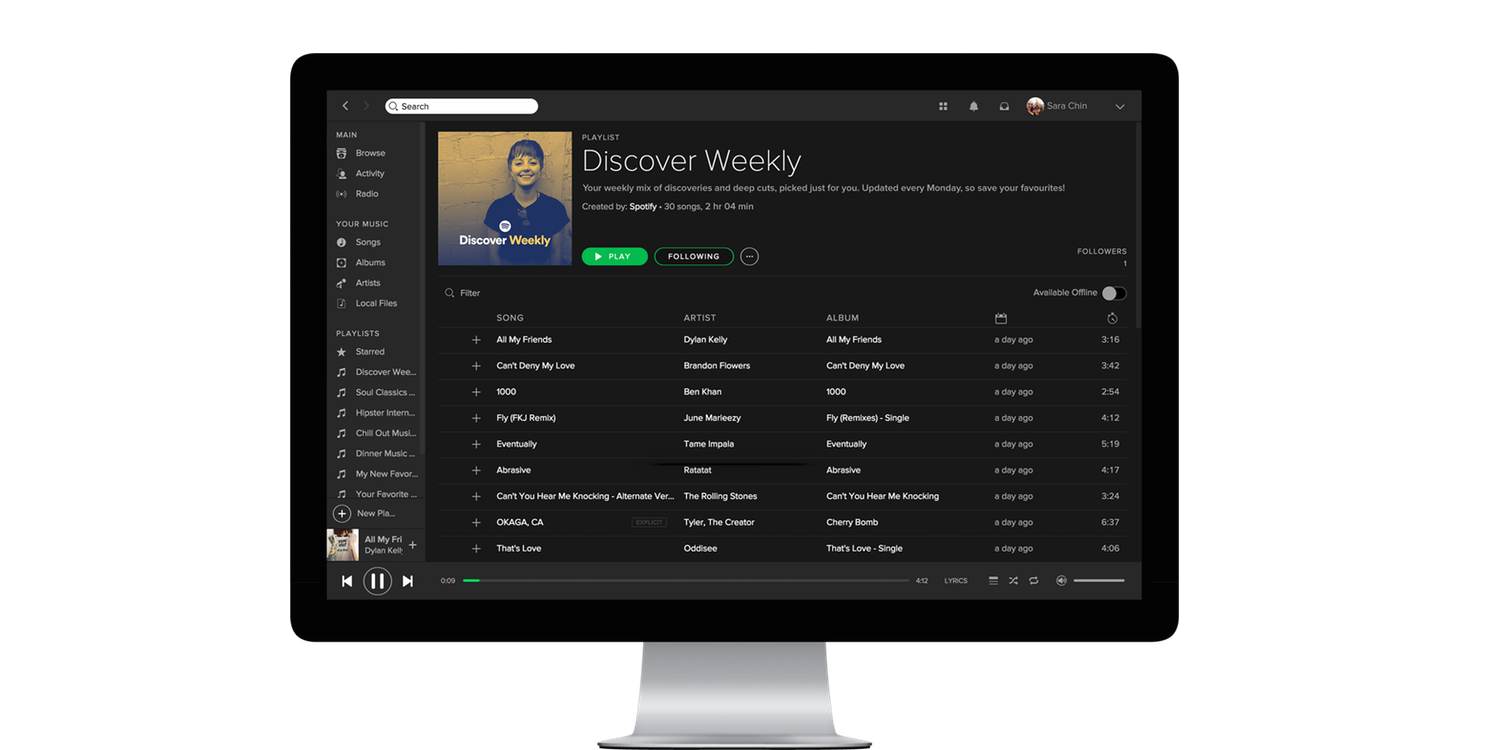 I saved this section for last because I think it’s critical for a lot of people. Here’s the thing, Spotify’s Discover Weekly is the best recommendation engine I’ve ever seen. If you are curious how it works, watch the video below.

Apple has a couple of personalized playlists that update weekly. The first is New Music Mix. It’s similar to Discover Weekly, but not as good. The Favorite Mix is a collection of songs you’ve favorited. Chill Mix is similar to your New Music Mix, but with more relaxing songs. It’s not that they are bad, but it’s just that Spotify’s are so spot on. This conclusion is obviously personal to me, and you may feel differently. All I know is that Spotify seems to recommend new music that I end up saving to my library more than Apple does.

There is no wrong answer. I think both services are amazing, and it’s going to come down to a few things. I’ve spent a lot of time with both services, and it’s hard to look at Apple Music vs Spotify and pick a clear winner. It’s just going to depend on your circumstances.

Do you want Apple Watch support? Do you want a native Apple TV app? Do you have/plan to buy a HomePod? If you answered yes to any of those, go with Apple Music.

Do you prefer playlists over complete albums? Do you want Amazon Echo support? Do you have a Sonos system? If yes, I’d say Spotify is the best pick for you.

One thing I haven’t mentioned until now is Siri support. Apple Music has relatively deep Siri support, where Spotify is just now beginning to roll out voice support. While I only use it in the car, Siri support for Apple Music is a pretty significant feature.

I love both services, and both are worthy of your money. I think for the person who sticks to mostly Apple services, Apple Music is a great solution. Spotify offers a free version so you could use it for the great playlists and use Apple Music for everything else. Apple Music also offers a three-month free trial. Give both of them a shot to see which one fits you best. For most people, it’s just going to come down to personal preference when choosing between Apple Music vs Spotify. If you want to swap between the two, check out Tune My Music.

Can Spotify survive being independent against companies who don’t have to make a profit in the music business (Apple, Amazon, etc)? Scott Galloway of L2, Inc. thinks Spotify is the 5th Horseman. He also thinks that Apple Music is growing faster than Spotify because it’s abusing monopoly power. CIRP recently reported that Spotify’s US churn rate has increased, and it said Apple Music was the reason. On the other hand, they recently hit their subscriber targets. Apple is said to have more paying US subscribers now.

What do think you?

Which do you prefer? Let me know in the comments (and include why).