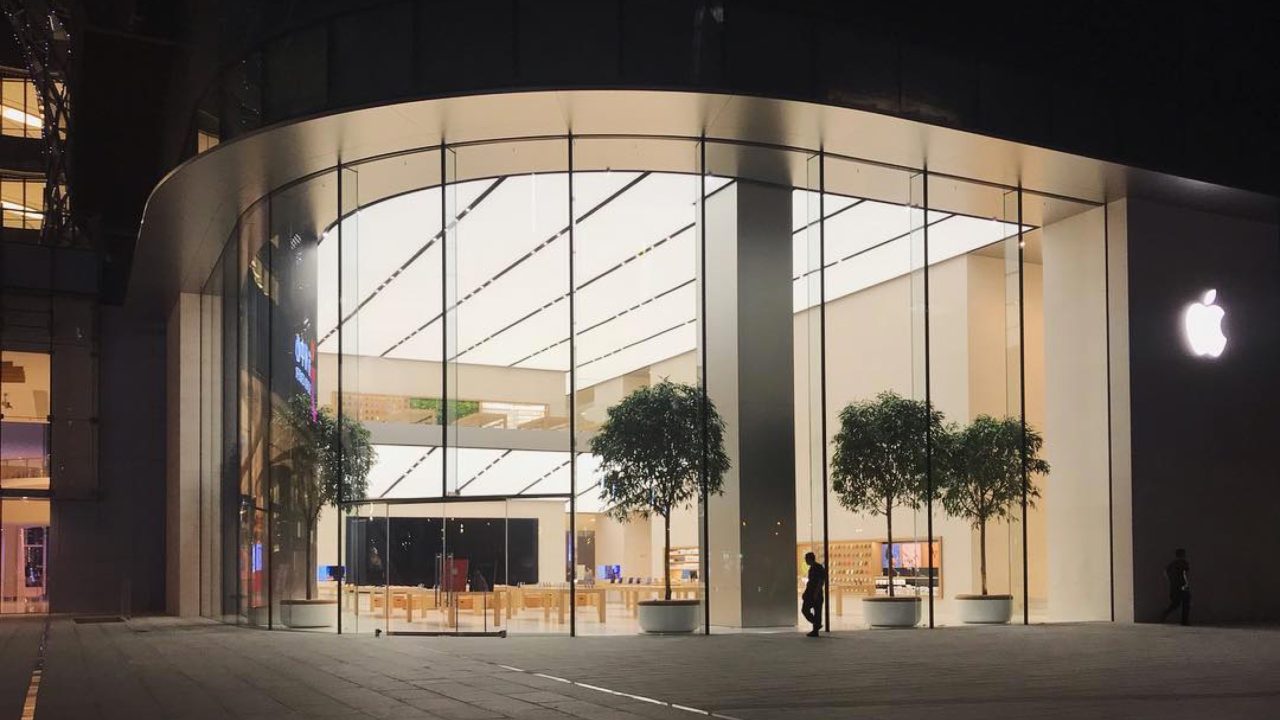 As customers around the world begin to receive their iPhone XS and Apple Watch Series 4 orders today, Apple is also celebrating a launch day for its largest product: retail stores. Apple Suzhou, the company’s 505th store, opened its doors for the first time overnight in China to an enthusiastic crowd. Fans lined up not only to get their hands on the latest iPhones, but to be among the first to explore the massive new store. In the United States, Victor, New York customers were similarly treated to an admittedly more modest store at the Eastview Mall.

Apple Suzhou is hard to miss, positioned at the entrance to the busy Suzhou Center Mall and outlined by massive sheets of curved glass. Behind the store towers the Gate to the East skyscraper, a focal point in the city on the banks of Jinji Lake. The tower’s arched frame naturally guides your eye to Apple’s space below.

600 brands join Apple at Suzhou’s largest mall, which opened last November. As the city grows to become an increasingly affluent business hub, demand for retail space – and Apple’s services – have followed. Residents have closely watched and documented construction of the new store for months, even as Apple remained silent on the matter until earlier this month.

As construction barriers fell, stark red wrappings embossed with a silver Apple logo teased the store’s imminent arrival. A grand opening date was left to speculation until September 12th, when Apple announced that the iPhone XS and Apple Watch Series 4 would go on sale the same day.

Apple Suzhou is the company’s second store to open in China in 2018 after Apple Cotai Central in June. While each store offers an entirely distinct layout and dramatically different atmosphere, both manage to retain a cohesive brand identity that will be instantly recognizable to anyone familiar with contemporary Apple stores.

Inside, a towering ceiling lofts above the main floor. The store is split vertically near the back by an angled balcony extending like a canopy over the Forum’s Video Wall. Tables reserved for support and service overlook the store below. Access to the Suzhou Center Mall’s interior corridor is provided by way of a curved glass entryway at the rear of the store.

Like in other recent and significant stores, Apple has added signature design elements like indoor trees, a private and luxuriously furnished Boardroom for meetings, and, in a similar style to the recently opened Apple Kyoto in Japan, a stunning staircase with carved stone handrails.

Instead of remodeling the outgoing store, Apple chose to move to an altogether larger location just down the hallway in the same mall. It was just three days ago that the move to the new 9,000 sq. ft. space was made official on Apple’s website following months of construction.

Eastview’s new store is cut from the same cloth as other recently opened mall stores across the United States. Parallel Avenue displays line both sides of the store, and a Video Wall is centered in the back, surrounded by Forum seating. Mall store styling has become standardized since Apple introduced the current design almost three years ago to the day on their own campus at Apple Infinite Loop, but the repetition has not cheapened the look. Residents of Victor and surrounding communities who frequent the store will almost certainly appreciate the more relaxed atmosphere and additional space provided by the move.

This past Monday, September 17th, Apple also quietly celebrated the grand reopening of a store in Beijing, China. Apple Wangfujing closed this past June for renovations that we expected to follow a similar pattern to upgrades made earlier this year at Apple Palo Alto. The expectations became a reality when the remodeled space was revealed over the weekend housing a video wall, modern tables, and Avenue displays. Iconic elements like the spiral glass staircase and massive exterior video display remain.

Although the location is relatively new by Apple store standards – it first opened to much fanfare in 2012 – Apple’s renovations are part of an ongoing plan to bring the best Today at Apple experience to every store. While the remodeled store surely wouldn’t pass for an altogether new space, it does feature a few new and unique touches. A double wide leather bench provides a place to wait and rest in front of a living wall. On opening day, Apple featured a fun, pixel art-themed Today at Apple graphic on the video wall. 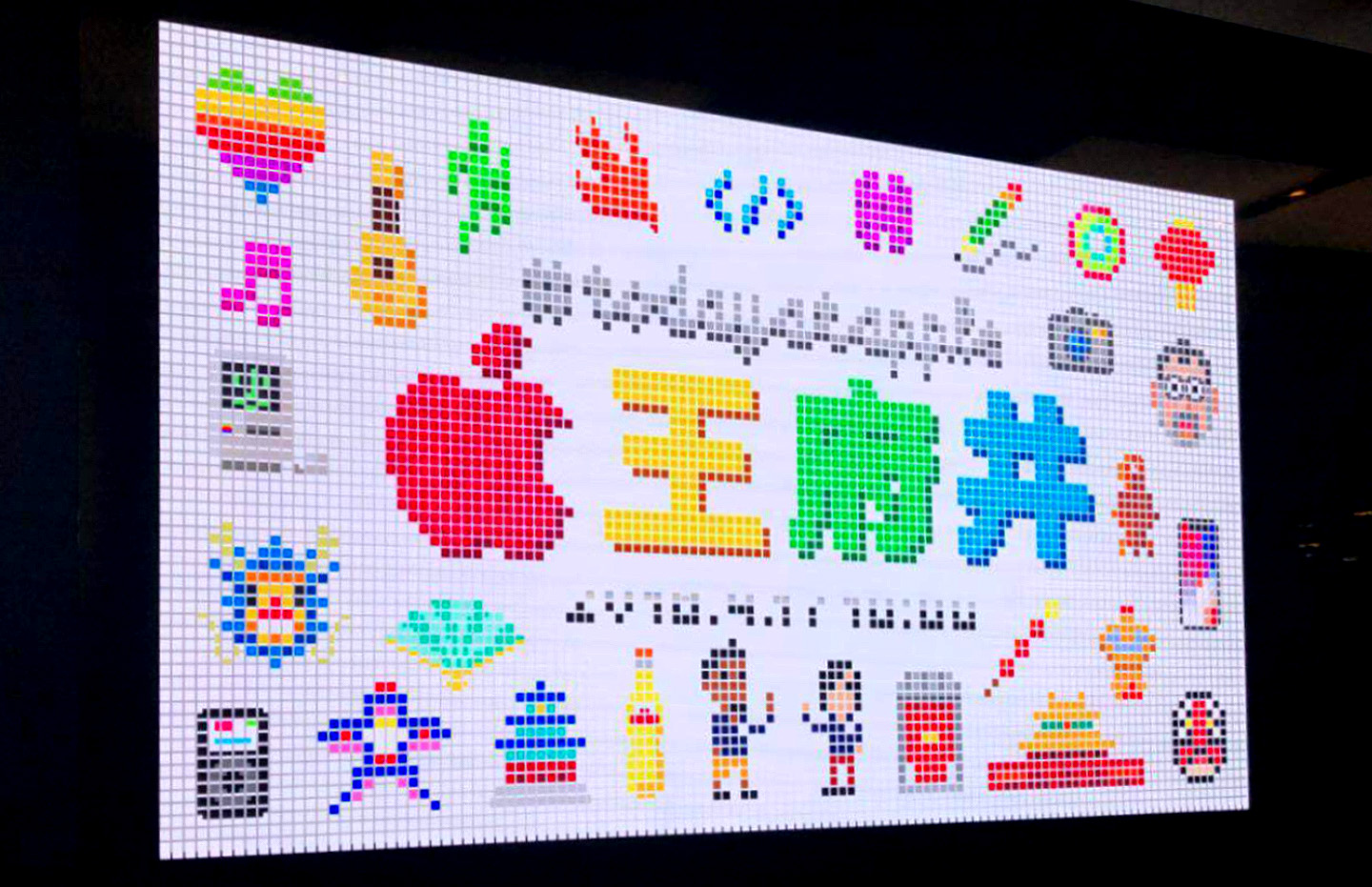 Apple retail has had a busy September, and the excitement is not done yet. On September 29th, Apple Green Hills in Nashville, Tennessee will reopen after lengthy renovations, and Apple Biltmore will move to Scottsdale, Arizona, where construction is wrapping on an incredibly relaxed new store. More store moves should be announced soon. We also learned this month that Apple’s upcoming global flagship store on the Champs-Élysées in Paris will open in November.

Finally, just after last week’s keynote, Apple rolled out new graphic panels and feature bays to stores, beginning in the United States. The new feature bays include stunning 3D iconography and should be on display at most locations by now.

As always, we welcome your photos from store openings. Follow along with 9to5Mac’s retail guide for more Apple store news.