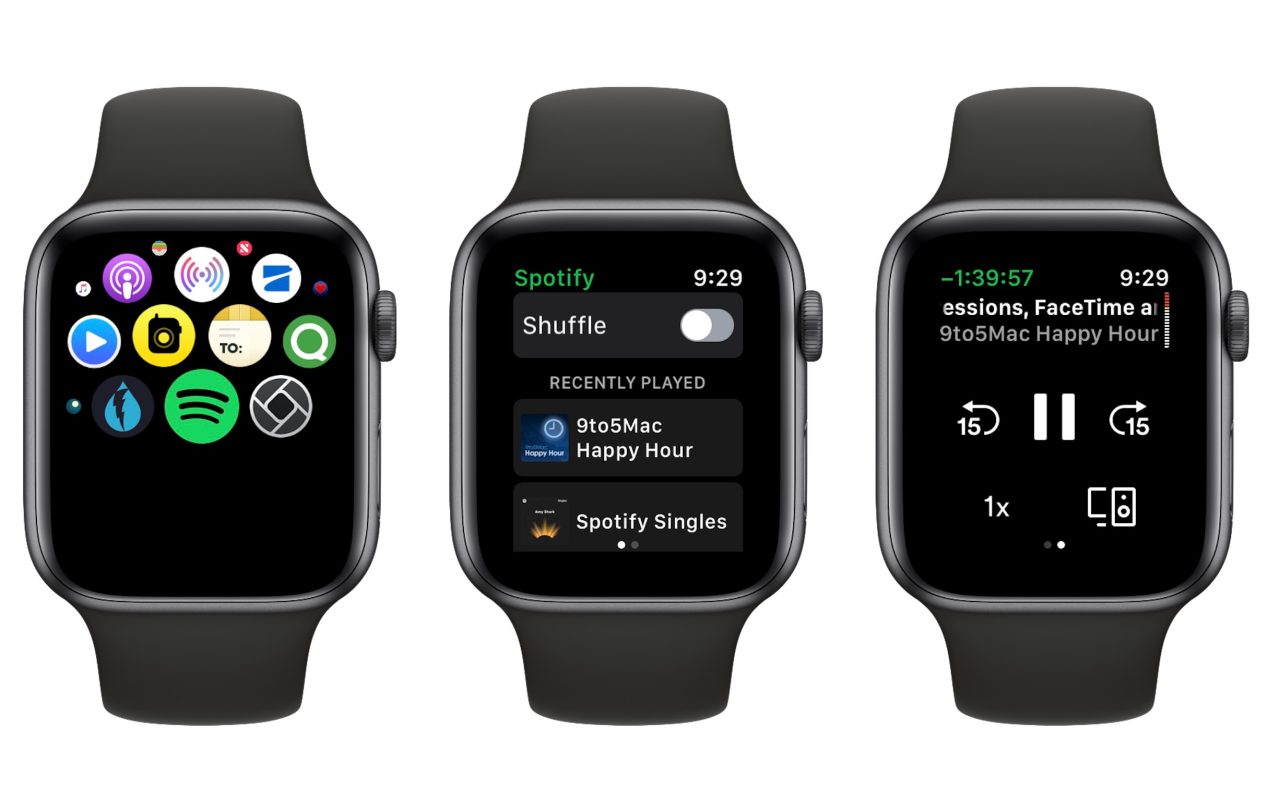 Spotify has released what it describes as the ‘first version’ of its new Apple Watch — suggesting more features will be coming in a future version. Spotify for Apple Watch first surfaced earlier this month when TestFlight beta testers spotted the pre-release version with limited features.

Starting today, Spotify for Apple Watch is now available on the App Store as part of version 8.4.79 with these release notes:

We’re always making changes and improvements to Spotify. To make sure you don’t miss a thing, just keep your Updates turned on.

– This release includes the first version of our Apple Watch app

Simply update Spotify for iPhone and the new app should appear on the Apple Watch (or toggle the new app on if auto-installation is turned off).

Spotify for Apple Watch won’t replace the streaming music and offline playback features of the Apple Music app just yet however. The new app is limited to remote playback control from the Apple Watch to the iPhone.

Hopefully a future version of Spotify on watchOS adds more features like offline playback now that watchOS 5 enhances how audio apps like Overcast and Audible handle podcast and audiobook playback after syncing. Prior to Spotify for Apple Watch launching, third party developers have been able to achieve offline music playback using the service on older versions of watchOS.

Also rather comically, the new Spotify app isn’t optimized for the Apple Watch Series 4 display sizes introduced in September … add that to the list of future features customers will want (in addition to an Apple TV app).

In the meantime, an alternative recommendation:

So… I made a Spotify player for Apple Watch. Primarily to prove it’s possible (and allowed?) to provide music streaming functionality on watchOS with existing APIs 😊 https://t.co/lCjAvrBr1T

We’re constantly on the go—whether bouncing between the gym, work, school, errands, or just chilling—and our smartwatches are the tool to help keep us up to speed. Today, Spotify is introducing a new app for the Apple Watch, giving you the ability to seamlessly access and control your favorite music and podcasts without missing a beat.

We know the importance of having music on the go, which is why we’re excited to bring a new Spotify app to our highly mobile users on Apple Watch. With this new app, users can enjoy an improved experience with better control and the ability to seamlessly connect to your speakers or devices. And while we continue to innovate, we have many exciting things coming up —including the ability to listen to your music and podcasts offline.

More activities—more control Smartwatches let us access the world with a flick of our wrists. Ready to start your run? Hit play from your Apple Watch without having to wrangle your phone out of its running case. Running into a friend as you head into the grocery store? Tap pause to grab a cart and a chat. Not feeling a slow song during your birthday party? Skipping to the track that matches your mood and activity is now as easy as checking your notifications. Or, while listening to your favorite podcast, easily rewind 15 seconds to catch that detail you missed. It’s all right there on the watch face. Speaking of parties, easily connect your speakers or devices via Spotify Connect to effortlessly DJ from your watch.

Easier access—easier discovery The new integration with Apple Watch makes accessing your recently played songs simple, even with your phone in your pocket. Plus, if you find a new favorite track while on the go, just tap the ♡ icon on your watch screen to save it to your collection—and then feel free to stream it over and over again. This new experience will be rolling out to Apple Watch users over the coming week. Make sure that you have the latest version (v.8.4.79) of Spotify, or download it on the App Store—and look out for more updates coming soon.