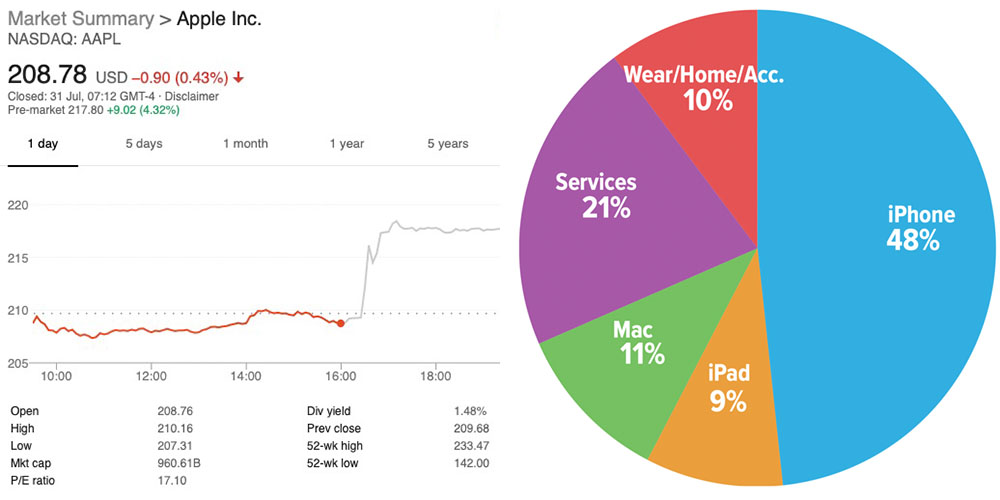 AAPL stock is up more than 4% in pre-market trading after the company yesterday announced its Q3 results, despite iPhone revenue falling in both cash and percentage terms.

Earnings for fiscal Q3 (calendar Q2) were slightly higher than expected, at $53.8B. This was a little above the midpoint of Apple’s own guidance of $53.5B, and above analyst expectations of $53.39B. However, that wasn’t the only reason for the market reaction …

CNBC financial host Jim Cramer had yesterday suggested that AAPL stock could rise even if the results were as expected, simply by defying the more pessimistic forecasts. In the event, the combination of a slightly better Q3 and notably higher guidance for Q4 seems to have energized investors.

Additionally, Tim Cook announced that Apple had finally returned to growth in China after a difficult time there.

I’d like to provide some color on our performance in Greater China, where we saw significant improvement compared to the first half of fiscal 2019, and return to growth in constant currency. We experienced noticeably better year-over-year comparisons for our iPhone business there than we saw in the last two quarters, and we had sequential improvement in the performance of every category. The combined effects of government stimulus, consumer response to trade-in programs, financing offers, and other sales initiatives, and growing engagement with the broader Apple ecosystem had a positive effect. We were especially pleased with a double-digit increase in Services driven by strong growth from the App Store in China.

iPhone revenue falling below the 50% mark

Yesterday’s news wasn’t all good. The iPhone has always been Apple’s biggest cash-cow by far. That remains true, but for the first time since 2012, the iPhone accounted for less than half of the company’s revenue, at 48%.

And that isn’t just because other categories are growing (though they are): it’s because iPhone revenue is falling in real terms. Jason Snell has put together his usual excellent charts over at Six Colors, and two of them tell the iPhone story. First, the four-quarter revenue average: 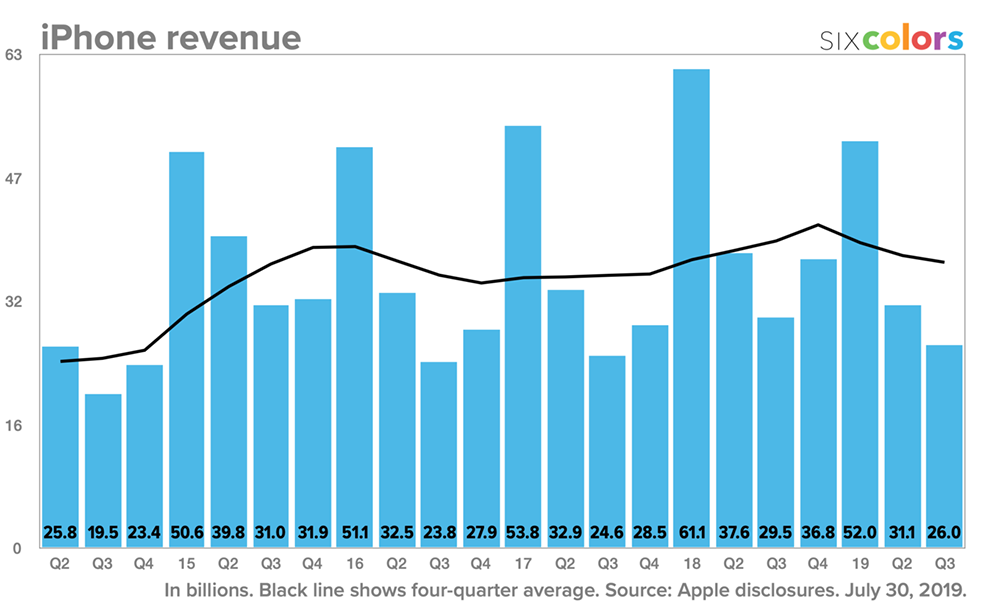 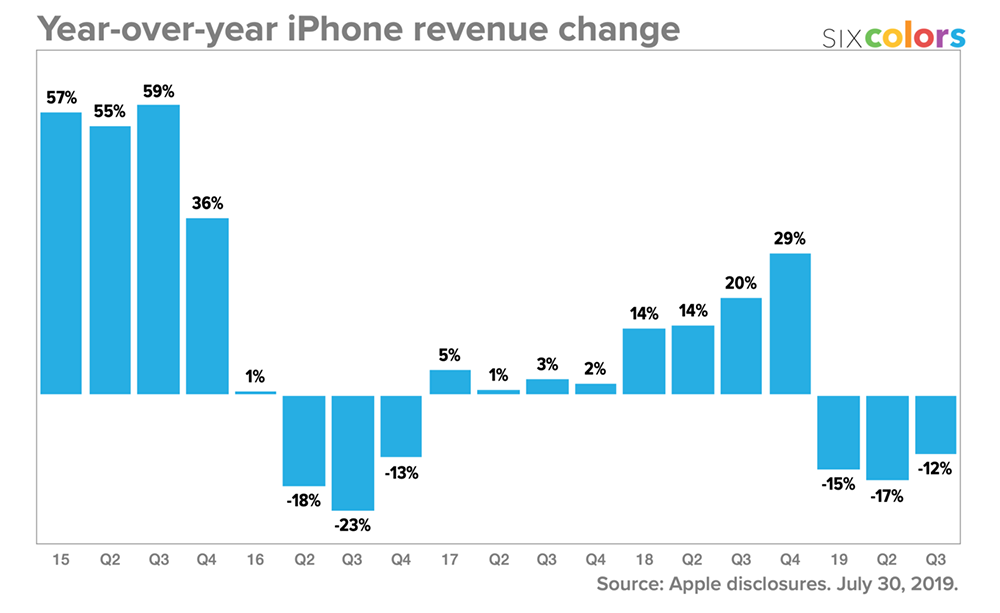 But all other product categories growing

The good news, however, is that everything else is up — with particularly dramatic growth in the Wearable/Home/Accessories category, which includes both Apple Watch and AirPods. Looking at year-on-year revenue changes:

The story is the same if you track the percentage revenue by product line, as Snell has done. Wearables, iPad, Mac, and Services — all up; iPhone substantially down. 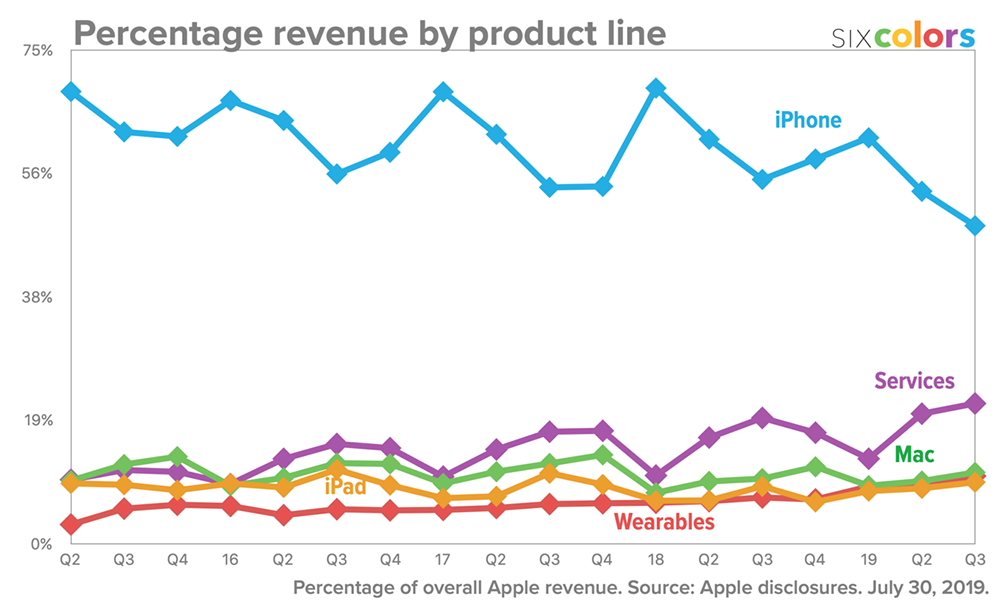 Indeed, Cook noted yesterday that Wearables — the Watch and AirPods — was now a massive business in its own right.

It was another sensational quarter for Wearables, with growth accelerating to well over 50 percent. We had great results for Apple Watch, which set a new June quarter revenue record and is reaching millions of new users. Over 75 percent of customers buying Apple Watch in the June quarter were buying their first Apple Watch.

We continue to see phenomenal demand for AirPods. And when you tally up the last four quarters, our wearables business is now bigger than 60 percent of the companies in the Fortune 500.

Check out the rest of Snell’s charts over at Six Colors.

While some are suggesting that the percentage fall in iPhone income is a positive thing, reducing Apple’s dependence on a single product, others disagree. As Axios argued:

With its latest earnings numbers, Apple proved once again that its growing services and wearables businesses can help lead the company to record financial results even as iPhone sales fall short of prior years. The catch: These new businesses are still tied at the hip to the iPhone […]

These product lines don’t represent wholly independent new businesses. Rather, they are smart extensions of the iPhone franchise, and a way for Apple to derive additional revenue from a base that isn’t growing.

This strategy is a creative way to manage through a maturing smartphone market, but Apple’s business is arguably just as dependent on the iPhone as it has ever been, perhaps more so.

As an aside, there will probably be some headlines today stating that Apple is once more a trillion-dollar company. That’s unlikely to be the case after factoring in the reduced number of shares after the $17B stock buybacks revealed yesterday. As a result, there are almost 88 million fewer Apple shares than before.