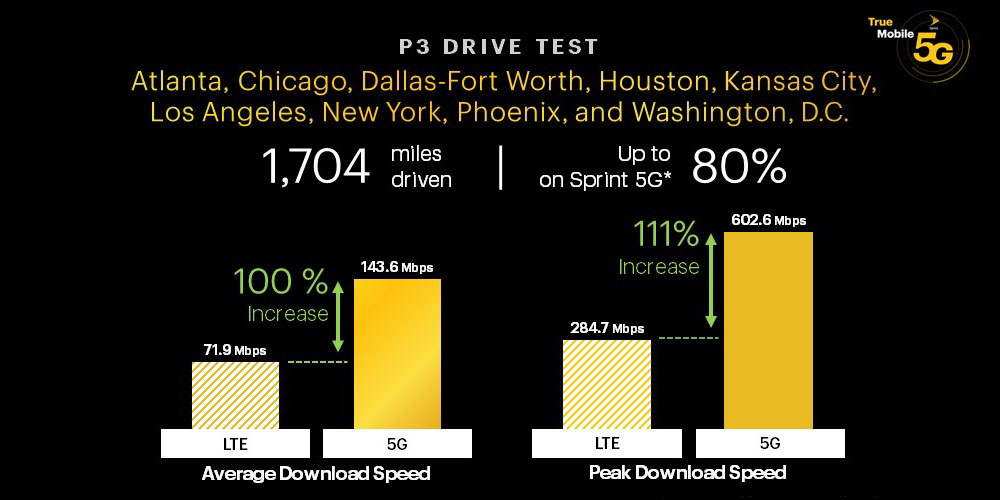 Sprint 5G service now reaches a total of around 16M people, claimed the carrier today. Although it has not added any new cities to its coverage, it says that it now offers 5G service in more places within each of the nine cities in which it is available…

The company says this is up from 11M people.

“It’s exciting to expand our footprint and see customers experience True Mobile 5G for the very first time in some of the biggest cities in the U.S.,” said Dr. John Saw, Sprint CTO. “We’ve been working hard to increase 5G coverage inside our nine cities and build a showcase experience for our customers, but this is just the start, showing the power of what we can achieve with T-Mobile. Together we’ll build a better, faster, nationwide mobile 5G network that unleashes this performance across the entire country to benefit all U.S. businesses and consumers.”

Sprint provided varying levels of detail about the expanded footprint.

For example, in New York, service has expanded to more parts of the Upper West Side, Harlem, and South Bronx; new parts of Queens and Brooklyn, as well as Paterson, Lodi and East Orange in New Jersey. In Los Angeles, 5G is now available in new areas such as Torrance, Southgate, Lancaster and Buena Park. The company has lit up new places in the greater Washington, D.C. area including Fort Dupont and Deanwood, parts of Bladensburg and Fairmont Heights in Maryland, and parts of Bailey’sCrossroads and George Mason University in Virginia. In Phoenix, customers can now experience Sprint 5G around more parts of ASU, at Chase Field and in Mesa; while Atlanta service has been expanded from College Park to Alpharetta, and from Marietta to Lawrenceville. Service has also expanded into portions of Garland, South Dallas and Plano in Dallas-Forth Worth; and has expanded to more Northwest and South parts of Houston.

The company points to an independent test that appeared to show excellent Sprint 5G coverage.

In a drive test by P3 covering 1,704 miles within nine Sprint 5G cities, testers found they could maintain a 5G connection up to 80% of the time.* While on Sprint 5G, testers clocked an average download speed of 144 Mbps and a peak download speed of more than 600 Mbps.

However, the asterisk there is because the overall average was 65%, and the tests were conducted following 5G coverage routes provided by Sprint.

The drive-by test showed rather different results: speeds were only twice as fast. The rule of thumb with 5G appears to be to take all carrier claims with a large dose of salt.

Sprint argues that its proposed merger with T-Mobile will accelerate the rollout of 5G.

It’s expected that all of Apple’s 2020 iPhones will offer 5G, using Qualcomm radio chips as the Cupertino company works on developing its own 5G chips by 2022.