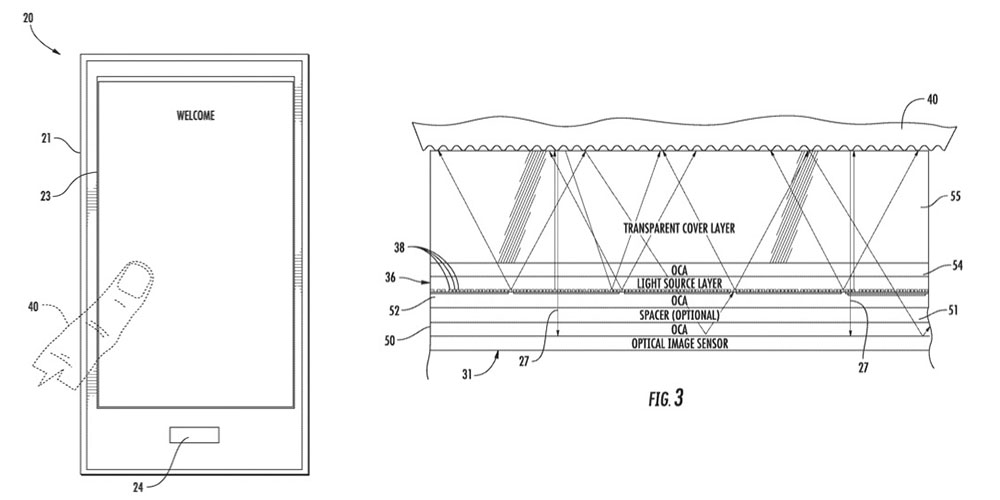 Apple has today been awarded yet another patent for a form of under-display Touch ID. This would be another step forward in the company’s long-held ambition of ‘a single slab of glass,’ without bezel or notch.

Long-time Apple design head Jony Ive long said that the company’s ultimate design goal for the iPhone was to have it be ‘a single slab of glass.’ Indeed, we’ve even seen an Apple patent for an iMac with a similar ambition.

The iPhone X was, said Ive, a major milestone toward that ambition. By eliminating the Home button, it enabled the front of the phone to be almost all display, but the Face ID components do require a notch at the top of the display which was carried through to the iPhone 11 and is expected to be unchanged in the iPhone 12.

A true all-screen front would require either Face ID or Touch ID components to be embedded beneath the display, and Touch ID so far appears the more promising approach.

Apple already has a long list of patents for different approaches to this:

To lose the notch altogether, Apple would also need to embed other circuitry into the screen, and again has patents for doing so with things like the light sensor, and there is very early tech out there even for embedded cameras.

Today’s patent was spotted by Patently Apple. One key aspect here is that the sensor could be quite large, enabling a fingerprint to be recognized over much of the screen, rather than your finger to be positioned in a specific place.

As Apple explains, this would not only make it easier to unlock a phone, but could make in-app authentication a much more seamless experience than having to reposition your finger.

For example, instead of tapping to open your banking app, and then having to move your finger to a specific section of the screen, your fingerprint could be read as you tap the app. It would unlock automatically as soon as it opens, just as happens with Face ID today.

We generally caution that Apple patents a lot of things it never brings to market, but in this case the combination of a long line of patents for under-display Touch ID, a long-held ambition to eliminate the notch, and the possibility that we may be wearing face masks for some time, makes this seem an extremely likely bet for a future iPhone.

Incidentally, don’t be mislead by the patent image seemingly have a (rectangular) home button: Apple generally uses very old-fashioned looking generic illustrations in its patents, likely to avoid giving away its design plans.