Hands-on with Adobe Illustrator on the iPad 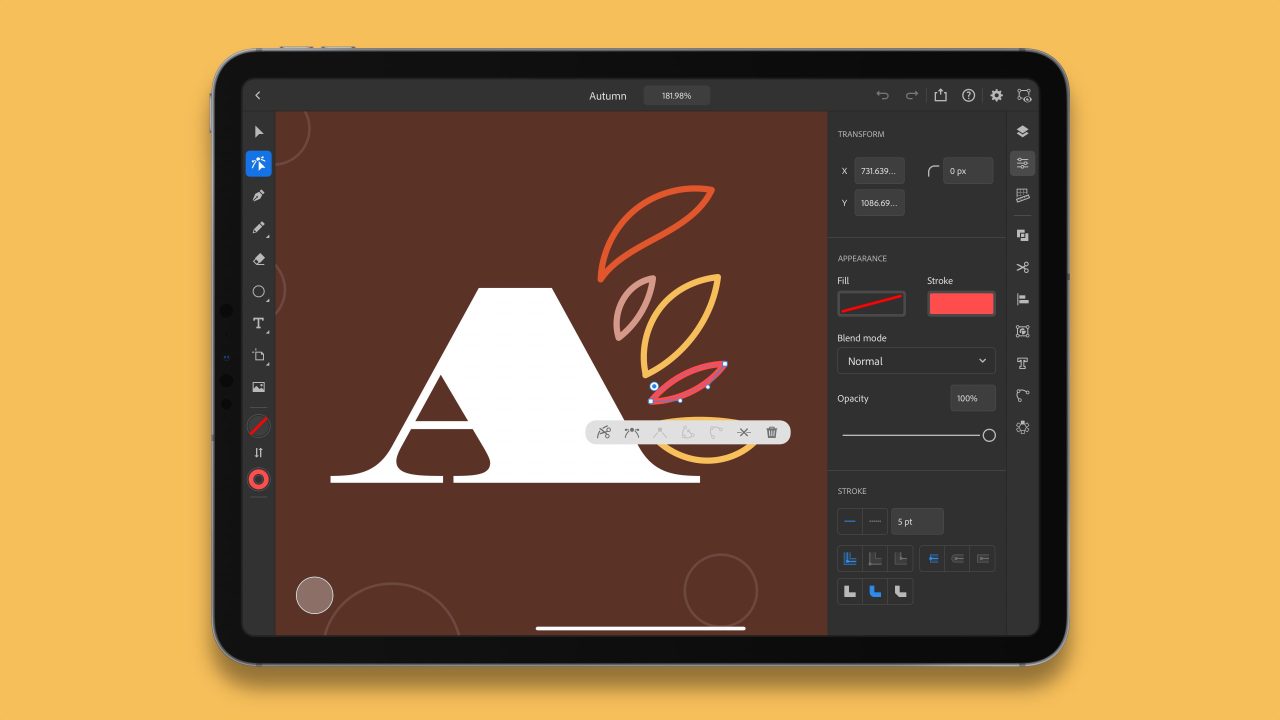 I use Adobe Illustrator almost every day on my Mac to create many of the graphics, podcast covers, and feature illustrations you see here on 9to5Mac. When Adobe announced last November that Illustrator was coming to iPad, I was both thrilled and a bit skeptical. Could an Apple Pencil and touch display provide the same level of precision as a keyboard and mouse? I’ve been testing Illustrator on the iPad for the past two weeks to find out.

Adobe’s strategy for bringing its desktop apps to the iPad crystalized with Lightroom and Photoshop. Instead of porting decades of legacy features and controls, each app is built from the ground up for touch input and progressive disclosure, allowing complex functionality to live inside an easy-to-use interface. This approach means that version 1.0 of each app will be missing some key features, but the long-term reward for users is greater. Illustrator follows the same pattern.

I was pleasantly surprised when I opened Illustrator on the iPad to find that there were too many features for me to realistically assess in detail. Photoshop on iPad’s early reviews suffered at the hands of customers frustrated by its limited toolset, even though Adobe promised and delivered on frequent updates.

Instead of sprinting through every feature, I decided to build a workflow around two areas of Illustrator that Adobe is especially proud of: the new Repeat tool and rich typography support with Adobe Fonts. In testing these features, I set a challenge representative of a fast-paced, modern design environment: create a unique, eye-catching image in no more than about 45 minutes. Your iPad can go anywhere, so Illustrator should be optimized for quick turnaround projects.

Like all of the latest Adobe apps, Illustrator on the iPad uses cloud documents stored in your Creative Cloud account. You can import files from iCloud Drive and the Files app, too. Illustrator’s interface is similar to Photoshop and Fresco on iPadOS, with tools on the left, controls on the right, and the Touch Modifier shortcut floating onscreen for secondary contextual control.

I dove into typography first, checking out some of the over 18,000 fonts available with a Creative Cloud subscription. All of the fonts I’ve added on my Mac over the years instantly appeared for me to use. Font support has been one of my biggest barriers to using iPadOS for design work until now. Even apps like Affinity Designer, which boast a more powerful and comprehensive feature set than Illustrator, can’t compete in terms of typography.

Common type settings like size and letter spacing are revealed in a hover menu that appears when you tap on a text box. Further controls live inside the properties panel on the right. This same general hierarchy applies to shapes, paths, and just about every other object on an artboard.

I decided to use individual characters as graphic elements to build patterns, so I outlined my type to turn it into vector shapes. As editable objects, I have full control over the anchor points and bezier curves using an Apple Pencil, my finger, or an iPad Magic Keyboard and Trackpad. Manipulating points with precision felt more natural than when I picked up the pen tool on the desktop for the first time, in part, because the iPad makes it easy to quickly zoom far into my artboard.

Now is a good time to mention that Illustrator on the iPad has support for freeform gradients with multiple color stops. The feature is extremely powerful and even relatively new on the desktop, so I assumed it would be saved for a future update. Surprisingly, creating a complex gradient didn’t stress my iPad Pro’s CPU like it does on my MacBook Air. After arranging my type and setting a color theme imported from my Creative Cloud libraries, I had a composition ready for the Repeat tool.

Radial, grid, and mirror repeats are a new feature debuting on the iPad before the desktop. With just a few taps, any object can be transformed into a pattern or intricate design. I’ve spent countless hours on my Mac creating compositions that can now be made in just minutes on the iPad.

Each type of repeat has its own adjustable parameters in the properties panel and functions just like its name implies. Changing one instance of an object will transform every copy in the repeat. Manipulating the size and spacing of a radial repeat can produce mesmerizing results in real time that have me hopeful for a day when After Effects lands on iPadOS. Perhaps the best part about repeats is that they’re stackable — a radial repeat can be repeated again as a grid, for example.

Export options on iPad are still rudimentary at this point, but one of the greatest advantages of the Creative Cloud ecosystem is that documents created on iPadOS can be opened with Illustrator on the Mac for more functionality. Objects with parameters not supported — like repeats on the Mac or effects on the iPad — will be expanded when you open the file.

Illustrator on the iPad still can’t replace my desktop workflow. iPad artists already comfortable with tools like Affinity Designer or Vectornator might feel limited by some of the app’s early limitations. Where Illustrator really shines is within the Creative Cloud ecosystem, and Adobe acknowledges this. Many desktop designers will find the app a helpful companion for quick projects and on-the-go edits. Artists new to digital illustration have a long roadmap of new features to look forward to, and can grow their skills as the app becomes more powerful. Here are some of the future updates Adobe has promised:

You can download Illustrator on the iPad from the App Store today. Existing Creative Cloud subscriptions that include Illustrator will have access to the new app at no extra cost. For new users, a 30-day trial is available with a $9.99/month iPad app only plan. Any iPad running iOS 13.4 or later is supported.

At MAX 2020, Adobe today also released a major update to Illustrator on the desktop, adding the new Recolor Artwork Tool previewed earlier this year as well as features like more precise type adjustments and a 100x larger canvas.