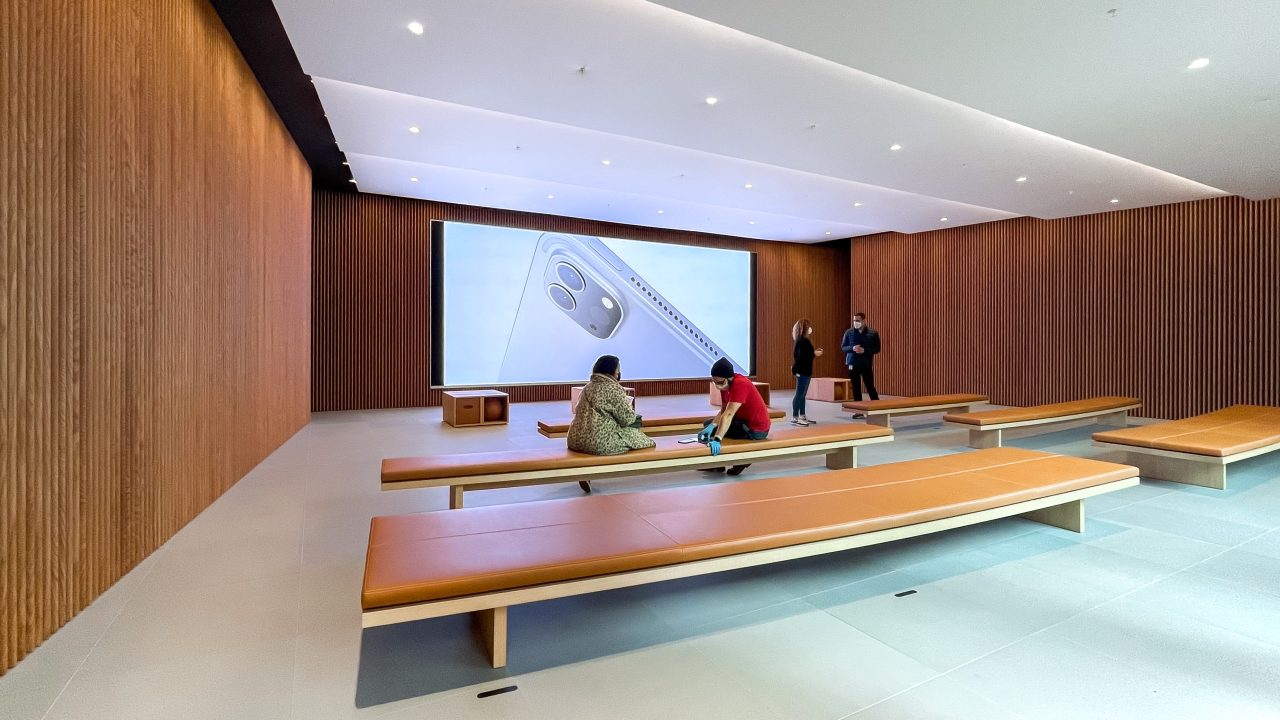 Apple SoHo in New York City recently unveiled an all-new Forum and Video Wall with a striking design that respects the heritage of the original flagship store. The space breathes new life into the store’s former Theater area and will someday host artists and Creative Pros during Today at Apple sessions.

Climb the signature glass stairs at Apple SoHo and you’ll find the bright new Forum. Work to totally reimagine the space began in September and wrapped up in time for the busy annual Apple Shopping Event. The redesign marks several firsts for Apple and offers an experience unlike any other Apple Store in Manhattan.

Vertical wood slats cover the walls in the Forum, warming the space both visually and acoustically. Each white oak slat is sculpted with a custom curved profile and mounted over acoustic insulation covered in fabric.

The Forum’s multilevel ceiling is also covered by stretched fabric and illuminated by cove lighting at the perimeter of each panel. Both designs give a nod to Apple SoHo’s Theater legacy and create definition between the Forum and Genius Bar in the main store area.

Gray carpeting has been replaced with granite floor tile. Theater seats were removed in favor of uniquely curved, leather-topped benches and Forum cubes. Gone is the projection display, upgraded to a bright LED Video Wall framed in polished metal. Not an inch of the space was left untouched.

Forum renovations that modernize classic Apple Stores brought new purpose to 43 locations last year alone, but few have been as grand as SoHo’s upgrade. While the space is quiet today and used primarily for physically-distant Genius Bar appointments, Today at Apple sessions will resume when it’s safe to gather again. Behind the Forum, SoHo joins the ranks of Apple Fifth Avenue and Apple Williamsburg in Brooklyn with a new Boardroom that will welcome creative guests and business customers.

If you’re planning an Apple Store visit, keep in mind that many locations are open by appointment only or offer Express storefront service.