Apple may be able to scale back its advertising budget for the Apple Watch: so far the device appears to be doing just fine in getting multi-page editorial coverage in the world’s fashion magazines. The latest fashion title to run a major feature on the watch is Hong Kong’s East Touch magazine, which is running a four-page spread–and has since made a cover appearance on China’s YoHo! magazine.

The Apple Watch has so far been featured Vogue China, Vogue France, the USA’s Self and the UK’s Style, as well as fashion titles in France and Germany. Apple did, however, have to pay for advertising in the US edition of Vogue. A contributing editor to Vogue also described the Apple Watch as “terrific.”

Check out the other photos from East Touch, and the YoHo! cover, below …  END_OF_DOCUMENT_TOKEN_TO_BE_REPLACED 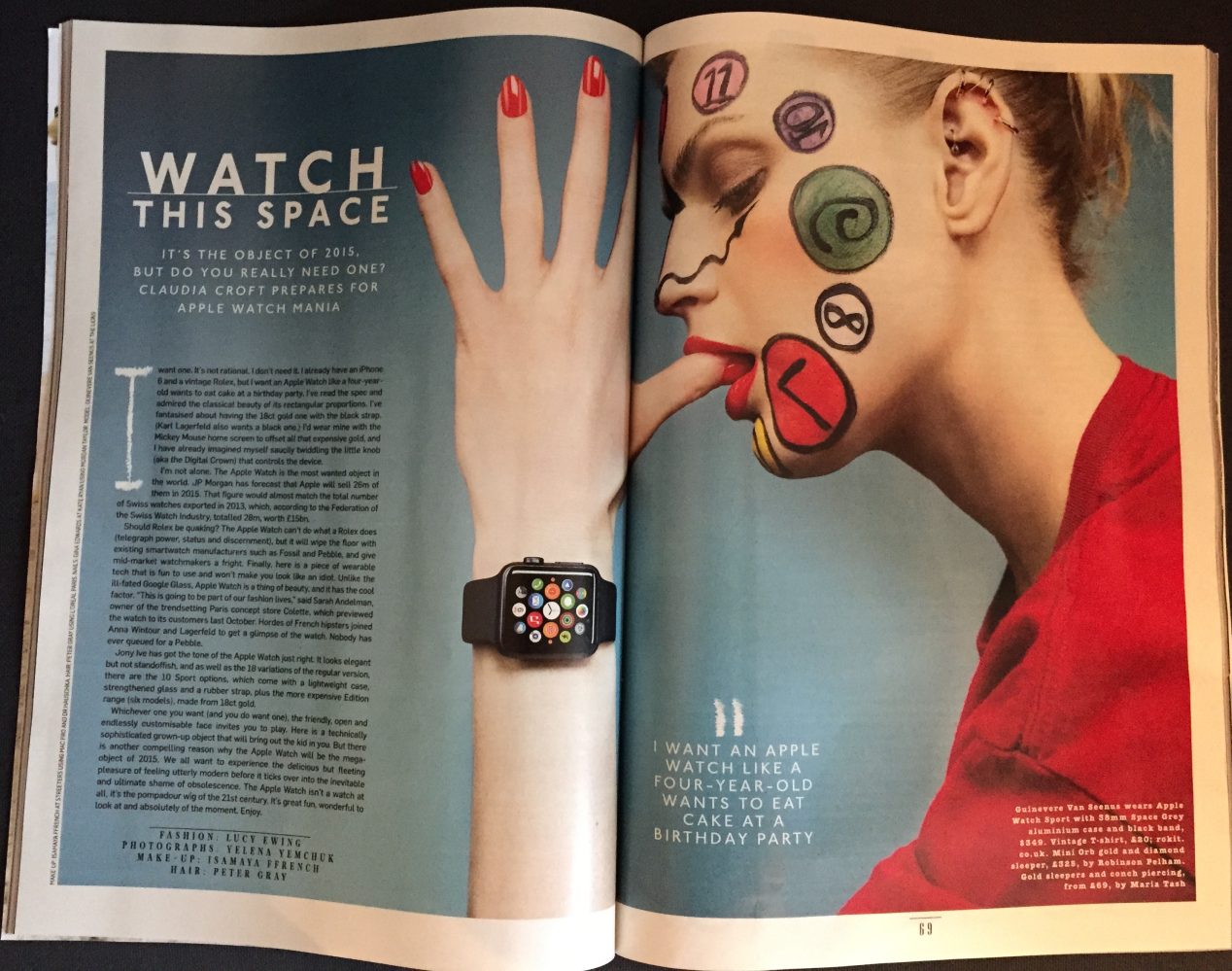 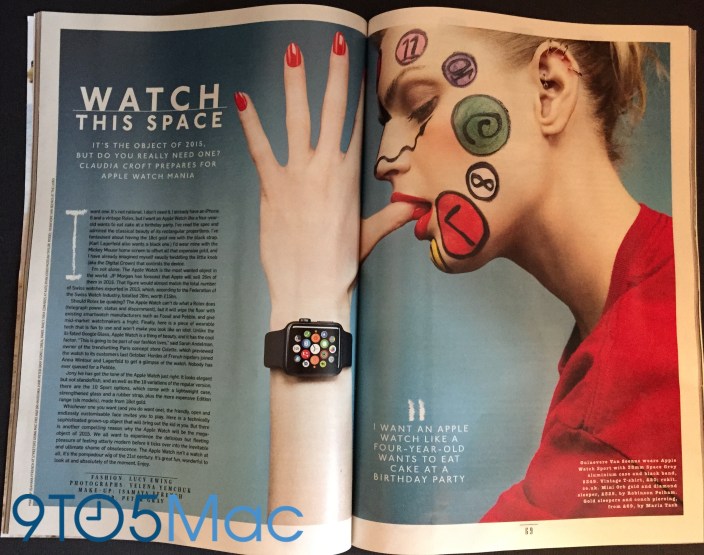 Following from features in fashion magazines in France and Germany, the Apple Watch has made its UK editorial debut in Sunday’s publication of Style. Although the Watch is not on the cover of the issue I received, there are four covers circulating — one of them features the Apple Watch as the cover photo. Regardless of whether you get a copy of the magazine with the special cover or not, inside the Watch gets three pages of press coverage.

The main picture features Guinevere Van Seenus wearing a 38mm Apple Watch Sport with Space Grey case and black sport band. The written accompaniment says that the Apple Watch does not convey ‘power, status and discernment’ like a Rolex can but holds back no punches in saying it will ‘wipe the floor with existing smartwatch manufacturers and give mid-market watchmakers a fright’. The magazine compliments Jony Ive in particular, for the design.

Jony Ive has got the tone of the Apple Watch just right. It looks elegant but not standoffish, and as well as the 18 variations of the regular version, there are the 10 Sport options, which come with a lightweight case, strengthened glass and a rubber strap, plus the more expensive Edition range (six models), made from 18ct gold.

END_OF_DOCUMENT_TOKEN_TO_BE_REPLACED 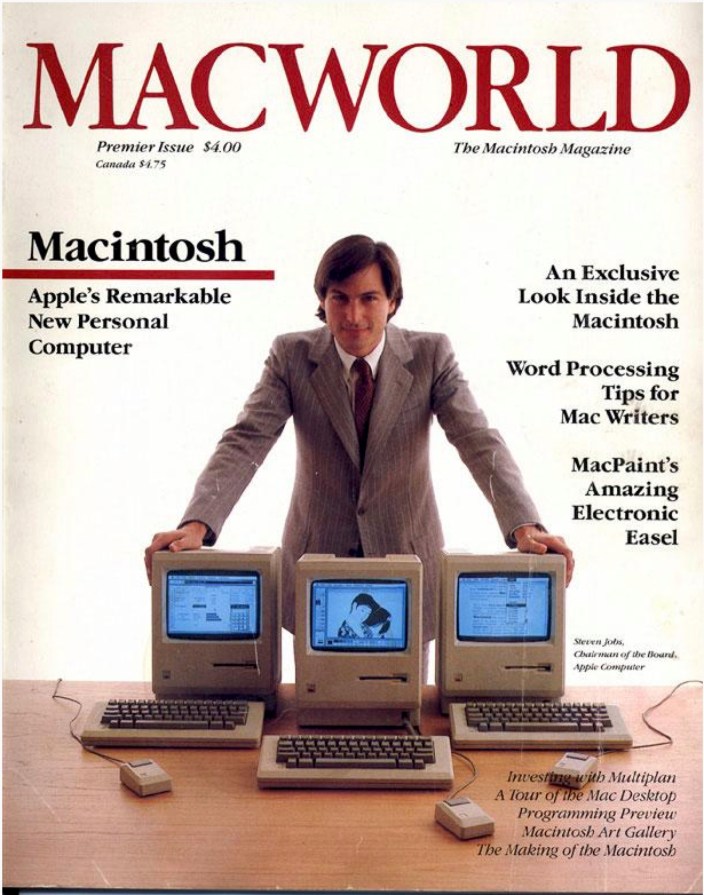 Pretty much the whole Macworld staff has been let go. Looks like the end. Sad Update: Dan Miller wrote in to clarify that he never implied that the magazine “would be a shell of its former self”  (even though most of the names and faces that were the backbone of the magazine have been let go). END_OF_DOCUMENT_TOKEN_TO_BE_REPLACED

If you’ve grabbed a Flipboard article that you want to share with other Flipboarding friends, the latest version of the iOS app allows you to do it right from within the app.

Do you ever find something on Flipboard that you want to pass along? Now it’s easy to share the stories you enjoy with other people within in the app—give the gift of awesome reading this season.

– Share stories directly to your friends on Flipboard. Select the mail icon in the share menu and enter their name or email address. Your friends will be notified in Flipboard to see what you have shared with them. – Receive notifications when other people on Flipboard share stories with you. – Bug fixes and performance improvements.

Flipboard is a free download on iTunes. The app was last updated in November with a more iOS 7 style look and performance improvements. A London-based digital publishing company is trialling use of Apple’s iBeacon technology to provide bar patrons with free access to digital versions of two magazines in Newsstand, reports TechCrunch.

The way it works is that the bar buys a subscription, and one or more iBeacons (each little larger than a quarter) unlock the content for customers within range. On iOS devices, the whole process is completely automatic. Once the customer leaves the location, the content is locked again and becomes available for purchase as normal …  END_OF_DOCUMENT_TOKEN_TO_BE_REPLACED

Save 50% on any ZAGG invisibleSHIELD for your iPhone, iPad, eReader or other gadget