Google’s web-based alternative to Microsoft PowerPoint is getting a big update today that adds the ability for members of the audience to easily ask questions during a presentation. Additionally, Google Slides is adding more presentation options on iOS and a cool laser pointer tool. 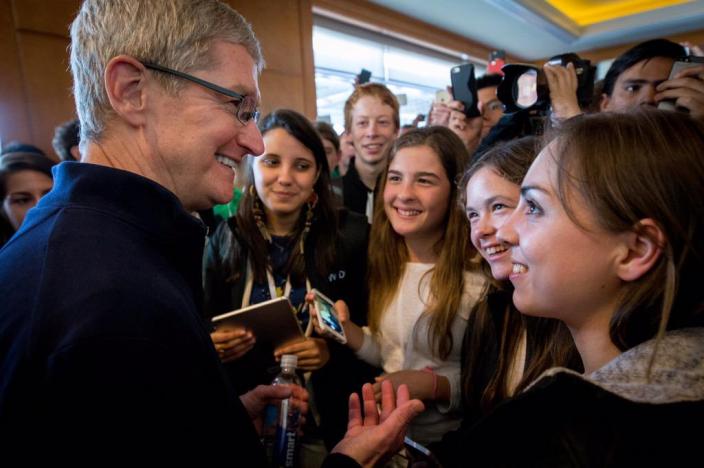 Mashable has conducted an interesting interview with Tim Cook on the eve of WWDC, one of Apple’s largest events of the year. Although WWDC is known for its product announcements, Apple will announce the next versions of iOS and OS X as well as a streaming music service, the interview revolved around Apple’s efforts on company employee diversity.

Asked about the lack of women at keynotes, Cook says “you’ll see a change tomorrow”. This suggests that women will indeed feature more prominently at Apple’s presentation. In the last ten years, the number of women at Apple’s events comes in at the low single digits, most recently Christy Turlington Burns. Apple’s developer sessions have better gender diversity in their speakers but these are viewable only by registered developers, not the general public.

END_OF_DOCUMENT_TOKEN_TO_BE_REPLACED

Google is today rolling out updates to its Google Docs and Slides mobile apps bringing the ability to insert images directly from the app on both phones and tablets.

With the update, iPhone and iPad users will be able to access their camera roll or snap a new photo to insert directly into a document or Slides presentation.

In addition, the update includes quicker access to make basic edits in Slides by allowing users to enter crop mode by double tapping any image in a presentation.

Google notes that both of the new features will work in offline mode.

The updated Docs and Slides apps should be hitting the App Store today.

Apple goes on the defensive against NSA iPhone spying allegations

Yesterday we reported on a presentation by security researcher Jacob Appelbaum that reportedly showed leaked NSA documents in which the agency claimed to have a “100 percent success rate” at installing spyware on iPhones. Following those accusations, Apple has officially responded in a statement provided to TechCrunch:

Apple has never worked with the NSA to create a backdoor in any of our products, including iPhone. Additionally, we have been unaware of this alleged NSA program targeting our products. We care deeply about our customers’ privacy and security.  Our team is continuously working to make our products even more secure, and we make it easy for customers to keep their software up to date with the latest advancements.  Whenever we hear about attempts to undermine Apple’s industry-leading security, we thoroughly investigate and take appropriate steps to protect our customers.  We will continue to use our resources to stay ahead of malicious hackers and defend our customers from security attacks, regardless of who’s behind them.

The leaked NSA documents detailed in Appelbaum’s presentation above and first released on German news site Der Spiegel claimed an NSA program called DROPOUTJEEP allowed officials to access almost all data stored on an iPhone, including location, text messages, contact lists, and the device’s microphone and camera. The reports claimed the NSA needed physical access to devices to install the spyware– something it could accomplish by intercepting online shipments– but a version that could be remotely installed was reportedly in development. Apple’s statement today seems to address Appelbaum’s accusation (below) that Apple might have had prior knowledge of the program: END_OF_DOCUMENT_TOKEN_TO_BE_REPLACED Yesterday we brought you some of the highlights from Apple CEO Tim Cook’s presentation at the Goldman Sachs Technology and Internet Conference, and now Apple made the conference’s audio available on its website. While Apple usually uses the conference to discuss numbers and trends, Cook gave us some hints at what’s next for Apple TV, and he also discussed worker safety following media attention over its supply chain abroad. END_OF_DOCUMENT_TOKEN_TO_BE_REPLACED