Opinion: Could Apple’s Pinterest profile be an early step toward properly-curated apps? 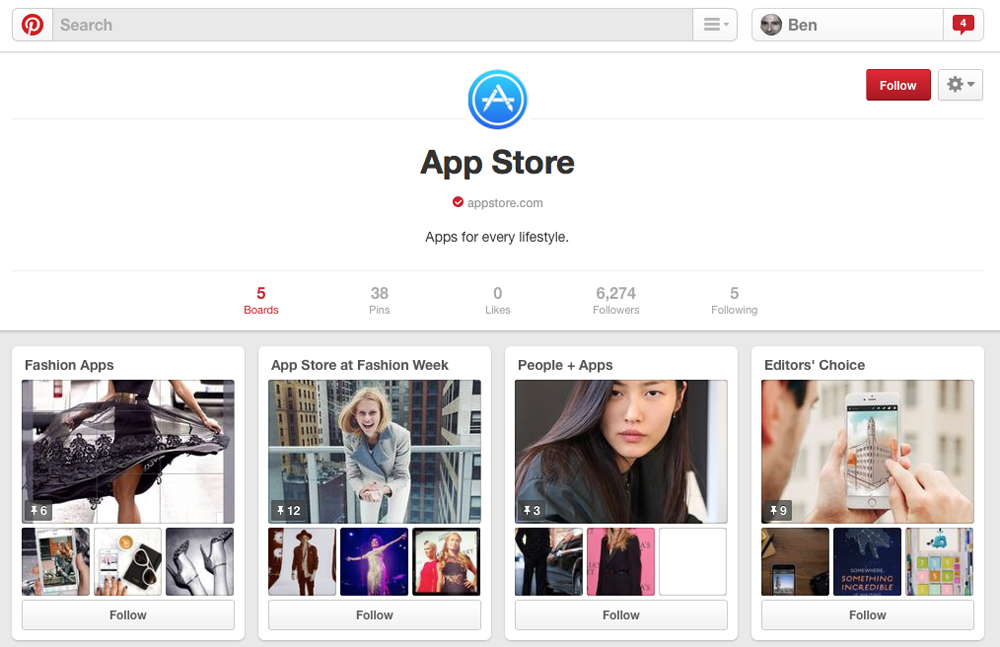 iOS and Android are completely different worlds when it comes to apps. Android is pretty much the wild west, with little control over quality or even safety (malware is commonplace). iOS, on a non-jailbroken device, is a walled garden, where Apple decides what apps can and can’t do, and which ones get approved for sale.

Yet despite that carefully-controlled approach, the App Store can still feel like a bit of a jungle. Which is why I wonder whether the Pinterest tie-in announced yesterday may offer hope for the future.

But let’s start with the problem I think needs to be solved, and that problem begins with search. Results may vary by country, and you can try the searches for yourself to compare your results with mine, but here’s what I get for a few obvious app searches …

I’ll start with a search for ‘twitter.’ The good news is that the official app comes up first (though I’m not sure that was always the case), and Instagram and Vine are not unreasonable apps to pull up next, but where’s Twitterrific? Where’s Tweetbot? Color Effects ahead of those? Followed by Happy Park–a theme park game whose only connection with twitter is that you can use the network to play with friends? Seriously, Apple?

Google+ as number 6, ok, but we’re then back into nonsense with a photo app and a voice-changer.

It’s the same with a search for ‘facebook.’ We get the official apps first, then Instagram and a page manager app, but hit five is a generic countdown timer whose only Facebook-related functionality is the ability to share screengrabs on the social network. Emoji keyboard, well, kind of vaguely okay-ish, I guess, but Bubble Mania as a Facebook app?

I could give other examples, but you get the idea. Even searches for specific app names often fail to bring up the correct app as the top hit, and as for misspellings … a few of them work, but for the most part, forget it. Executive summary: search is badly broken.

Featured Collections are of limited help. I’m not a parent, so perhaps ‘Pirates’ is indeed a popular app category, but it doesn’t spring immediately to mind as something the majority of people would be seeking.

And if I scroll right, there are three categories–Apps for Health, Get in Shape and Healthy Cooking–that could perhaps be usefully combined to make room for others.

Popular Apps are fine if I’m just aimlessly browsing for a new app to try out just for the hell of it, or I want to get a feel for the zeitgeist, but the sheer randomness means the category isn’t much help when I’m looking for an app to carry out a particular task.

Which brings me back to search. Perhaps category searches work better? Let’s try a search for ‘music’ …

Looks halfway reasonable at first glance, but hang on … the second hit in a major search category is an app with one-star reviews. Granted there’s a modicum of excuse, as the reviews indicate that it used to be a highly popular app, but it’s still there right after Spotify despite now apparently being completely non-functional.

So search is hopeless, and Apple’s attempts at curation are at best of limited value–and it’s been that way for a long, long time.

But the Pinterest tie-in gives me a little hope that improvements may be on the way. First, there is Apple’s own Pinterest profile. There isn’t much there as yet, but it has kicked things off during Fashion Week with a curated collection of fashion-oriented and healthy recipe apps. Granted the celebrity picks and random Editor’s Choice are less useful, it’s a start.

I’m hopeful that this is just the opening move, and that Apple will rapidly expand its profile to a whole raft of app categories, carefully curating them to choose standout apps.

One might ask why Apple is doing this app curation on a third-party service rather than within its own App Store, but my guess is that the answer to that is pretty simple: human app curation is time-consuming. It doesn’t make sense to radically revamp the App Store until there is a substantial collection of app categories in place. Pinterest makes sense as a temporary repository for these collections until there are enough categories in place to redesign the App Store around them.

It’s possible, of course, that I’m being too optimistic here. That Apple will throw up the occasional topical collection of apps onto Pinterest and that’s it. But with over 1.4 million apps, and a search function that is far from fit for purpose, I’d like to think that the Pinterest profile is just the first step in a long-overdue plan to bring the App Store into the 21st Century.