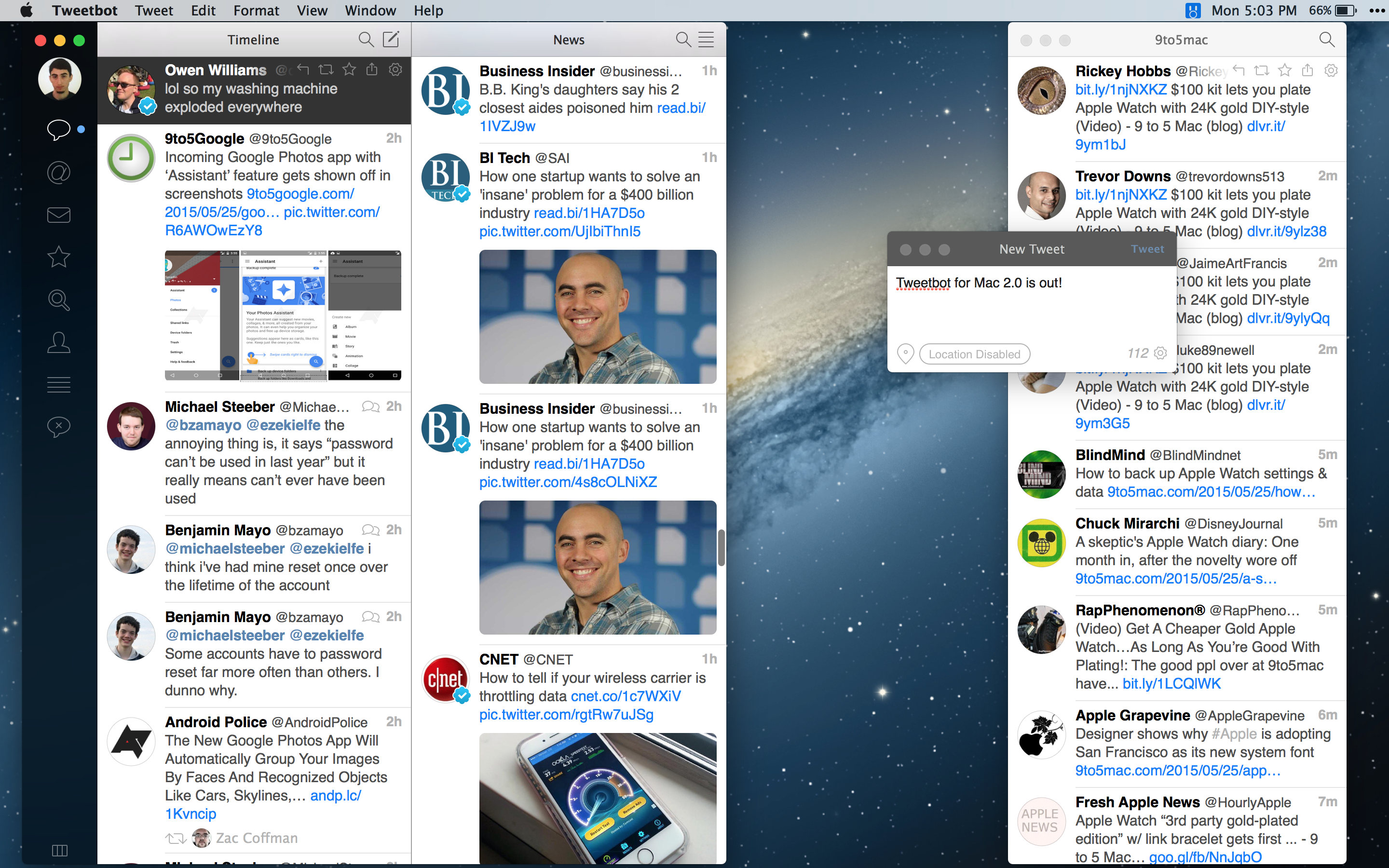 Yes, you read that headline right. The long-awaited Yosemite update for Tweetbot is finally here. The application has been rebuilt with a new look and updated controls for several features that make things like creating columns and tracking down the tweet associated with an image much easier.

The main attraction for most users will be the new design, so let’s take a look at that in a bit more detail first…

Tweetbot 2 fully embraces the Yosemite aesthetic that was introduced in OS X last year while still maintaining much of the same functionality and layout with which users are already familiar. Everything has been flattened, and timelines that previously sported a light gray tone are now pure white.

The dark gray color on the sidebar has been swapped out in favor a dark translucent look, while the sidebar buttons for each section have been replaced with simpler glyphs. A circular blue indicator on the right side of the icon now indicates new activity in place of the vertical bar that previously appeared on the left side (a change which, if you can believe it, actually hampered my workflow for a while). The iconography throughout the app is now more in-line with its iOS counterpart. 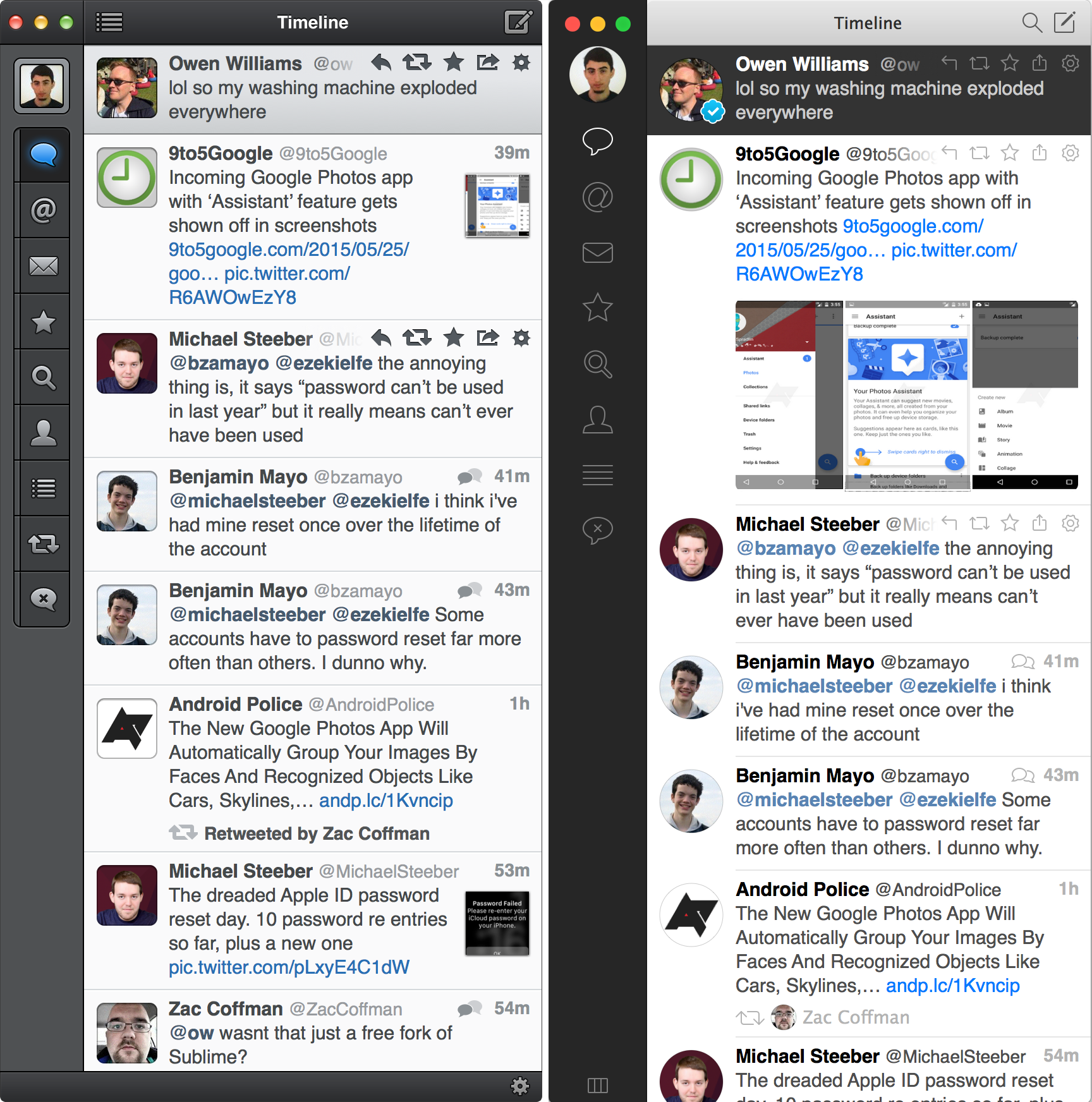 Some new preferences allow for a more customized look. You can choose between the new circular profile photos or the old roundrect look. You can also toggle “verified” badges in the timeline to help quickly spot real and fake accounts.

The compose window has been tweaked and no longer “docks” itself on the main timeline when you start a new tweet. Instead, it’s a separate window that you can click off of at any time without having to “tear” it away from the other window first.

While some UI elements had to be moved around to accommodate the new design, most of the relocated items actually improve the app’s usability as well. For example, the process to open a Twitter list in a new column was previously a little convoluted: open the Lists tab in the main window, select the list you want, click the gear button at the top of the next screen, select “open in new column,” then return the main window to wherever you originally had it. Removing a tab required digging through the menu hidden under the gear icon at the bottom of the app.

Reattach a column to the main window in Tweetbot 2

That process has been immensely simplified. To open a list in a column now, you just need to click the new button that appears at the bottom of the sidebar (it looks like three side-by-side columns), then select a list or saved search from the menu. That list will automatically open in a new column ready to use.

Removing columns (or detaching them from the main window) is just as easy. Right click the column header and you’ll have instant access to those controls. Similarly, right-clicking the main window’s header will let you switch out your primary timeline with one of your lists.

Another feature that has been moved around is the timeline search bar. The new location isn’t a huge change over the old one, but it makes a noticeable difference. Where the old bar would sometimes cause my timeline to lose its position if I wasn’t at the top, the new one solves that problem by moving the input field to the window title bar and leaving the timeline exactly where it is. A new button next to the compose button makes it easier to enter search mode without using the keyboard shortcut.

The image viewer has also gotten an overhaul in both form and function, at least in some cases. While most images will open in a separate window resembling that of the previous version (now with a permanent toolbar versus the old one that only appeared on rollover), images opened from a profile view will include the original tweet at the bottom to provide context. You can click that tweet to open it in the main Tweetbot window. 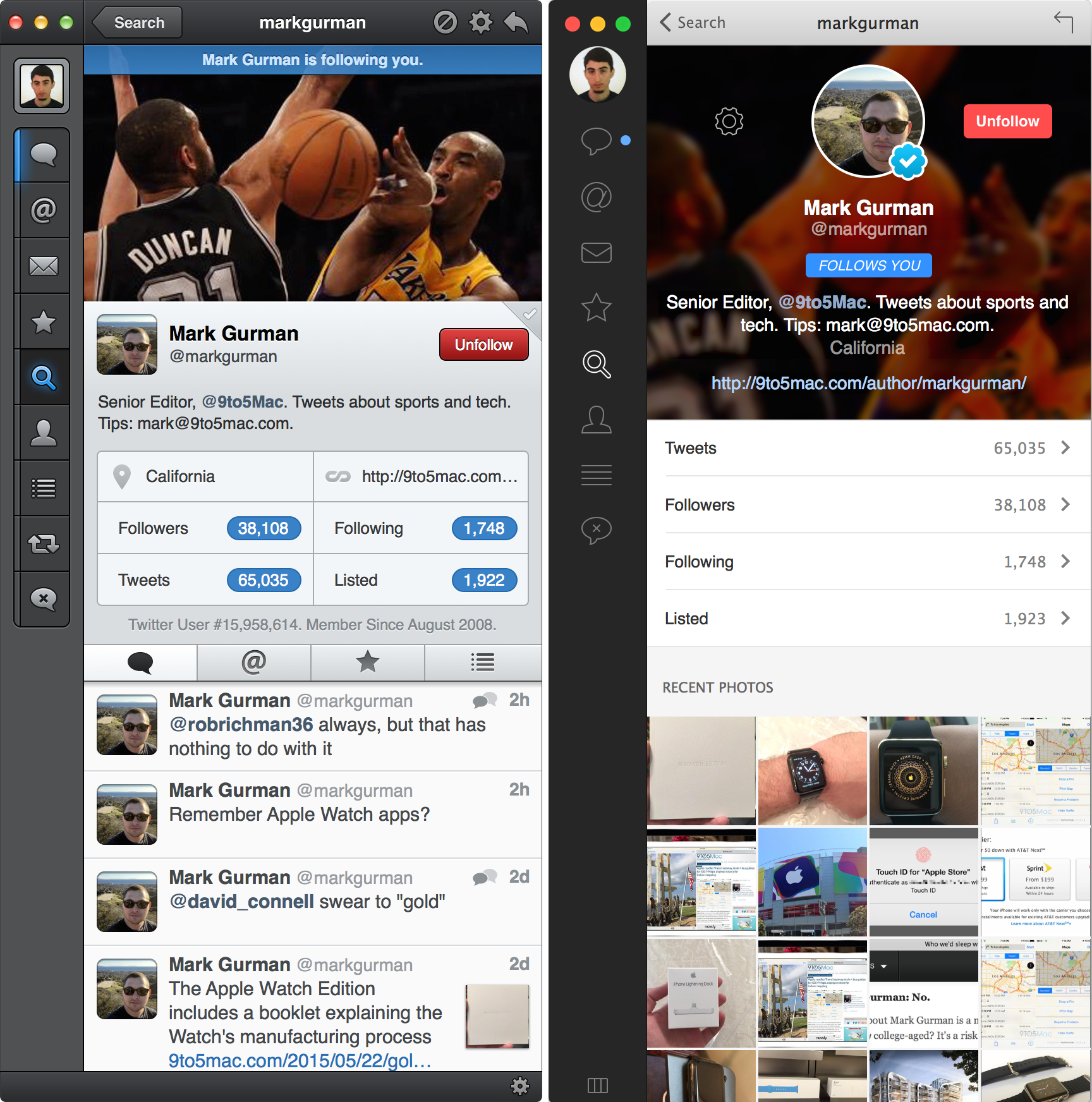 Speaking of profile views, you’ll find that the design on those screens is now more closely aligned with that of the iOS version. Rather than listing a user’s tweets below information like follower and following counts, Tweetbot for Mac now shows a user’s recent photos. In order to view their timeline, you’ll need to click the tweet counter.

Not every repositioned UI element provides a better user experience, however, and the profile view features a great example of this. The button to block users or report spambots used to be located at the top of the window. Now it’s been moved below the image section, meaning you’ll have to scroll through that in order to file a spam report.

One feature that has been completely removed from the app is the retweets tab. I personally used that tab so little that I had hidden it from the app through the view menu and didn’t even notice that it disappeared when I updated to version 2.

Another missing feature that was a favorite of mine in earlier versions of Tweetbot was the option to use small media previews in the timeline. You can still turn previews off completely, but enabling them will force you to use the larger mode.

There are a few other small changes that I’m not in love with. The first is the new icon. I’ve always been of the opinion that square icons should be reserved for the iPhone and Mac apps should take full advantage of the fact that they can use complex icon shapes. While the old Tweetbot icon did this well, the new icon (which resembles the Calcbot for Mac icon) looks more like it belongs on an iOS device than a Mac. Even if you use the completely stock Yosemite dock, the app just kind of sticks out.

I’m also slightly annoyed by the constant reminder that geolocation is disabled on my Twitter account which appears at the bottom of every compose window. In the old version of Tweetbot, this warning showed once and then went away. Now it shows all the time.

One final thing that some users may find off-putting: Tweetbot for Mac still can’t show you embedded tweets like the iOS version can. That won’t be an issue for long, though. Tapbots Mac developer Todd Thomas has said that he currently plans to put this capability in version 2.1.

Putting aside the icon and a few rearranged UI elements that make certain tasks a little more involved than they used to be, Tweetbot 2 is a solid upgrade even if you’re not a fan of the Yosemite design. The easier column management, new image viewer, and many UI tweaks alone make it worth the update.

You can download Tweetbot for Mac 2.0 from the Mac App Store right now. For existing Tweetbot users, the upgrade is completely free. For new users the price of the app has been permanently lowered from $19.99 to $12.99.

Note: I changed my system font from Helvetica Neue to Lucida Grande. That change is reflected in some smaller parts of these screenshots, such as the labels at the top of columns, the preferences window, and the “Tweet” button on the composer. The bulk of the app’s text remains unchanged.