With iOS 9 released late last month, Apple introduced a full-fledged audio plug-in framework for the first time on its mobile devices, allowing iPhone and iPad apps to implement support for third-party audio plug-ins just like on a Mac.

In fact, the audio plugin framework comes in the form of Audio Unit version 3, an updated version of the file type Apple has long used on the Mac for audio plug-ins in professional-class apps like Logic Pro.

Now that iOS 9 is available to all, we took the feature for a test drive using a couple of the very first apps to update with support…

The Audio Units extension framework is essentially an improved way to use audio apps, like effects and virtual instruments, within audio host apps, like Apple’s own GarageBand or other audio editing and mixing apps. Previously users had to use hacked together solutions, such as Apple’s inter-app audio feature or third-party solutions like Audiobus, to jump between apps and apply things like effects to another app running in the background. But with AUs, Apple lets audio plug-ins show up as a UI within another app, improving the workflow and making the experience much like what pros are used to on the Mac in apps like Logic Pro.

What’s required is apps to update with support: Editing apps like Garageband will get updates to become host apps, while effects and virtual instrument apps will need to update with support for being used as AUs in the host apps. And we’ll likely see companies that make AUs for the Mac bring standalone apps to the iOS App Store for use as audio plugins in host apps. With Audio Units version 3, source code for Audio Units on Mac will be identical for iOS and developers will only be required to optimize their plug-in for touch controls.

“It’s great that 3rd party effects and instruments can now be integrated in MultitrackStudio without the problems associated with Inter-App Audio. Audio Units support state saving and multiple instances, and you can use them without having to switch between apps.” — Giel Bremmers, developer of MultitrackStudio, one of the first iOS apps to update with Audio Unit support, told us.

Apple hasn’t updated GarageBand with the feature, despite having it up and running to demo the feature to developers earlier this year at its Worldwide Developers Conference in June. But you can try the feature thanks to a few third-party apps that have already implemented support.

First you’ll need an editor app that supports using Audio Units and secondly another app that acts as an AU plug-in. For our tests, we used the feature with MultitrackStudio ($30), one of the first digital audio workstations to update with support. And for our audio plug-in, we downloaded Remaster ($3), an EQ and Compressor plug-in that appears to be the first to act as a standalone AU available to purchase on the App Store.

Once you’ve downloaded both a host app (like Multitrack Studio) and a plug-in app (like Remaster), you’ll see the plug-in appear in a menu called “Audio Units” or “AUs” within the host app. It will be up to the host app on how it implements the AUs menu, but in most host apps you’ll find the menu where other effects, instruments, or editing tools can be applied. For Multitrack Studio, each track has effect modules (pictured below) where the AU menu can be found and AUs can be applied to any given track in the composition: 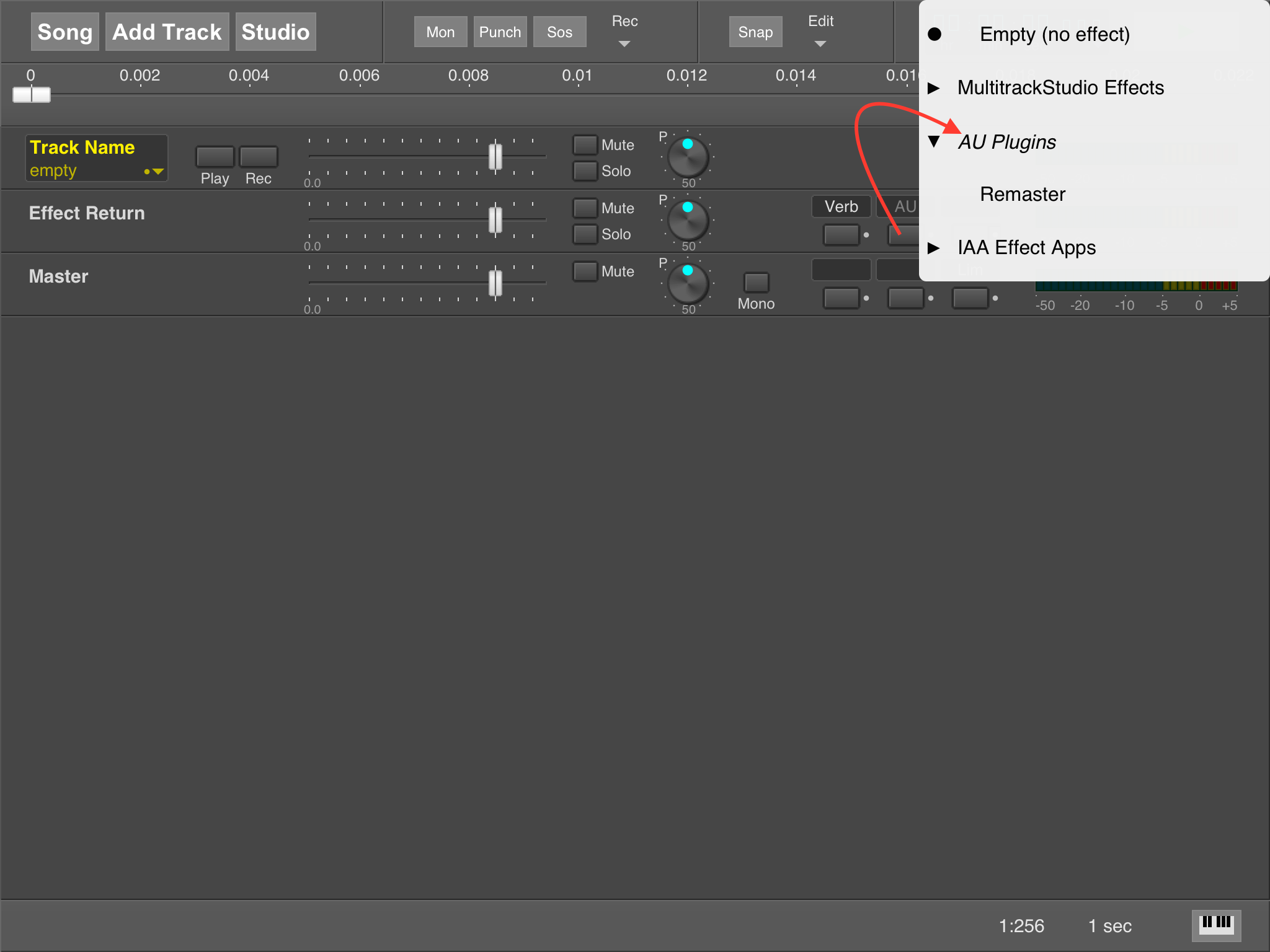 Once you select the AU plugin, you can drill into its interface (in this case an EQ using Remaster) by tapping on “AU” on the track you’ve applied it to (pictured below): 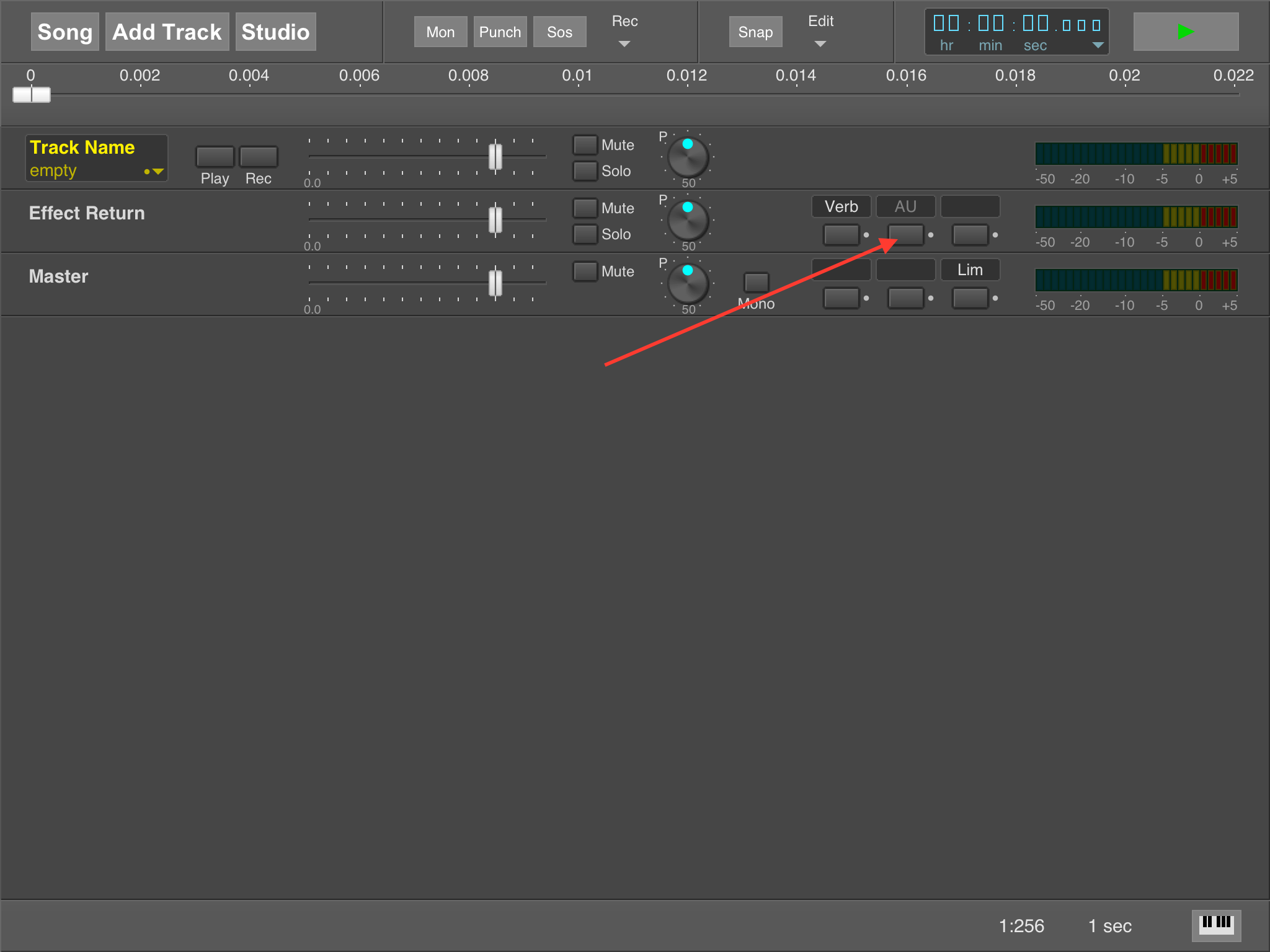 And this is what the Remaster EQ plug-in UI looks like when opened in Multitrack Studio: 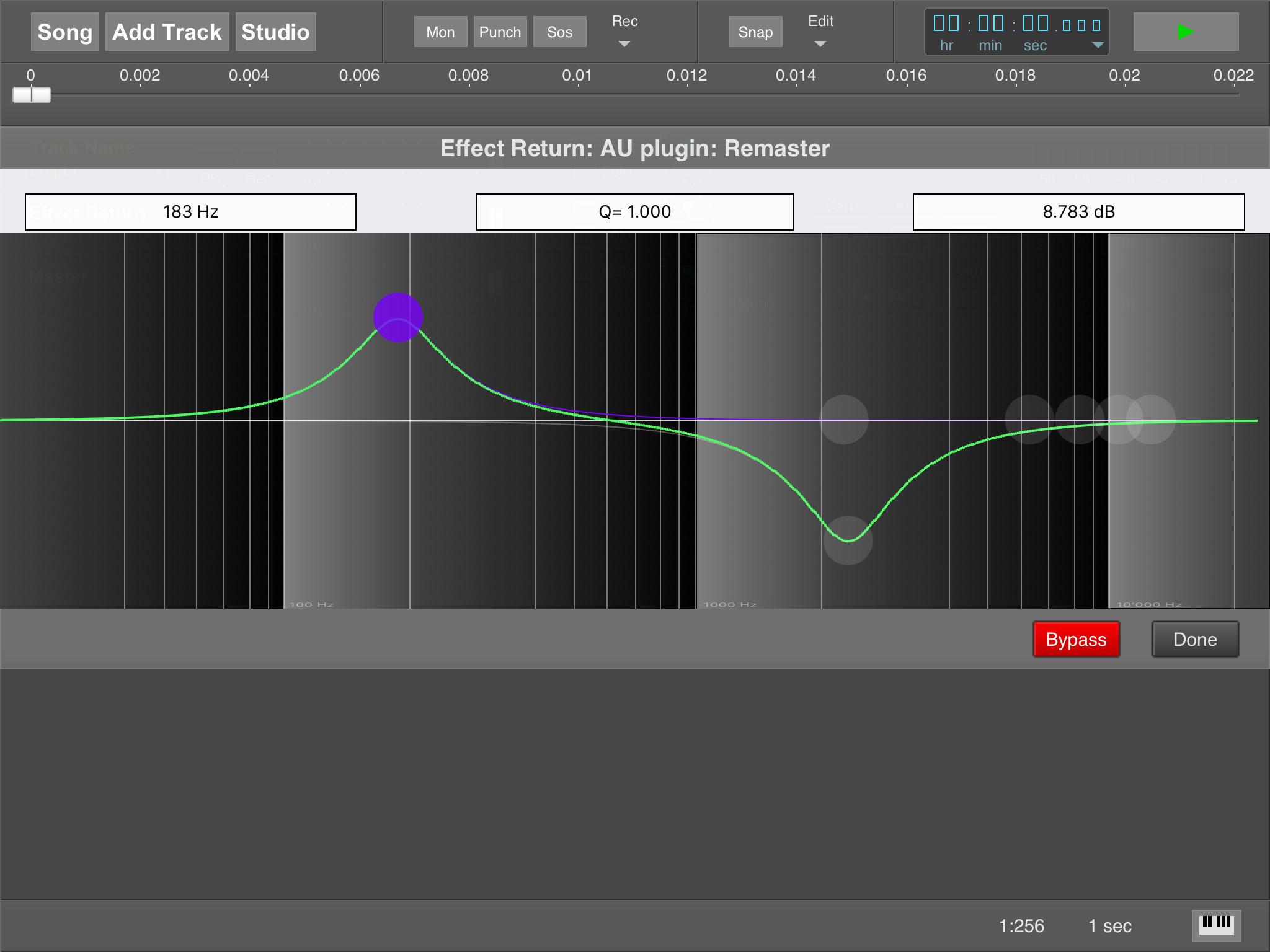 Of course each plug-in will look different as developers of each app design their own user interfaces. But the experience is definitely a leap beyond what Apple offered previously with inter-app audio, allowing musicians and audio editors access to, in theory, an endless amount of audio tool add-ons within their favorite editing apps.

My one complaint with using the feature in MultitrackStudio: AUs only show up with the title “AU” when applied to tracks rather than the name of the plug-in itself. Hopefully that wont be the case for all AUs and host apps on iOS, as applying several in a single project could get hard to manage if they are only called “AU” after being applied to your project. Edit: The MultitrackStudio developers tell me a future update will put a AU bundle icon next to each plugin, allowing you to see what plugin app you’re using.

I also didn’t get to try out using presets or automation, as those features aren’t yet supported in MultitrackStudio.

Developers should also get access to Apple’s own audio plug-ins (something it promised and demoed at WWDC), but first it has to update them to support the new cross-platform Audio Unit Version 3. Those include Apple’s AUDelay, AUDistortion, AUHighPassFilter, etc, and other effects that it long had available to Mac users in Logic Pro and GarageBand as well as iOS developers (minus the new iOS AU plugin interface introduced with Audio Unit version 3.) Once that happens, each host AU app should at least come with a handful of built-in, default Apple plug-ins, but for now you’ll need to download third-party plugins (like Remaster) to try out the feature in host apps (like MultitrackStudio).

Once Apple does update with support, you can expect the feature to look something like this within GarageBand (from WWDC earlier this year):

We’ve reached out to developers working on implementing the Audio Units extension to feature in upcoming articles. Developers interested in being featured can reach me at Jordan@9to5Mac.com.

Check out The Logic Pros, our new regular series exploring all of the most interesting gadgets and software for making music on your Mac/iOS devices.