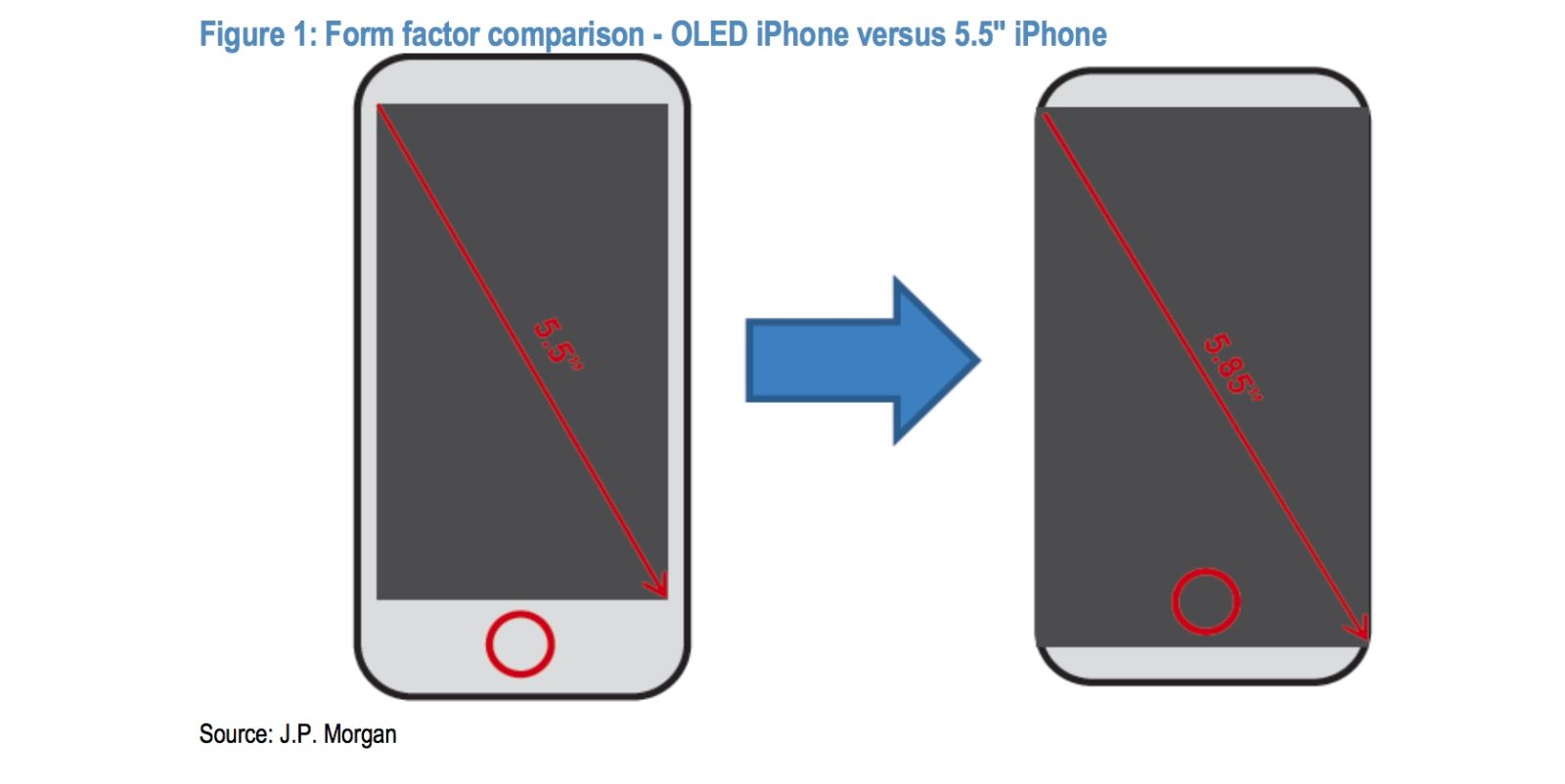 In a lengthy report from JPMorgan, the analyst uildreaks down its latest predictions about the upcoming 2017 iPhone updates.

The ‘modest upgrade’ iPhone 7s models will reportedly use glass backs in addition to the radical OLED iPhone. It says the OLED display will be edge-to-edge horizontally on the iPhone 8, not vertically (pictures after the jump). The analyst also claims that the iPhone 8 may come bundled with a free pair of wireless AirPods and predicts the total added cost to Apple of all the new technology inside the OLED iPhone …

JPMorgan’s success rate with Apple rumors is sketchy and only recently claimed Apple would announce the new iPhone next month, so treat what it says with a good deal of skepticism.

The report suggests that the iterative phones, being dubbed iPhone 7s and iPhone 7s Plus, will have some aesthetic changes compared to the iPhone 7 and iPhone 7 Plus.

This includes the transition from aluminium to 2.5D glass backs and the inclusion of wireless charging. KGI has previously made similar claims. JPMorgan says that the iPhone 8 will mesh stainless steel and glass but the 7s chassis will be composed of aluminium and glass; they will retain aluminium sides.

It also includes a diagram of the iPhone 8 design with the 5.85 inch display stretching edge-to-edge on the left and right with top and bottom bezels.

This contradicts what we have seen recently from another chain of rumors that suggested the display will cover the entire face.

It isn’t clear how much faith to put in the drawings, whether they are just rough approximations or accurate dimensions. Obviously, the drawing of the interior component layout is very rough — it shows the 30% larger capacity L-shaped battery we have seen KGI also comment on.

In fact, the diagram more closely resembles earlier schematics leaks … which featured rear Touch ID sensor. JPMorgan does not address the state of the fingerprint sensor at all in its reporting; it literally leaves it as a unanswered ‘?’ mark in its summary table.

JPMorgan also suggests the possibility of Apple including AirPods in the same box as the iPhone 8. Given the high cost base of AirPods relative to EarPods, this seems unlikely honestly.

Another issue is supply; AirPods continue to face six-week shipping estimates on Apple.com and Apple would not want to bottleneck iPhone 8 supply because of the earphones accessory.

The report also echoes other sources indicating that the iPhone 8 dual camera will feature optical image stabilization on both lenses, the addition of 3D sensing facial recognition, better speakers and enhanced waterproofing.

Overall, JPMorgan estimates that the new exterior and interior component upgrades for iPhone 8 will cost Apple an additional $75-$80 per unit. This is the bill of materials cost and doesn’t include a lot of factors like R&D or manufacturing.

It also doesn’t really shine much light on how much Apple plans to charge the end user for the new OLED iPhone — although arguably it sets a price floor of at least $75 above what Apple charges for iPhone 7 Plus.

Again, JPMorgan is yet to show a good track record of accuracy when it comes to predicting future Apple products, so treat these claims with healthy skepticism. The bundled AirPods claim is probably the most unlikely given the current supply constraints Apple is dealing with.