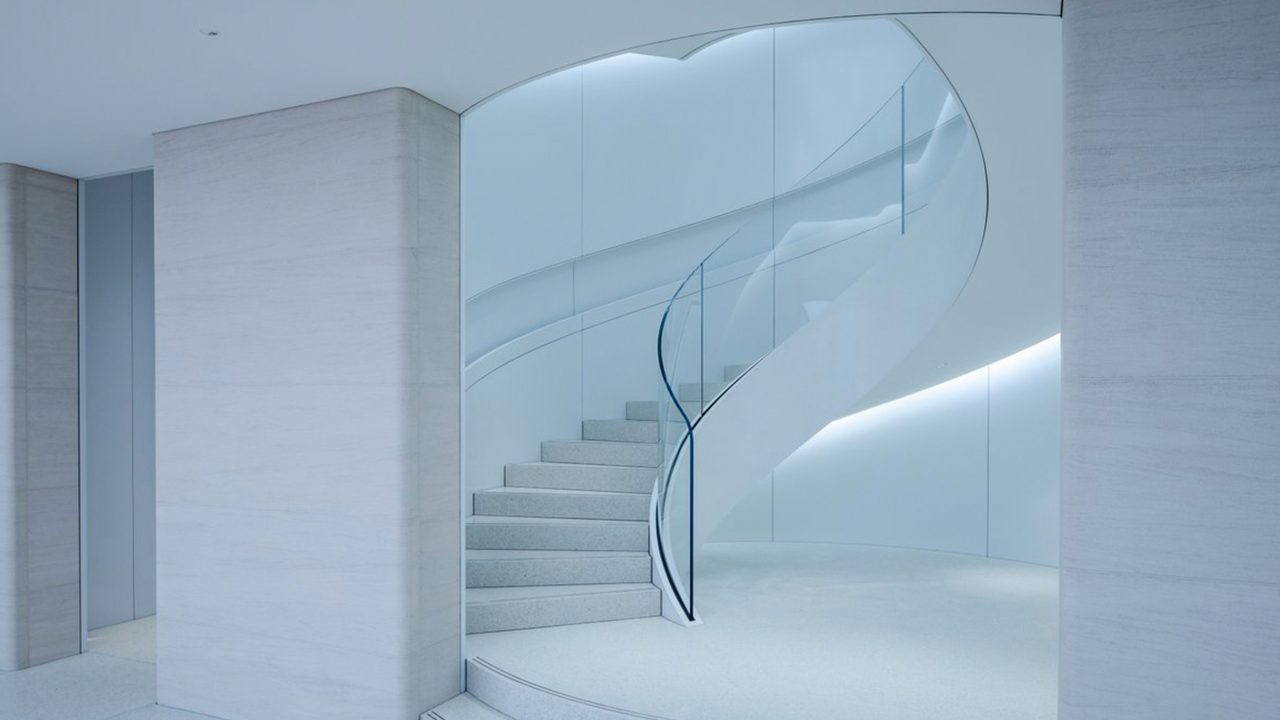 Apple’s third store in Japan to feature modern styling opens alongside the release of the iPhone XR this Friday. Before customers begin lining up, Apple Shibuya’s design details have been revealed. The renovations represent the culmination of 11 months of construction work during which two more stores opened in Japan.

Compact and tall, the new Apple Shibuya extends three public stories above the Tokyo district’s pavement, with a fourth floor accessible for meetings only. Located in the same space as the previous storefront, the transformation is dramatic. Originally, the facade was clad in stainless steel paneling reaching the second floor. No windows extended above ground level.

Natural light in the new space is extensive, and helps to mitigate the feeling of a cramped store. Floor to ceiling windows dominate each of the lower levels. The first and third floors are inset, creating a small entryway below and a balcony above. The second floor’s glass panels seamlessly overlap both adjacent levels to create a railing and overhang at the same time. 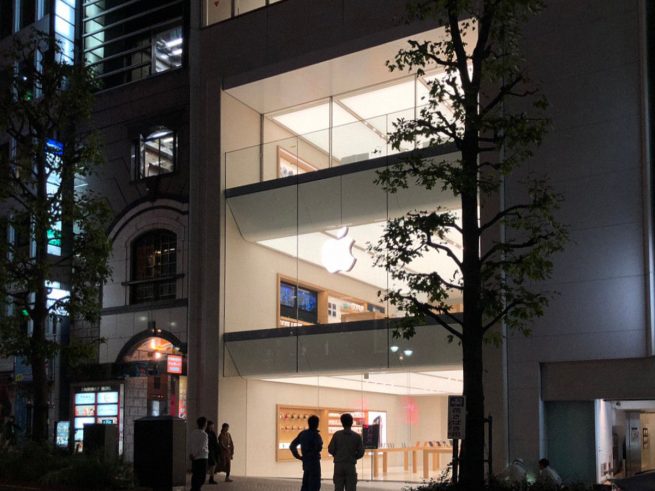 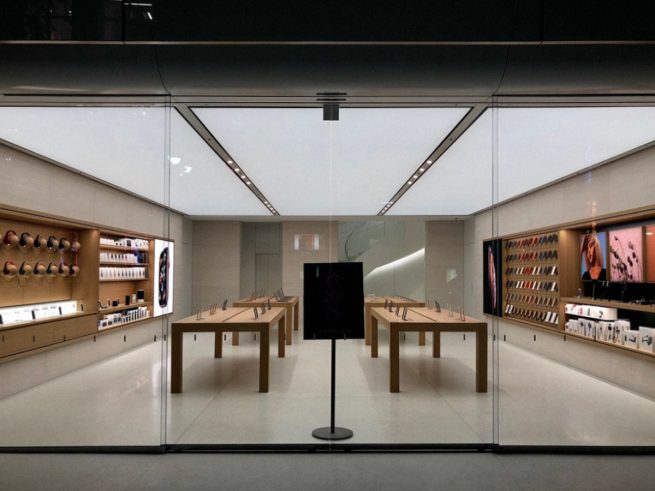 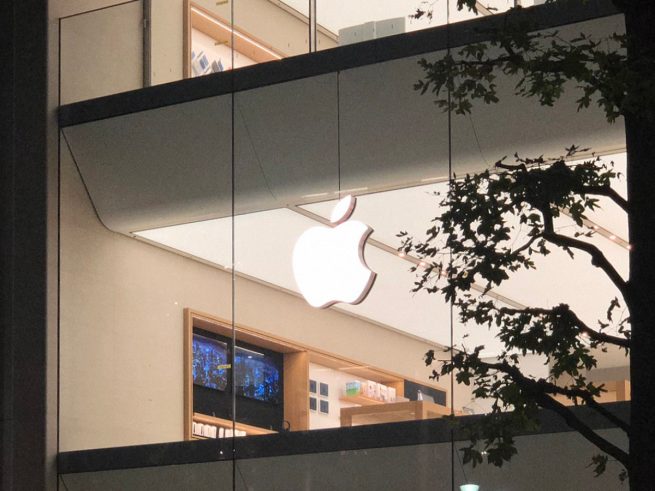 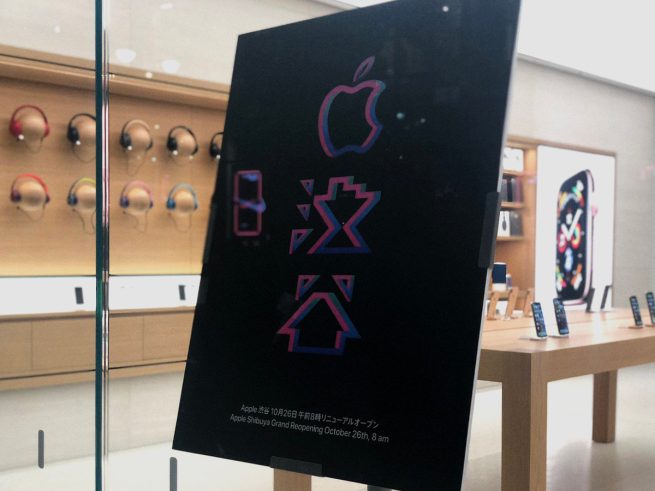 With more room reserved for back of house activities than before, Apple has chosen to extend upward instead of inward. Three tiny terrazzo-covered floors showcase products, accessories, and tables for sessions and support. Oddly enough, the space doesn’t feature a video wall like nearly every other recent Apple store. This is likely a byproduct of space constraints rather than a shift in design strategy. 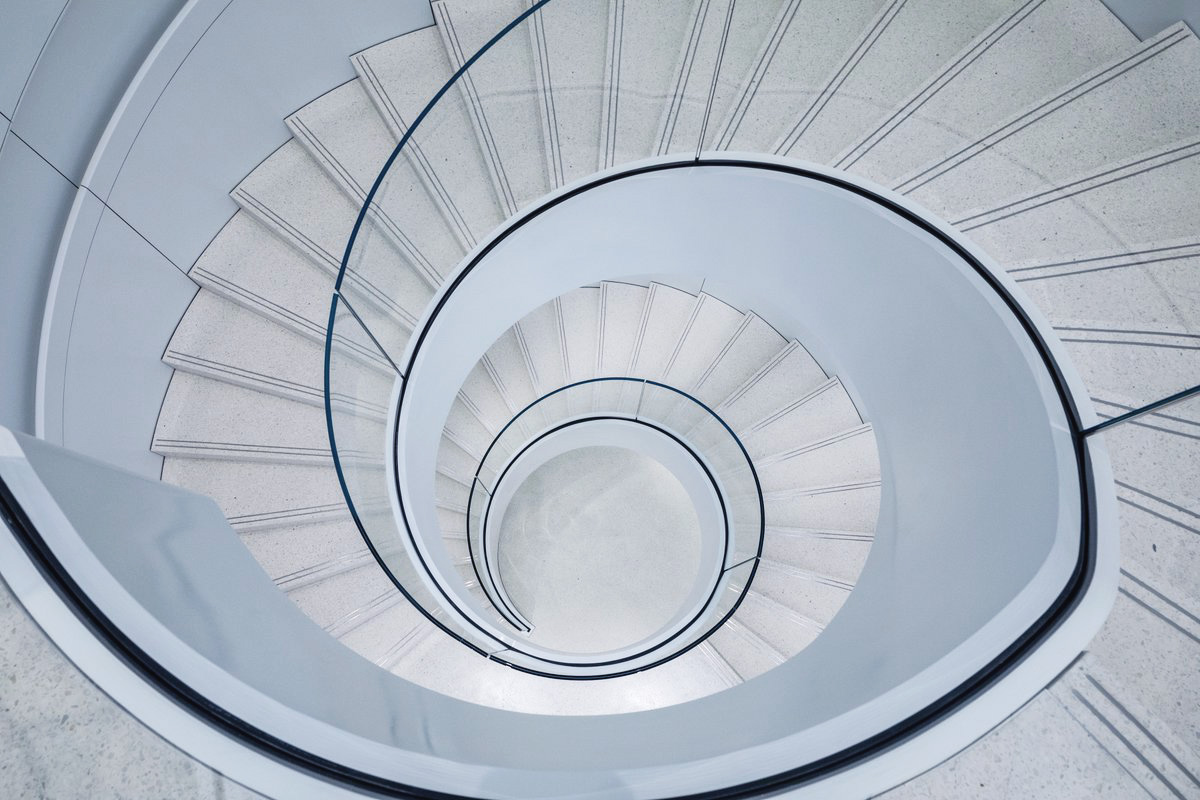 The highlight of Apple Shibuya’s new design is a stunning spiral staircase at the rear of the store. The overall look is similar to staircases at Steve Jobs Theater and Apple Kyoto, but the blend of materials makes it entirely unique. A curved glass railing with a rounded corner wraps around the entire inner spiral, mirrored by a carved outer handrail. The stone used on this staircase differs from the type used in Cupertino, Kyoto, or at London’s Regent Street, likely for structural reasons.

The original Shibuya store was also known for its signature spiral staircase. Built out of glass treads and a metal handrail, its design reflected Apple’s retail aesthetics of the era and resembled a larger version used at Apple Omotesando. 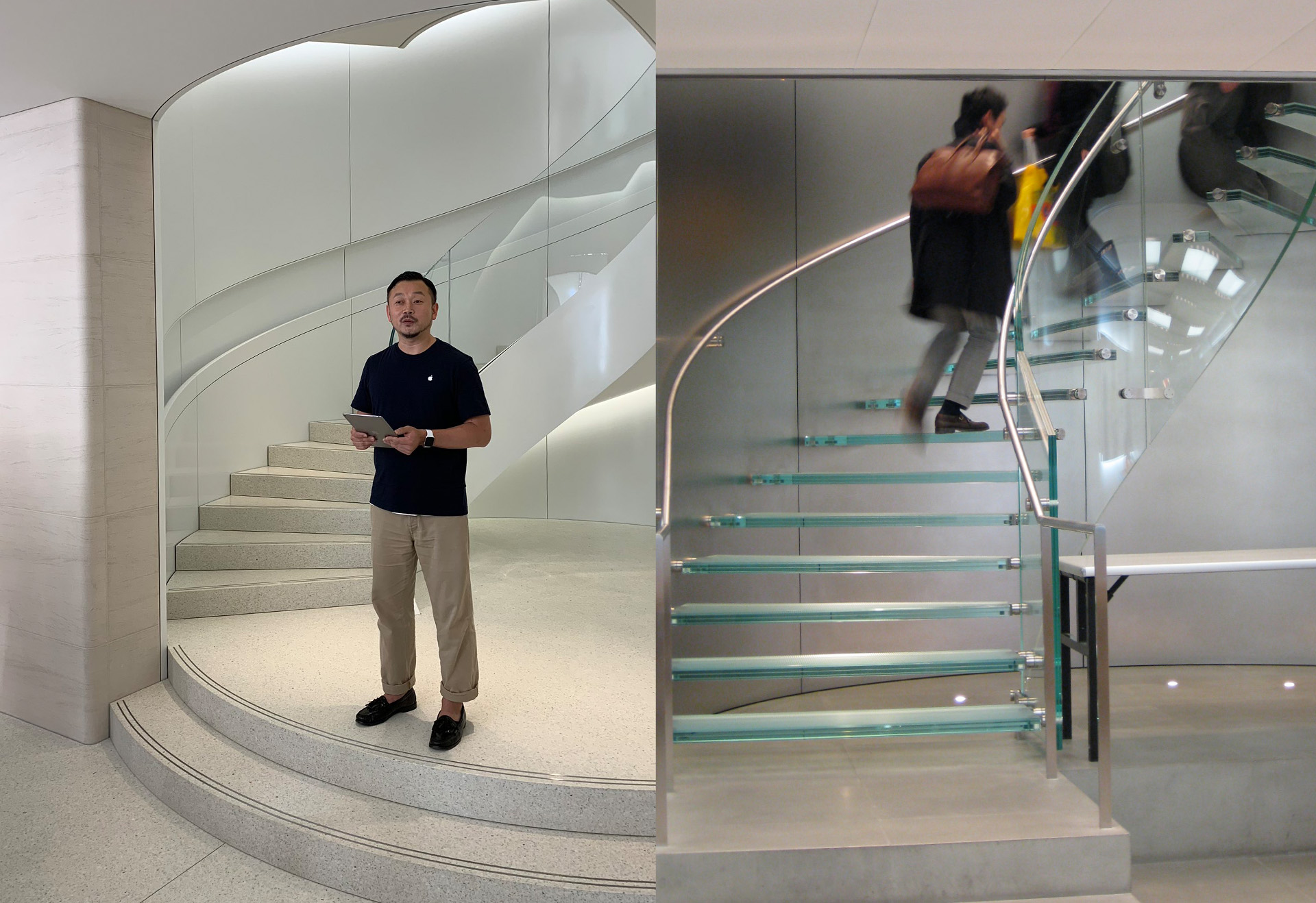 Above the public store levels is Apple’s signature Boardroom, a private meeting space typically present only in major new stores. Shibuya is the second Apple store in Japan with a Boardroom, following Kyoto. Apple Shinjuku, which opened in April, does not have a Boardroom despite its modern design.

New in Shibuya’s Boardroom is a revised table with integrated charge points for attaching custom power cables. Apple has used this design in its product tables for about a year now, but not in Boardrooms. 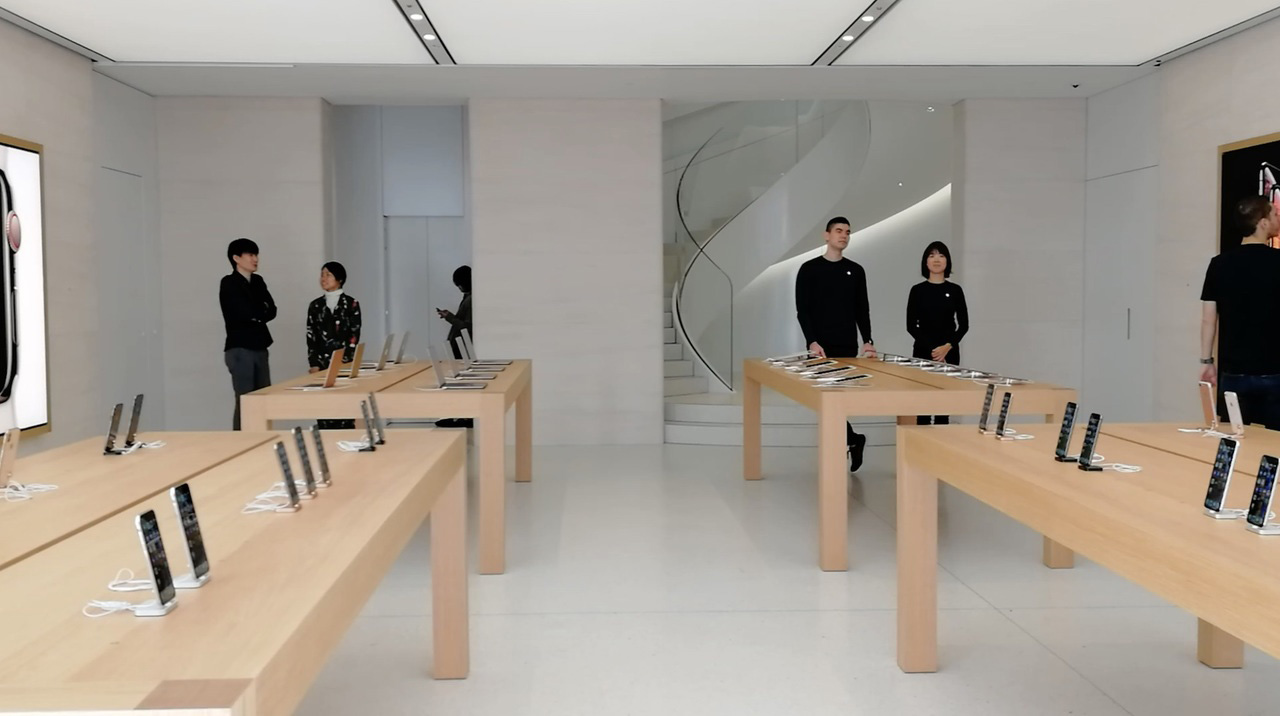 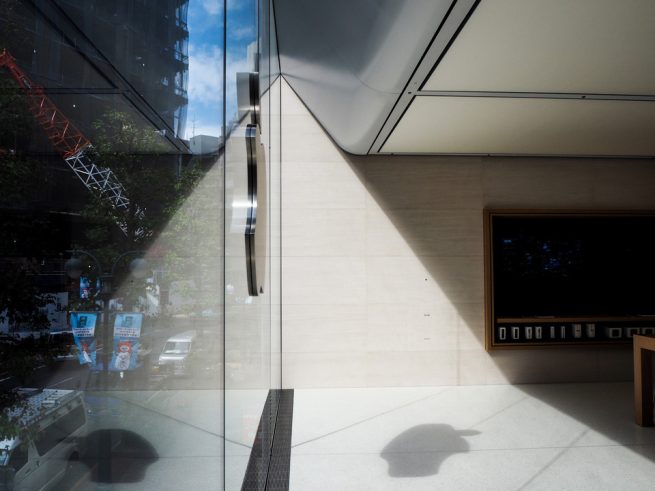 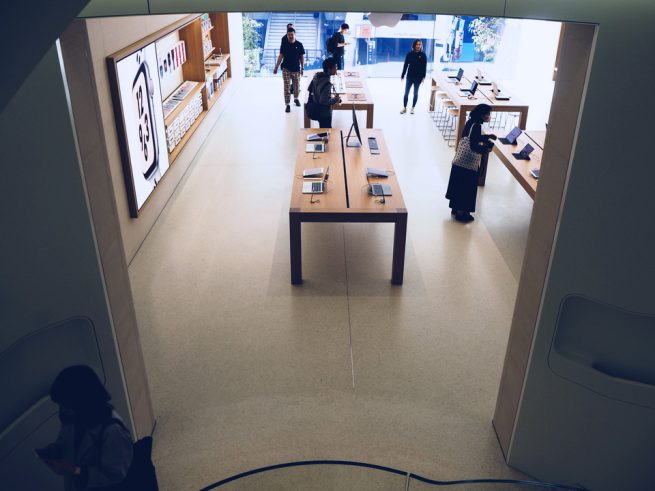 Upon opening in August 2005, Apple Shibuya was Japan’s fourth store. According to reports at the time, as many as 3,000 people may have been present at its opening. In addition to souvenir T-shirts, Incase produced a special edition Hachiko iPod case for the new store.

The original Apple Shibuya was a product of the iPod era in more ways than one. Its modest size was well-suited to display the tiny iPods Apple offered at the time. Artwork announcing the store’s opening even featured profile renders of the iPod mini. Throughout the building, the store’s industrial design closely mimicked Apple’s products in 2005.

The new Apple Shibuya was under construction for 11 months and is the fulfillment of a commitment made earlier this year to open a total of three stores by the end of 2018. Its opening marks a milestone in Apple’s renewed investment in Japan, first promoted by Angela Ahrendts and recently reinforced by the promise of another new store coming in 2019.

As a study in Apple retail design, Shibuya offers several takeaways. Its interior layout is highly similar to the original store, but with entirely different architecture, making it perhaps the best side-by-side comparison between Apple’s old and new styling.

It also proves that maintaining a presence in influential communities is more critical to Apple than offering a full complement of store features like a Forum and video wall. Apple still promotes Shibuya as a place to connect with others and be inspired despite its lack of a large gathering space. 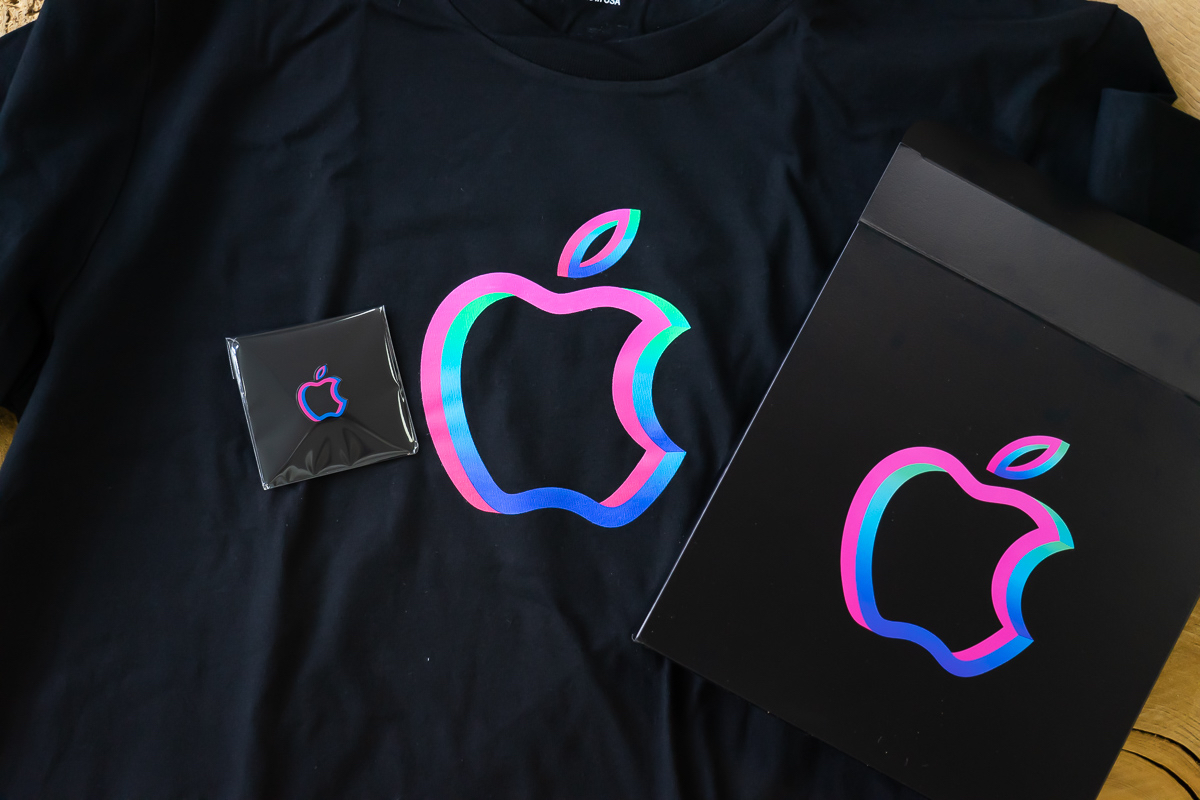 Finally, Shibuya might offer some perspective into how Apple will tackle future store designs. The imminent unveiling of Fifth Avenue’s glass cube will bring with it an updated grand staircase sans glass treads. Shibuya’s design could be a template for the new look. The multi-floor design also provides precedent for other classic stores like The Grove, Boylston Street, and Sainte-Catherine, where renovations are just a matter of time.

We welcome your photos from Apple store openings, and follow along with 9to5Mac’s retail guide for more news.