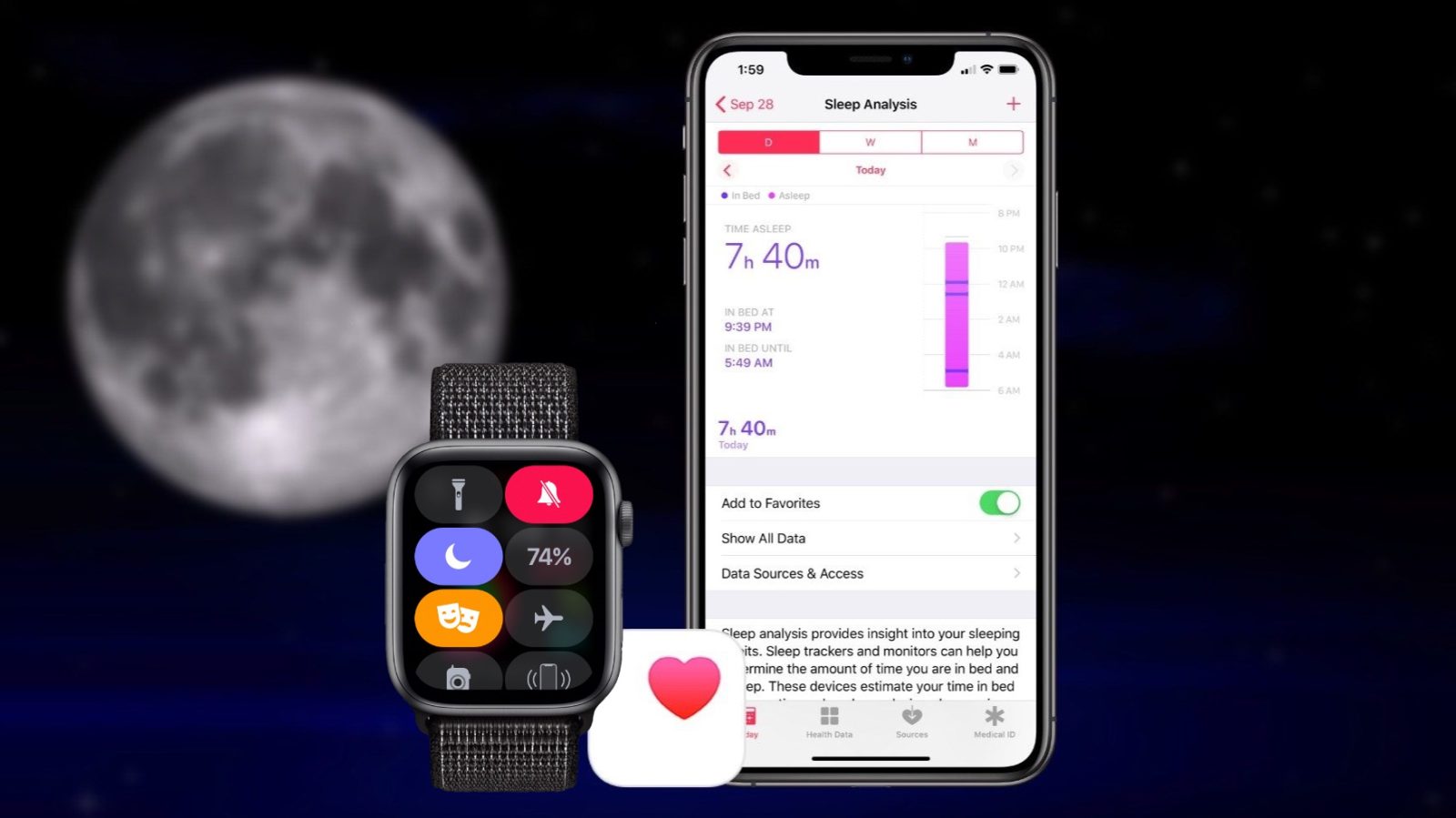 watchOS 6, the next major version of Apple Watch software, will be an interesting operating system update. In recent years, the Apple Watch OS has focused on health and fitness features matched with software that uses new hardware like streaming Apple Music and Podcasts over LTE and the ECG app.

Apple Watch Series 5 hardware rumors are already extremely light, limited to the return of the ceramic Edition casing, and watchOS 6 rumors are even more sparse. With several Apple Watch features complete and built-in sleep tracking not expected until late 2020, what should we expect to see in watchOS 6?

Apple’s Worldwide Developer Conference kicks off on Monday, June 3rd, in San Jose, California, which is when we should expect to see watchOS 6 publicly unveiled for the first time. Many of our previous wish list items have eventually made the cut — like stacking different activities in the Workout app, rearranging Control Center and improving the Siri wave form, and adding a standalone Podcasts app — so what’s left for watchOS 6?

Even if built-in sleep tracking isn’t expected until the Apple Watch Series 6 in September 2020, lots of Apple Watch owners are already tracking sleep duration and quality overnight. My advice for wearing Apple Watch to bed includes multiple steps: turn on Theater Mode, Silent Mode, and Do Not Disturb, and turn off low heart rate alerts to avoid your sleeping heart rate triggering warnings.

Bedtime mode could include all these steps in one action, and it could work just like on the iPhone. 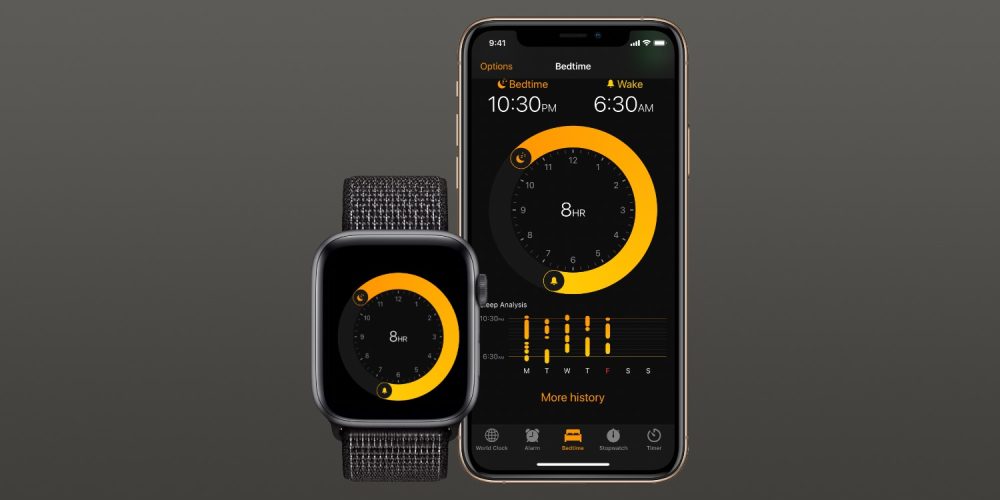 Mockup of how Bedtime mode could look

Tucked away inside the Clock app on the iPhone and iPad is a Bedtime section that includes a really useful dial that lets you set your bedtime, alarm time, and see how many hours of sleep both would equal. The special Bedtime feature even includes unique alarm tones on iOS, but the same feature hasn’t made it to watchOS yet.

I would love to see Bedtime mode on watchOS 6, enhanced with features that optimize the Apple Watch for sleep tracking (even if you still need third-party apps). One of the great things about Bedtime mode compared to Do Not Disturb mode is how easy it is to adjust the dial based on your schedule; it’s inviting and meant to be changed as needed.

Apple’s Workout app is one of my most used apps on the Apple Watch. I even switched from Nike Run Club to Workout to use new run tracking features and the built-in Now Playing card.

There are improvements to the Workout app that would be great for watchOS 6 though.

Clearly that’s because only so much information can fit on the screen at a glance, but I would love the option to scroll down or swipe over and see even more data during a workout. 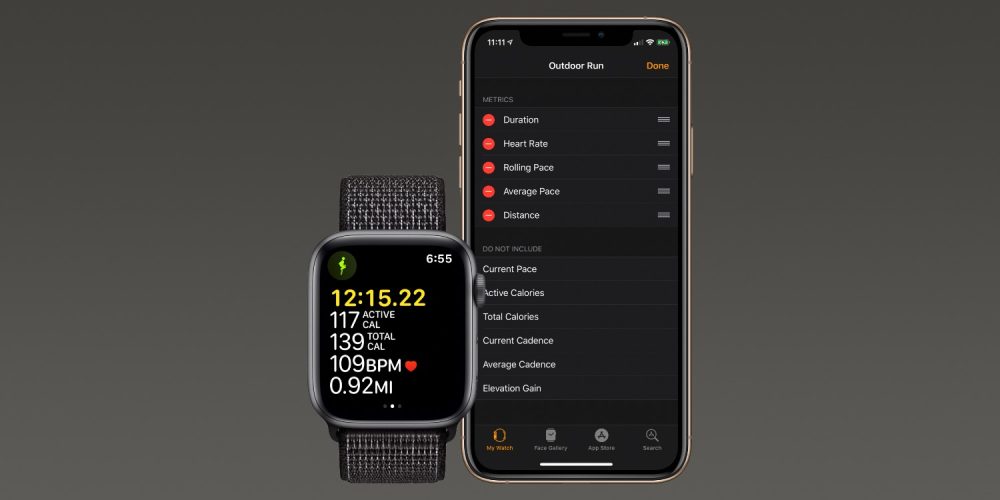 I would also love to see the Workout app learn how to detect personal records for runs without using third-party workout apps like Nike Run Club. Run your fastest 5K (3.1 miles) within that 3.5 mile run? A smart watch should know how to detect that on its own.

watchOS 5 beefed up the Workout app with automatic workout start and stop reminders for select activities. Could watchOS 6 expand the list of supported workouts?

Even better would be upgrading and reframing workout start and stop reminders to true automatic workout detection — Fitbit style — so the watch could classify activity throughout the day as an outdoor walk or indoor run without requiring interaction.

The difference between automatic and manually started workouts is how accurate heart rate and location tracking can be due to how the Apple Watch uses sensors passively by default to preserve battery life, but improvements to the feature should be a goal.

No, no, no. Not a subscription version of Activity Sharing. What would that even include?! I just want Activity Sharing to expand from the current 40 person limit. I love Activity Sharing and how it encourages Apple Watch users to close the rings, myself included, but I’ve had to resort to cutting users from my friends list to add new people. No hard feelings!

Activity Sharing could move from the private group model to the Nike Run Club model, replacing phone numbers and Apple IDs with usernames. Apple Music already does this with its social feature — which even powers a personalized recommendations playlist — and it works great.

Messaging would need to be rethought, but it’s already a bit disconnected today. You often add someone on Activity Sharing with the Apple ID email, then message replies to workouts and achievements typically send from phone numbers. Apple assumes you know both for each connection, but that’s not always the case. 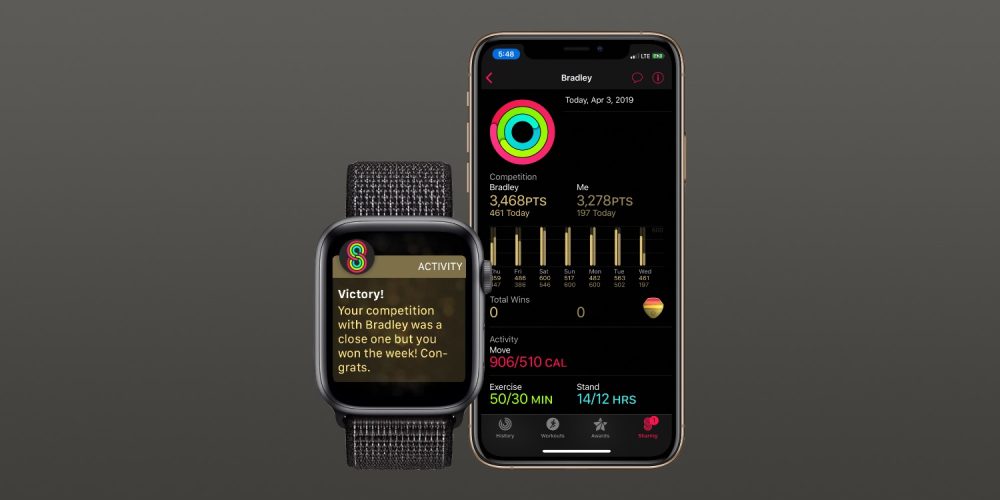 Apple could build on the current Activity Sharing model and follow its current trajectory of first launching the feature then adding competitions by adding two features to competitions: teams and custom challenges.

For example, co-workers could group up to contribute to one of two teams during a competition. Add some camaraderie to the competitive feature. Custom challenges could let you pick specific goals like miles ran per day or week as the competition for the week.

Separately, I would love another feature borrowed from Nike Run Club: alerts for when a friend starts a workout, not just ends a workout. Notice your pal going for a run or hitting the weights at the gym? You might want to join in before it’s too late!

Finally, I wish my Apple Watch would shock me Pavlok-style when I’m about to miss a stand hour. Kidding! But seriously, missing a stand hour alert is the worst.

watchOS 6 could fix a lot that’s wrong with Apple’s own watch faces too. Apple Watch Series 4 expanded and reshaped the display, introducing a new set of watch faces that are either packed with information or visually impressive. We could always use more variety in watch faces regardless of who is designing them. 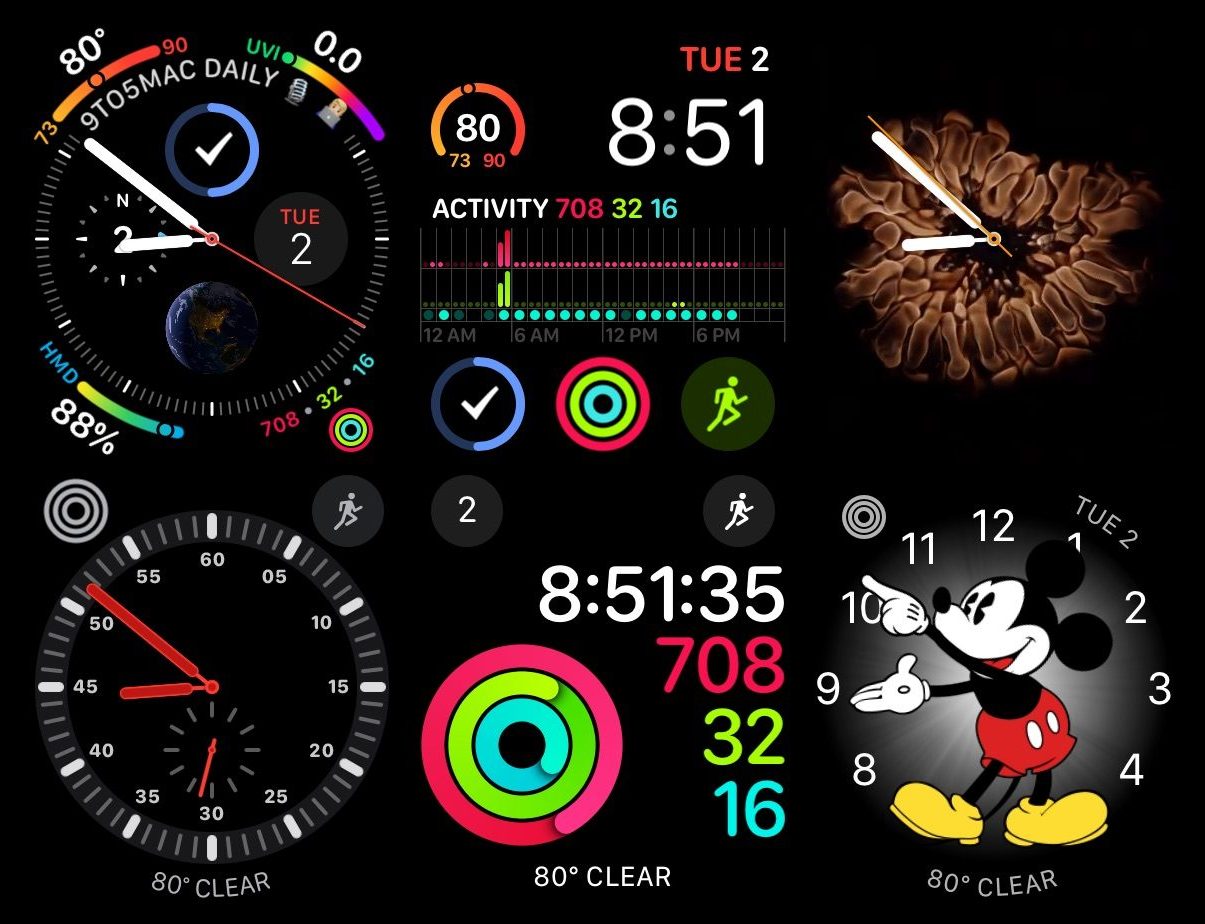 But the Apple Watch Series 4 did a number on the existing watch faces. Curious choices like curving text and tilting text is a step back for a lot of people and their favorite watch faces. Hopefully these design decisions are reconsidered in watchOS 6.

There are small things, too, like no Podcasts app complication for the Infograph and Infograph Modular watch faces, and people still want Siri and LTE complications on all watch faces (not just the Siri and Explorer faces).

Apple Watch has new and existing app opportunities too — some that have been around for years.

For example, watchOS 5 introduced the Podcasts app which supports streaming over Wi-Fi and LTE on its own. I think it’s a great app and I use it regularly without my iPhone.

My one complaint is that the app can feel disconnected at times. Specifically, when you know there’s a new episode of a podcast out because your iPhone sees it, but the Apple Watch app hasn’t updated yet. There’s no pull-to-refresh or Force Touch-to-refresh option. You can request specific episodes with Siri, but UI for looking for new episodes from the watch app would be great.

Others would love to see support for chapters for podcasts that use chapters. Apple’s Podcasts app on the iPhone has full chapter support now, but you can’t view chapter data on the Apple Watch.

The small screen is certainly a space constraint, but I think chapters could work. There’s also a dedicated button for what I think is viewing lists of podcast apps in a playlist or queue, but it’s not super relevant for podcast listening on the Apple Watch and probably carried over from the Music app design. That same button could show chapters for podcasts with support. 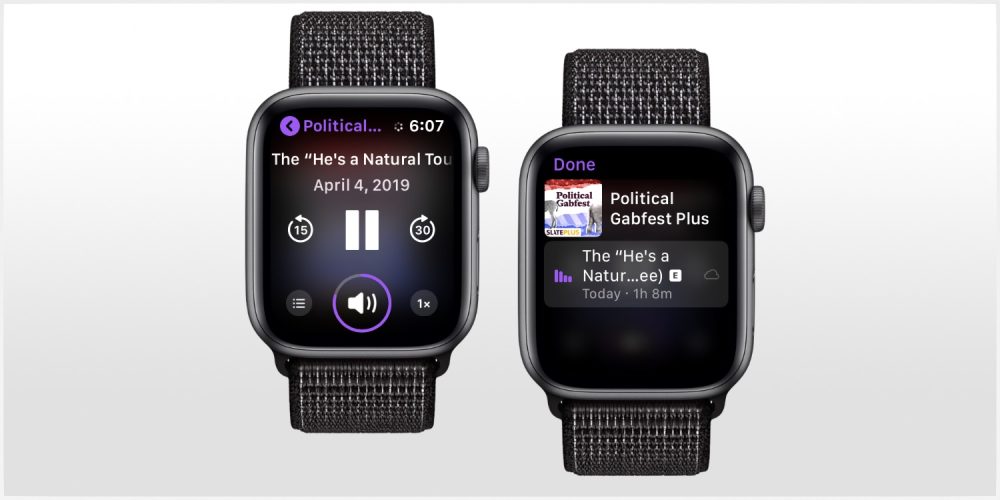 Then there are missing apps and basic improvements to existing apps. Calendar should show more than one month at a time. Mail is well-featured, but could benefit from the ability to send messages to folders. Any version of the Notes and Voice Memos apps are natural fits for the Apple Watch, especially with cellular models encouraging us to leave our iPhones behind at times.

Finally, I’m no developer, but I know there are always more tools that developers want to see for building apps on the Apple Watch — possibly even moving from the current WatchKit model. Maybe watchOS 6 will be the first version to support a new class of watch apps.

More generally, there are lots of small but important tweaks that watchOS 6 could consider. In no specific order, these come to mind for me: 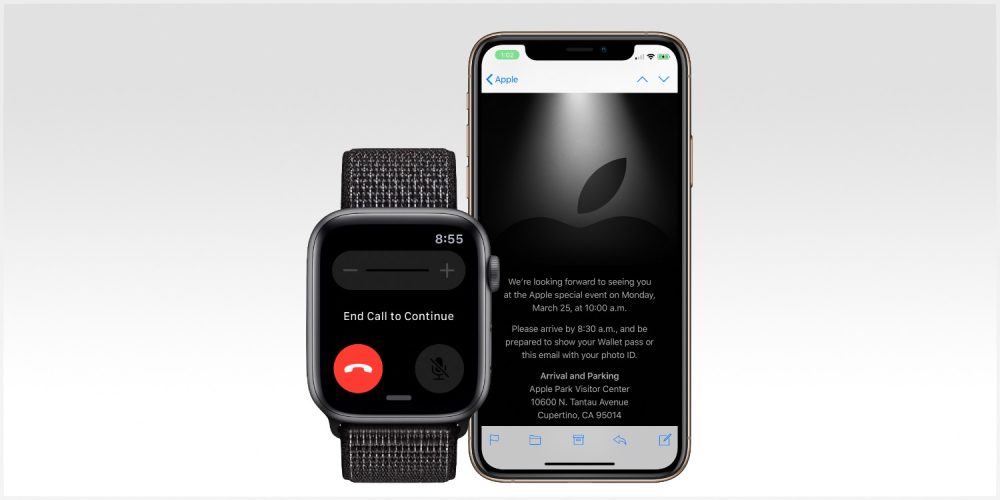