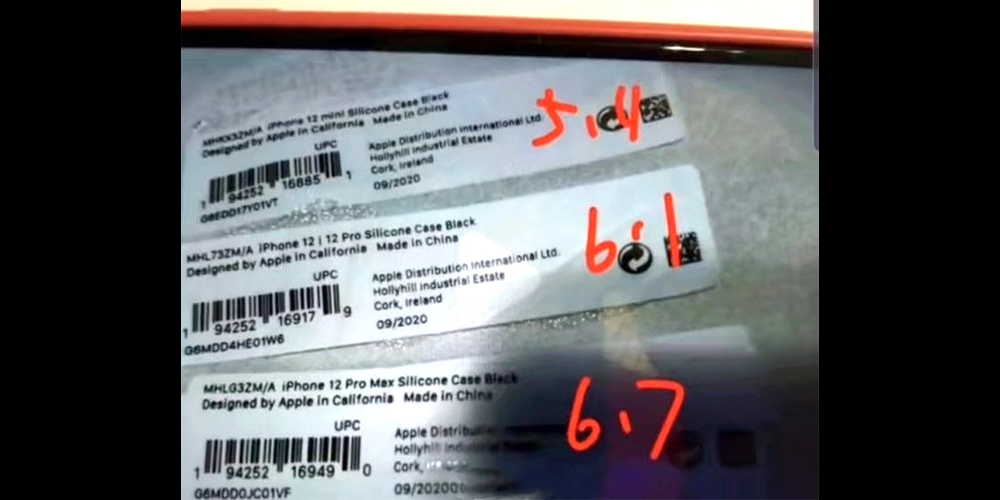 Two leakers with good track records have now both indicated the same iPhone 12 names. Today’s report shows what are said to be stickers for official Apple silicone cases for the new models.

A photo was posted by @DuanRui, who last month showed a pamphlet depicting what turned out to be the correct design for the new iPad Air announced almost three weeks later …

The names shown on the stickers are:

The stickers show a single case for the iPhone 12 and iPhone 12 Pro, indicating that these models will be externally identical at least in dimensions and placements of camera module and buttons.

The iPhone 12 names suggested line up with the four models we’re expecting:

All four of this year’s models are expected to have OLED screens, and to include support for 5G mobile data. The iPhone 12 Pro and Pro Max are expected to offer three cameras and a LiDAR sensor for more accurate focusing, better Portrait Mode results and improved AR performance.

What we don’t know is whether mmWave 5G will be limited to the Pro models, or whether it will be restricted to certain countries – or both. We did, however, get a recent clue that mmWave 5G support may be limited to those countries with greater rollout of the high-speed mobile data standard.

“We believe that due to the impact of COVID-19, the global 5G millimeter wave base stations are lower than expected.”

If the issue is reduced rollout of base stations, meaning that availability of the faster 5G standard is lower than expected, then the most logical inference would be that there is little point in offering mmWave 5G in some countries because you’ll hardly ever get access to it there. Given the substantial expense of supporting the faster standard, it would make sense to limit it to those countries with decent rollout of base stations, and expand into other countries next year.

Exact timing of the launch and availability of this year’s iPhones remains unknown, Apple saying only that it will be ‘a few weeks later‘ than usual.