Periodically, Apple updates App Store prices in certain regions to account for global changes in exchange rates. Today, Apple has notified developers that it will be raising app prices for customers in Norway in response to currency fluctuations. 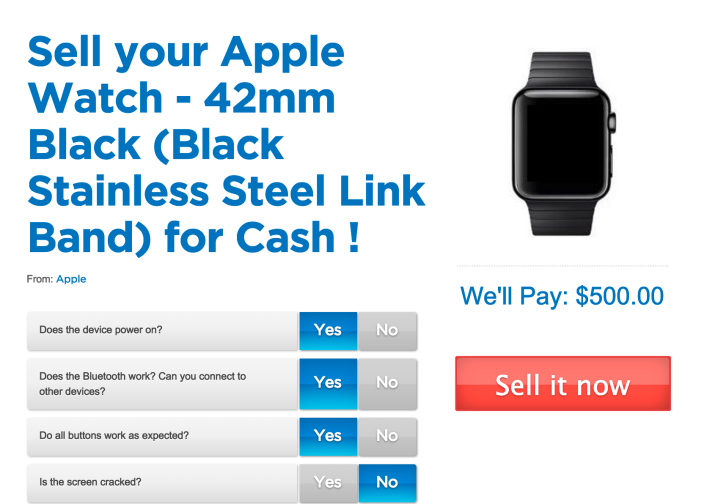 While Apple Watch models were selling for a premium on eBay and elsewhere for quite a while after launch, now that the device is in Apple stores and stock of most models almost caught up to demand, trade-in services have officially started accepting the device. One of the first bigger companies to announce support for Apple Watch is NextWorth, which as of today will buy your Apple Watch, but without the eBay premiums. The company is capping Apple Watch trade-in payouts at $500, and you’ll be getting much less than that for the cheaper models that start at around $350 from Apple. END_OF_DOCUMENT_TOKEN_TO_BE_REPLACED

Square Enix’s The World Ends With You

Buying an app from the App Store is designed to be as easy as possible. A large button with a price tag sits as close to the app’s icon and name as possible, while additional details linger below. You’re not supposed to think or worry too much about each purchase — the transaction is impulse-driven when the price is low — and the implication is that the app will work when you get it, and keep working for a long time thereafter.

But what happens when an app — marketed as compatible with current iPhones, iPads, and iPod touches — is never updated for the latest version of iOS, and either stops working after an iOS upgrade, or never works at all on new devices? That’s the situation buyers of Square Enix’s $18 The World Ends with You: Solo Remix (and $20 iPad version) have found themselves in since iOS 8 was released. The game’s description claims that it “requires iOS 4.3 or later” and is compatible with devices that shipped with iOS 8, but it wasn’t actually iOS 8-compatible. Yesterday, Square Enix publicly flip-flopped on whether it would leave the game unplayable or fix it. Before changing its tune, the company told customers that they’d need to continue to keep using iOS 7 in order to play the game — an unrealistic alternative, though one that’s faced by users of numerous iOS apps that aren’t being updated by their developers.

By considering abandonment of the 69% of iOS users who are currently on iOS 8, Square Enix wasn’t just making a business choice; it was also spotlighting the risk App Store customers take every time they purchase an app. And it also revealed how long-unsolved App Store listing ambiguities are subjecting users, developers, and Apple itself to unnecessary problems.

END_OF_DOCUMENT_TOKEN_TO_BE_REPLACED

Apple has sent an email to developers informing them of upcoming changes to app pricing in Canada, the European Union, Norway, Iceland, and Russia. These changes, which take effect later this week, are not the same as the recent change to country-specific VAT rates, and impact a wider range of markets.

The pricing updates are being implemented to accommodate changing tax and currency exchange rates. Prices will go up for customers in all of the affected countries except Iceland, which will see a decrease. Russia’s prices will “change,” according to the email, but there aren’t any additional details on what that may mean.

END_OF_DOCUMENT_TOKEN_TO_BE_REPLACED

A new report by Re/code gives some extra details about Apple’s future plans for its streaming service, Beats Music. A few weeks ago Apple was reportedly looking to push prices down, although specifics were not known at the time.

Today, Re/code says that Apple wants to cut prices in half, from $10 a month to $5 a month. This would be part of a relaunch of the Beats Music service — exactly what a ‘relaunch’ entails is not yet known. It is possible that Apple will disassociate the Beats brand from its streaming service.

END_OF_DOCUMENT_TOKEN_TO_BE_REPLACED

Members of the UK government are seeking to close a tax loophole that currently allows online music, app, and book downloads to avoid the country’s 20% “value added tax” in favor of much lower international tax rates, reports The Guardian. If the push is successful, iTunes customers in the UK will instead be taxed at the appropriate rate for their own country.

However, the new law won’t go into effect until January 1, 2015, so there’s still time for things to change. Supporters of the change say that it will lead to more fair competition among foreign and domestic companies, since UK-based companies are currently at a major disadvantage due to the higher tax rate.

END_OF_DOCUMENT_TOKEN_TO_BE_REPLACED

The results of the Fair Labor Association’s investigation into Apple’s suppliers beginning with three Foxconn facilities officially published yesterday. While finding excessive working hours and many violations of Chinese labor law, Foxconn and Apple agreed to reduce workweek and overtime hours within Chinese law to 49 hours per week and 36 overtime hours per month based on the FLA’s recommendations. Foxconn will also hire tens of thousands of new employees and implement a compensation package to make sure workers’ salaries remain the same amid reduced working hours.

In the interview above with Reuters, head of the FLA Auret van Heerden talked about the investigation and noted the agreement could set a new standard for working conditions throughout China. One unanswered question is whether the agreement will lead to higher prices for consumers (which is not necessarily a bad thing)…