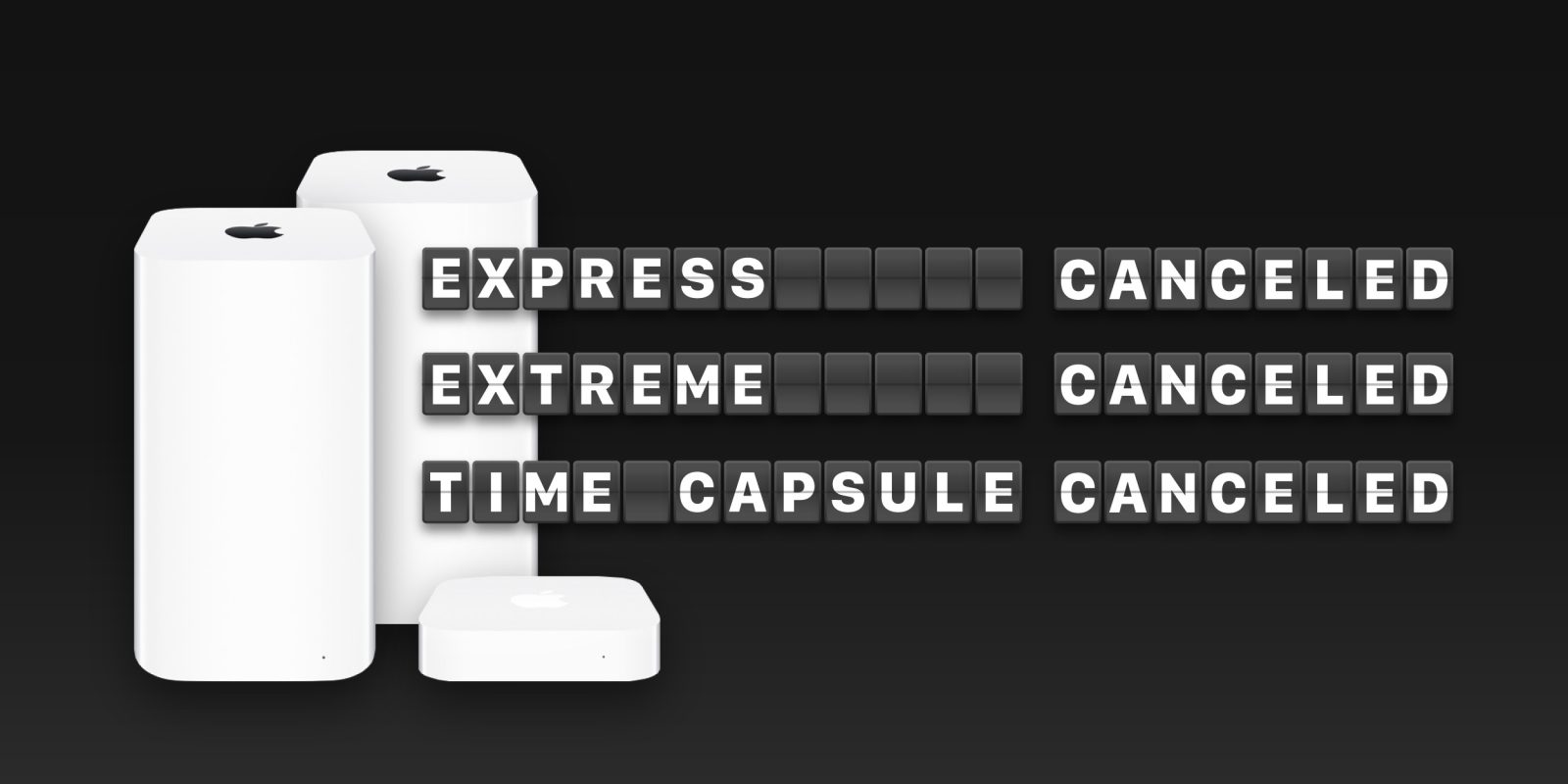 Apple is officially exiting the wireless router business and selling off its remaining inventory of AirPort products. This includes the AirPort Express, AirPort Extreme, and both models of AirPort Time Capsule. Apple shared the news in a statement to 9to5Mac:

We’re discontinuing the Apple AirPort base station products. They will be available through Apple.com, Apple’s retail stores and Apple Authorized Resellers while supplies last.

While the news is disappointing for fans of Apple’s routers, the end of the AirPort line is no surprise either.

Bloomberg reported back in November 2016 that Apple had disbanded the team responsible for developing Apple’s routers, and in January 9to5Mac was first to report that Apple Stores started selling third-party mesh Wi-Fi routers from Linksys.

At the time, Apple told us that its AirPort line would remain — with the mesh Wi-Fi routers adding a solution for larger homes:

People love our AirPort products and we continue to sell them. Connectivity is important in the home and we are giving customers yet another option that is well suited for larger homes.

Apple and third-party vendors will continue to sell the AirPort Express, AirPort Extreme, and AirPort Time Capsule, but only while supplies last.

Customers can still expect these products to be supported for years to come, but not indefinitely and new hardware revisions are not coming. Apple could always choose to reenter the market if it decides it can make a meaningful impact, but for now Apple is conceding the market to ISP-supplied routers and other third-party solutions. 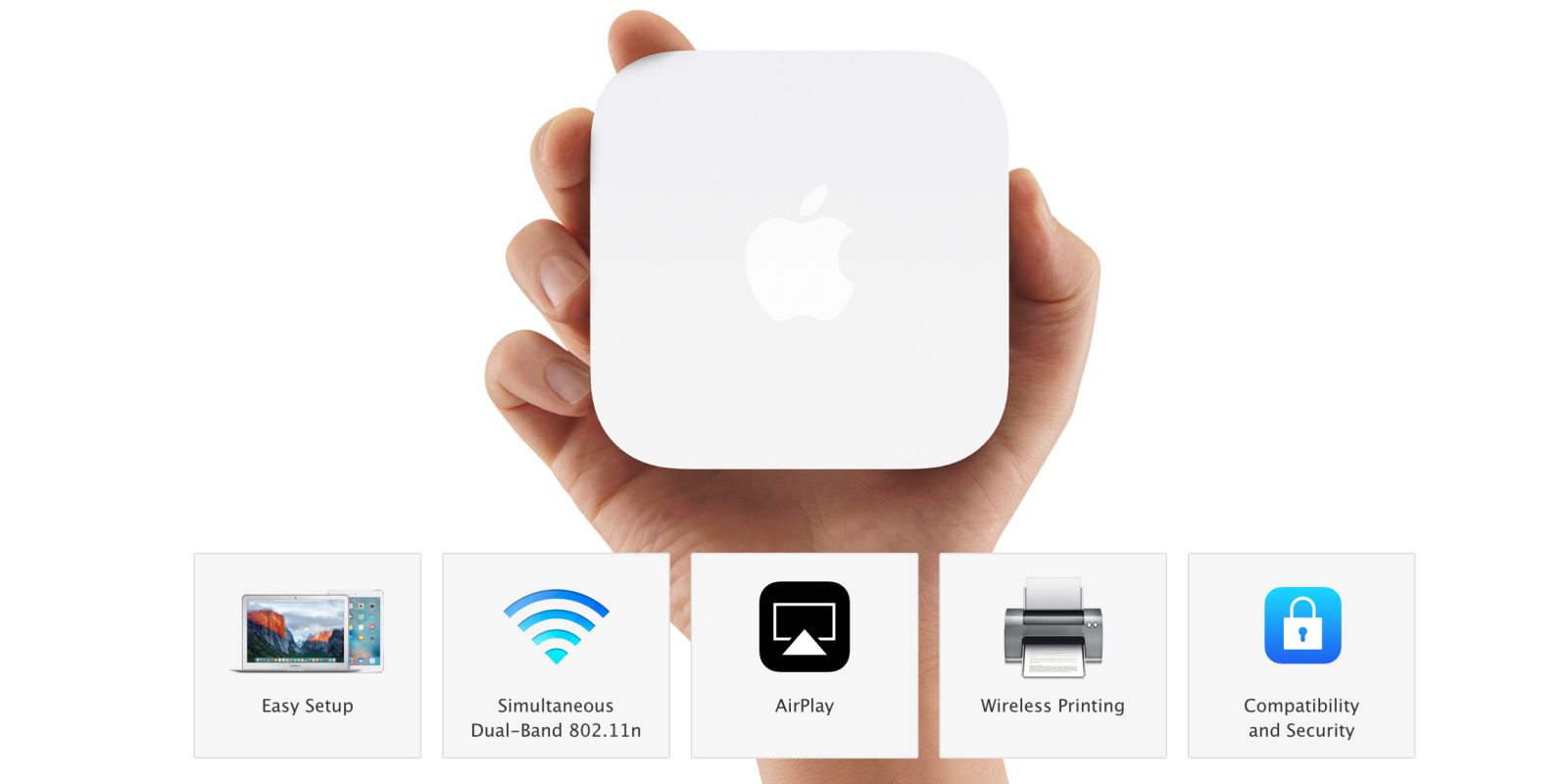 Premium price and lack of hardware revisions in recent years aside, Apple’s AirPort products did offer some unique and superior features to competing routers.

Apple’s AirPort Utility app (which needs updating for iPhone X and larger iPads) and iOS Wi-Fi Settings integration made setting up and managing AirPort routers simpler than most third-party routers with clunky apps. AirPort Express let you turn any stereo into an AirPlay speaker with line-in, and USB printers could be shared across the network and accessed from Macs.

AirPort Time Capsule included a 2TB or 3TB drive for automatically backing up your Mac over Wi-Fi with Time Machine, and AirPort Extreme let you easily connect a USB hard drive to your network for the same feature. 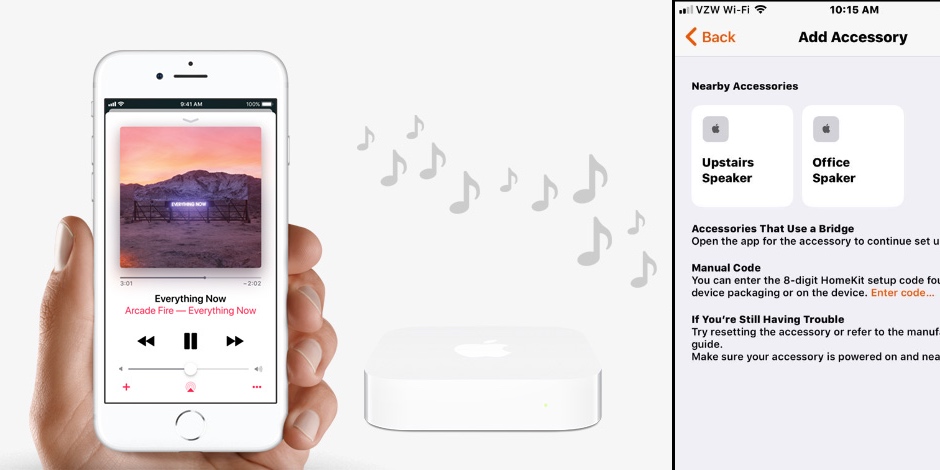 AirPrint printers have since replaced the need for networking USB printers with AirPort Express, however, and these add support for printing from iOS.

Apple now offers its own AirPlay speaker with HomePod, and AirPlay 2 will bring even more options to market including Apple TV-connected speakers, new Sonos speakers, upcoming Beats speakers, and more.

There is also an existing market of peer-to-peer AirPlay speakers, but reliability of AirPlay 1 with third-party speakers is mixed at best.

Apple officially discontinuing AirPort Express adds a new layer of uncertainty to the brief appearance of AirPlay 2 support seen in iOS 11.4 beta. Support appeared to be present when used with an unreleased firmware update. AirPlay 2 support would be a nice perk for existing AirPort Express users, but shipping a major new feature for a recently discontinued product would be odd (but still welcome!). 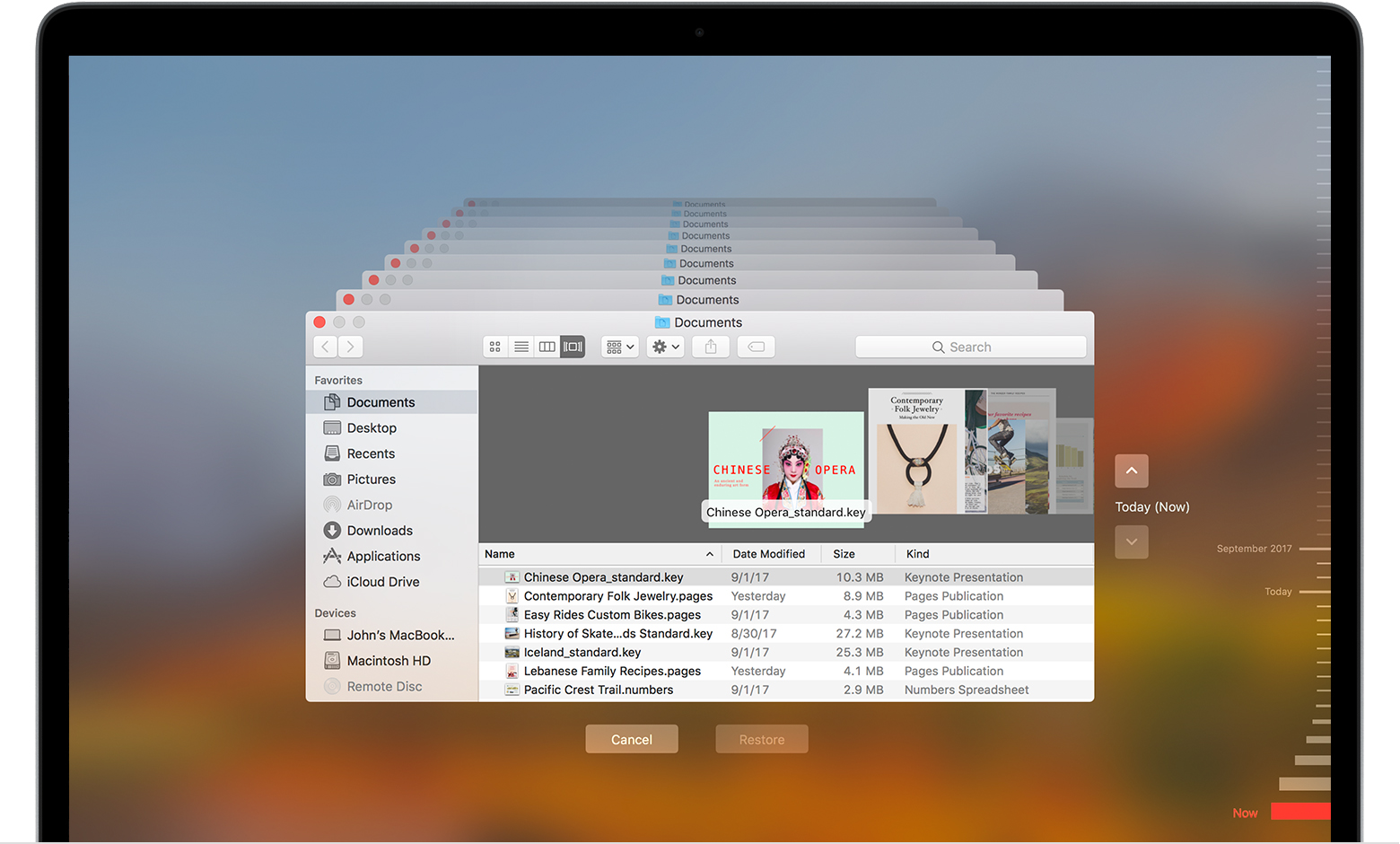 In terms of Time Machine backup alternatives, Apple has almost solved the backup problem with iCloud — but not entirely.

iPhones and iPads can make full backups to iCloud over Wi-Fi and Macs can sync photo libraries, iTunes libraries, and Documents and Desktop to iCloud, but there are still limitations on backing up elements of macOS to iCloud including the 2TB size limit. More practical is relying on Time Machine for local backups using connected hard drives or network attached storage like Synology.

The news also means that Apple’s high-end AirPorts will top out at 802.11ac and not support upcoming 802.11ad and 802.11ax advancements in Wi-Fi technology. Apple is also not offering its own solution for mesh Wi-Fi systems that are growing in popularity for larger homes with lots of connected devices. 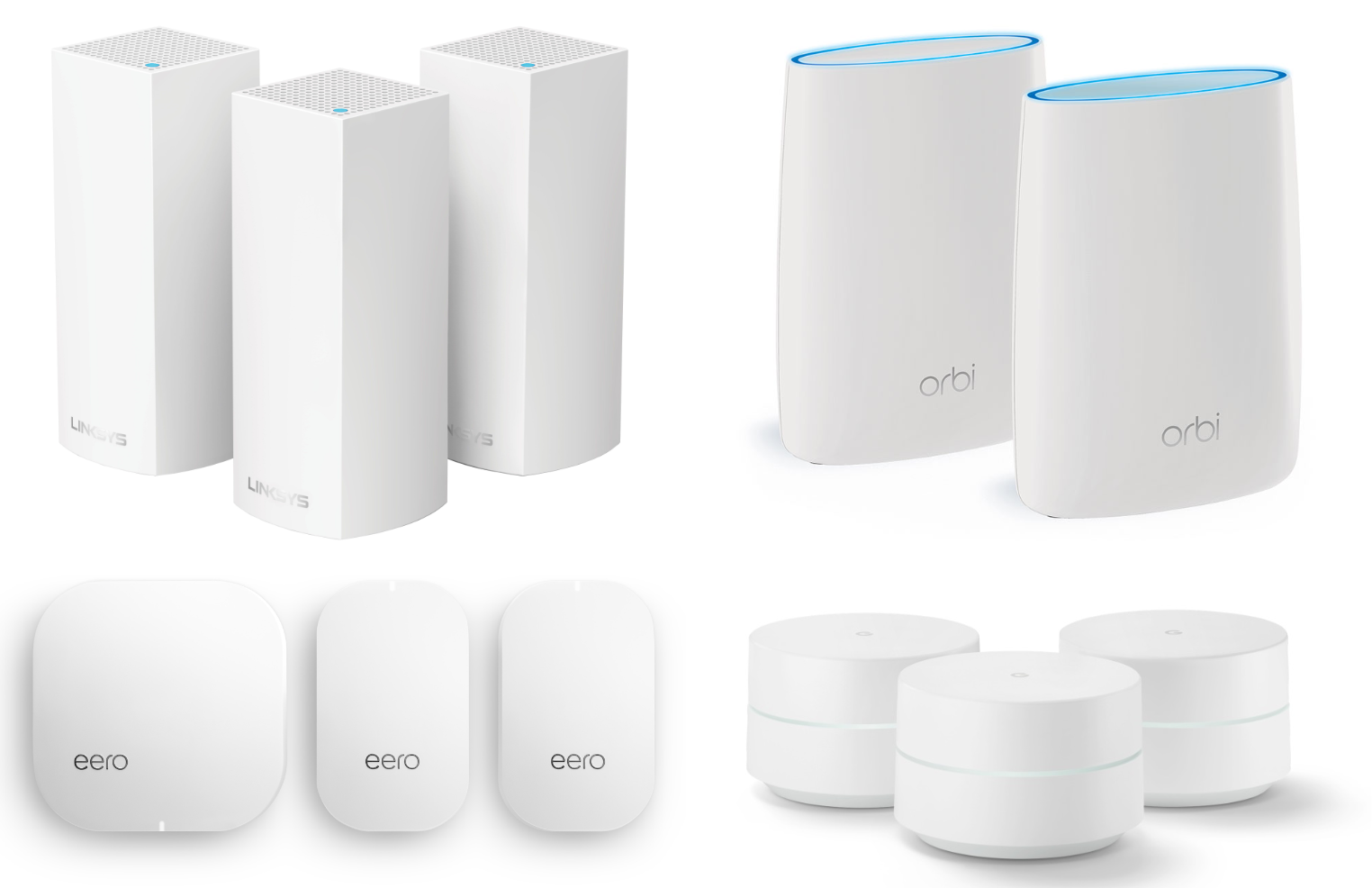 The good news is a lot of newer routers take design cues from Apple’s now-discontinued AirPort line. Cleanly shaped white towers and unassuming pucks have largely replaced routers that look like robot insects with airplane cockpit lights for eyes — although you can still find wonkier styles at the high end.

Apple’s AirPort line was also growing increasingly dated — especially for its premium price — without a mesh tri-band system available (and extending range with AirPort Express only got so far). Apple will be pointing customers to AirPort alternatives soon, but for now here are a few tried and tested mesh Wi-Fi system options:

You can also rely on the modem/router combo supplied by your Internet service provider, but that usually comes with monthly rental fees and sub par performance. 9to5Toys regularly features both modem and router deals including:

So we’ll continue to see AirPort hardware sold until inventory is depleted, then Apple’s routers will join most of the iPod lineup and Apple’s Thunderbolt Display in being officially sunset.

In the case of Apple’s pro display, it has since promised a forthcoming replacement that will work with the new Mac Pro due out next year after a rocky experience with relying on LG for a high-end solution.

Apple has now published a support document detailing what to look for when replacing your AirPort devices.