Plans for iPhone assembler Foxconn to acquire Sharp, allowing it to move into making displays for future devices, now appear in significant doubt. Initially reported in Japan as a done deal, the WSJ quickly reported that Foxconn was “delaying” signing – and the same source today reports that talks have broken down.

Update: Foxconn has denied the Reuters report, stating that the claim is “completely inaccurate and totally without foundation.” The company told us that increased automation will result in reduced recruitment, but that there are no plans to reduce its workforce “now or anytime in the future.”

Foxconn, the lead assembler for iPhones, is planning to cut its workforce despite widespread expectations that Apple will today announce record sales of its smartphones, reports Reuters. It’s likely that the proposed reduction in staffing relates to Foxconn’s work for other manufacturers, who account for around 60% of the company’s revenues. Also, Apple sells a lot more stuff during the run up to the holidays so seasonal workers might be let go after demand is met.

Special assistant to the chairman and group spokesman Louis Woo did not specify a timeframe or target for the reduction, but noted that labor costs had more than doubled since 2010 […]

“We’ve basically stabilized (our workforce) in the last three years,” Woo said. When asked if the company plans to reduce overall headcount, he responded “yes”.

Foxconn experienced double-digit revenue growth from 2003 to 2012, but has seen that growth slip in the past couple of months as the PC market contracts and smartphone growth rates slow. The company has been trying to work its way up the Apple food-chain from assembly and low-cost components into more expensive parts like displays.

Foxconn hoping to make future iPhone screens, get more of the Apple pie 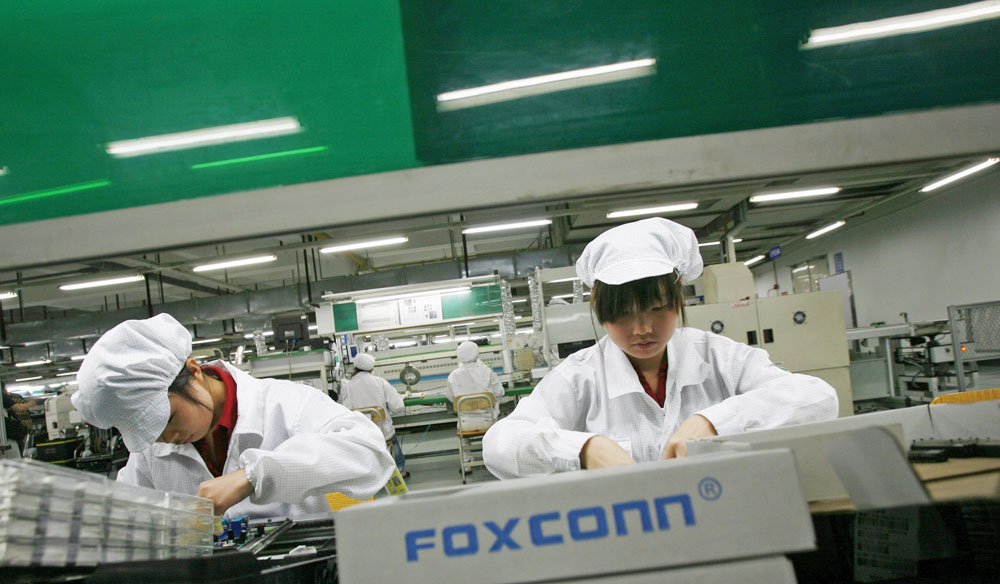 iPhone assembler Foxconn is apparently hoping to move beyond its relatively low-margin work into more profitable high-end component manufacturing in order to take a bigger slice of revenue from Apple, reports the WSJ.

Apple Inc.’s major assembler Foxconn is in preliminary discussions with a provincial government in northern China for an investment in a new factory that would make high-end screens for iPhones and other mobile devices, people familiar with the talks say.

Foxconn already manufactures some iPhone components, but currently only low-margin ones like metal casings and cables …  END_OF_DOCUMENT_TOKEN_TO_BE_REPLACED

In what would be a rather amusing twist, future iPhones could be built by Google robots as Google’s robotics division assists Foxconn to “speed up robot deployment” at its factories.

The WSJ reports that Foxconn was looking for assistance in automating its production lines, while Google is aiming to introduce robots to manufacturing processes that have so far been largely manual – electronics assembly being a key example. It takes around 600 people to make each iPhone.

Foxconn has been working with former Android executive Andy Rubin since last year to carry out the U.S. company’s vision for robotics.

To speed up robot deployment at its own factories, Foxconn Chairman Terry Gou met with Rubin in Taipei recently and they discussed new robotic technologies, they said.

At the meeting, Gou expressed excitement over new automation technologies demonstrated by Rubin, they said. Rubin also asked Gou to help integrate a technology company that Google is acquiring as Foxconn’s strength lies in mechanical engineering.

Google has acquired eight robotics companies over the course of the past year, and is believed to have ambitions to create a robotic operating system that would be to manufacturing what Android is to smartphones. Foxconn is looking to reduce operating costs and boost efficiency.

“Foxconn needs Google’s help to step up automation at its factories as the company has the lowest sales per employee among the contract makers, given its large workforce,” said Wanli Wang, an analyst at CIMB Securities. The source also claimed that Apple is looking at displays ranging from 46 inches to 55 inches, meaning the company likely wouldn’t rely on Sharp’s plants best suited for production of 60+ inch panels: END_OF_DOCUMENT_TOKEN_TO_BE_REPLACED

First noticed by game developer CMA Megacorp, the iPhone 5 appears to react differently than previous generations of the device when sliding a finger diagonally across the screen in quick succession. The average user might not notice the glitch, but the issue could be a problem for game developers that rely on quick diagonal scrolling and swiping motions. As highlighted by Recombu in the video above, “the problem is exacerbated by scrolling diagonally and as you can see only occurs on the iPhone 5.” In the video, we see the theory put to the test on two iPhone 4Ss and two iPhone 5s, one of each running iOS 6.0 and 6.0.1, indicating the issue might indeed be hardware related.