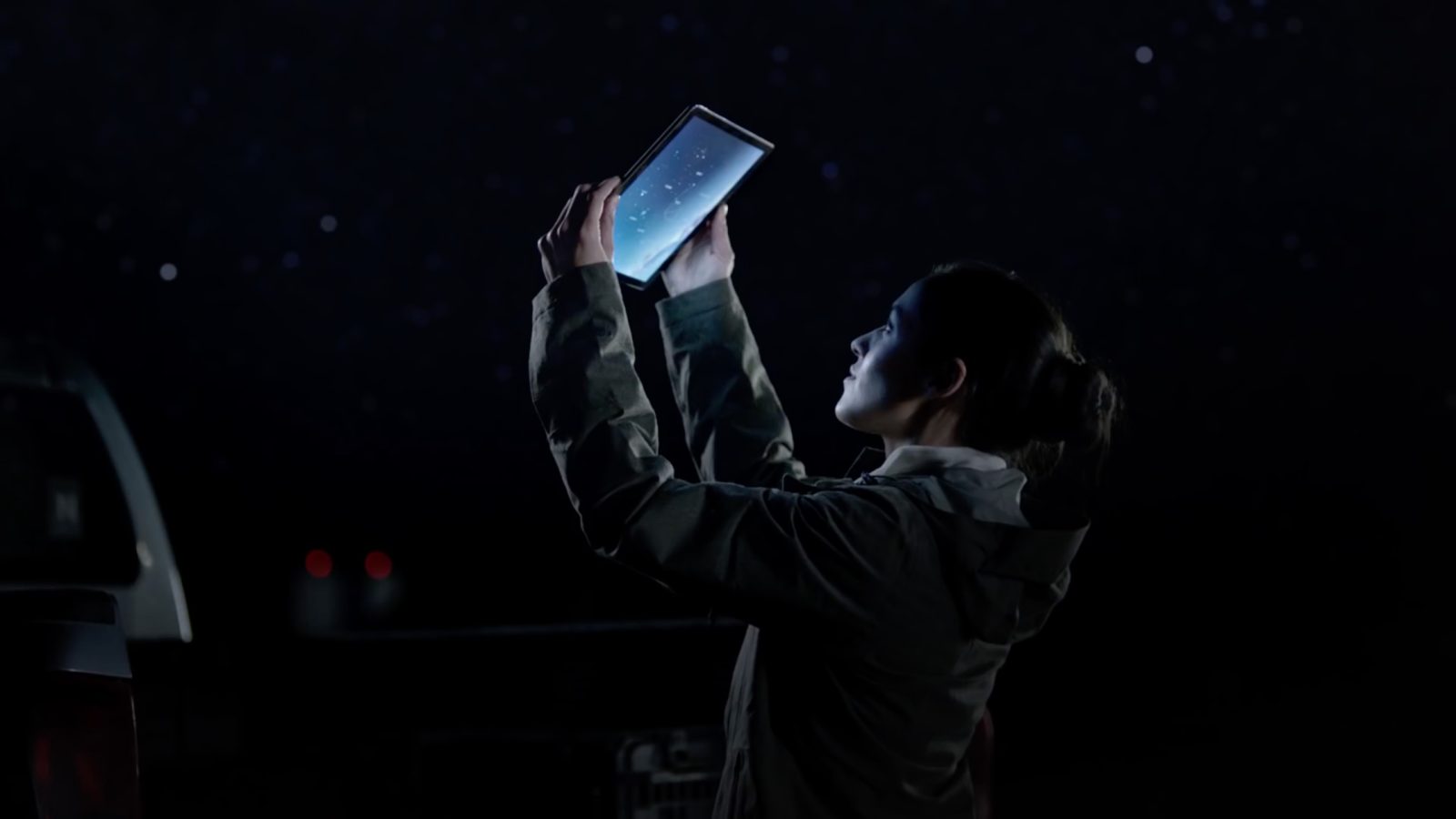 Silver aluminum, once the defining look of Apple products, has been met with increasing variety over the last several years by a range of colors and finishes that customers can choose from. One of the earliest and most popular options – space gray – has permeated across almost every product line Apple offers.

Yet, ubiquity has not brought consistency. Each new generation of a product seems to bring with it a slightly different take on space gray. Those with large device collections have noted the discrepancies between shades, and discussions brew online over the term’s exact definition.

While subtle variations in material, texture, lighting, and even the shape of a product can play tricks on the eyes, every device Apple currently offers or has produced in space gray can be grouped into one of several loosely defined categories. Below, we’ve cataloged and categorized the vast universe of Apple’s recent dark material finishes in an attempt to unravel the mysteries of space gray. 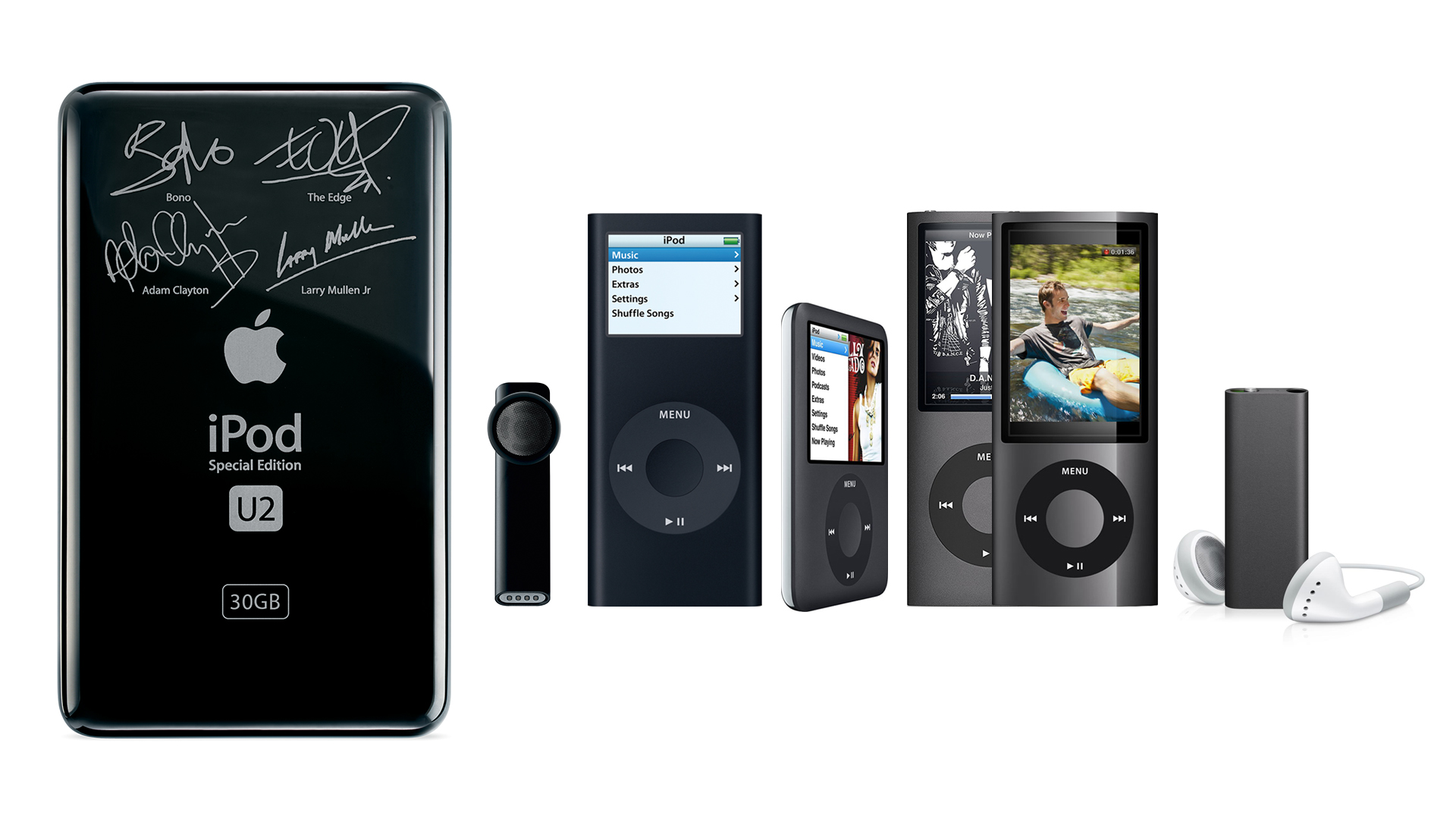 Long before our space gray odyssey began in 2013, Apple manufactured several devices in dark stainless steel or anodized aluminum tones. The knowledge and expertise gained from these early products would undoubtedly help Apple produce custom finishes at a much larger scale on iPhones and iPads years later.

One of the first devices to get a dark metallic treatment was the second version of the iPod U2 Special Edition. While the original U2-branded iPod sported a black and red faceplate with a silver stainless steel back, an upgraded model introduced in June 2006 and based on the 5th-generation iPod had a darkly tinted back casing. A few months later, the 2nd-generation, aluminum bodied iPod nano debuted in five new anodized colors, one of them being an ultra deep black. 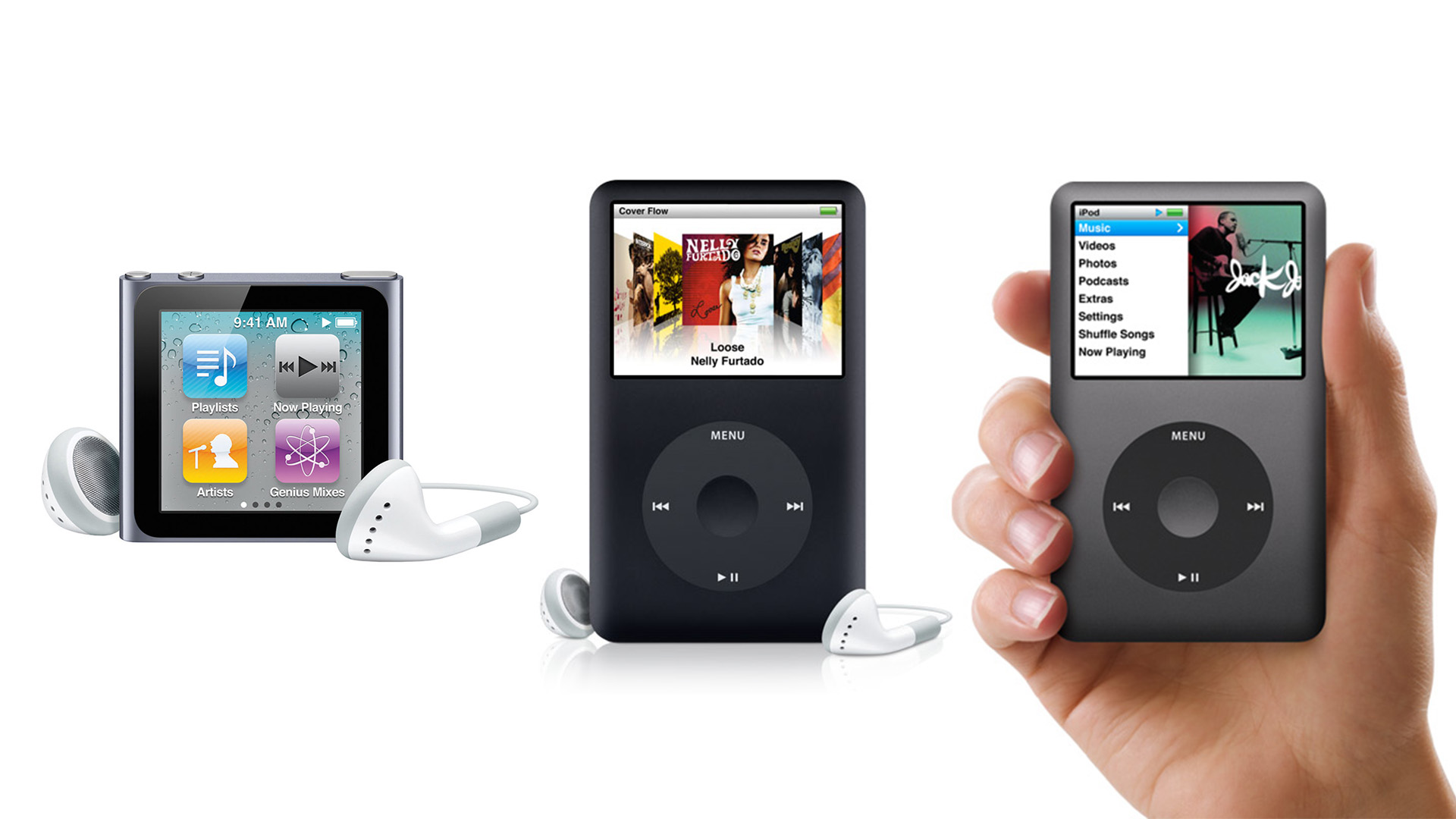 As the entire iPod line moved from plastic to aluminum housing, the iPod shuffle, classic, and nano would all be offered with black finishes at various times. The first-generation iPod touch was accented with a dark gray anodized aluminum bezel. An update to the iPod classic in September 2008 saw its faceplate change from a deep black to a shade of dark gray, making it perhaps the earliest recognizable example of what we’d call space gray today.

In September 2010, the 6th-generation iPod nano was announced in a shade of gray Steve Jobs called “graphite,” although references on Apple’s website also used the term “charcoal” to describe the color. 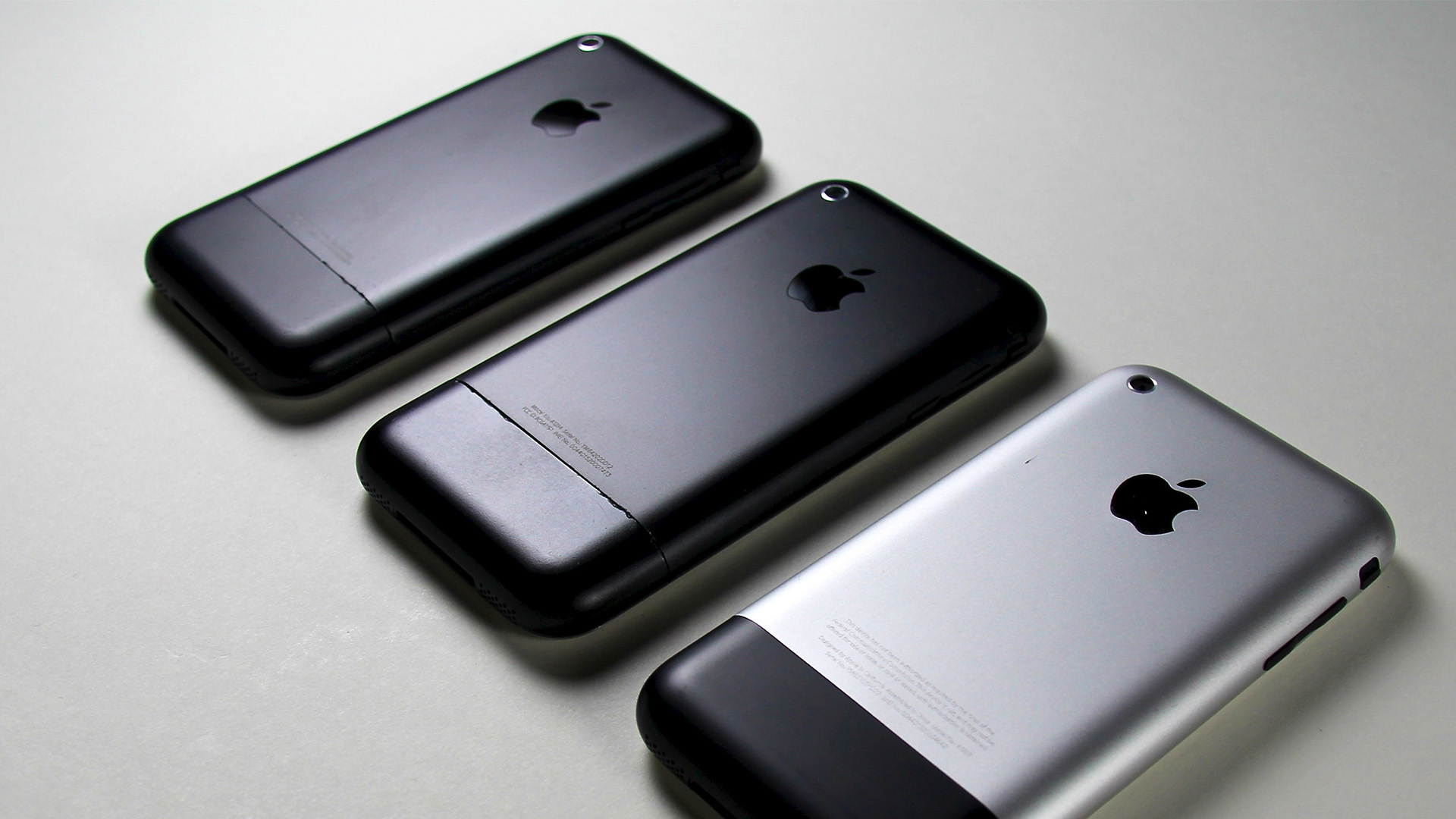 Perhaps most interestingly, Apple also produced several prototypes of the original iPhone with a very dark gray, nearly black finish. Photos of the prototypes from collector Jim Abeles show the unreleased phones next to their silver twin, identical except in finish. While Abeles doesn’t have any further information on the prototypes beyond their 2006 date of manufacture, the color is strikingly similar to the iPhone Bluetooth Headset accessory that Apple released alongside the first iPhone in 2007. 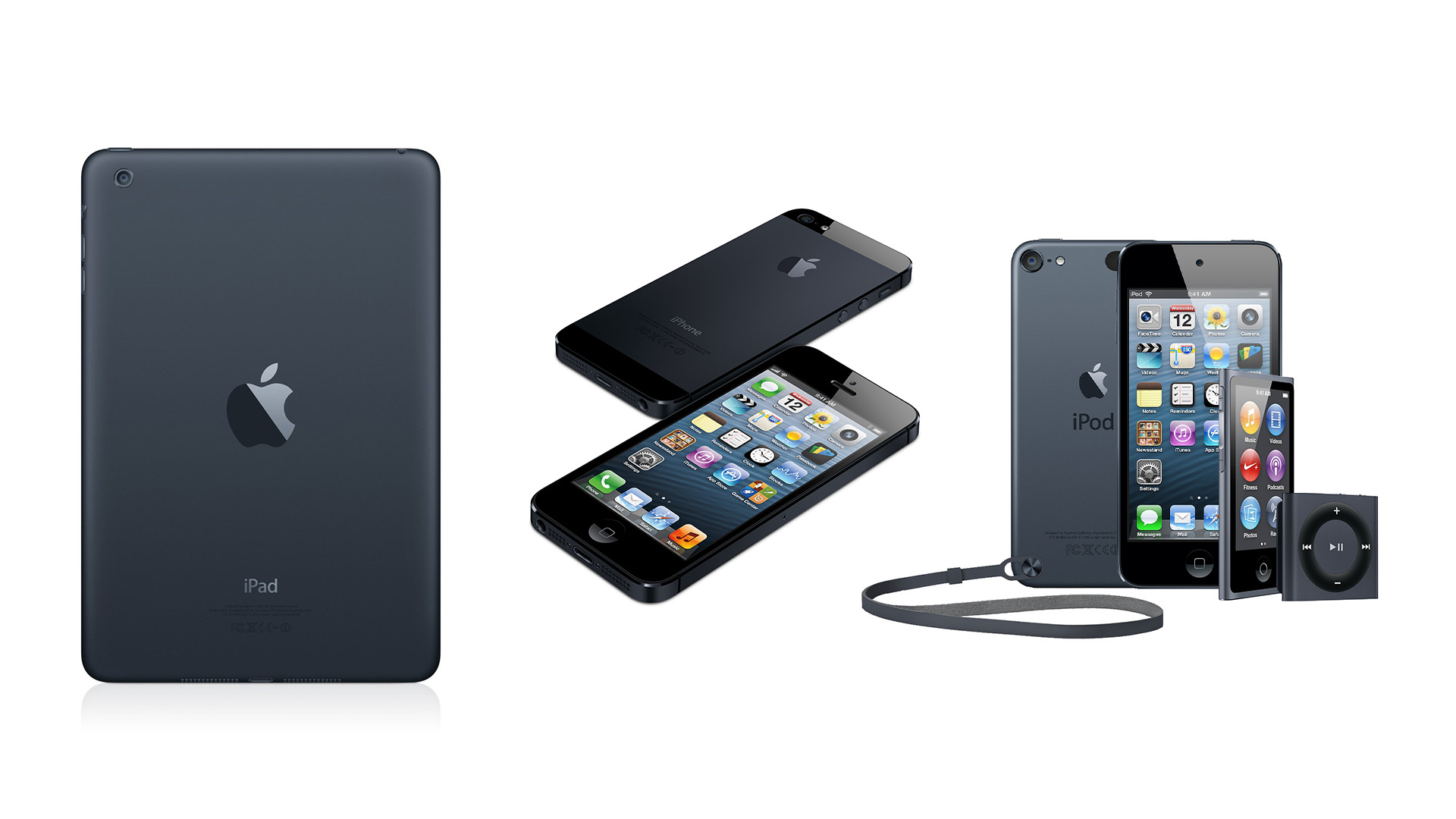 Apple’s September 2012 keynote introduced both the iPhone 5 and a matching iPod touch, nano, and shuffle in a brand new color: slate. Distinctively gray, but with a slightly blue hue, slate can easily be called a direct predecessor to space gray. One month later, the first-generation iPad mini became the first (and only) iPad ever released in slate. While photos of a 9.7-inch iPad in a matching hue circulated online, the device was never released. In 2013, slate would disappear entirely, replaced by space gray.

One of the reasons for slate’s short lifespan may be due to widespread reports from iPhone 5 owners that the finish chipped and scratched easily, a phenomenon that became known as “scuffgate.” Apple responded to the issue, saying the wear customers experienced was “normal,” but future space gray finishes have proved more resilient to scratches and dings. 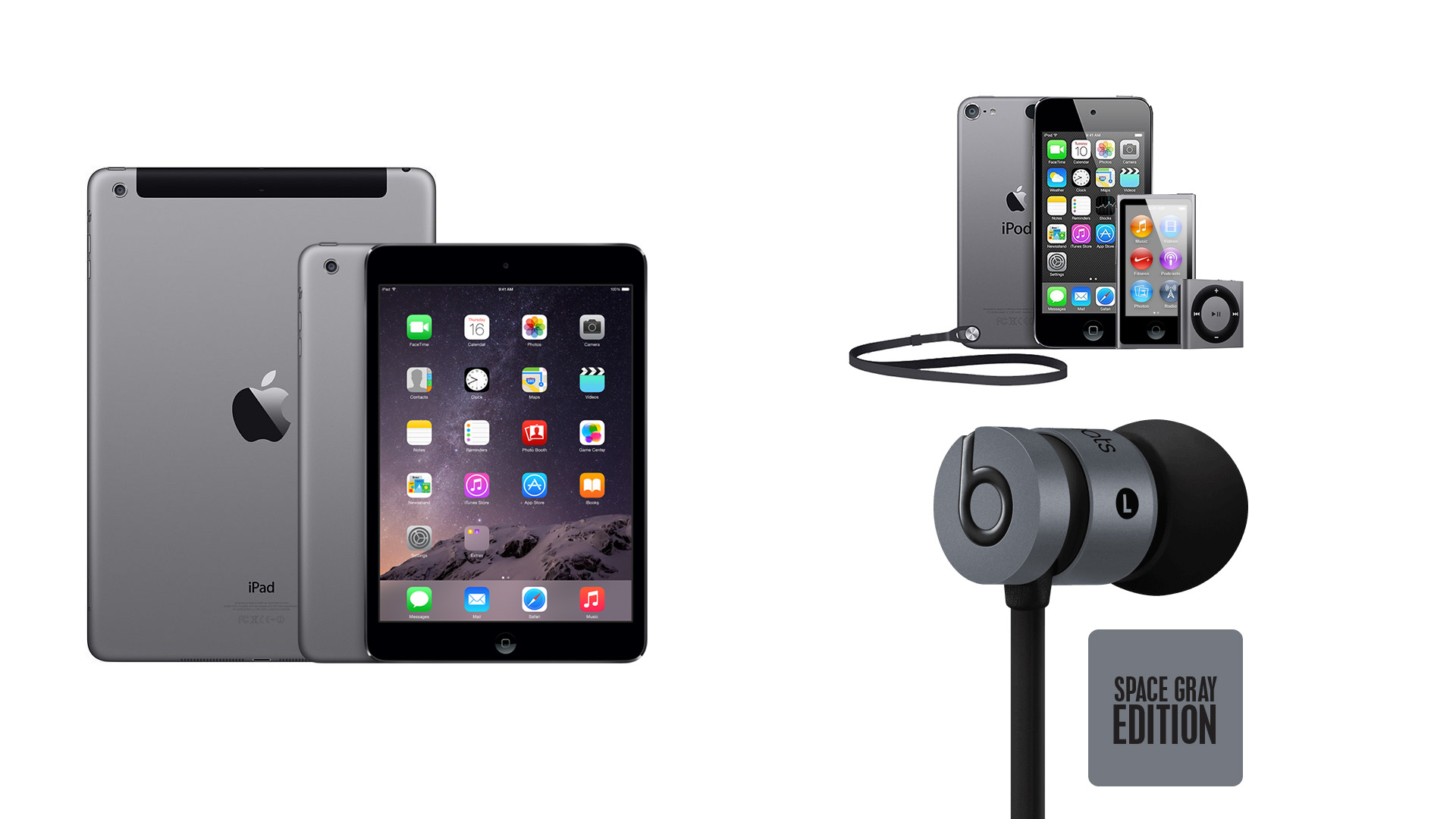 In October 2013, both the iPad mini 2 and iPad Air debuted in space gray. Apple continued to sell the original iPad mini at a lower cost, also refreshing it with the space gray casing.

Strangely enough, the only other product sold in the original space gray color wasn’t manufactured by Apple at all. Prior to acquisition in 2014, Beats Electronics released special edition models of their urBeats earbuds to coincide with the launch of the iPhone 5s, offered in silver, gold, and space gray. 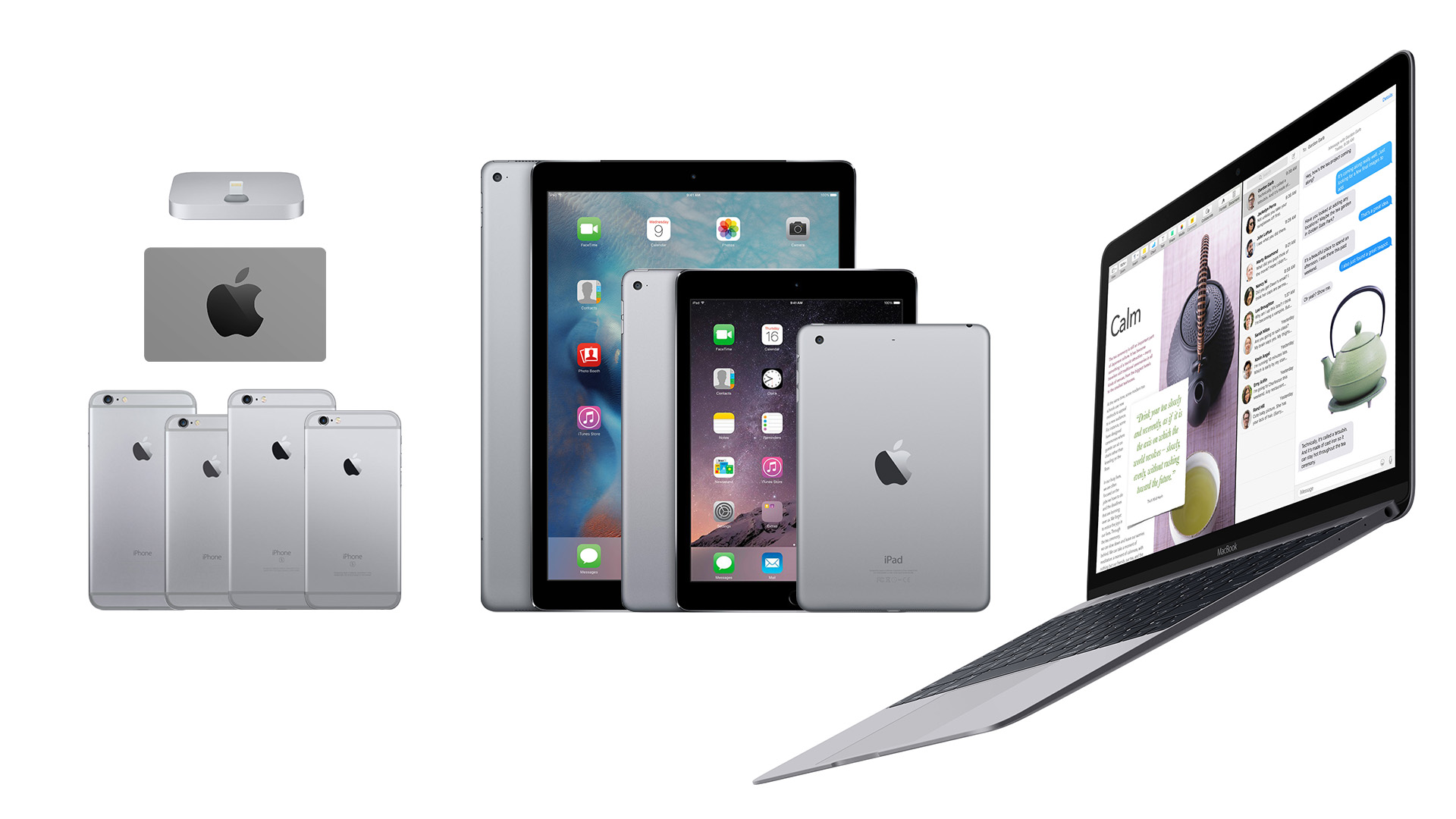 For three years in a row, new iPhones brought new gray aluminum finishes. A lighter version of space gray made its debut with the iPhone 6 and 6 Plus in September 2014. The same shade again extended to the new iPad Air 2 and iPad mini 3 a month later. This time around, existing iPads would continue to be sold alongside the new devices in the original, darker shade of space gray.

While Apple didn’t note the subtle color change onstage or on their website, “space gray 2” would quickly become the most common shade on Apple products going forward. In November 2014, color matched Apple store gift cards were released that were similar in appearance to the new finish.

The first Mac released in space gray, the 12-inch MacBook, followed in March 2015. In September of the same year came the iPhone 6s and 6s Plus, the original iPad Pro, the iPad mini 4, and a new aluminum Lightning dock for charging iOS devices. All of these products shared the space gray 2 finish. 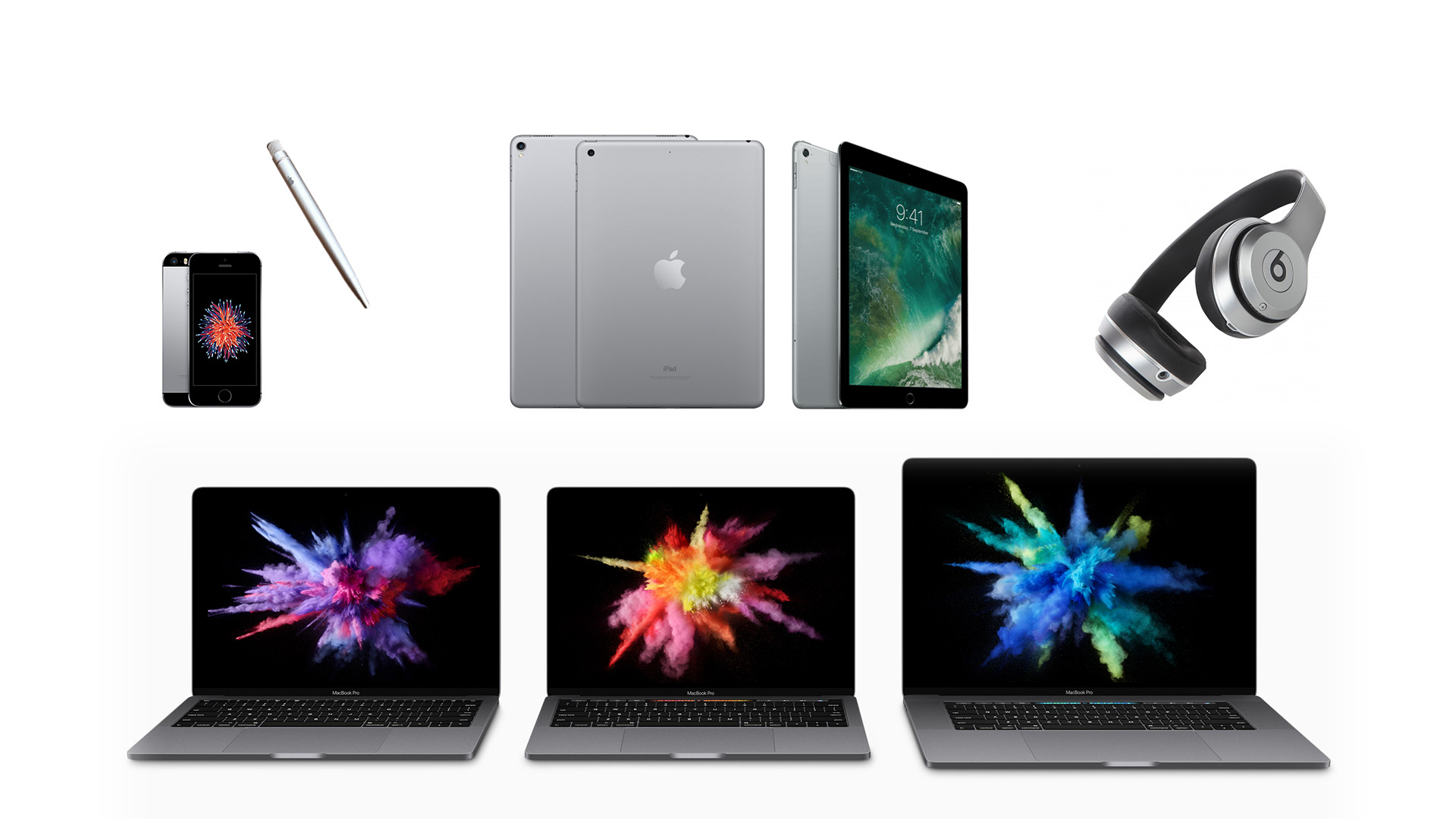 Around the same time, Apple reopened their company store at 1 Infinite Loop in Cupertino after significant renovations. A streamlined selection of merchandise exclusive to the campus location was offered, including color matched Apple-branded pens in the same lighter space gray.

For 2016, both the iPhone SE and 9.7-inch iPad Pro were released in space gray 2. While the SE’s design language was mostly shared with that of the iPhone 5s, it was the first time the lighter space gray finish was produced on a 4-inch iPhone. In October 2016, the MacBook Pro line joined the 12-inch MacBook and adopted space gray 2. All subsequent MacBooks have remained consistent in color.

There was also one model of Beats headphones produced in a shade of space gray close in appearance to space gray 2, this time under Apple’s guidance. The Beats Solo2 Wireless paired well alongside the iPhone 6 and 6s families, and were sold until the launch of the Beats Solo3 Wireless in 2016. 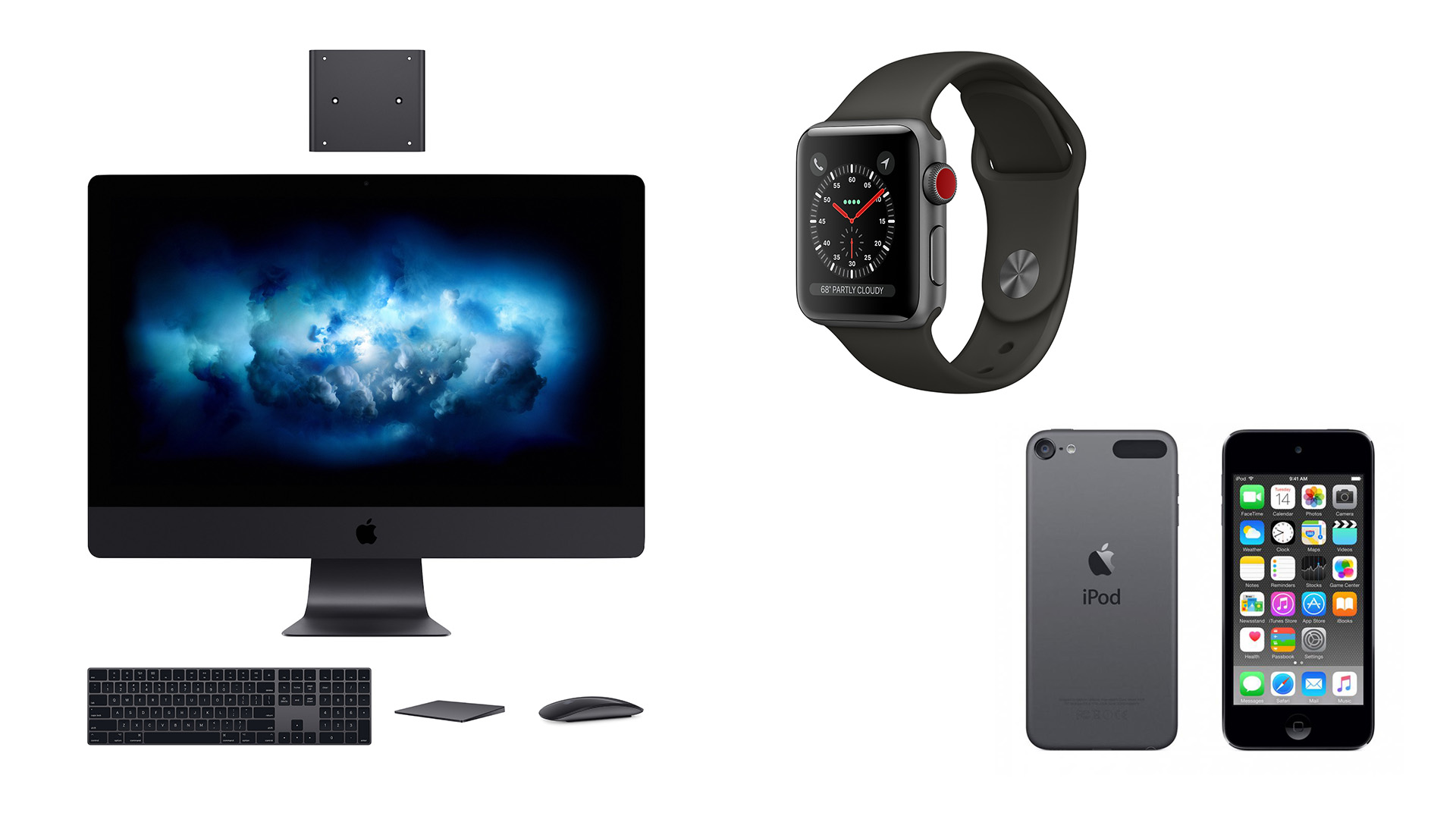 Apple’s September 2014 keynote curiously introduced two distinct shades of space gray marketed under the same name. The second, darker than the original space gray, appears similar to slate without a blue cast. We’ll call it space gray 3. The original Apple Watch Sport was the first device produced in the color, an outlier in Apple’s product line until July 2015, when the 6th-generation iPod touch was introduced. The existing iPod nano and shuffle were also refreshed at the same time, making them the only two devices ever produced in three different gray finishes. Reader Alex noted that Apple silently tweaked the finish on the original space gray Apple Watch several months into production after issues with the case’s Apple logo “disappearing.”

Every aluminum Apple Watch since the original – Series 1, 2, and 3 – have been produced in space gray 3. A video from DetroitBORG following Apple’s iPod refresh compares the colors:

As of publication, the newest family of products to ship with the space gray 3 finish is the iMac Pro and its accessories. After the computer was released in December 2017, there was instant demand for its matching Magic Mouse, Keyboard, and Trackpad, which originally were not sold separately. Prices for the accessories on eBay quickly soared, until Apple eventually began offering the products individually following their March education event.

Perhaps one reason Apple initially chose to restrict availability of the accessories was because they don’t technically match with other space gray Macs. Both the MacBook and MacBook Pro are significantly lighter when compared side-by-side. Apple also sells a special space gray 3 VESA Mount Adapter Kit for the iMac Pro. 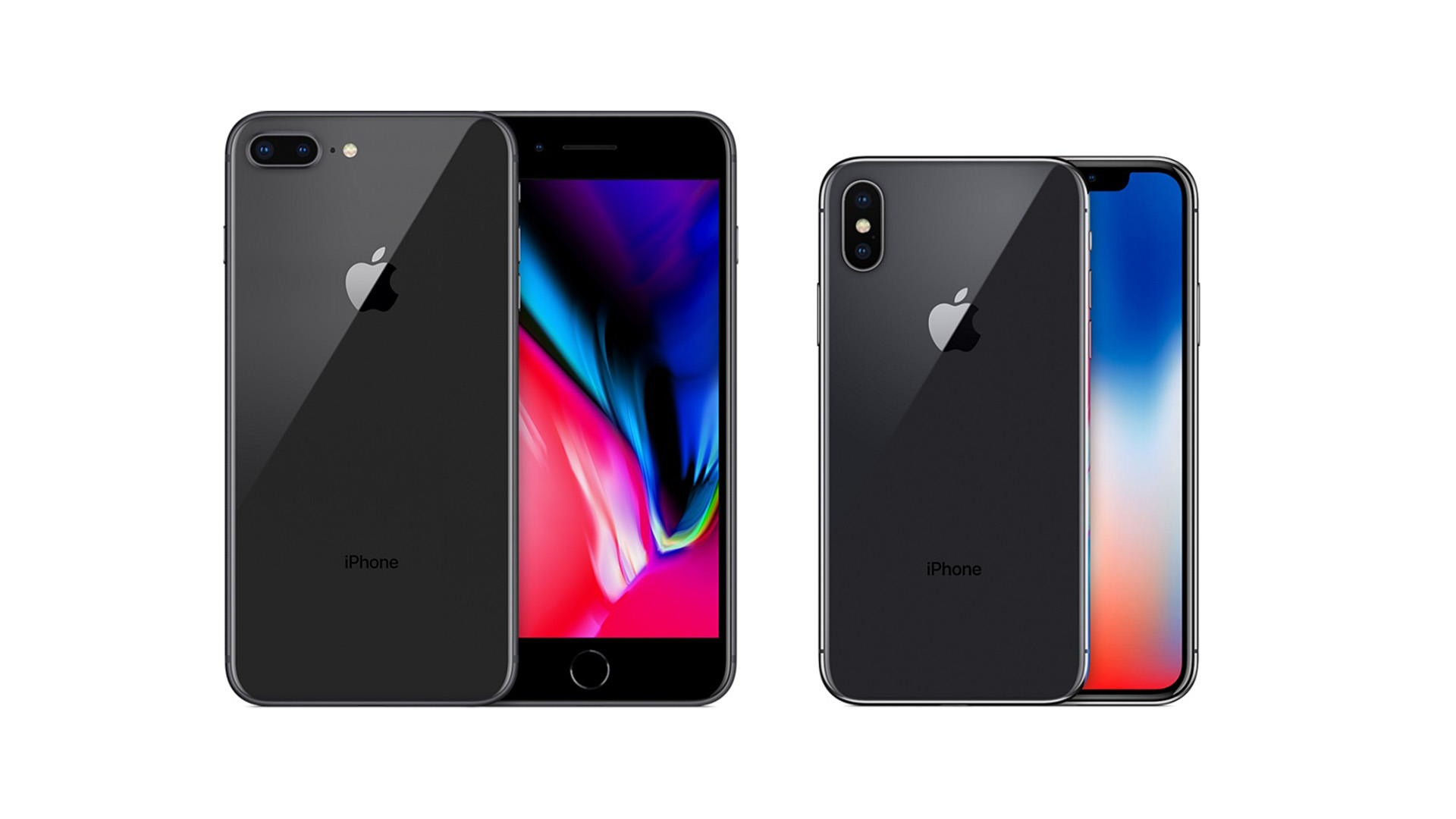 The constellation of space gray products in Apple’s observable universe expanded significantly last fall, when two variations of the space gray 3 finish were released. The iPhone 8 and 8 Plus aluminum frames both share the same shade of gray used on aluminum Apple Watches and the iMac Pro, but the backs of the devices introduced space gray to glass for the very first time. We’ll call this finish space gray 3A. The iPhone X took a similar approach with a unique look of its own. While the back glass color is consistent with the iPhone 8 and 8 Plus, the phone’s stainless steel frame uses a finish never seen before. The color is very similar to the space black Apple Watch, (we’ll get to that in a moment) but is lighter and less opaque. We’ll call this finish space gray 3B. 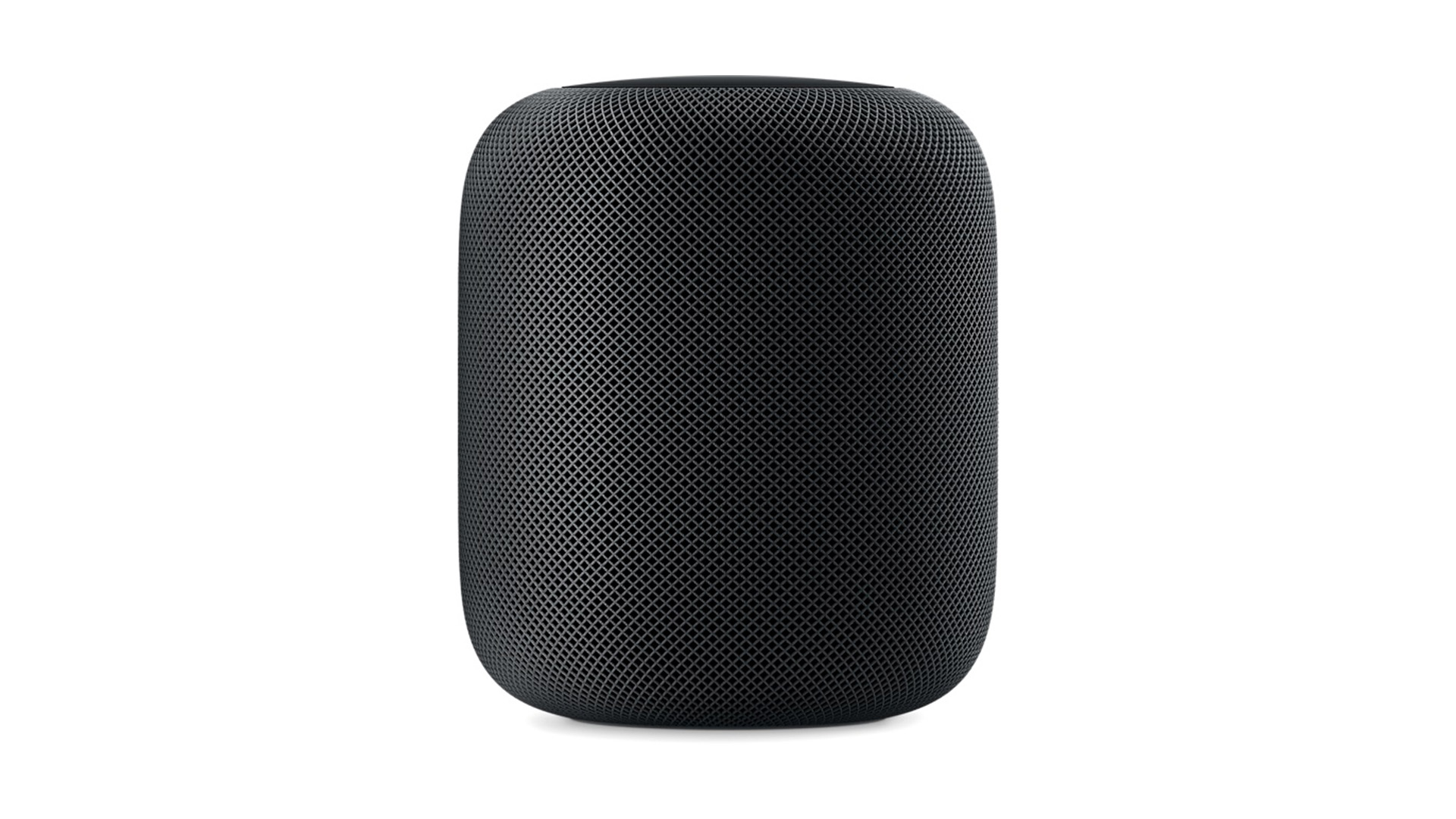 Space gray changed wavelengths in June 2017 when the HomePod was announced. The smart speaker is Apple’s first product to use a fabric interpretation of space gray. While HomePod’s announcement came prior to fall’s iPhone lineup, its color isn’t derivative of any products preceding it, so we’ll call it space gray 4.

Every Apple product produced in space gray as of April 2018, cataloged. (Click for full size image.) 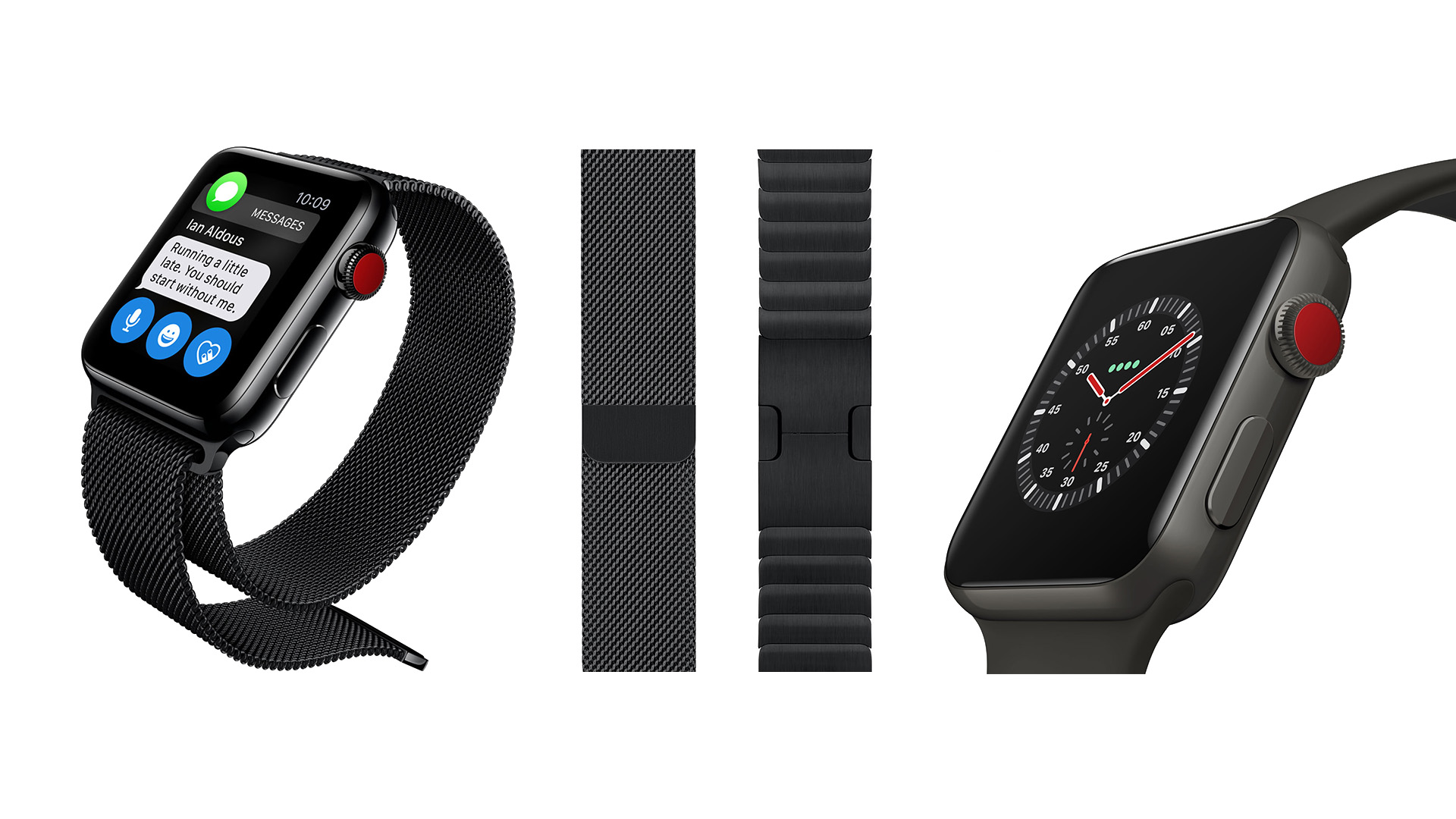 Alongside space gray, Apple has continuously produced products in several other darker satellite finishes. Since the original Apple Watch, space black has been a premium color offered on the stainless steel model. Silvery and reflective, the finish uses a diamond-like carbon layer for extra resistance against scratching and wear. Both the Milanese Loop and Link Bracelet are also offered in space black. New for the Apple Watch Edition in 2017 was a gray ceramic model, joining the original white casing. 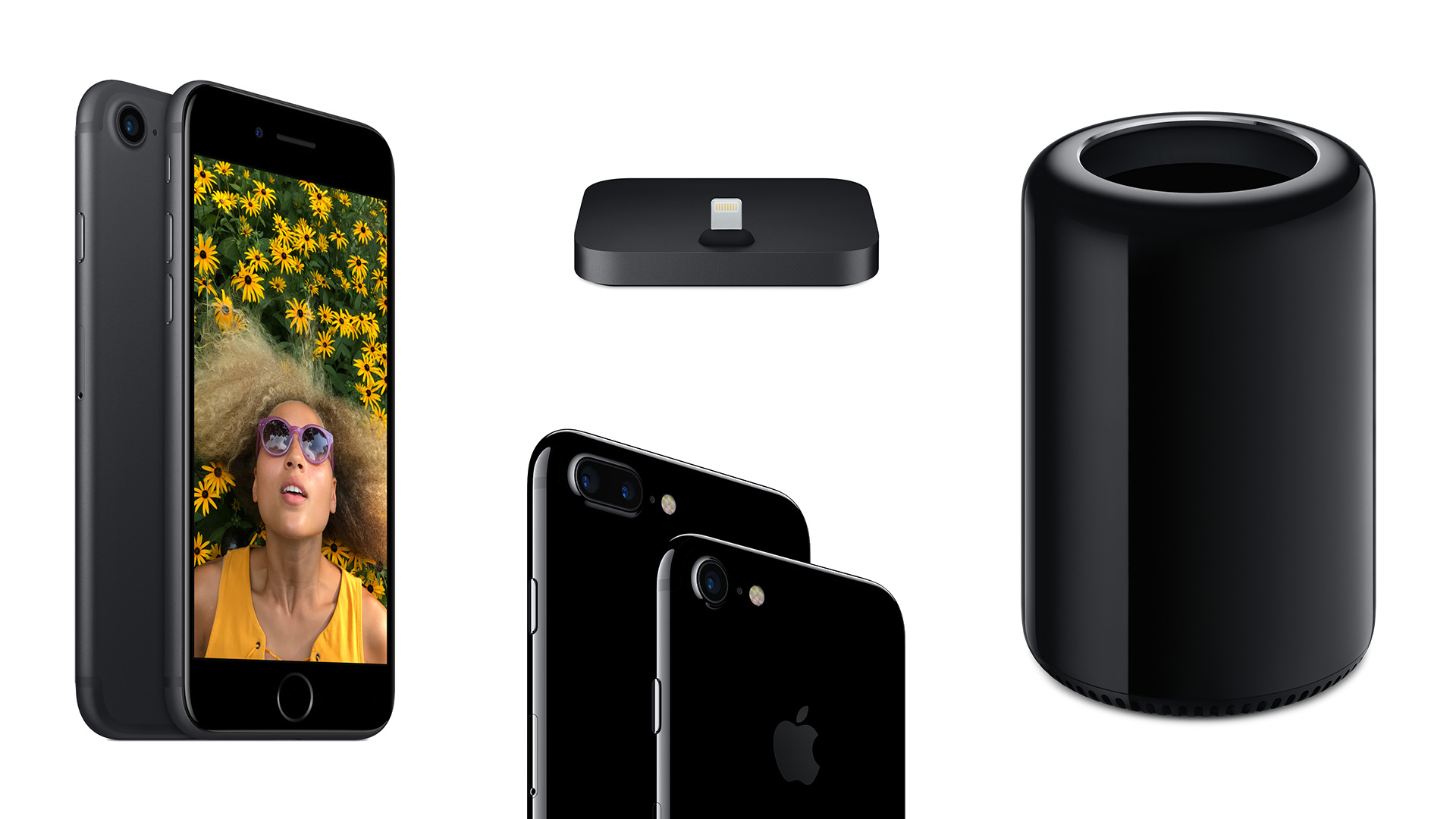 Most similar to space black was the reflective and mysterious polished surface of 2013’s Mac Pro. Apple’s marketing language and introduction presentation never gave an official name to this “pro black.”

The iPhone 7 line also experimented with two unique color options. Not offered in space gray at all, Apple opted for an entirely matte black anodized casing instead, reminiscent of older iPods. A matching black dock coincided.

Initially unique to the higher capacity model of the iPhone 7 and 7 Plus was jet black, a highly polished finish that Apple said was achieved through a nine-step process. As with the slate iPhone 5, customers noted that jet black iPhones quickly accumulated “micro abrasions” during normal use. Apple hasn’t used the jet black finish on any new products since the iPhone 7, and it’s not clear if micro abrasions were a contributing factor. 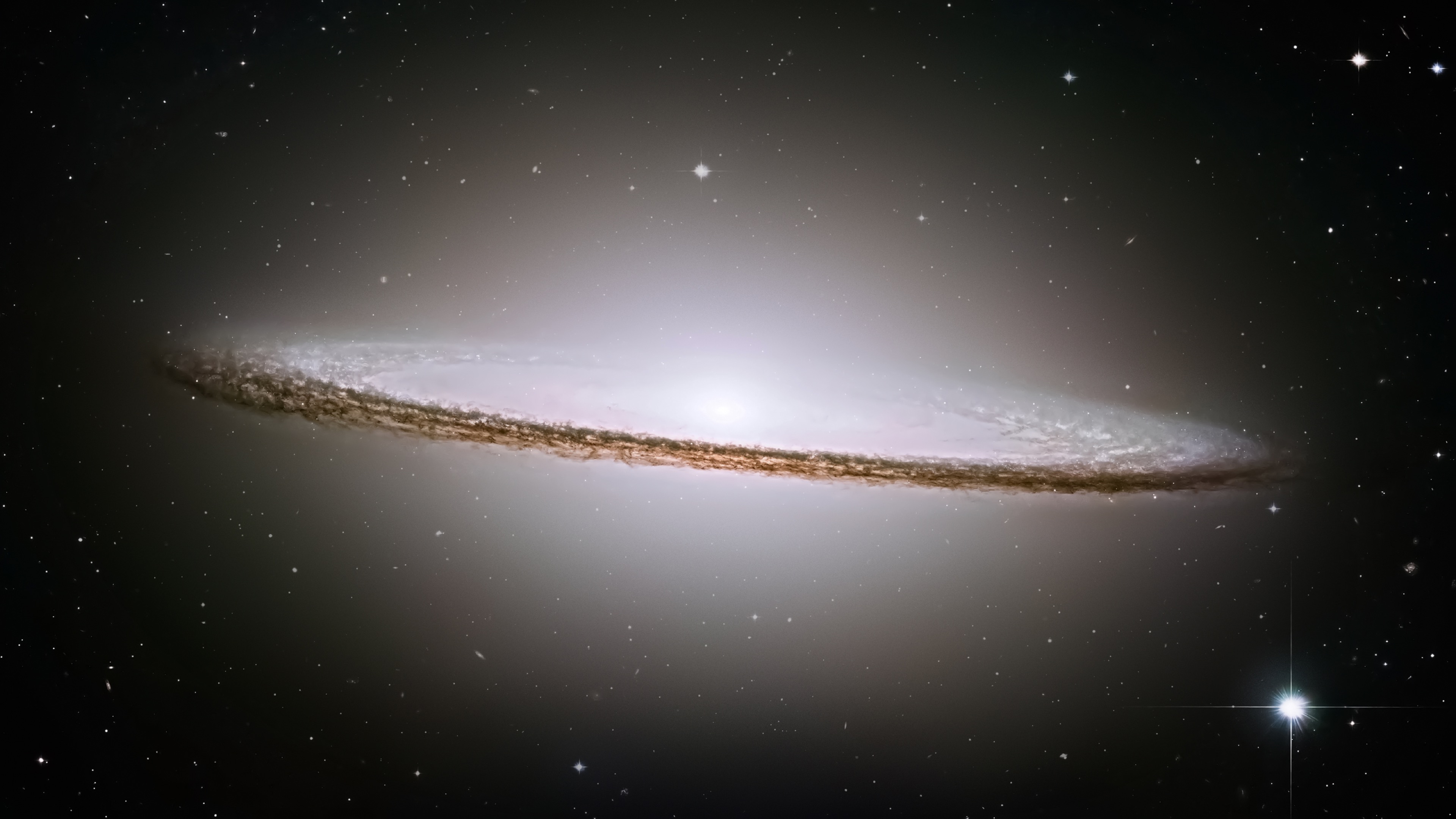 It’s important to keep in mind that space gray is a marketing title, not scientific terminology. Just like iSight, which was originally the name of an external video conferencing camera for Macs and later referenced the iPhone’s camera system, space gray can mean whatever Apple chooses. Customers ultimately choose their device colors from photos, by recommendations from friends, or after seeing the products in person – not because they’re loyal to the space gray name.

There’s a good chance we’ll see space gray continue to vary in the future, as changing styles, manufacturing processes, materials, and the preferences of Apple’s design team continue to evolve.

Special thanks to DetroitBORG for assistance comparing space gray products.