Before the spaceship: A look back at the previous campuses that Apple called home 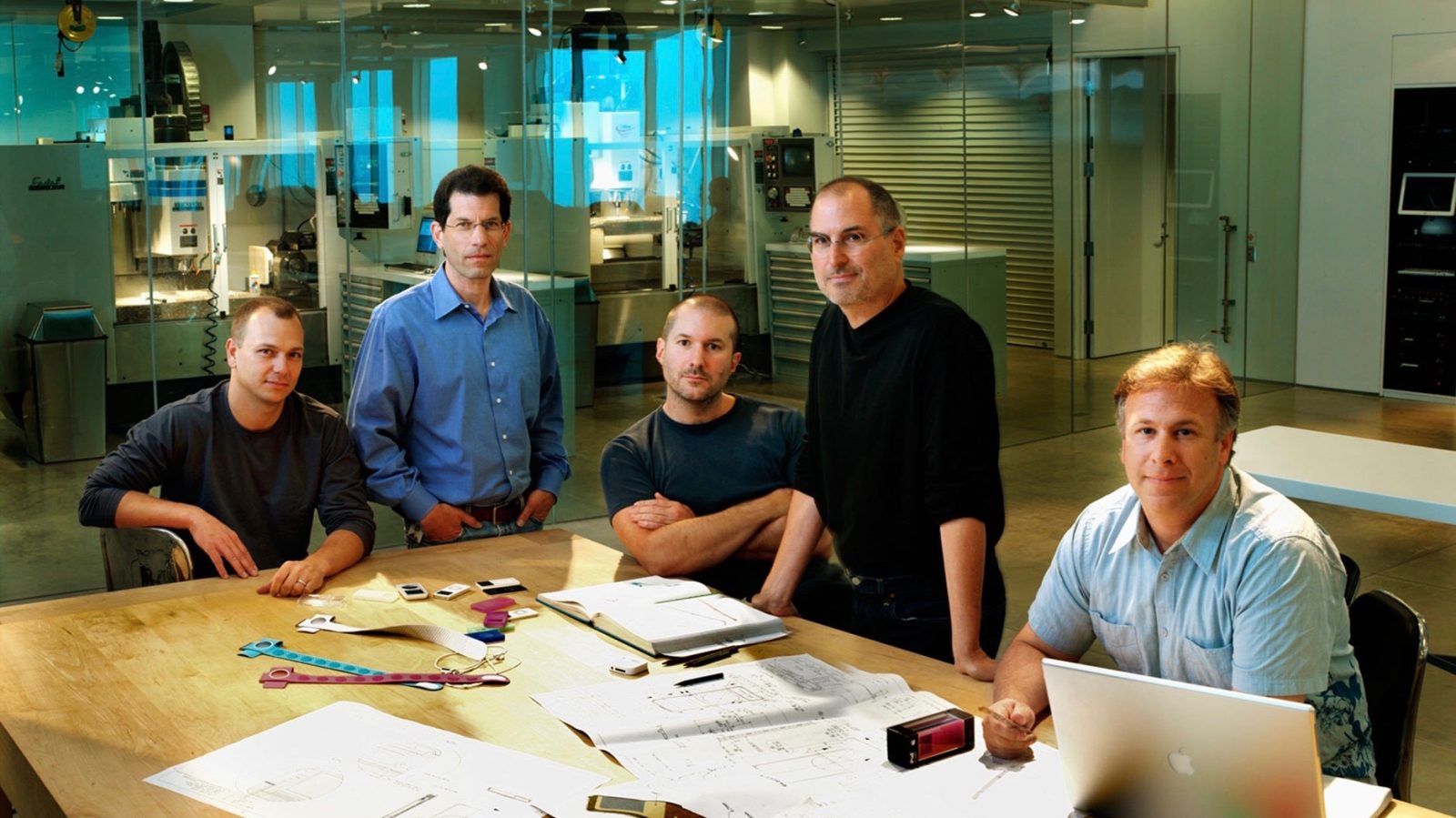 On November 17th, Apple will welcome the general public to its expansive new campus for the first time, marking an important milestone in the history of the company. This isn’t the first time Apple has moved their campus, though. Let’s take a look back at the corporate offices that preceded Apple Park.

This impressive display of design and engineering is surrounded by thousands of trees dotting the landscape, most of which were carefully transplanted to the location. Inside the carefully controlled environment of Apple Park, one could forget that Apple’s original headquarters is just a few miles down the road.

Apple’s first “campus” celebrated its grand opening with little more fanfare than the opening of a garage door. The story of Apple’s founding in his family’s garage in Los Altos is practically a legend at this point, portrayed in movies and a popular destination of Apple fans visiting the area. Today, the home is a protected historic site, but when the ranch-style house was built in 1952, it was just another one of the countless homes popping up among the orchards of the Santa Clara Valley. 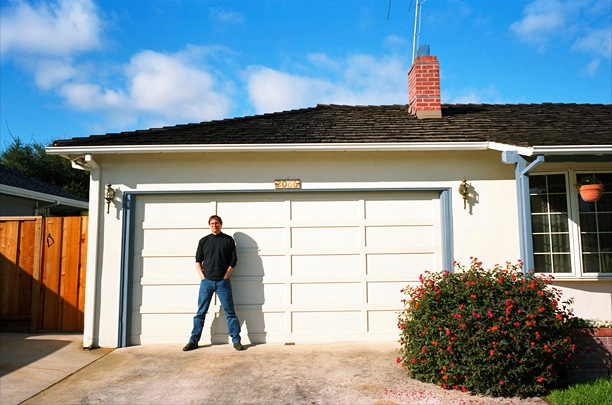 Steve Wozniak has called the legend of the garage somewhat of a myth, downplaying its importance in the formation of Apple. According to Woz, much of the work on the Apple I was done at his desk at Hewlett-Packard, and by Steve Jobs in his bedroom. Needless to say, Apple quickly outgrew the garage and moved on.

In 1977, as the small team at Apple was busy working on the Apple II, the company moved into their first real offices in Cupertino. Employees began to call the offices the “Good Earth” building, after a Good Earth restaurant located next door. Some early documentation shows Apple’s address listed as 770 Welch Road in Palo Alto, but the offices of the Good Earth building are of much more significance.

The facility was makeshift by today’s standards, but Apple continued to use the building well into the era of the Apple Lisa project, and again occupies the same space today. On January 3rd, 2017, 40 years to the day after Apple’s incorporation, Apple employee #8 Chris Espinosa posted a video showing the exterior and lobby of the offices.

While you can no longer eat at the Good Earth restaurant, Apple’s own Caffè Macs Alves is located just down the street from these offices today.

Apple found themselves in need of even more space in 1978. As the company grew, additional office spaces were purchased, rented, or built to fit the requirements of Apple’s rapid growth. Most of these spaces are still under Apple’s control today, as the company’s footprint in Cupertino grows ever larger. 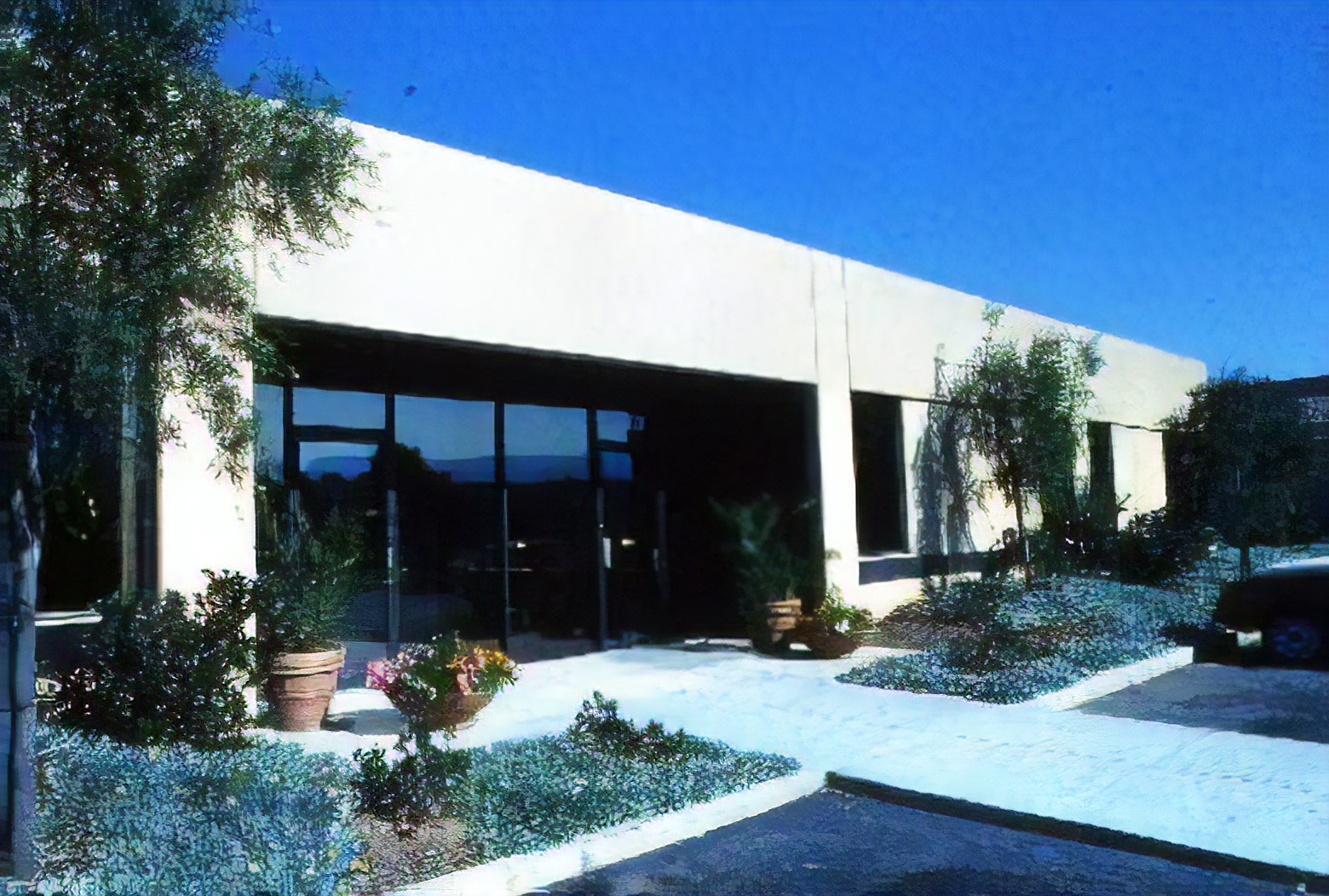 The third campus Apple called home was located on Bandley Drive, within walking distance of both the “Good Earth” building and today’s Infinite Loop. Apple began occupying the space on January 28, 1978. From the road, Bandley 1 looked like any other 1970s office complex in Silicon Valley. The design was influenced by Spanish architecture, with adobe walls and a faux terra cotta roof. A floorplan of the building from 1978 shows just how modest the interior was, too. 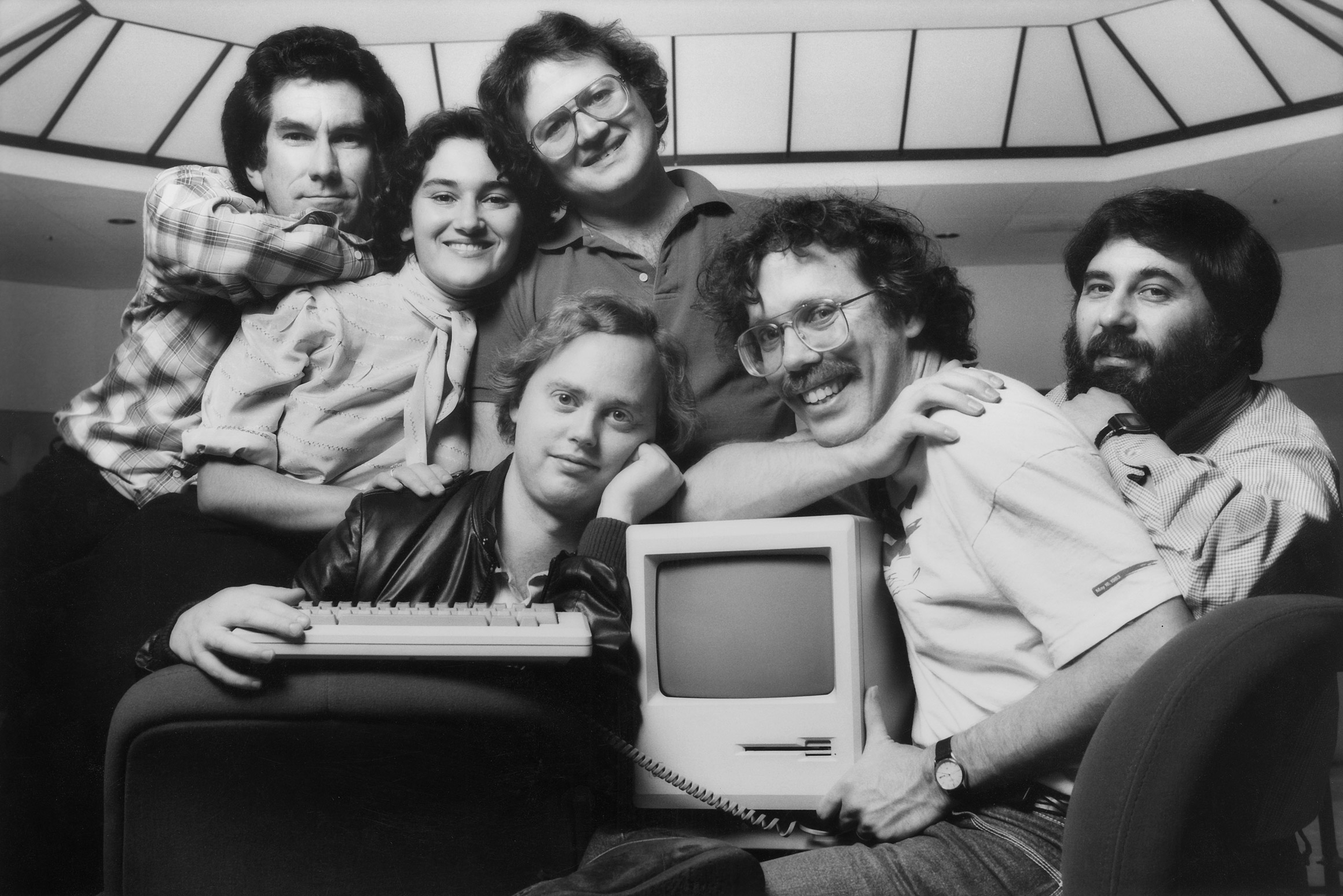 The original Macintosh team poses in the lobby of Bandley 3

It wasn’t until Bandley 3 opened next door in 1983 that the first signs of extravagance began to show. This wing of the campus held the original Macintosh team, and Steve Jobs spared no expense outfitting the office with every luxury. The lobby had a premium stereo system with a cutting-edge CD player. Skylights lit the ceiling above. Jobs eventually parked a BMW motorcycle and a Bösendorfer piano in the lobby, the latter of which, still resides at Apple’s campus today. 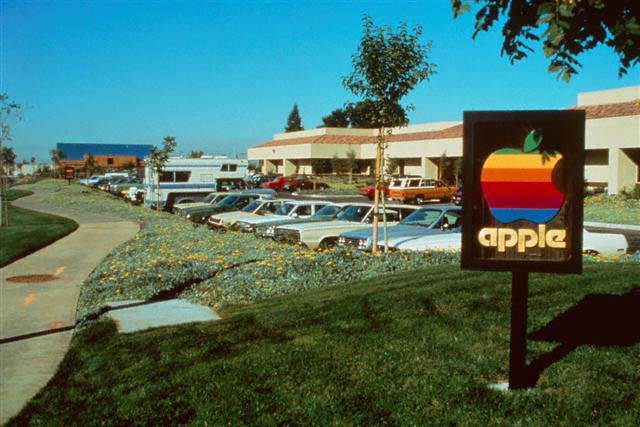 Bandley 3 (and several other buildings on and adjacent to Bandley Dr. are occupied by Apple to this day. Bandley 1, however, is now split into several professional office spaces and is known as The Bandley Center.

The move to Mariani One, as the building is called, would be Apple’s last major campus move until the construction of the Infinite Loop complex over a decade later. Mariani One was built in 1981, and occupied by the time Steve Jobs was photographed standing on top of the campus sign by Diana Walker in 1982. Like the majority of its other offices in Cupertino, Apple continues to occupy Mariani One today, interrupted only in 1996 when a lease was not renewed on over 100,000 sq ft. of the facility. During this time, Apple’s financials were suffering greatly and the company needed to reduce its footprint.

Just prior to the construction of Mariani One, Apple opened their first facility in Cork, Ireland. Steve Jobs was interviewed in 1980 by the TV station RTE about the company’s international expansion. Apple has been in the midst of an attempt to build a $1B data center in Ireland since 2015 and recently gained the approval to move ahead.

After being removed from Apple in 1985, Steve Jobs founded NeXT, Inc., which operated until being purchased by Apple in 1997. Although not officially Apple buildings, NeXT occupied two impressive campuses throughout its lifetime. The first was located in Palo Alto, and the second in Redwood City. Both featured designs by famous architect I.M. Pei, who also designed the glass and steel pyramids of The Louvre in France, near where Apple now operates a retail store.

The street address we recognize so well today didn’t even exist until 1992, when Apple began building its Infinite Loop complex as a R&D facility. When completed in 1993 by The Sobrato Organization, the 856,000 sq. ft. campus was spread across six connected buildings. Apple opened their company store at 1 Infinite Loop to the public for the first time on March 13, 1993. It wasn’t until 1997 and the return of Steve Jobs to Apple that Infinite Loop would become the company’s official headquarters.

Today, Infinite Loop looks largely the same from the outside with a few notable exceptions. The “Icon Garden” was a favorite campus feature of many employees, located to the right of building 1. Large pixel art statues of various Mac OS tools and icons stood here, including Clarus the DogCow.

In 2015, Apple closed The Company Store for renovations. Upon reopening, the entire wing was remodeled in harmony with Apple’s new store design philosophy, spearheaded by Angela Ahrendts. For the first time, the store began to sell Apple’s retail products in addition to campus-only exclusives.

While visitors to Infinite Loop are limited to entering only The Company Store (and Caffè Macs, with a pass), quite a few photos taken inside the campus have been posted online. Robin Weckesser, a former senior project manager for the campus, detailed the lessons he learned working on the offices in a photo-rich blog post.

Apple Park, known originally as Campus 2 and nicknamed “The Spaceship,” was first revealed in renderings by Steve Jobs on June 7, 2011. Jobs presented his proposal to the Cupertino City Council in what would be his last public appearance. 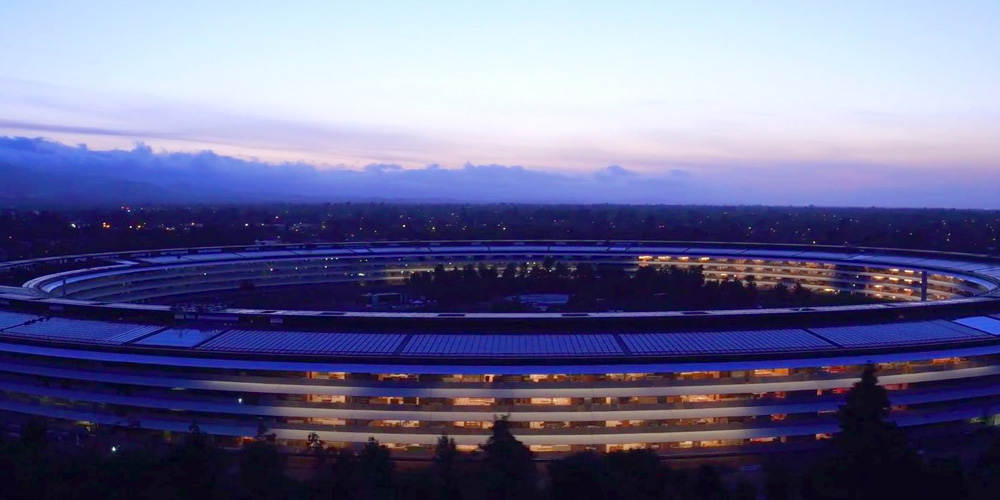 The new campus is located on a site previously owned by HP. Apple began demolition of HP’s buildings in early 2014 (with the exception of the Glendenning Barn), and construction began shortly after. Apple Park is perhaps one of the most thoroughly documented building projects ever, with dozens of interviews, photo galleries, and drone flyovers detailing the 175-acre facility.

9to5Mac has been following Apple Park’s construction since the very beginning, and we’ve rounded up all of our coverage in our Apple Park Guide. 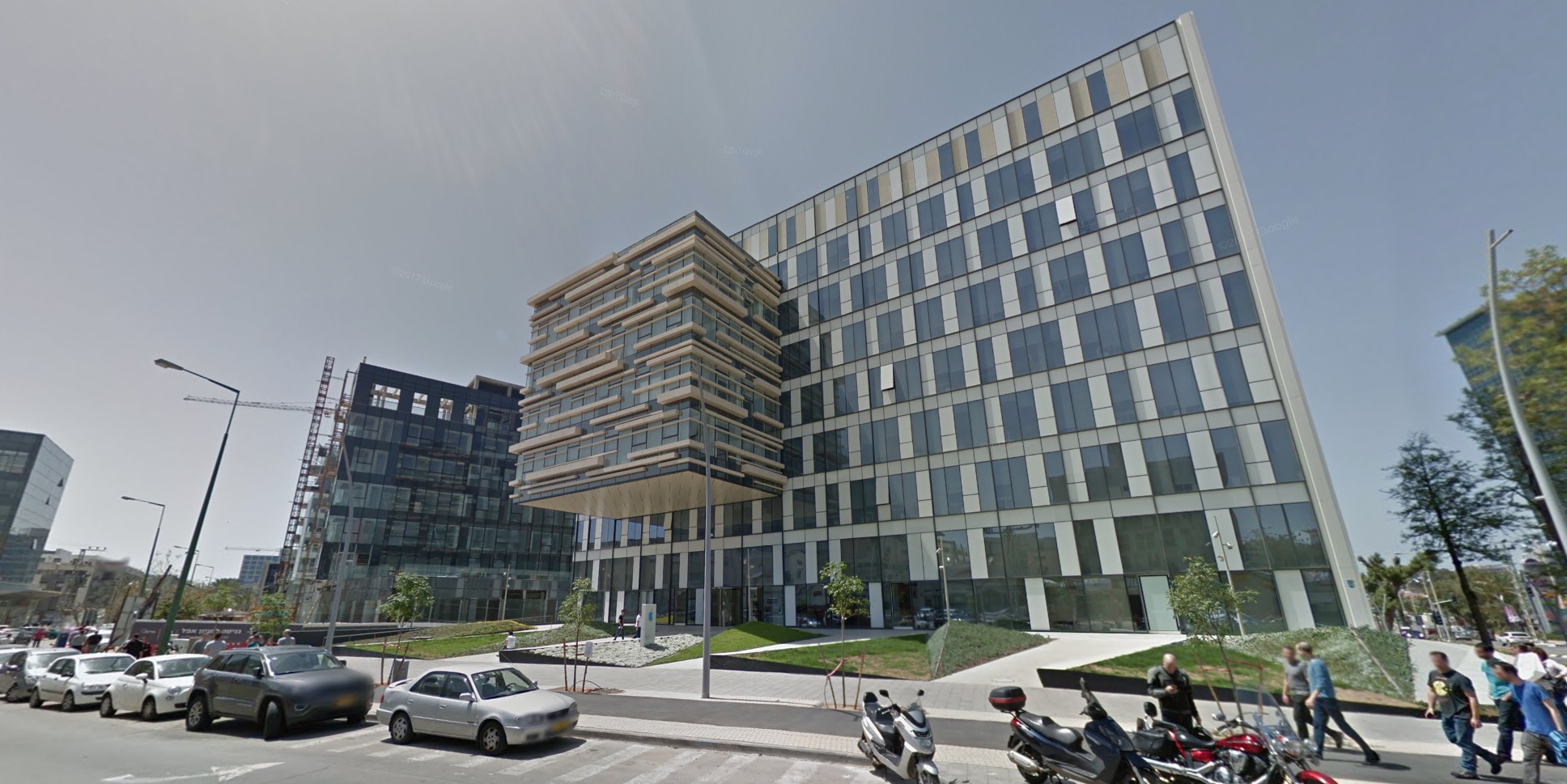 Throughout the construction process, Apple completed several smaller corporate projects both locally and across the world. One of note is the aforementioned Caffè Macs Alves, which was built in 2014 as a “taste of Campus 2.” The design of the restaurant closely mirrors the styling of Apple Park, but on a much smaller scale. Both were designed in collaboration with Apple by the architecture firm Foster+Partners. Apple also began an expansion of their facilities in Austin, Texas in 2012, with employees occupying the first phase of the project in early 2014. Another stunning Apple office opened in Herzliya, Israel in 2015.

In September 2017, Apple held their first event at Apple Park, inside Steve Jobs Theater. The campus visitor center, located just across the street, has a grand opening date of November 17th.

In many ways, Apple Park feels like first campus truly fit for the company. Apple prides themselves on the integration of hardware and software to create a seamless experience. For the first time, their own facilities will live up to this goal. Steve Jobs spent the final years of life working to make Apple Park a reality, and its completion marks the realization of a goal set in motion over 40 years ago with the opening of those tiny offices on Stevens Creek Boulevard.