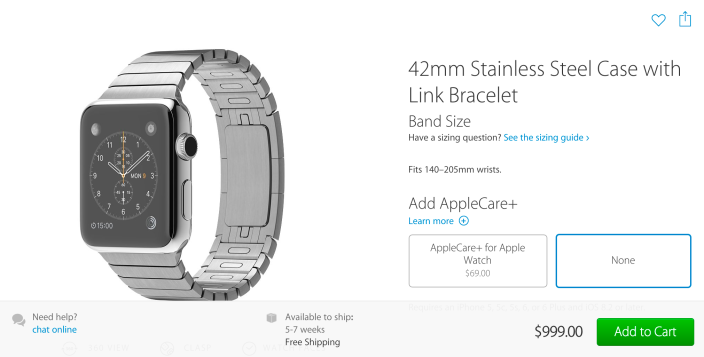 Apple has slightly improved shipping times for some Apple Watch models with almost all 42mm versions of its mid-range stainless steel Apple Watch now shipping as early as June, up from a previous shipping estimate of July. END_OF_DOCUMENT_TOKEN_TO_BE_REPLACED

After becoming a Dame of the British Empire in a ‘low key’ ceremony earlier this month, rumor had it that Apple’s new retail chief Angela Ahrendts would be leaving her CEO position at Burberry this month. Apple has never confirmed as much apart from saying Ahrendts would start in the spring back in its original announcement, but today reports claim Ahrendts might stick around at Burberry a little longer. The Guardian reports that while Ahrendts is free to leave after serving her 6 months notice and helping transition in a new CEO, she could earn as much as an £8m or $13.5m bonus if she stays at Burberry through June: END_OF_DOCUMENT_TOKEN_TO_BE_REPLACED Some cautioned then that the score, based on a 32-bit build of Geekbench running on an early pre-release version of the CPU with a beta version of Mavericks, might not tell the whole story, and new tests by Tom’s Hardware on V2 of the chip appear to confirm this …  END_OF_DOCUMENT_TOKEN_TO_BE_REPLACED

Piper Jaffray Apple analyst Gene Munster is out today with an updated outlook for the company, warning that Apple will not have any major product announcements until June and likely miss its June guidance with lower-than-expected iPhone and Mac sales.

In other words, the Retina iPad mini he predicted would launch in March—not happening. Instead, Munster said Apple could announce an incremental upgrade to iPad or iTunes in April and wouldn’t have a major product announcement until the iPhone 5S lands in late June. He also told Bloomberg this morning (video above) that a cheaper iPhone would be announced in September through a deal with China Mobile and ship in September or October.

Gene still prays for an Apple HDTV this year, telling Bloomberg this morning there is “no question whether it’s a set-top box versus a TV, it’s an actual TV.” He hopes Apple will announce its full-fledged television set by the end of the year.

Gene also thought Apple’s iWatch won’t make an appearance until 2014, while also noting that wearable technology has an opportunity to cannibalize the phone market within 5 to 10 years.

iPhoneclub.nl has partnered with concept artist Martin Hajek on this latest round of mock-ups that imagines the much-rumored, low-cost iPhone based on some of the recent rumors floating around. More realistic is the red version, as it includes a 4-inch display, polycarbonate backside, and some of the other rumored changes such as the positioning of ports and openings. We also get a larger 4.5-inch version in blue, which is something most analysts don’t expect to see on an iPhone until at least 2014.