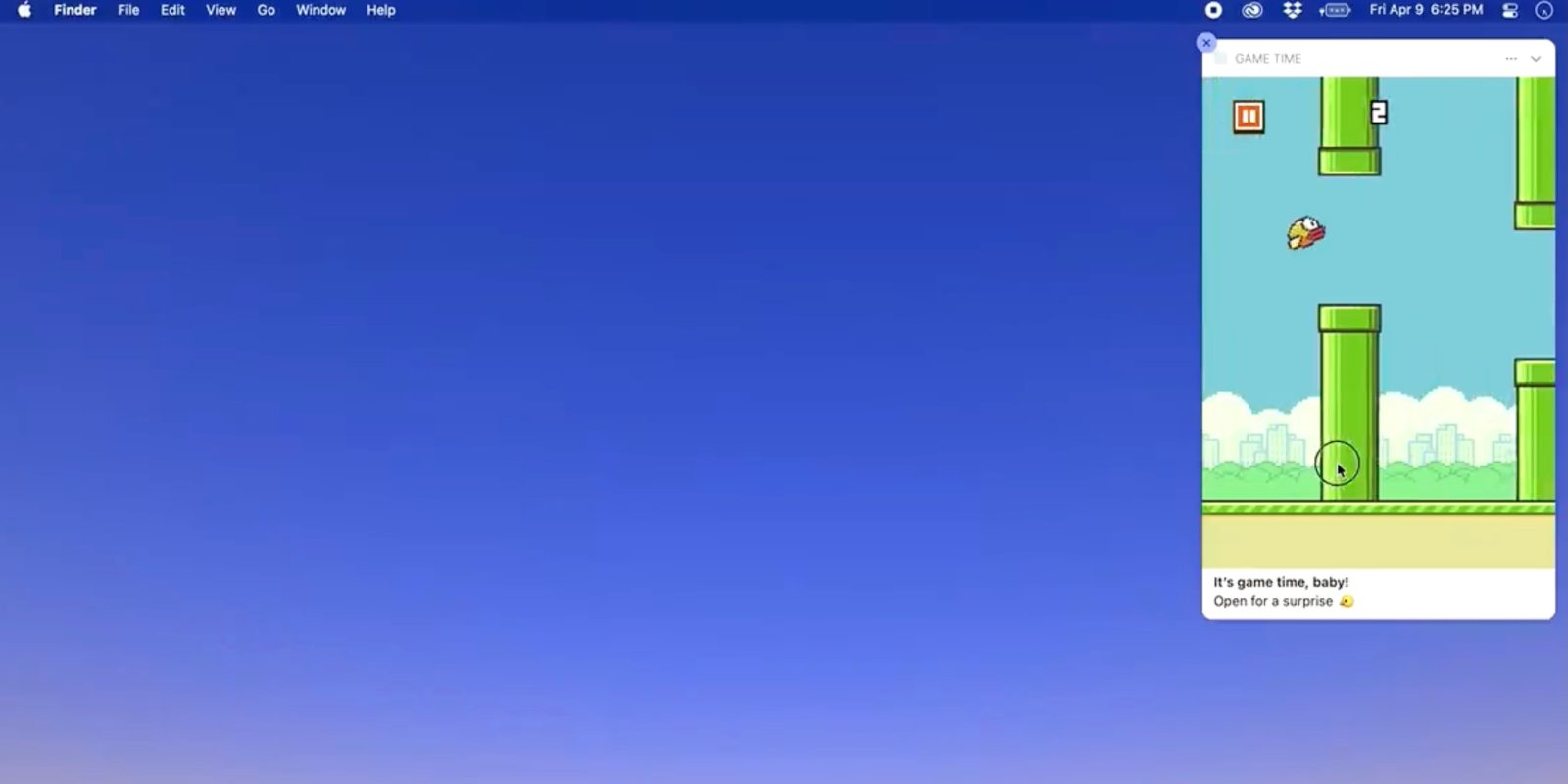 Flappy Bird, despite being removed from the App Store seven years ago, remains one of the most iconic iPhone games of all time. Now, developer Neil Sardesai has taken to Twitter to showcase how he brought a clone of the game directly to the macOS Big Sur Notification Center.

END_OF_DOCUMENT_TOKEN_TO_BE_REPLACED

If you’ve tried and thrown in the towel on Swing Copters, the follow up game from Flappy Bird creator Dong Nguyen, you may want to give besting your high score another try this morning.

An updated version of the game was released today, tweaking the gameplay and bringing it closer to the difficult-but-not-quite-as-impossible levels of its popular predecessor Flappy Bird.

In case you hadn’t heard, the creator of the infamous Flappy Bird is back and making another attempt at stealing your attention when you just need a quick iPhone gaming fix. The game is called Swing Copters and, quite frankly, it looks like a vertical remake of its predecessor—which spawned dozens of clones without the help of this spin-off. While we won’t know for a while whether or not this game will live up to the success of Flappy Bird, it’s now rolling out on the App Store in many locales.

According to Touch Arcade, which had an early peak at the game (Nguyen seems to be marketing this game despite pulling Flappy Bird for getting too popular), Swing Copters is just as challenging (therefore probably as addictive) as you pilot a helicopter upward through gates with menacing, swinging hammers that crash your flight on impact. The gaming site also has footage of early gameplay of the Flappy Bird successor as you can see below:

The official successor to Flappy Bird is said to be ready to soar on Thursday, August 21st, and be free with a single 99¢ in-app purchase to remove advertisements. Will Dong Nguyen’s next game be yet another hit or is the Flappy Bird concept too played out?

Okay, it may just be Flappy Bird, the addictive game that once took over the news cycle for days and still threatens to return again some day, but the thing here is it was written in Apple’s new programming language for developers called Swift. What’s so special about that? Swift was only announced yesterday, less than 24 hours ago, so what this simple Flappy Bird clone really means is Swift is off to a good start given its only a few hours old. You can view the code for the Swift version of Flappy Bird by Nate Murray on Github, and read more about Apple’s new programming language Swift on iBooks.

Flappy Bird will return to App Store in August w/ multiplayer, won’t be as fun

After removing the hit iOS game Flappy Bird from the App Store back in February, the developer confirmed today that the game will make a return in August.

Developer Dong Nguygen confirmed the return date today to CNBC’s Kelly Evans and also claimed that the game would be less addictive, which was originally the main reason he cited for removing the app earlier this year. In addition, the game will also apparently include a multiplayer when making its return to the store.

At its most popular, the original Flappy Bird game was reportedly making as much as $50,000 a day revenue. It didn’t take long for other developers to make clones of the game in order to capitalize on the game’s popularity and many of them remain in the App Store’s top charts for gaming.

In an extensive interview with Rolling Stone, Flappy Bird creator Dong Nguyen shared that it’s possible he will make the incredibly challenging iOS game available for users again… but with a disclaimer.

As for the future of his flapper, he’s still turning down offers to purchase the game. Nguyen refuses to compromise his independence. But will Flappy Bird ever fly again? “I’m considering it,” Nguyen says. He’s not working on a new version, but if he ever releases one it will come with a “warning,” he says: “Please take a break.”

But is there room for Flappy Bird to return in an App Store saturated with disturbing Flappy Bird clones? Probably so. While it may be (mostly) out of the center of everyone’s attention in headlines and our conversations, I have a number of friends still challenging themselves to top their high score. (Maybe Nguyen was right.) Myself? I gave up before hitting double digits.

Shortly after it went viral (after several weeks mostly undiscovered), Flappy Bird’s developer promised to pulled the game from availability and has since kept that promise creating more demand for the game.

You can read the full interview at Rolling Stone.

Smart Lock ‘Trusted places’ missing for some, including Pixel on Android 13 QPR1

How to set custom ringtones on your Google Pixel

Update: Nintendo has sent an email to the WSJ denying that it has made any complaint about the app’s similarity to Super Mario Bros.

Apple’n’Apps,  a relatively unknown site without much of a track record, is suggesting that Flappy Bird may have been pulled by Apple after Nintendo complained about copyright infringement regarding the graphics used in the game. Those pipes do look “Super Mario-esque”. The developer Dong Nguyen had claimed he was withdrawing it voluntarily, and that there were no legal issues. But there’s some gray area there we suppose.

A person familiar with the App Store review process tells Apple’N’Apps that Flappy Bird wasn’t removed voluntarily by Mr. Nguyen, as he claims. It turns out that Nintendo got in touch with Apple regarding the art assets in Flappy Bird claiming that they’re in direct violation of their copyrights. Apple contacted Mr. Nguyen regarding the copyright claim, and that’s why we saw the new updated version with graphic changes to the pipes [as well as fewer ads]. Nintendo already decided that they had seen enough, and Apple is the one who pushed Mr. Nguyen to remove Flappy Bird (with 24 hour notice).

We’ve asked Apple for a comment, and will update if we receive a response, though the version arguably makes more sense than a developer voluntarily forsaking around $50,000 a day in revenue due to the attention the game was receiving. Dong Nguyen’s two other games remain on the App Store, currently ranking #4 and #18.

Apple is know to err on the side of caution where copyright complaints are concerned.

The app has also been pulled from Google Play, which tells us nothing either way: if the claim is true then Nintendo would have approached Google also, but equally the developer would have voluntarily removed from both stores.
00

After reaching the top of App Store charts, the hit iOS game Flappy Bird will be removed from the App Store. According to tweets from the developer Dong Nguyen, it sounds like the game will be removed from both the iOS and Android app stores in just 22 hours. In the tweets, Nguyen says he “cannot take this anymore” and refers to the game’s success as ruining his “simple life.” He says the decision has nothing to do with legal issues. Nguyen also says he has no interest in selling the game to anyone and that he’ll continue to make games.

I can call 'Flappy Bird' is a success of mine. But it also ruins my simple life. So now I hate it.