It’s WWDC day and it’s expected to be a big one. Apple is set to announce new versions of its software platforms, iOS 11, macOS 10.13, tvOS 11 and watchOS 4.

We are also expecting new Mac hardware, a 10.5-inch iPad Pro and the unveiling of a ‘Siri Speaker’ home voice assistant. There will probably be other surprises as well. The keynote kicks off at 10 AM PT — 9to5Mac will be covering the whole thing live.

Follow along below for our live blog of the WWDC 2017 keynote, news links, and coverage of all the announcements …

We’ll be bringing full coverage of the lead up to the event, the main show and everything that happens after (like hands-on with the software betas). Here’s all the news from WWDC 2017:

– Michelle Obama will join WWDC for a fireside chat on Tuesday.

– Press can get hands-on with the new iPads after the keynote. Developers can also get a go at the new hardware later in the day.

– Tim Cook back to close out the WWDC keynote. Everything they have announced today is shipping this year.

– HomePod will act as a hub, like how the Apple TV works. This allows remote control all around the world.

– HomePod can control HomeKit devices, alarms, timers and much more.

– When you ask a Siri question, the top of the device lights up to display a waveform. Apple says the speaker array can pick up what you are saying even when you are across the room.

– You can setup 2 in one room and they will work together.

– It detects the space of the room that is in to make a large spacious sound. Schiller simulating the experience for the keynote attendees.

– Apple’s speaker will be very loud, free from distortion. Spatial awareness, Musicologist, and more. The new speaker is coming later this year.

– Apple looking to do the best of speakers and smart speakers like Amazon Echo. ‘Breakthrough home speaker’ across many years.

– iOS 11 is available to developers today; public beta later this month. Launching for real to everyone in the fall. 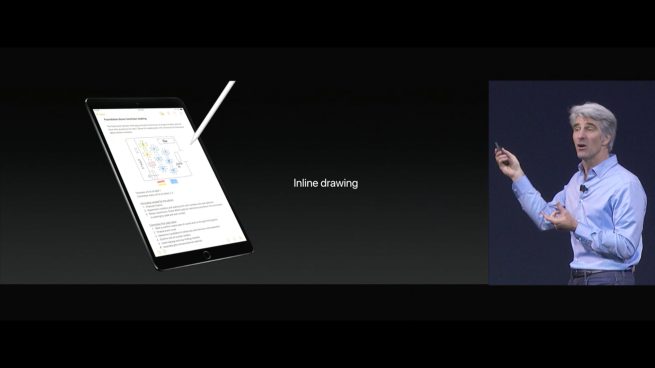 – When you take a screenshot, you can annotate it before sharing straight to Twitter or any other location in the Share Sheet.

– Toby Patterson is up to demo the new Apple Pencil features.

– Inline drawing for Notes. You can write straight over what you typed.

– iOS 11 lets you markup PDFs and screenshots using your finger or Apple Pencil. 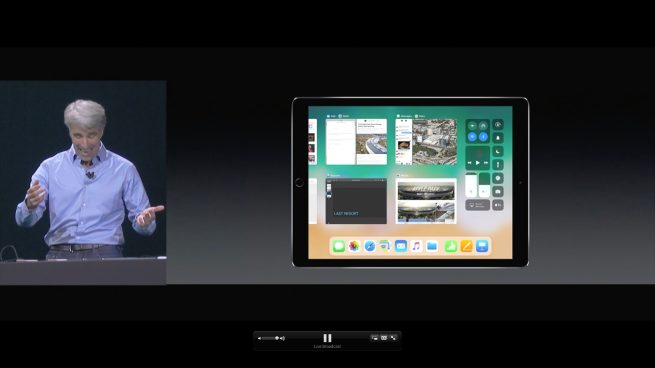 – You can tap and hold on apps in the Dock to find recent documents to drop straight into the main application.

– Files has a Recents view, a grid view and a list view. You can drag and drop files together. Files supports tagging as well as subfolders.

– Attachments from Mail can be dragged straight into the new Files app.

– Drag and Drop works as you expect. Pick up text and images from one side and let it go on the other. You can even drag across Spaces.

– Activate App Switcher by swiping up from the bottom of the screen. Spaces are preserved to keep two apps together whilst multitasking. 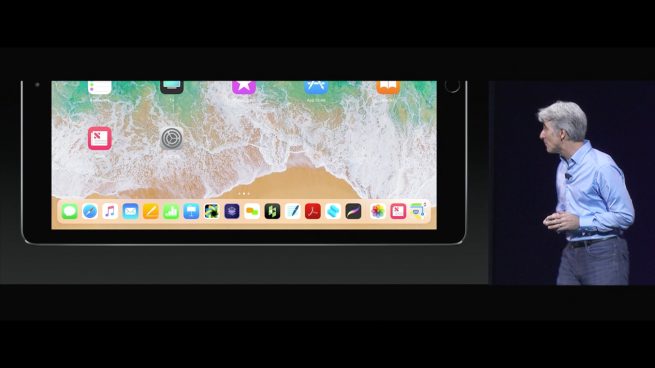 – Gestural keyboard, flick up to get alternative characters.

– App Switcher is redesigned, kinda like Spaces on macOS.

– Pull an app out of the dock and place it onto the screen to launch Slideover.

– Now iOS 11 features for iPad. Dock can be summoned from anywhere and contain many more apps.

– Demo of Affinity Photo app for iPad to highlight the 120hz display, performance and more. 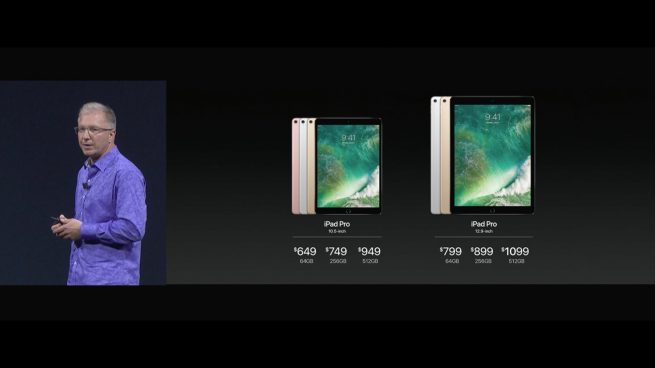 – LEGO bringing new app that expands Batman logo onto a table. Move in the real world to see different perspectives on the battle. Pokemon GO enhanced with ARKit allows the ball to bounce along the ground.

– ARKit to become the largest AR platform in the world, powered by hundreds of millions of iPhones and iPads. 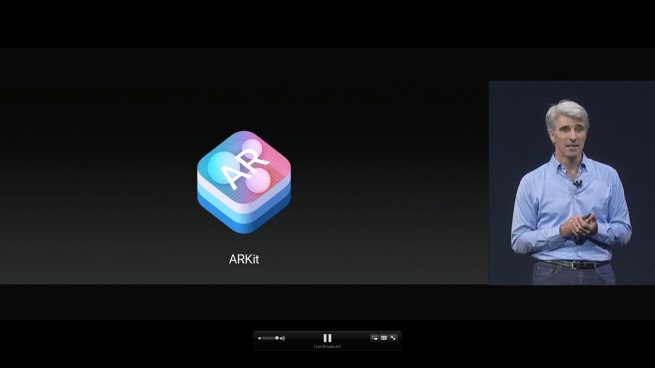 – Apple bringing ‘ARKit’ to iOS enabling developers to take advantage of augmented reality. This includes ways for apps to place virtual objects on a table in the real world. This includes interactive shadows. 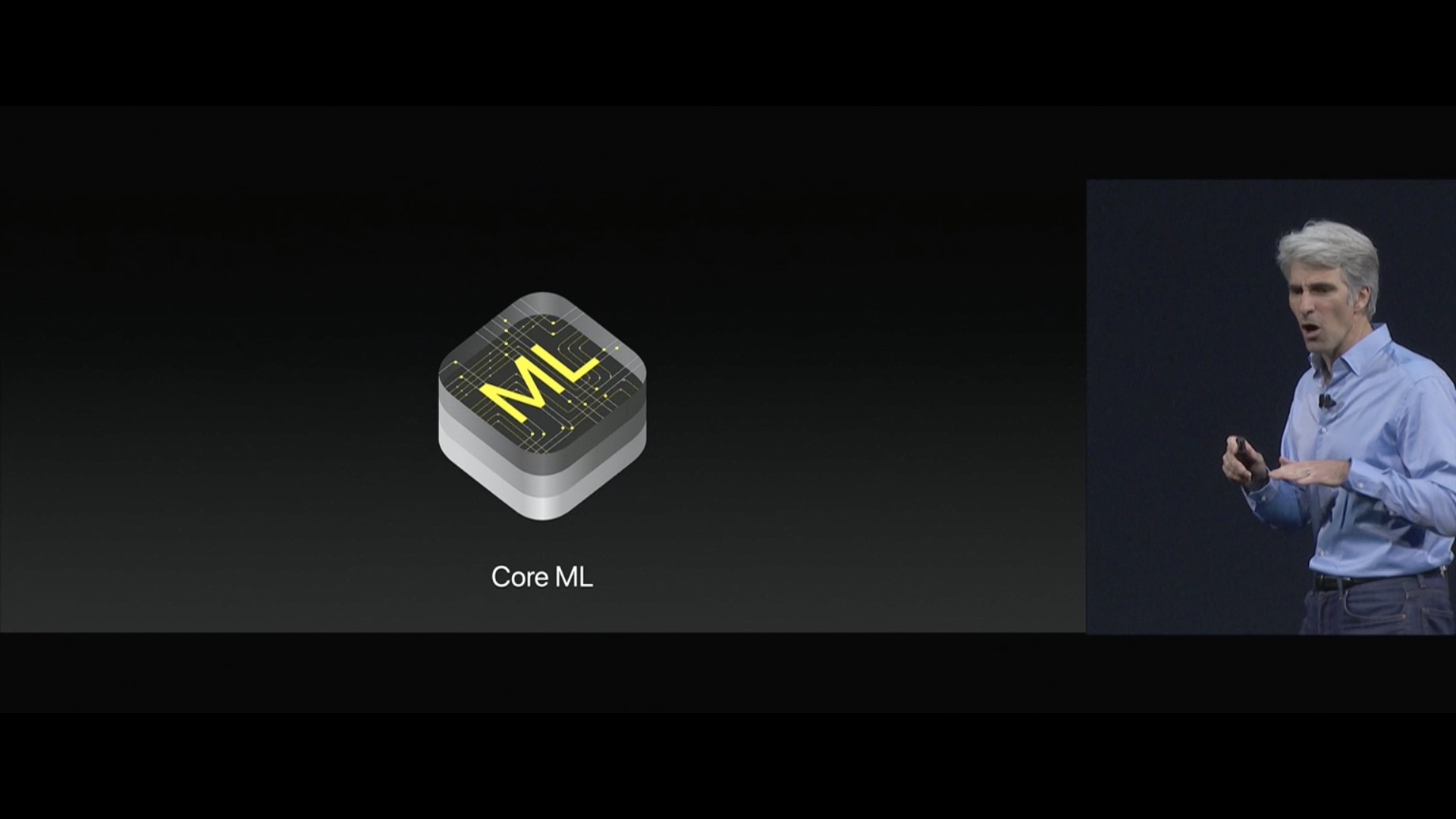 – Core Technologies update for iOS includes Metal 2, HEVC and machine learning. Machine learning is now easy for developers to incorporate into their apps. This includes a Vision API like face detection, Natural language API and more. This is wrapped into a framework called ‘Core ML’.

– Today view in the App Store is like Apple News for Apps. You can see stories about upcoming releases in Today. Apple has an editorial team making continuous content for apps. 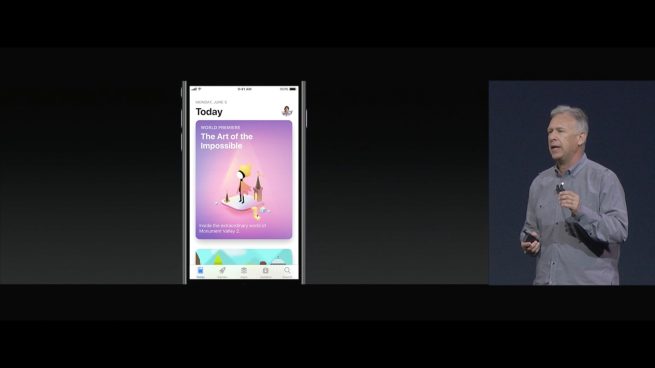 – Developers can now schedule calls, more TestFlight tesers and phased releases. This lets developers release app updates slowly to customer instead of all at once.

– Social features for Apple Music, including what Friends Are Listening To. MusicKit allows full access to the Apple Music service for developers. 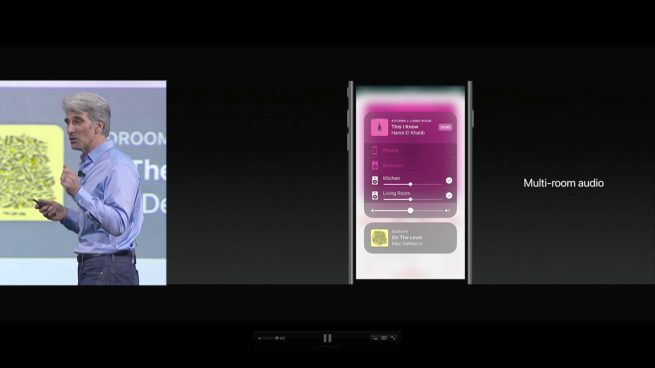 – Do Not Disturb Whilst Driving will reply to contacts automatically to let them know you can’t answer yet.

– Do Not Disturb whilst driving. This means notifications are hidden automatically when you are in your car, based on Bluetooth and WiFi sensors. 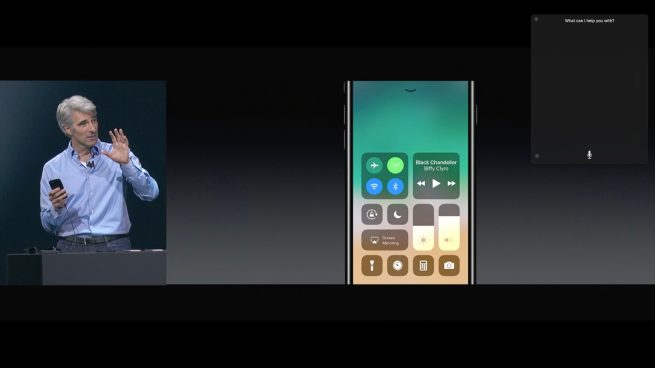 – Lock Screen and Notification Center are integrated together.

– Control Center redesign, back to one page. Everything is arranged into a grid although it’s not clear where the organisation is.

– Photos app has upgraded Memories to recognise even more types of events. You can do portrait and landscape memories. Live Photos are editable. 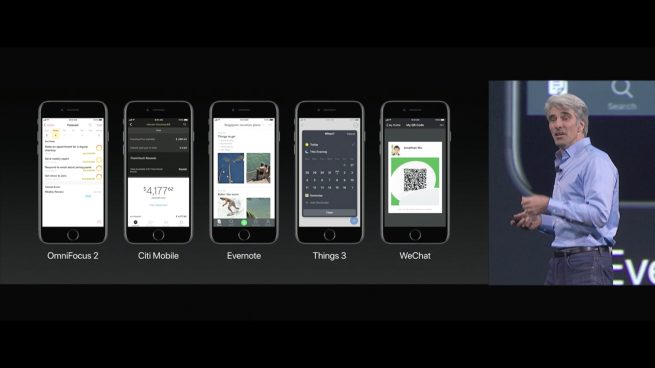 – Siri Intelligence has been revamped. It learns about topics of interest, calendar appointments and more.

– SiriKit can now do more than ever with task management, banking, QR codes and more.

– Updated with more natural Siri voice in both male and female. There’s a UI improvement with new rounded bubbles. Siri can now translate from English to Chinese, French, German, Italian and Spanish.

– Person-to-person Apple Pay coming with iOS 11. It works like an Apple Pay app. Apple Pay cash card can be transferred to your bank. Available on iOS and Apple Watch. 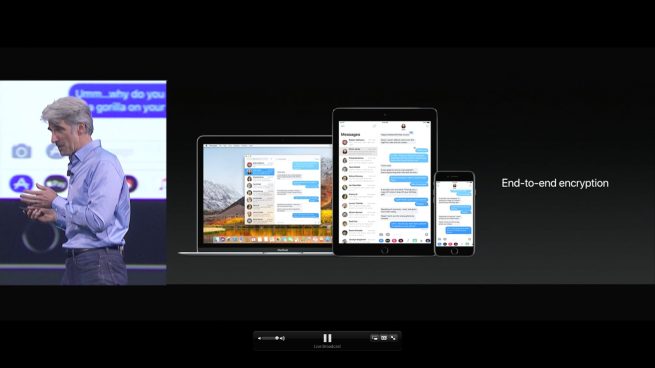 – ‘Messages in iCloud’ saves all conversations into the cloud so you can restore them when you log in. You can now delete a bubble and it vanishes everywhere.

– iMessage apps are now visible in a horizontal row that you can scroll through.

– Apple is turning it up to 11 with iOS 11. Craig Federighi is revealing it.

– iMac Pro can deliver up to 22 teraflops computation power, Radeon Vega graphics. You can configure it with up to 128 GB ECC RAM. 4 Thunderbolt 3 ports. Coming in December. 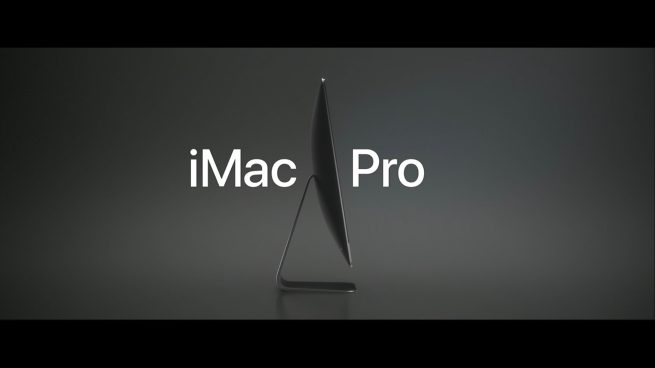 – MacBook and MacBook Pro are also getting a refresh with Kaby Lake processors. A 13-inch MacBook Pro configuration now available for $1299. The MacBook Air is getting a ‘megahertz’ bump. 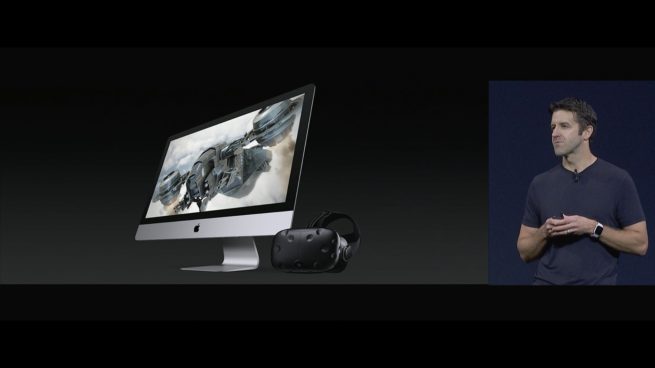 – All iMacs boosting graphics performance. Low end gets better integrated graphics, up to 80% faster. Retina 4K 21.5-inch iMac adds Radeon Pro 555 GPUs as the base, up to 3x faster than the previous generation. 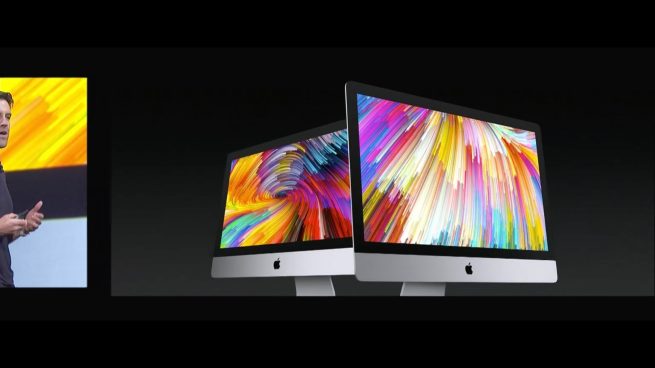 – Apple updates iMac with 43% brighter display, 500 nits brightness and 10-bit dithering. The whole iMac line is updating to Kaby Lake with HEVC decode. 27-inch iMac can now go up to 64 GB. They also have 2 Thunderbolt 3 ports.

– Apple is supporting external GPUs with High Sierra. They are launching a developer kit with an AMD Radeon GPU to let developers get ready for eGPUs. 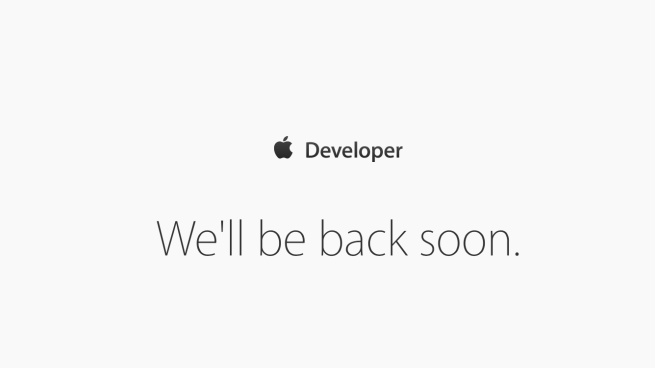 – ‘Metal 2’ is a 10x improvement over Metal 1 in graphics performance. Debugging options for developers. 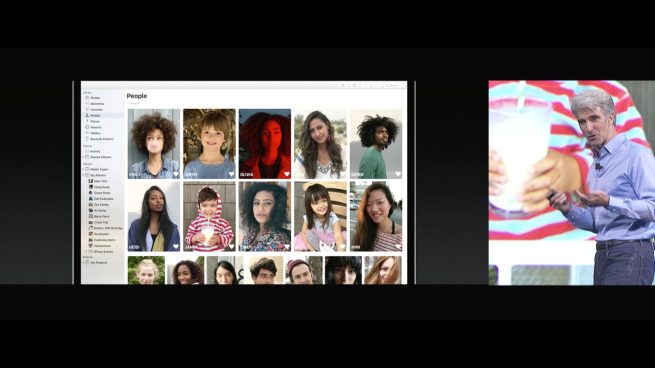 – macOS Photos adds a persistent sidebar and they have a new dropdown for filtering. They have added a lot more editing tools and added a better UI for advanced editing. Faces now sync across devices. New printing options.

– macOS’s new name is ‘High Sierra’. This update is about deep technologies and refinements.

– New presenter Vera Carr from the Apple Watch team. She is showing off the new Dock, which is kind of like the iOS 10 multitasking but vertically.

– Apple Watch Music has been revamped to support automatic syncing and you can flip through albums with the Digital Crown. You can sync more than one playlist finally!

– You can now connect gym equipment to the Apple Watch, allowing all the information to be more accurate and synced together. Compatible equipment will roll out from this fall. 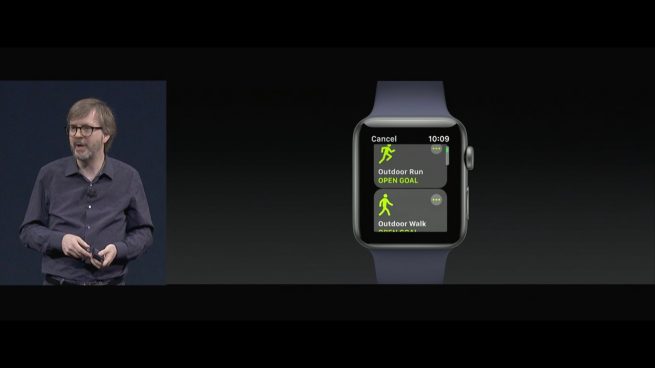 – Better achievement progress from the Activity app. New animation when the rings are completed. 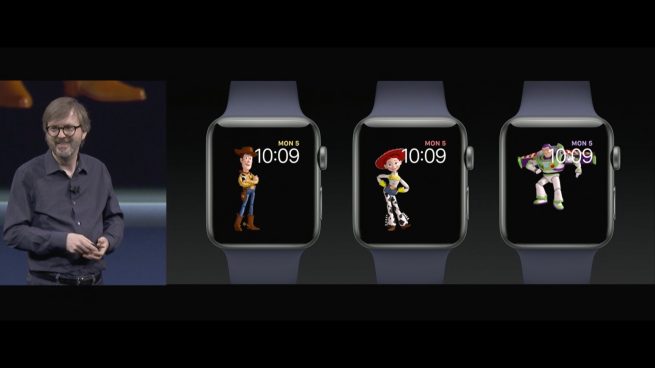 – Kaleidoscope face adds a ‘trippy’ effect to the watch face.

– watchOS 4 announced by Kevin Lynch. Siri clock face will give automatic suggestions on watchOS called ‘Up Next’. 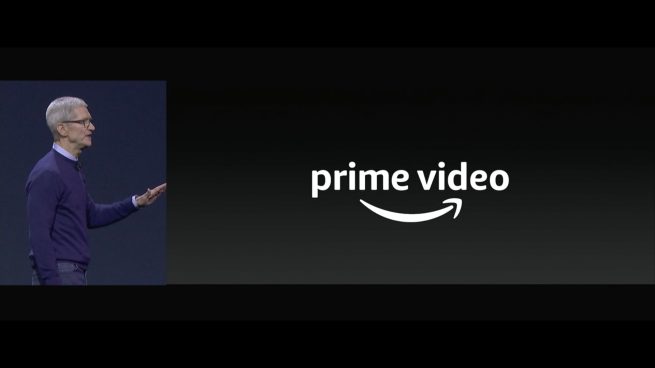 – Amazon Prime TV coming later this year to Apple TV and the TV app. No tvOS.

– Tim Cook says they have a lot to talk about, six flagship announcements. 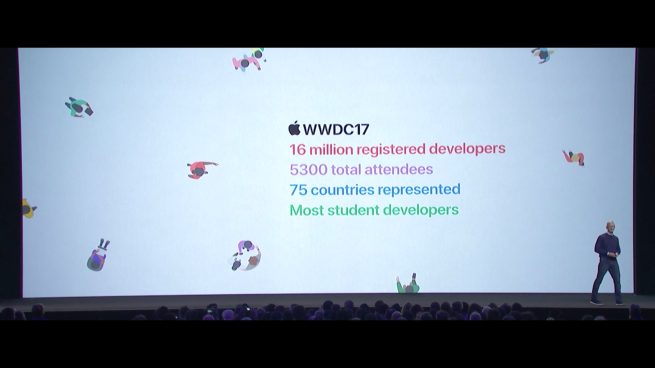 – Tim Cook on stage, fifteen years since they last held a developer conference.

– Apple showed who’s speaking on stage, Vera seems to be a new face.

– Here’s Jordan’s perspective from inside the McEnery convention center. 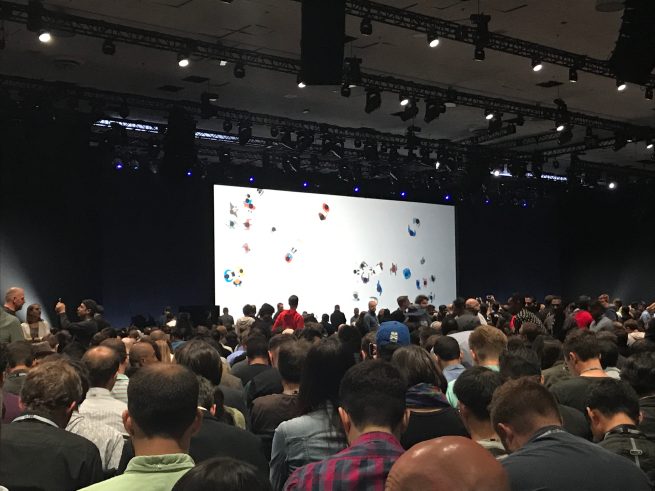 – Apple’s live stream is up. Ten minutes from showtime.

– Jony Ive is in the audience! New software design or just for new hardware?

– Developers rushing to their seats, many queueing since last night.

– Press hearing that it is going to be a long show, over 2 hours.

– We are going inside. 45 minutes until showtime!

– One hour away from the show!  The livestream usually goes about fifteen minutes before.

1 hour to go! We're at the front of line waiting to enter keynote #WWDC17 pic.twitter.com/ksbhfAZZbH

– If you want to install the betas after the event is over, remember to charge your Apple devices now; this includes accessories like Apple Pencil in case there’s new stuff for those too!

We're in! Stay tuned for live coverage from #WWDC17 pic.twitter.com/fiSKbPtlnp

– 9to5’s Seth Weintraub is talking about WWDC on Cheddar.

– Apple has special Snapchat filters for developers in attendance at the venue.

– Jordan is watching the event from inside the McEnery convention center. Here’s his badge:

Will be live tweeting ahead of stream @9to5mac pic.twitter.com/Cj72rSclIE

On our way in #WWDC2017 pic.twitter.com/SOnWcChVu8

– Tim says ‘there is a big week ahead’. Keynote line is already packed.

-Late-breaking leaks include new Files app, and references to drag and drop.

-We are live in the keynote line.