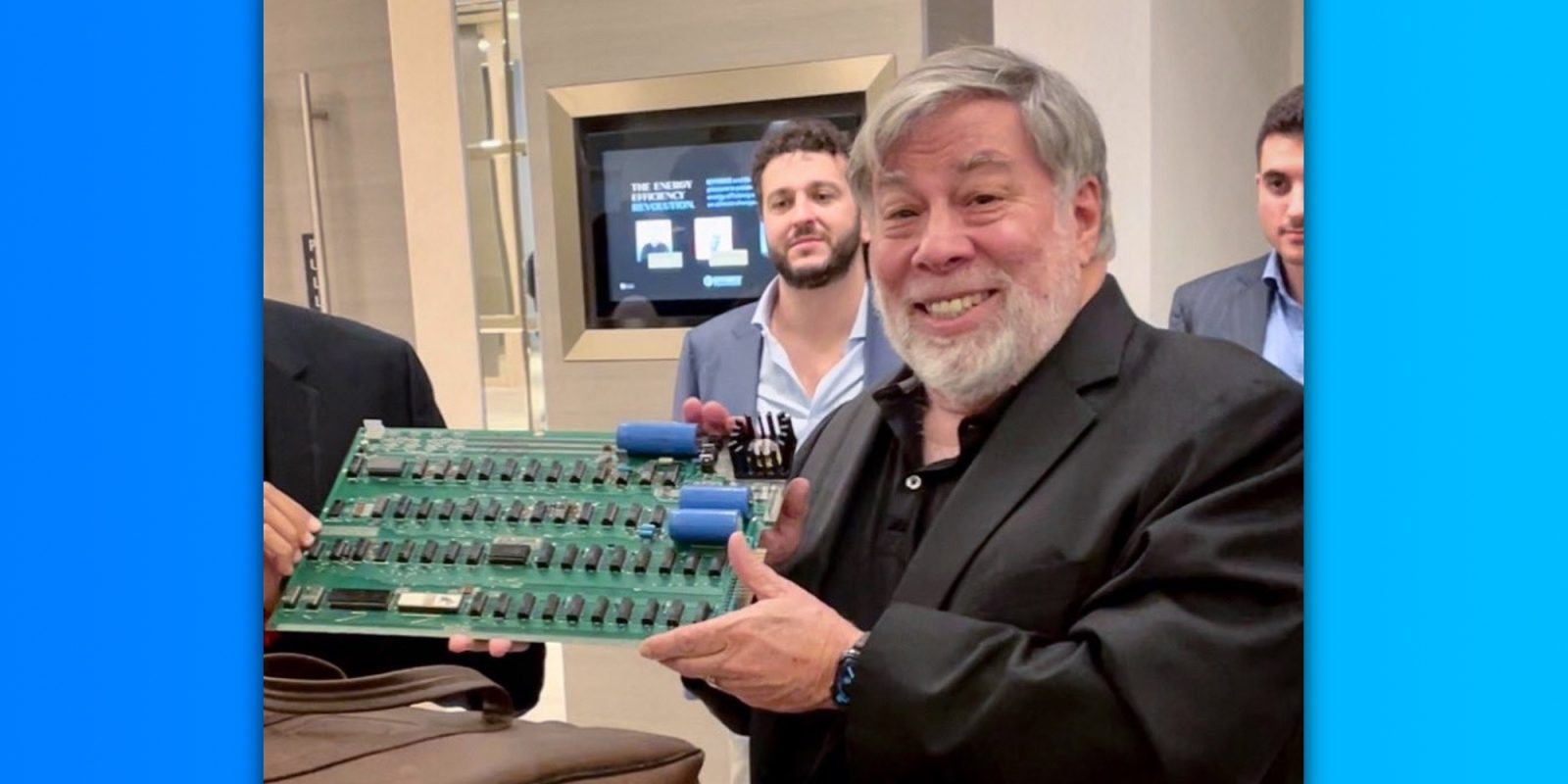 It’s not every day you can see a perfect-looking Apple Computer I motherboard. Combine it with Apple cofounder Steve Wozniak holding and signing his 1976 invention, and you get one of those rare Apple fanboy moments.

END_OF_DOCUMENT_TOKEN_TO_BE_REPLACED

An obsessive Apple fan has created what he describes as perfect reproductions of the original Apple I manuals. To do so, he says, he had to position individual letters by hand … 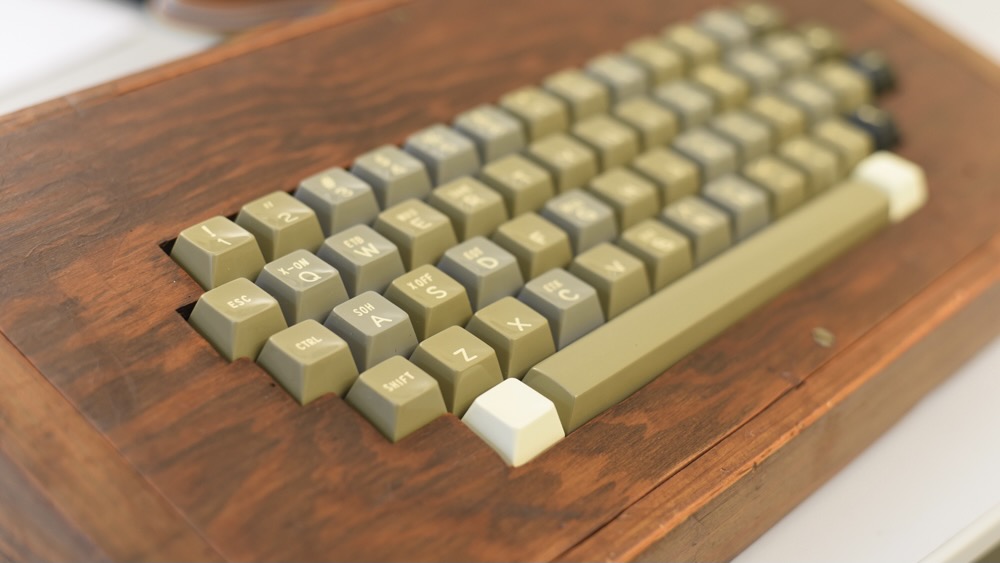 We usually see a few Apple-1 computers go up for auction each year, but the latest one looks to be rarer than most. In addition to being in “exceptional” and “fully functional” condition, this Apple-1 includes all the necessary accessories and comes in the original box signed by Apple co-founder Steve Wozniak.

END_OF_DOCUMENT_TOKEN_TO_BE_REPLACED 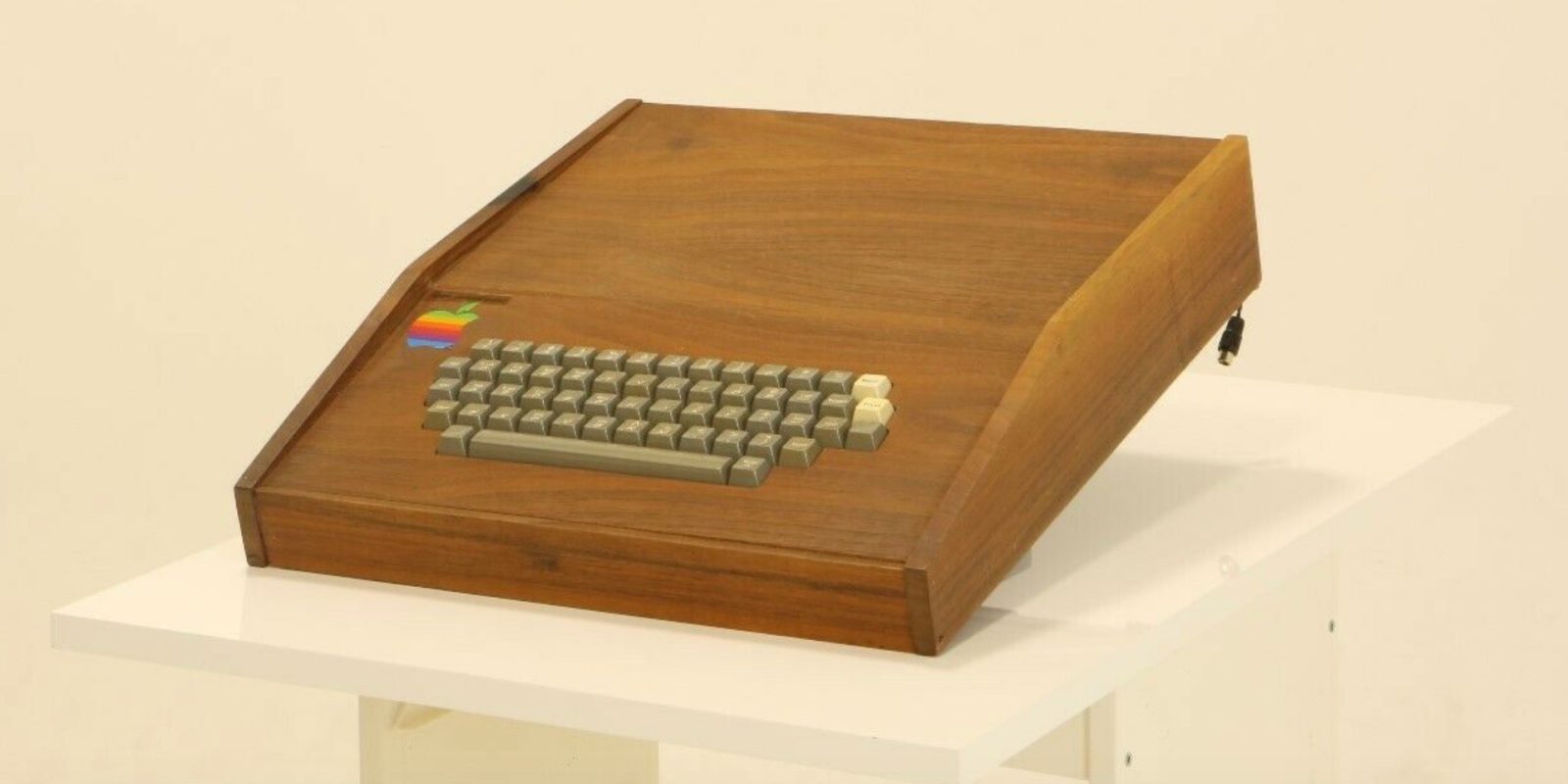 We usually see a couple of functioning Apple-1 computers up for sale each year and they usually net around $300,000-$600,000 depending on the condition and included accessories, manuals, software, etc. Now the latest working Apple-1 has gone up for sale with a steep price close to $2 million.

END_OF_DOCUMENT_TOKEN_TO_BE_REPLACED

The latest original Apple 1 computer – one of 200 original models built and marketed by the two Steves – has sold at auction for $375k, following pre-auction estimates of $300-600k …

If you have deep pockets a taste for nostalgia, there’s another opportunity to bid for one of the few remaining Apple 1 computers still in working order … 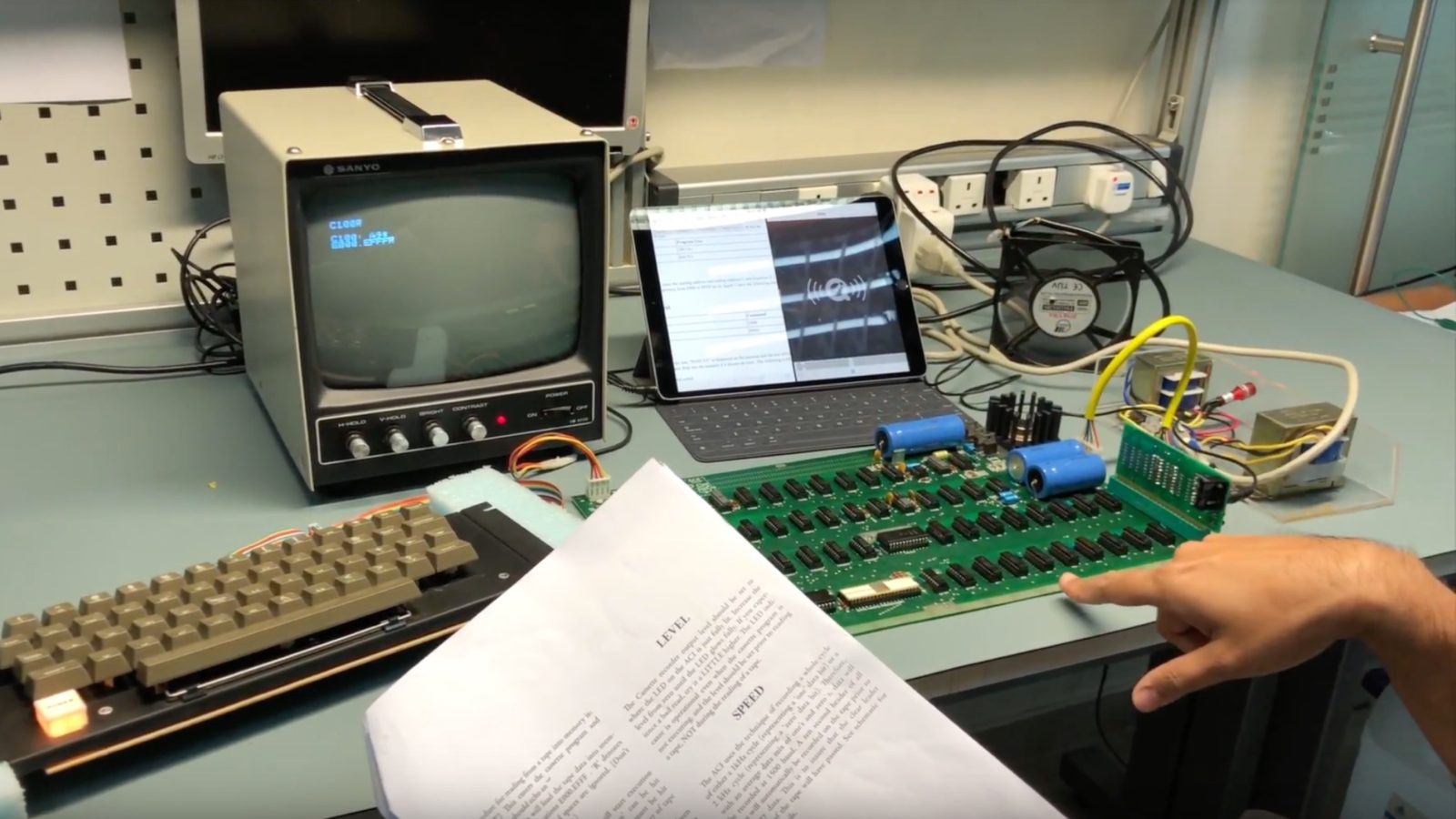 Last week, we told you about collector and former Microsoft Program Manger Jimmy Grewal’s mission to restore his recently acquired Apple I board to working condition. After rigorous testing and cleaning, Grewal and his team have fully revived the system and documented the restoration process in a new video.

END_OF_DOCUMENT_TOKEN_TO_BE_REPLACED 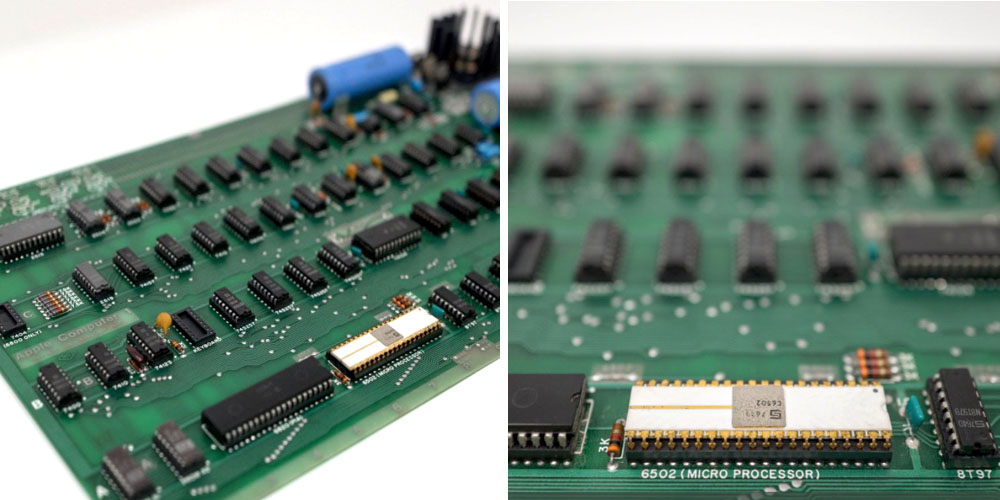 A collector of vintage Apple computers is attempting to restore a non-functional Apple I to full working order, and is documenting the process on Twitter …

END_OF_DOCUMENT_TOKEN_TO_BE_REPLACED

Another working Apple I being auctioned on CharityBuzz, with interesting history & extras

Despite there being only a handful of Apple I computers still in working order, they do seem to come up for sale with surprising frequency. The latest one, due to be auctioned next month, has an interesting history and extras …

Apple I sells at auction for $335k, the lowest price yet for a working model

An Apple I sold at Christie’s last week for $355,500, the lowest price yet seen for a recent sale of a model in working condition …

Customized Apple-1 to go up for auction this month, could fetch as much as $500k

Yet another functioning Apple-1 will hit the auction block later this month, but this machine offers a few unique characteristics that set it apart from other models that have also recently sold at auction. This particular Apple-1 is expected to fetch between $300,000 and $500,000…

END_OF_DOCUMENT_TOKEN_TO_BE_REPLACED 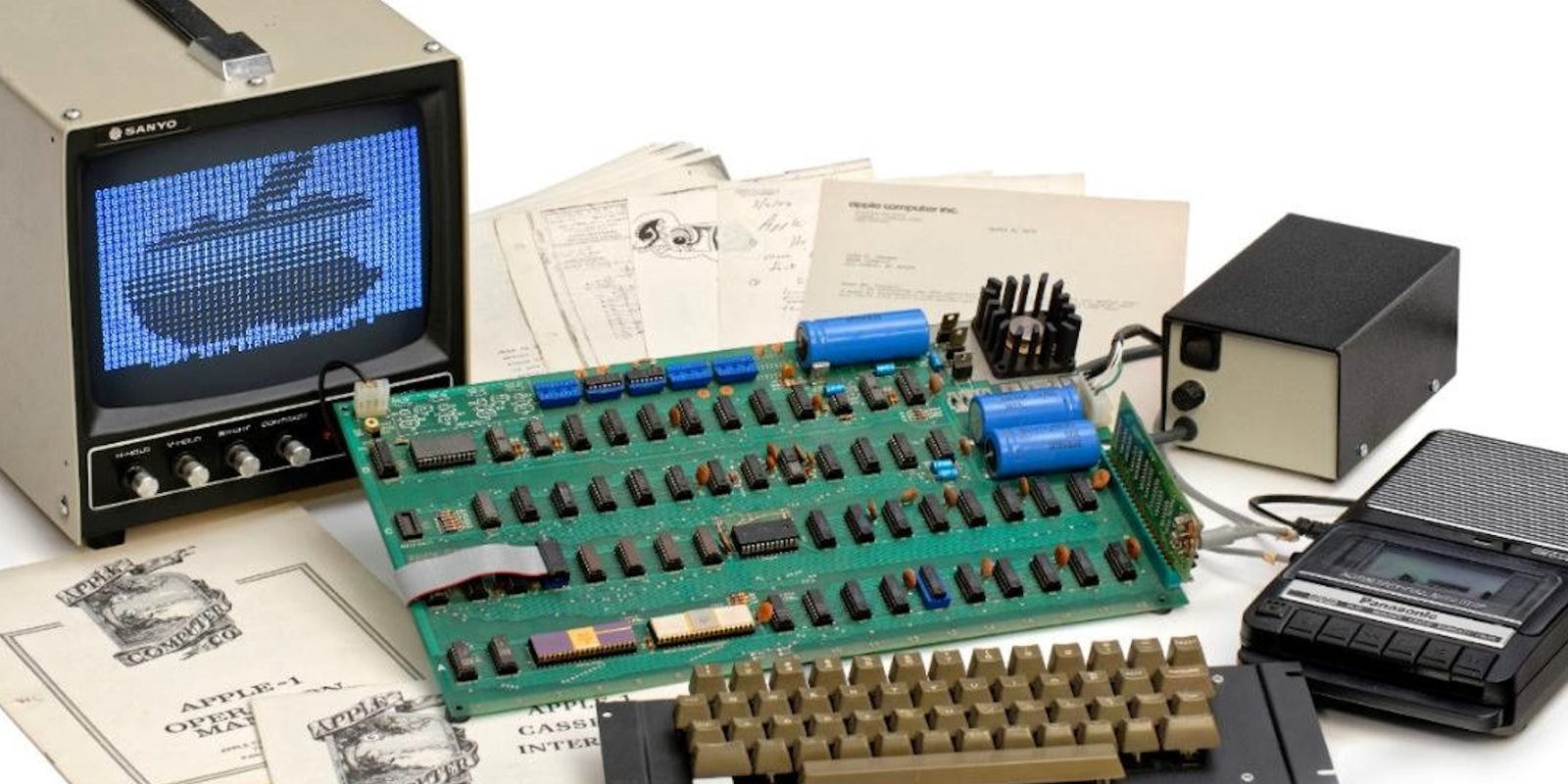 Earlier this year, we told you about a functioning Apple-1 computer that would go up for auction in Germany on May 20th. As planned, the auction took place yesterday and brought in $130,000, far less than initial expectations…

END_OF_DOCUMENT_TOKEN_TO_BE_REPLACED

Apple will still be here in 2075, says Woz, as original Apple I garage team get together 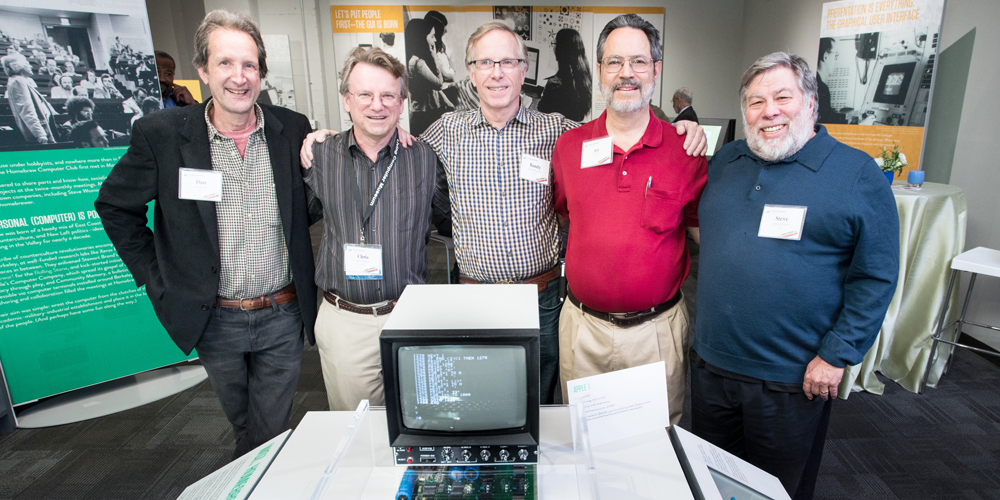 Apple co-founder Steve Wozniak has told USA Today that Apple will still be around in 2075 – alongside Google and Facebook.

Apple will be around a long time, like IBM (which was founded in 1911). Look at Apple’s cash ($246.1 billion, as of the end of its last fiscal quarter). It can invest in anything. It would be ridiculous to not expect them to be around (in 2075). The same goes for Google and Facebook.

He made the prediction ahead of the Silicon Valley Comic Con, whose theme is ‘The Future of Humanity: Where Will We Be in 2075?’ and said that he and Steve Jobs made that assumption from the start …

END_OF_DOCUMENT_TOKEN_TO_BE_REPLACED

Functioning Apple-1 to go up for auction in May, expected to fetch over $320k

Despite there being very few still in existence today, another Apple-1 computer is set to hit the auction block soon. As noted by The Telegraph, German auctioneer Team Breker will soon make a functioning Apple-1 available, estimating the machine will go for around $320,000.

END_OF_DOCUMENT_TOKEN_TO_BE_REPLACED

Earlier this summer, we reported on a “Celebration Edition” Apple I that would be going up for auction. Initial estimates pegged a value of over $1 million for the computer, but the auction today came to a close with a final selling price of $815,000. 10 percent of the proceeds from the Charitybuzz auction will benefit the Leukemia and Lymphoma Society.

END_OF_DOCUMENT_TOKEN_TO_BE_REPLACED

Rare Apple I ‘Celebration’ model hitting the auction block, could go for up to $1M

Auction site CharityBuzz, which has previously offered up things like lunch with Tim Cook, has today announced its latest Apple-centric auction. Starting on July 25th and running through August 25th, the site will be auctioning off an incredibly early model of the Apple I.

END_OF_DOCUMENT_TOKEN_TO_BE_REPLACED

Widow recycles Apple I computer, not realizing it was worth $200k

With only around 200 Apple I computers ever made, they fetch six-figure sums these days – but it seems not everyone knows their value. The San Jose Mercury News reports that a woman dropped off several boxes of electronics at a South Bay recycling company, saying she just wanted to “get rid of this stuff” to clear out her garage after her husband died.

The woman didn’t leave her details, and the company didn’t go through the boxes until some weeks later, when they discovered the vintage computer. They have now sold it to a private collector for $200,000.

It’s not all bad news for the mystery woman, though: recycling company Clean Bay Area says its policy is to give half the proceeds of sales to the original owner, so if she comes forward she’ll receive a check for $100k. Chancers will be out of luck – Vice President Victor Gichun, who took in the boxes from her, says he remembers both the woman’s face and her SUV. All she has to do to collect is show up.

An original 1976 Apple I computer said to have been built in Steve Jobs’ garage has gone on auction, with a percentage of the proceeds set to support the ALS Association. The machine is one of only 63 existing models. There are currently over 50 bids on the auction, with the highest curently sitting at $20,600 at the time of this writing.

As noted in the auction, a similar computer sold for over $900,000 to the Henry Ford Museum last September. That machine had the serial number #70, while the model in this auction carries the number #22.

10% of the final sale price will go to support the ALS Assocation to fight amyotrophic lateral sclerosis—a cause Apple executives previously took up with last year’s Ice Bucket Challenge.

You can check out the full auction listing, including many more details about the computer itself, over on eBay.

Don’t have $1M to buy an original Apple I? Video tutorial shows you how to build your own

With only around 50 Apple I computers left of the 200-ish machines made, picking one up at auction tends to be an expensive business, examples typically selling for mid to high six-figures.

But if you’re handy with a soldering-iron, modder Ben Heck is putting together a three-part video tutorial showing you how to create your very own working replica – with part one currently online. You just have to resist the temptation to add cobwebs and hit the auction houses once it’s built …

A recent auction of an Apple 1 computer has allowed an image to surface of 50 cardboard boxes containing early Apple computers from 1976 in a rare photo believed to be taken by Steve Jobs himself, according to The Daily Mail. Steve Jobs and Steve Wozniak, of course, built the first Apple computers together in Jobs’ parents home, and the photo depicts Jobs’ bedroom at the time. The company behind the iPhone and iPad has certainly come a long way.

Check below for a photo of exactly what was inside those boxes:

The Loop spotted that YouTube channel EverySteveJobsVideo has uploaded a previously-unseen video of Steve Jobs answering a question about what would be his legacy.

Rather ironically, one of the statements he made – that in a few years it wouldn’t even be possible to fire up an Apple I to see what it was like – was proven wrong by the other Steve yesterday doing just that. Mercury News reports that Steve Wozniak fired-up not just one but three Apple I computers at the History San Jose centre. Given that one recently sold for $671k, that’s about $2 million worth he powered-up …

German auction house Team Breker is auctioning one of the last remaining Apple I computers in working order, expecting it to sell for between $260k and $400k. Also available is a complete LISA system for an estimated $20-40k.