That means you’ll be able to login to your Mac using your iPhone’s fingerprint sensor rather than typing in a password each time. The app takes advantage of Apple opening up the Touch ID sensor to third-party apps for logins after previously being reserved for unlocking the device itself and authenticating App Store and iTunes purchases.

The FingerKey app includes the ability to unlock multiple computers from a distance, 256-bit AES encryption, and a Notification Center Today widget for quick access.

The developer says that support for logging into Windows and Linux computers is coming soon as is a Pattern Unlock feature for logging in via touchscreen gestures.

We recently wrote about a similar app, which also used a Bluetooth connection, that allowed users to unlock their Mac using by knocking on their iPhone’s screen.

FingerKey is available on the App Store for $1.99 and the developer shared the video below of the app in action: 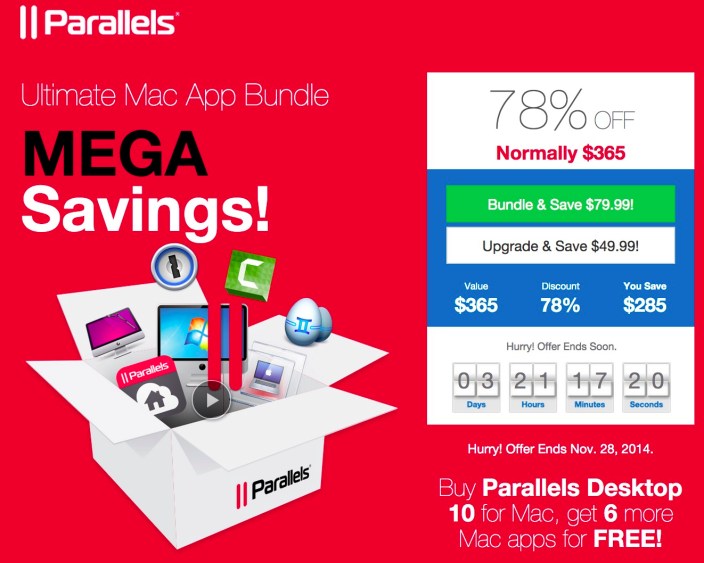 Starting this evening and running through Black Friday weekend, Parallels is running a special bundle of Mac apps for free when you upgrade to Parallels 10 for $49.99 or buy it new for $79.99. The bundled apps 1Password password manager, Camtasia screen recorder, CleanMyMac 2 file organizer/remover, Gemini file de-duplicator, Acronis True Image backup and restore software and a 2 year subscription to Parallels Access which allows you to run parallels VMs remotely on iOS and Android devices. Not a bad deal at all of you need any of these other apps.

Parallels 10 was announced in August and we reviewed it shortly thereafter noting it was the best way to run Windows and Linux VMs on a Mac.

Not sure you are into Parallels? Grab a 14 day free trial here. Just want Parallels in a shiny box? Amazon has it for $62. More info on the bundled apps below:

END_OF_DOCUMENT_TOKEN_TO_BE_REPLACED Aspyr just announced that it’s going to release the much anticipated next installment in the Borderlands series on October 14. For anyone keeping score, that’s the same day scheduled for 2K’s release on PC and consoles! The company also confirmed that Borderlands: The Pre-Sequel for Mac will feature everything the PC release has including cross-platform multiplayer and future DLC: END_OF_DOCUMENT_TOKEN_TO_BE_REPLACED

Update: Apple has issued a statement to iMore regarding this issue, stating that most Mac users are already protected unless they have configured “advanced UNIX services.” An update is in the works to protect those users.

A vulnerability in Bash, the software used to control the command shell in many flavors of Unix, has been shown to be present in OS X – with some security researchers saying that the flaw could pose a bigger threat than the Heartbleed vulnerabilty discovered last year (which affected many Unix systems but not OS X).

The Bash vulnerability being referred to by some as ‘Shell Shock’ allows an attacker to run a wide range of malicious code remotely. It was discovered by security researchers at RedHat, and is described in detail in a blog post.