The stores, people, and ideas that shaped Apple retail in 2019 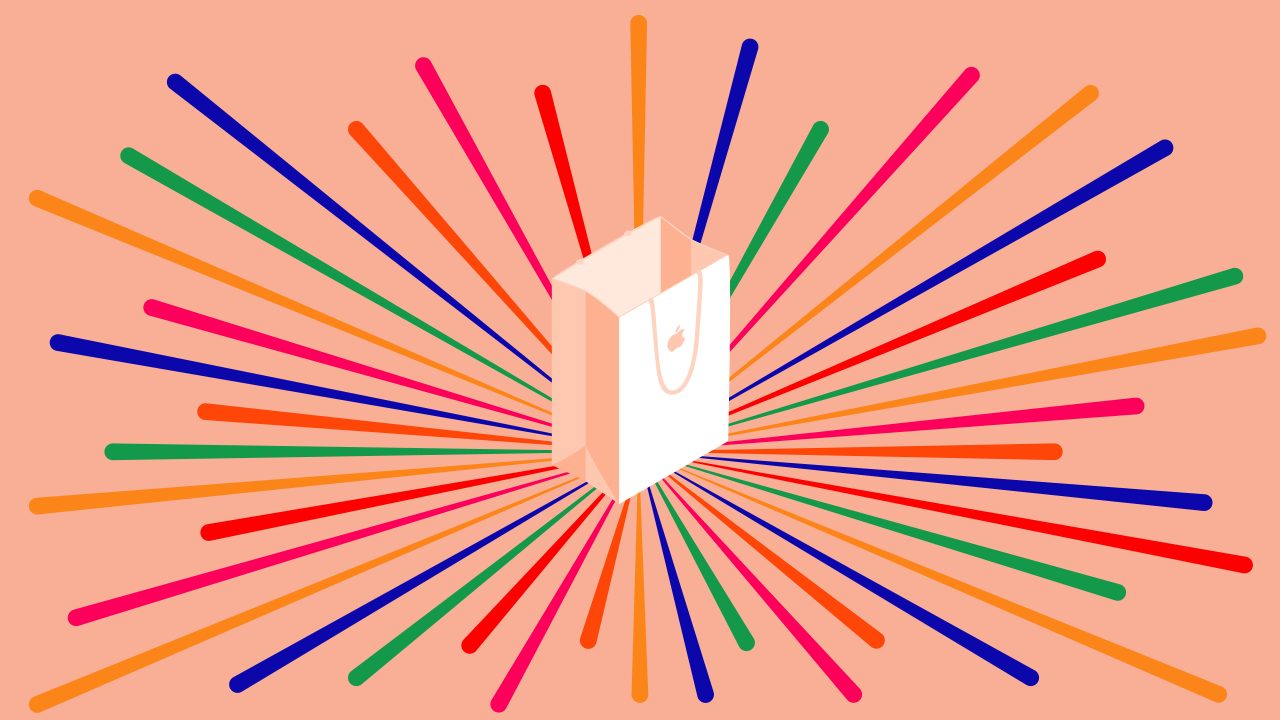 Apple has spent the past year fine-tuning its fleet of retail stores across the world. A massive upgrade project brought the latest experience to dozens of locations. Creative sessions tightened focus and deepened their goals. New initiatives sought to amplify the unique strengths only Apple Stores can offer.

This is part one of a three-part series documenting Apple retail in 2019. In this section, we’ll look at Apple’s expansions, upgrades, and new in-store initiatives.

For in-depth looks at Apple Store architecture and Today at Apple over the past year, visit parts two and three. For further background, check out last year’s field guide to Apple retail in 2018 or browse Department Map, a glossary designed to help you learn more about Apple Stores. 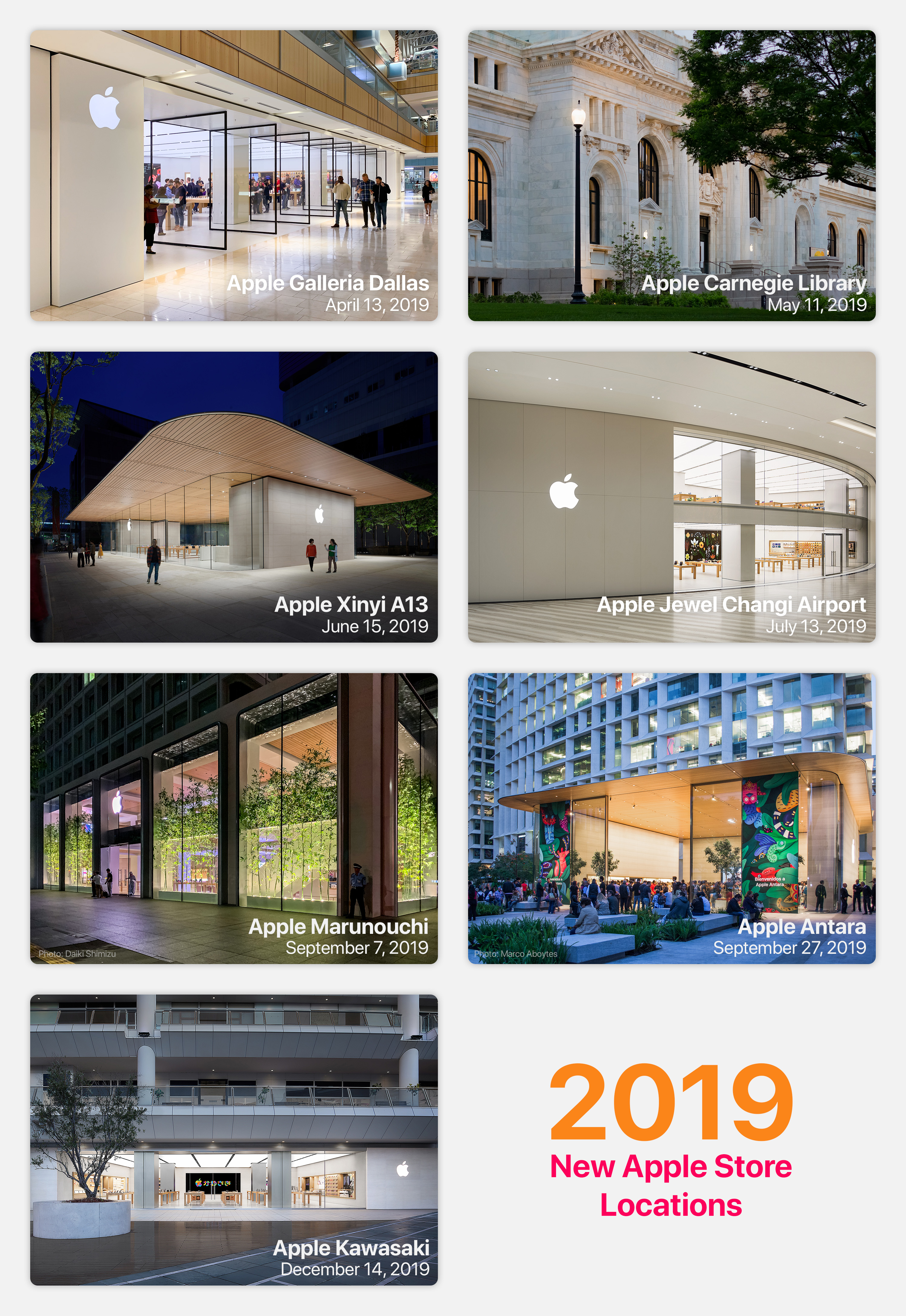 Apple operates 510 stores worldwide. In 2019, seven entirely new locations opened and three closed permanently for strategic reasons. With many major markets already served by at least one store, Apple has devoted significant effort to maintaining and updating the investments it has already made.

2019 was a year of seconds — in a good way. Apple opened second locations in Washington, D.C., Taiwan, Singapore, and Mexico. Each store complements an existing location nearby with unique experiences and greater access to Today at Apple sessions.

New stores in Kawasaki and Tokyo’s Marunouchi District fulfilled Apple’s promise of continued investments in Japan. Japan’s store lineup received more attention in 2018 and 2019 than any other region outside the United States. That attention included the shuttering of Apple Sendai Ichibancho, the country’s smallest store and only Apple location north of Tokyo. 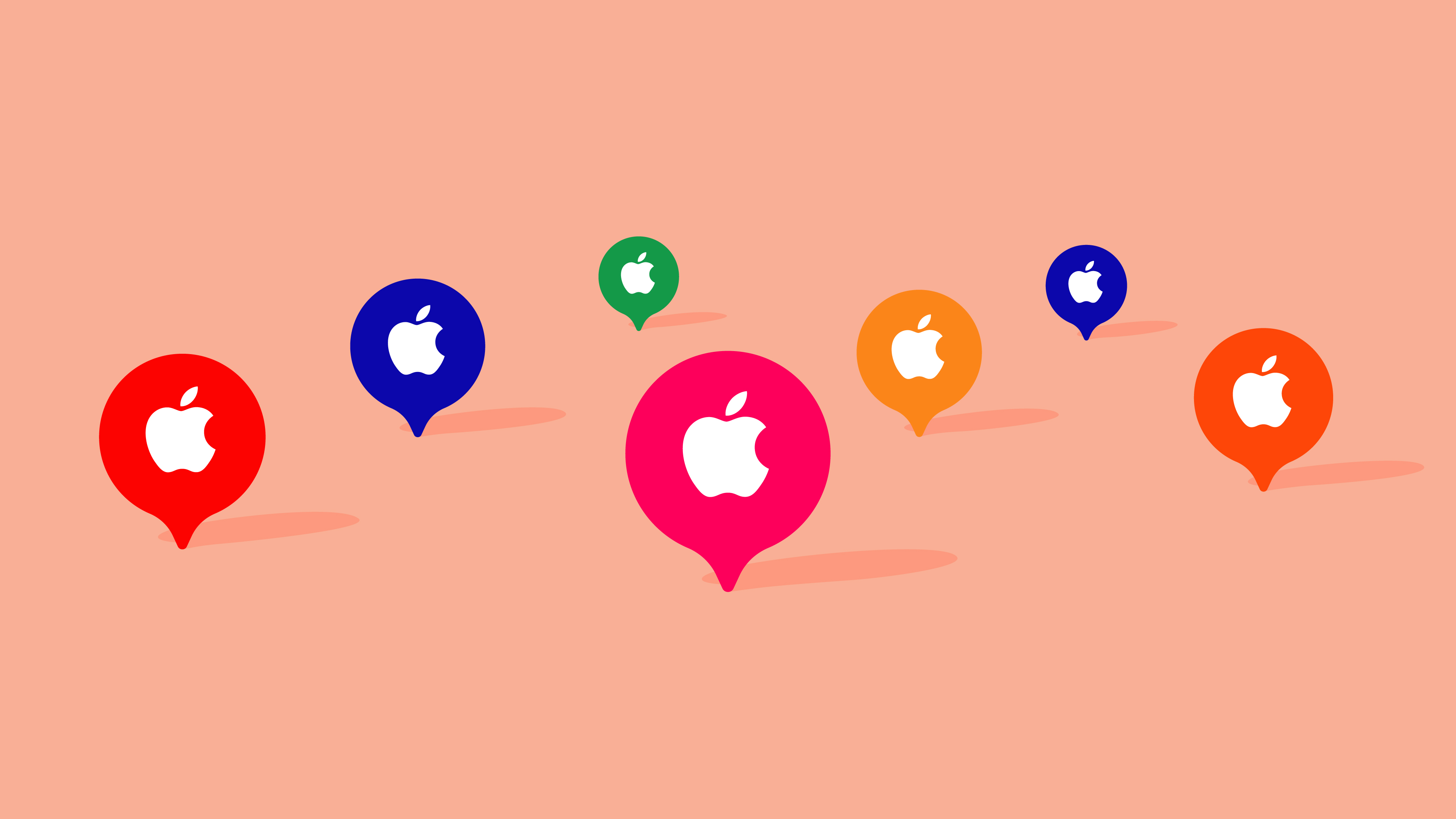 One curious exception to 2019’s rollout was Apple Galleria Dallas, a relatively standard indoor mall store with a relatively nonstandard story. The store’s opening coincided with the permanent closures of Apple Willow Bend and Stonebriar in nearby Plano and Frisco, Texas. Willow Bend was Apple’s first store in Texas and the first with New Store Design elements like a Forum and video wall to close anywhere in the world. Though unconfirmed, it is widely believed that the consolidation was an effort to physically leave the Eastern District of Texas, a notorious home of excessive patent litigation.

Plans for an Australian flagship store in Melbourne’s Federation Square were put back on the shelf this year after Heritage Victoria refused to grant a demolition permit for the square’s Yarra Building. The divisive project was supported by some in favor of reimagining Federation Square but strongly opposed by citizen groups concerned about corporate presence in a public space. Apple hasn’t announced any plans to build at a different location in Melbourne. 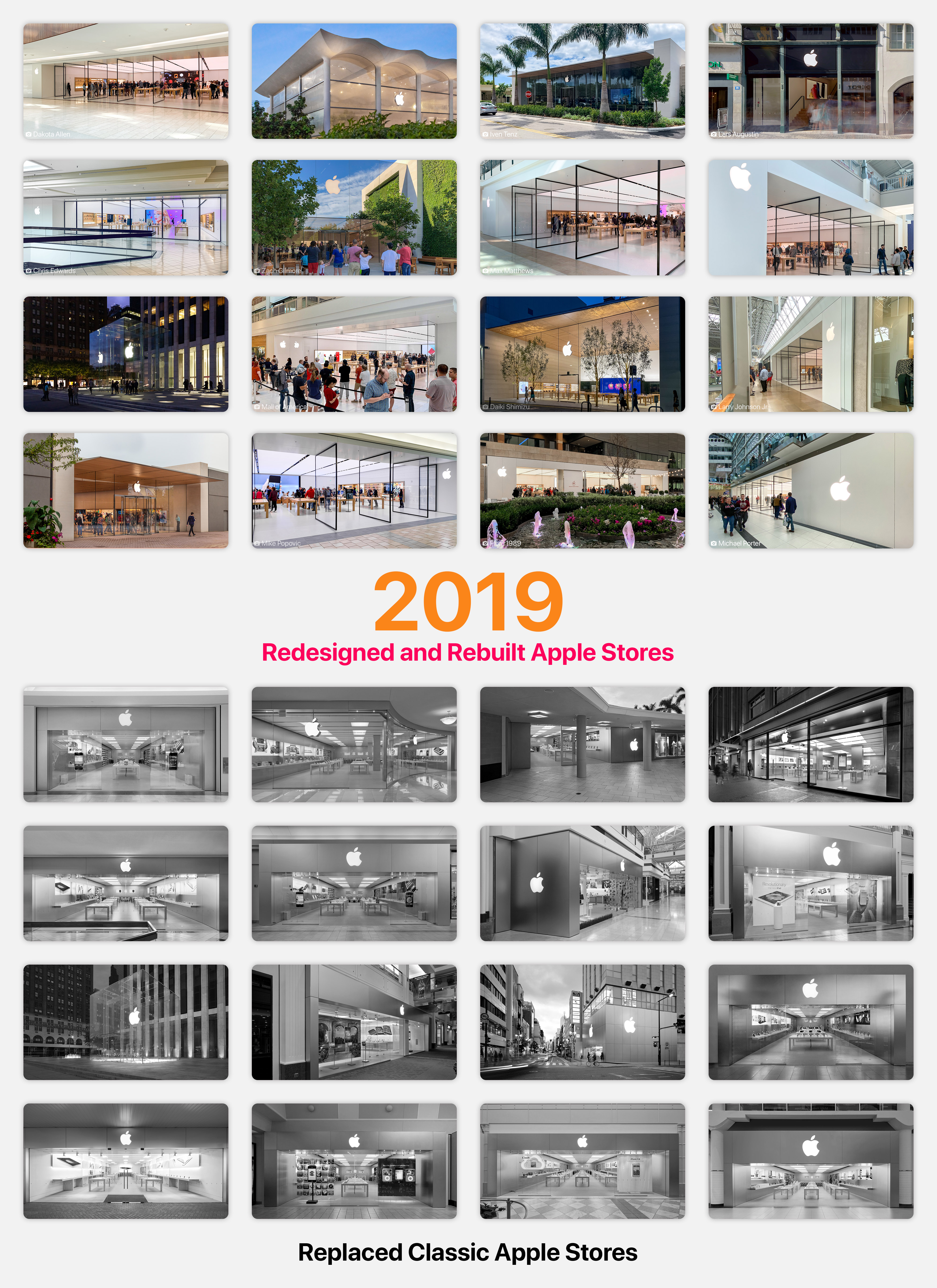 Sixteen Apple Stores — largely U.S. locations — were completely rebuilt or relocated in 2019 with all-new designs and greatly expanded layouts. Some like Apple Natick and Altamonte expanded in place and now feature a contemporary design in a standard mall space. Others like Apple Aventura and Oxmoor transformed into stores with one-of-a-kind architecture and a deep community connection.

Apple Fifth Avenue in New York stole the show this year, with its multiyear renovation culminating in a spectacular iPhone 11 launch day reopening by Tim Cook and Deirdre O’Brien. Other notable rebuilt stores in 2019 include Apple Fukuoka — another piece in Japan’s expansion puzzle — and Apple Eaton Centre, which owns the title of the first store in Canada with Apple’s latest design.

Apple Rennweg in Zurich, Switzerland opened to replace Apple Bahnhofstrasse. The move from a prestigious shopping corridor to a petite nearby storefront is possibly due to planned renovations and ownership unrest at the building Apple previously occupied. Apple Rennweg is thought of as a temporary store but not listed as such, indicating that no definitive timeline has been established for a full new location. 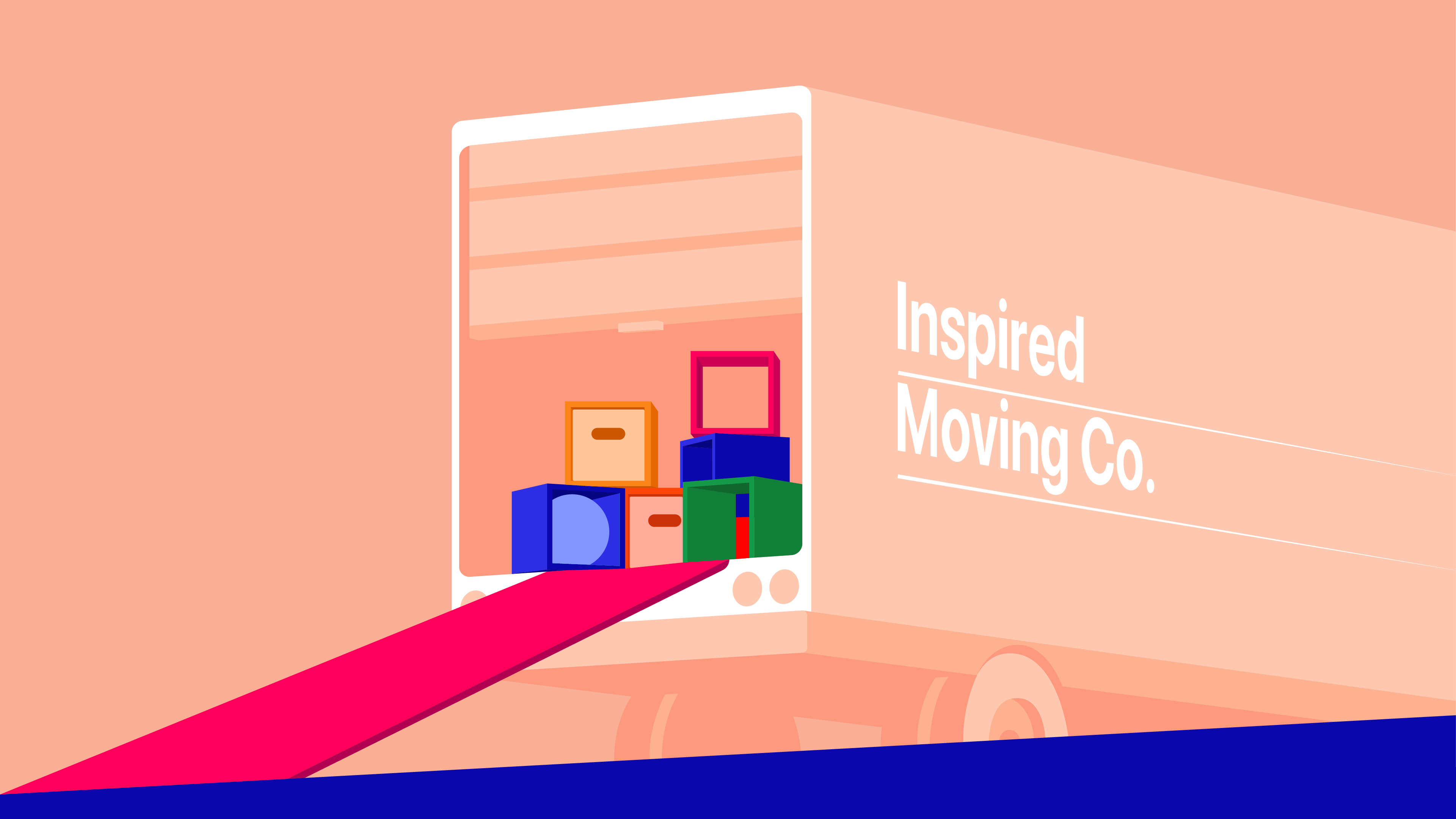 If you’re waiting for your local store to expand, we created a guide of what you can expect to see.

The Year Of The Video Wall

Apple’s store opening and rebuilding numbers fare similarly year-over-year, but its efforts to better equip existing stores — classic locations — have taken off. In 2019, 43 classic stores replaced their Genius Bar with a Forum and video wall for Today at Apple sessions while largely maintaining the rest of their original design and layout. These upgrades differ from rebuilt stores because they can usually be completed in just weeks rather than months. Most stores stay open during renovation. Sweden is the only country lacking at least one Apple Store with a Forum. Switzerland added its first this year.

Early video walls were 6K resolution and built from individual LED display units that were often visible in direct lighting. The latest video wall installations are entirely 8K resolution with higher quality panels that appear virtually seamless and consistent in any light. Many video walls are now self-contained fixtures. Freestanding designs allow Apple the flexibility to upgrade stores built without the possibility of a Forum in mind. 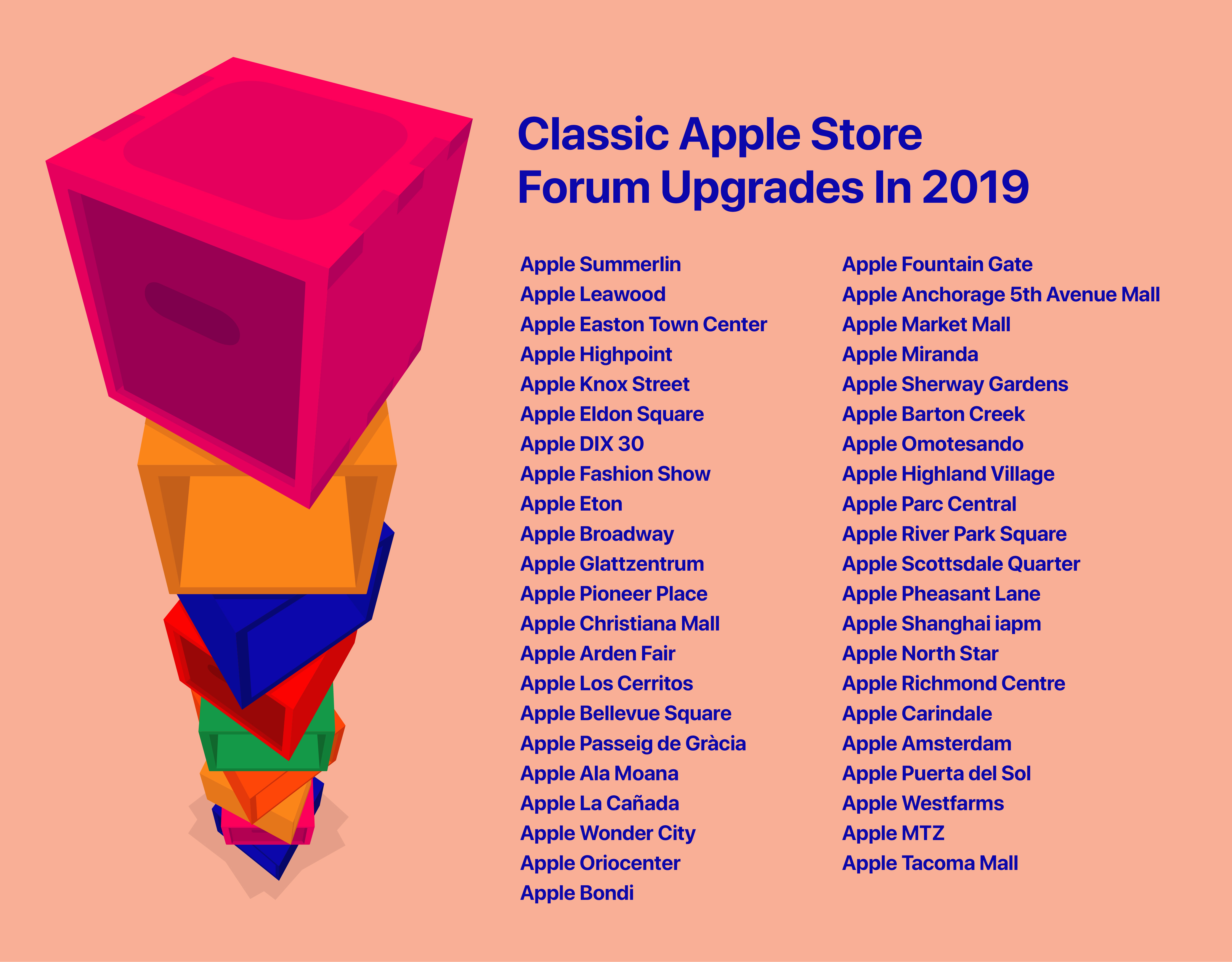 Classic store upgrades are less about the hardware and more about a change in atmosphere and ideas. Every store that adds a Today at Apple Forum is instantly reinvigorated with new energy and creativity. Customer posts on Instagram and Twitter dramatically rise, and more photos and artwork created in sessions are published.

Upgrades occupied a significant amount of Apple’s time in 2019, and it was time well spent. The changes add years of useful life to classic stores. A video wall is perhaps the most effective way to boost awareness of Today at Apple sessions. Flagship locations like Apple Omotesando and Passeig de Gràcia also add Avenue display shelving and contemporary fixtures during upgrades, effectively bringing the entire New Store Design experience to a classic store. 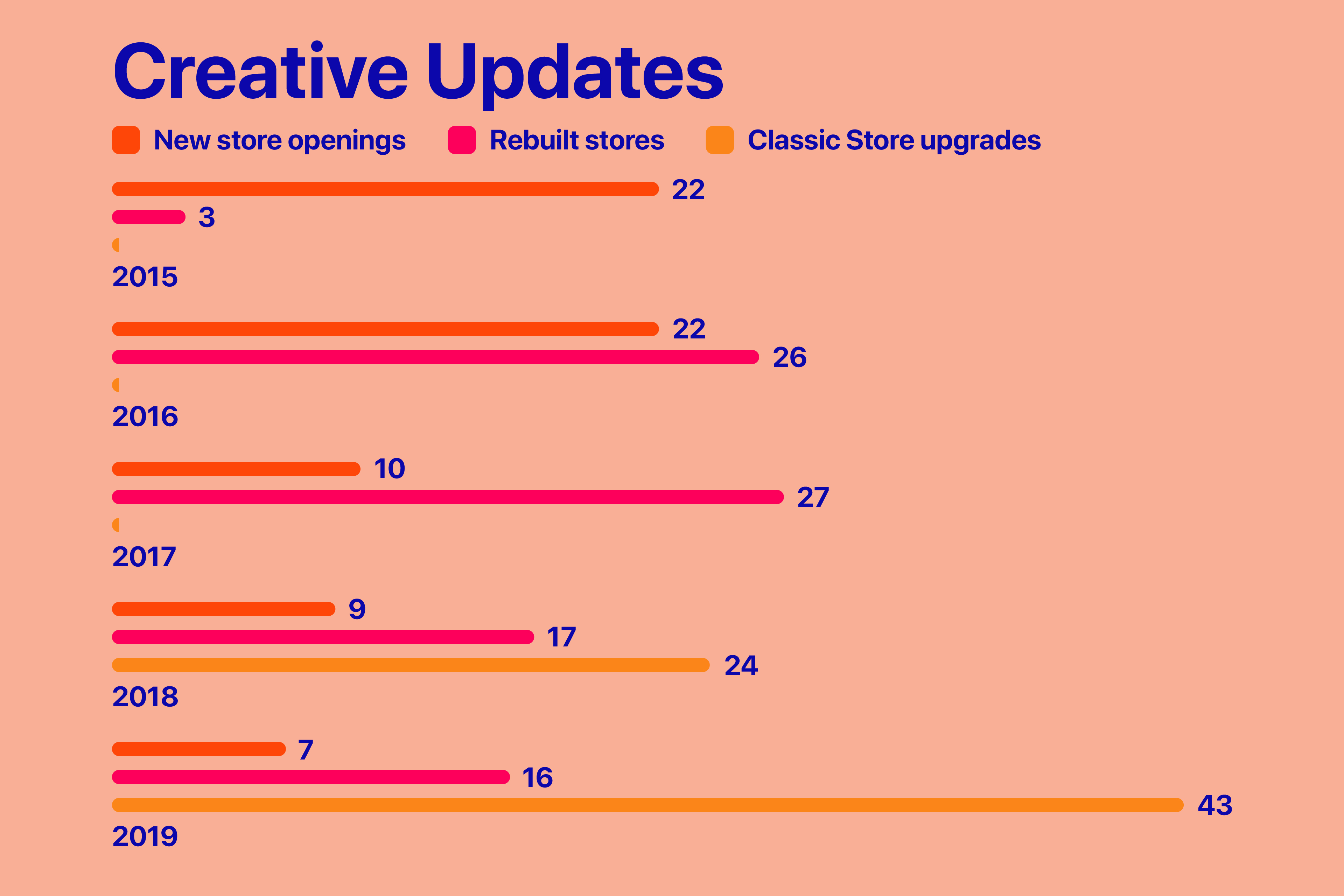 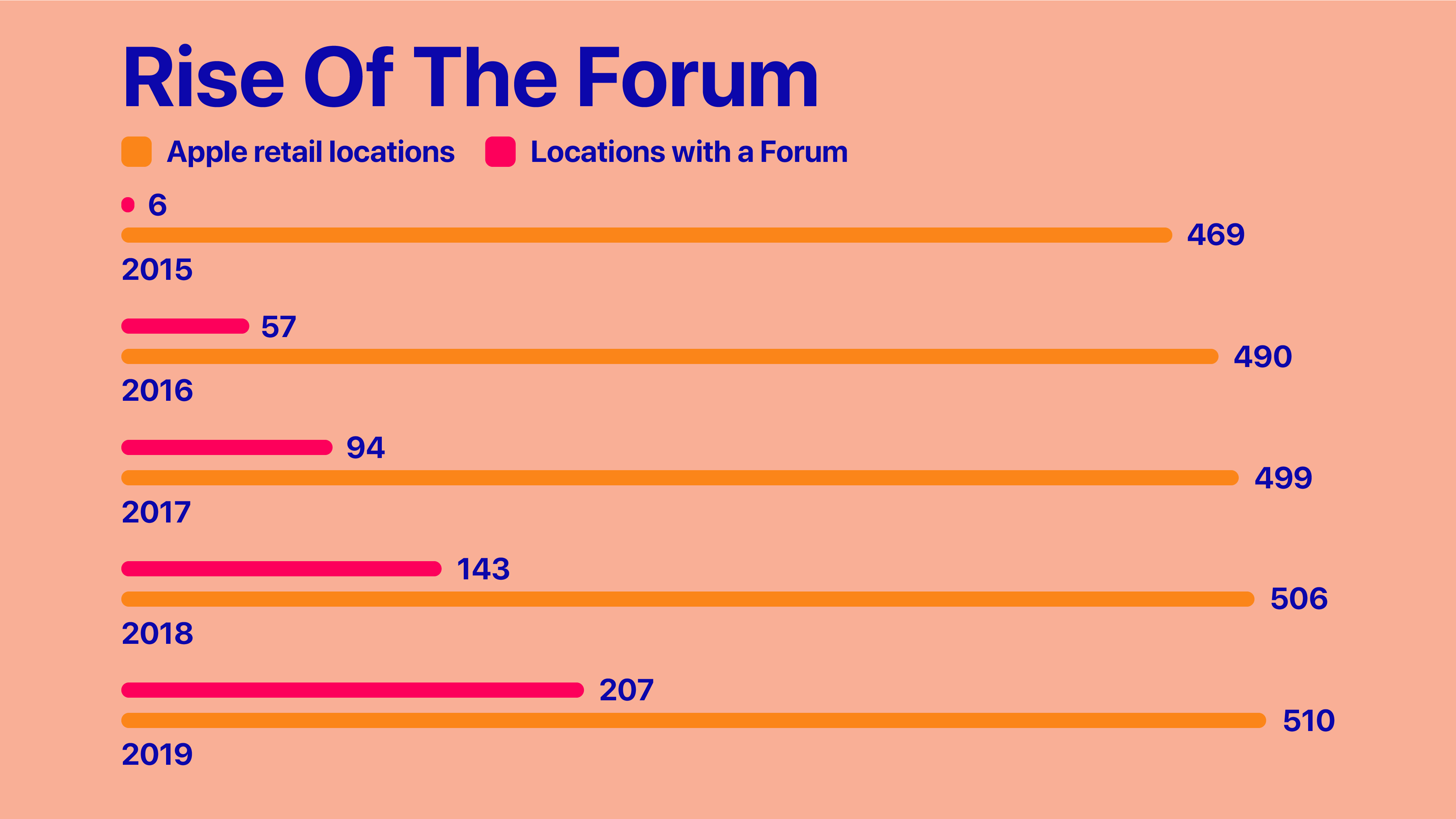 At last October’s special event, Angela Ahrendts promised Apple would create Forums in over 70 stores per year around the world. How did it do? A total of 43 classic stores were upgraded. Of the 16 stores rebuilt, 15 have a Forum, as do all seven newly-opened stores. Add it all together, and that’s 65 new Forums. It’s not quite 70, but still hugely impressive given the variability of project timelines across the globe. Last year, 49 new Forums were created. In 2017, 37. 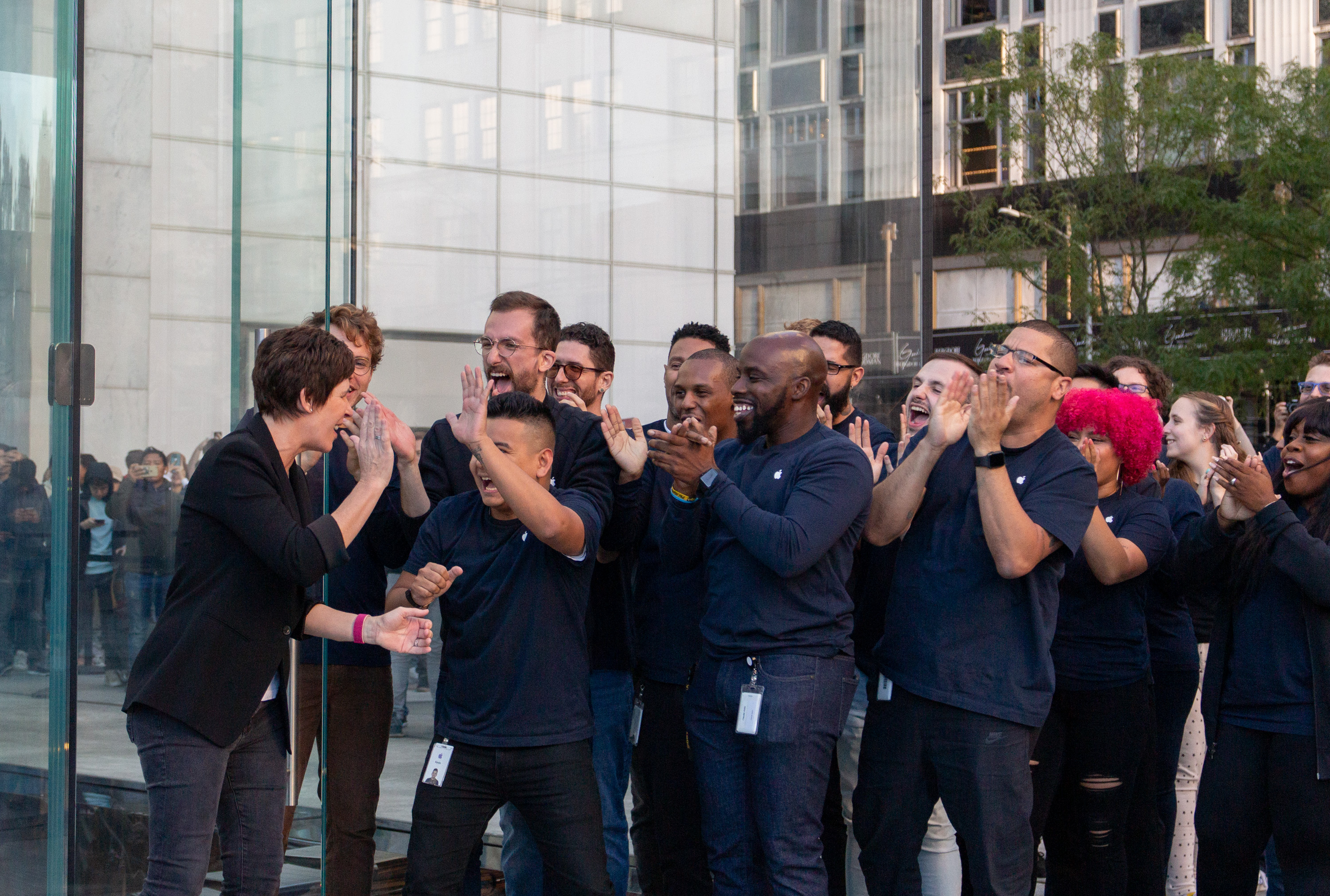 February began with the surprising announcement that Angela Ahrendts, Apple retail SVP for five years, was planning to leave the company. Apple’s New Store Design strategy and Today at Apple were rolled out entirely within Ahrendts’ tenure, so a switch in leadership opened the possibility of significant changes to the daily lives of Apple’s more than 70,000 retail employees. 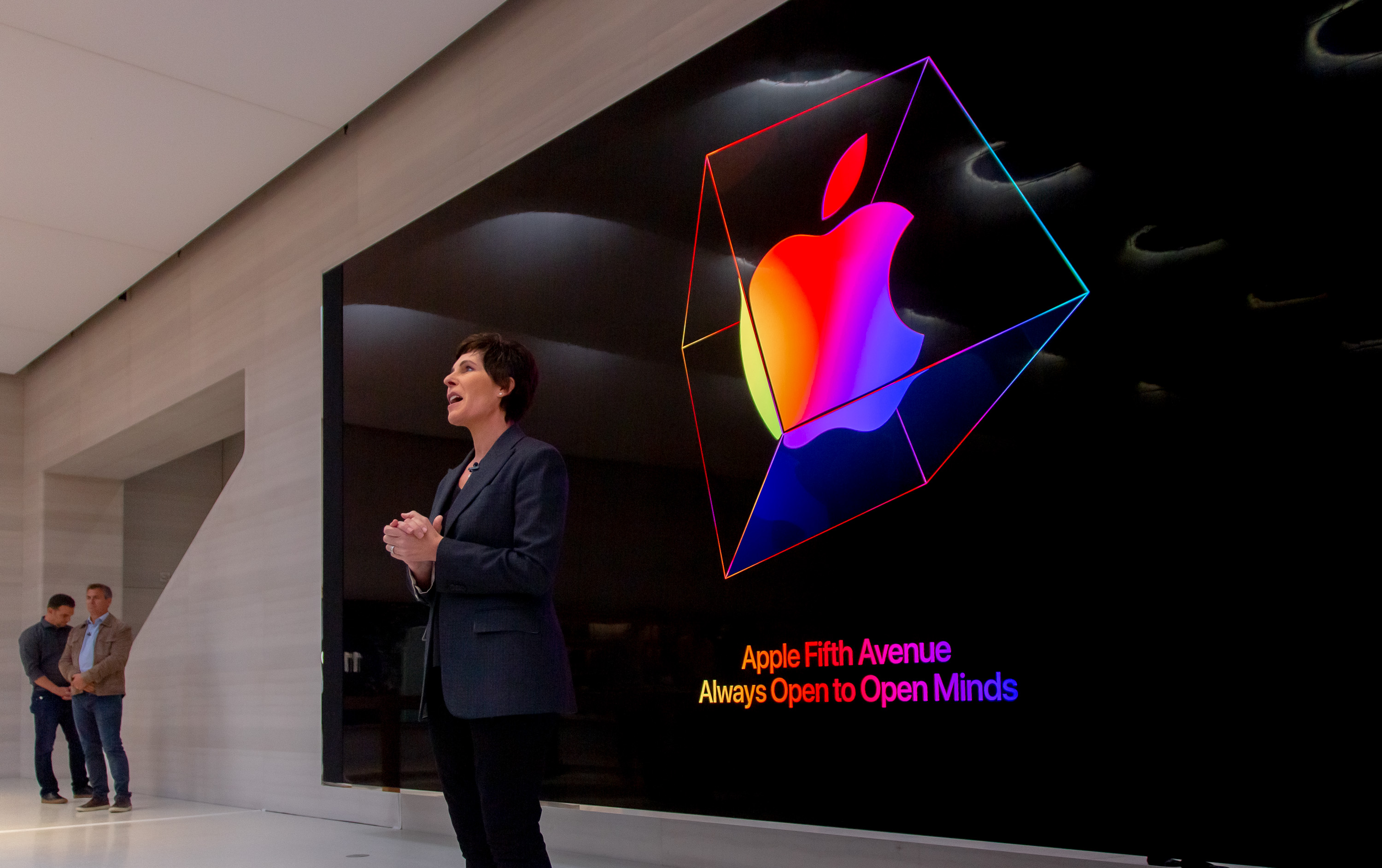 2019 was marked by a series of modest changes that are collectively very meaningful. Apple Stores under Deirdre O’Brien have embraced the community by encouraging an excitement that was once a signature element of product launch day lines. In April, O’Brien joined Instagram, where she shares photos from store visits, announces new store openings, highlights Apple’s team members, and now even features Today at Apple sessions. 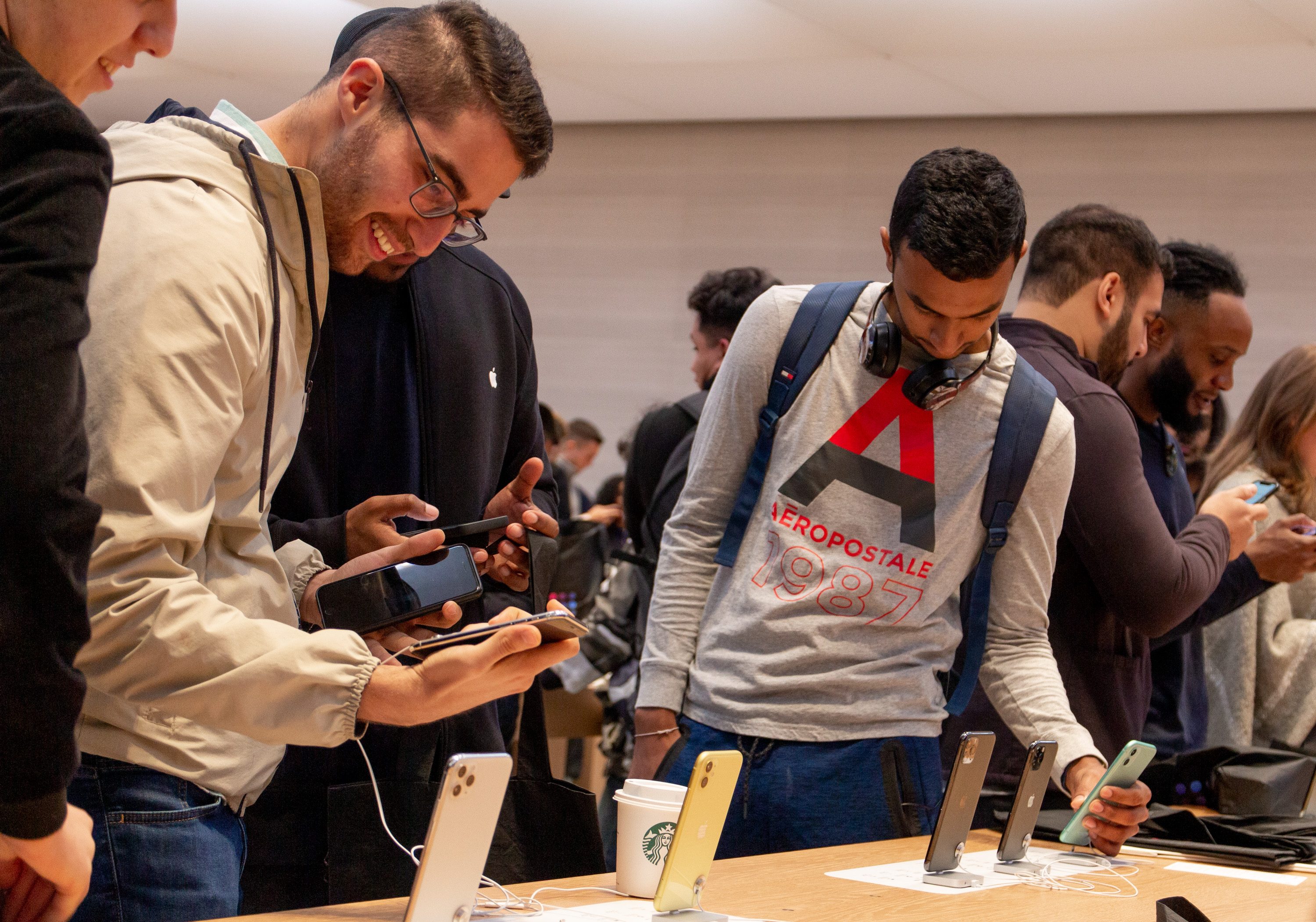 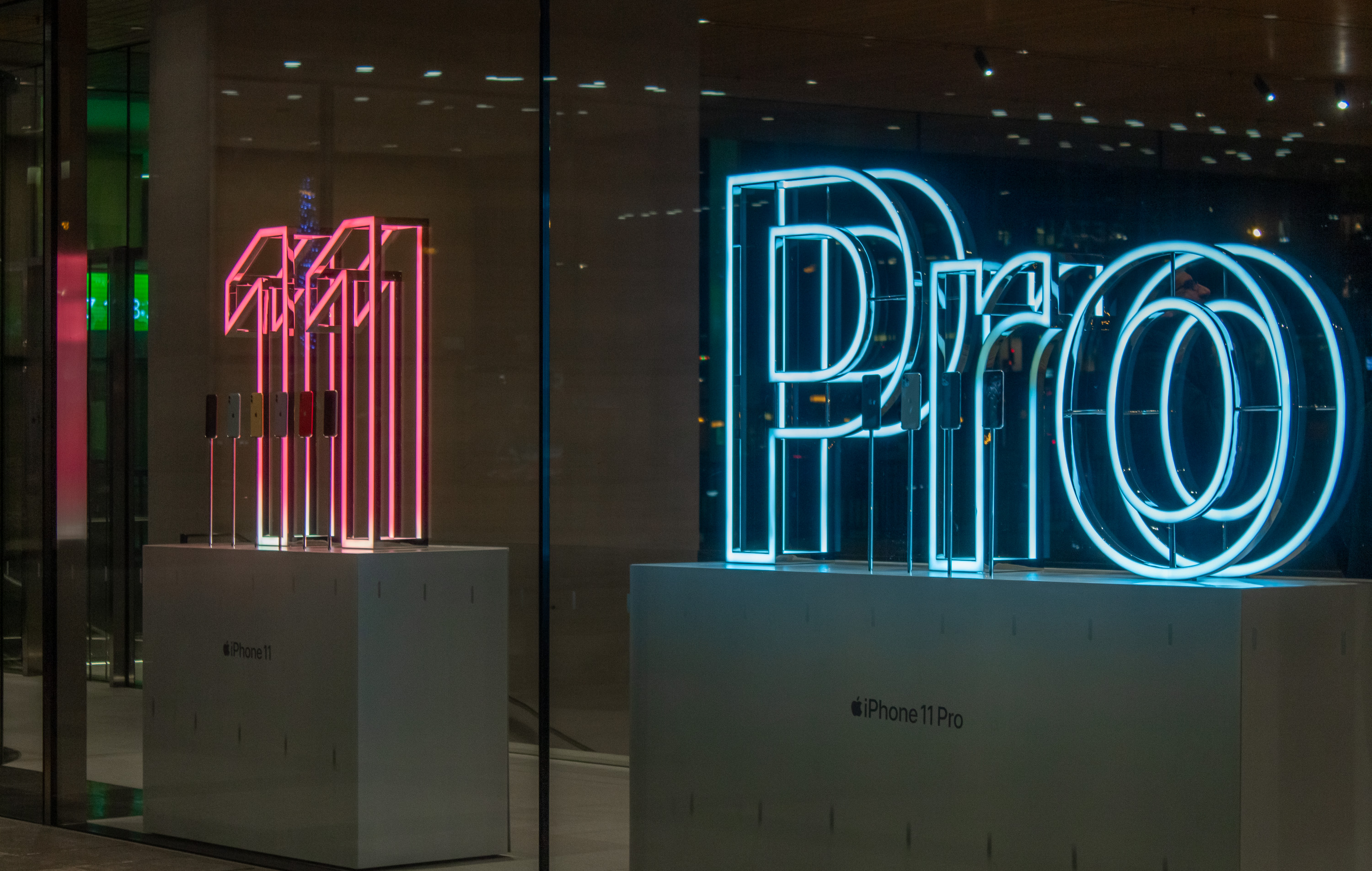 The fun of a new iPhone release in-store was brought back in spectacular fashion after years of fans trending toward online ordering. Apple tends to schedule store projects to coincide with launch days, but this year the new Apple Fifth Avenue made the iPhone 11 a little more special. O’Brien even noted that Apple Stores are “the best place for a celebration.” For the first time in years, Apple brought back window displays for the iPhone 11, 11 Pro, and later AirPods Pro.

Today at Apple expanded in new ways to embrace a wider community as well, including support from the Mayor of London on a collection of Made in LDN sessions, and a partnership with the New Museum to create immersive augmented reality experiences at select stores. In several cities, Apple teamed up with cultural institutions to host sessions that start outside of stores for the first time.

You can learn more about everything new for Today at Apple in 2019 in part three of our year in review. (Coming December 19) 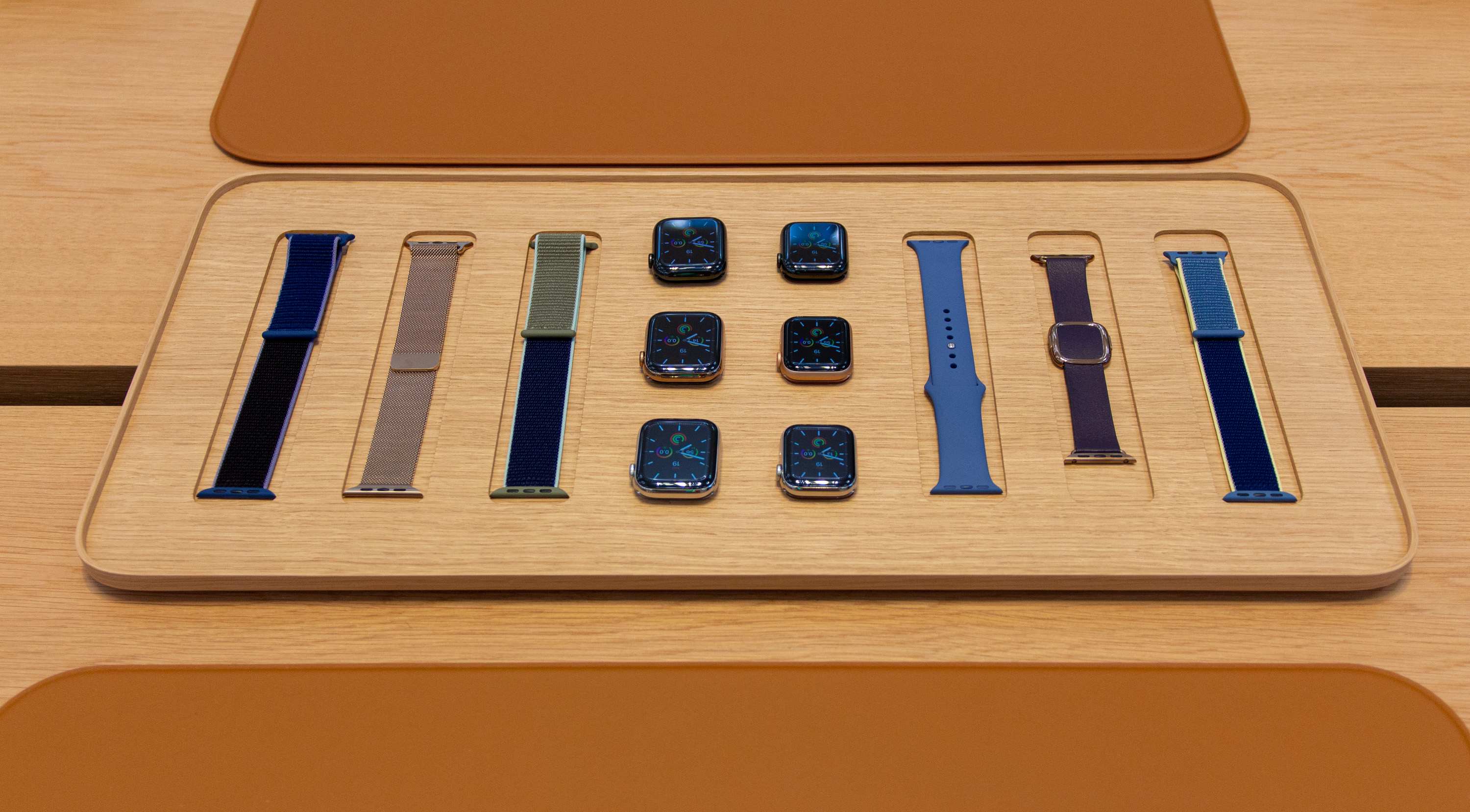 New merchandising, sales, and support strategies in 2019 aimed to remove ambiguity from the shopping experience and streamline common frustrations.

In June, Apple completed an expansion of its partnership with Best Buy to give more customers access to safe and reliable device repairs. With over 1,800 third-party Apple Authorized Service Providers in the United States, it’s now easier for people who live beyond the range of an Apple Store to find high-quality service. The increased capacity to handle repairs may also reduce strain on Genius Bars at Apple Stores, where appointment slots are often booked full and wait times excessive. 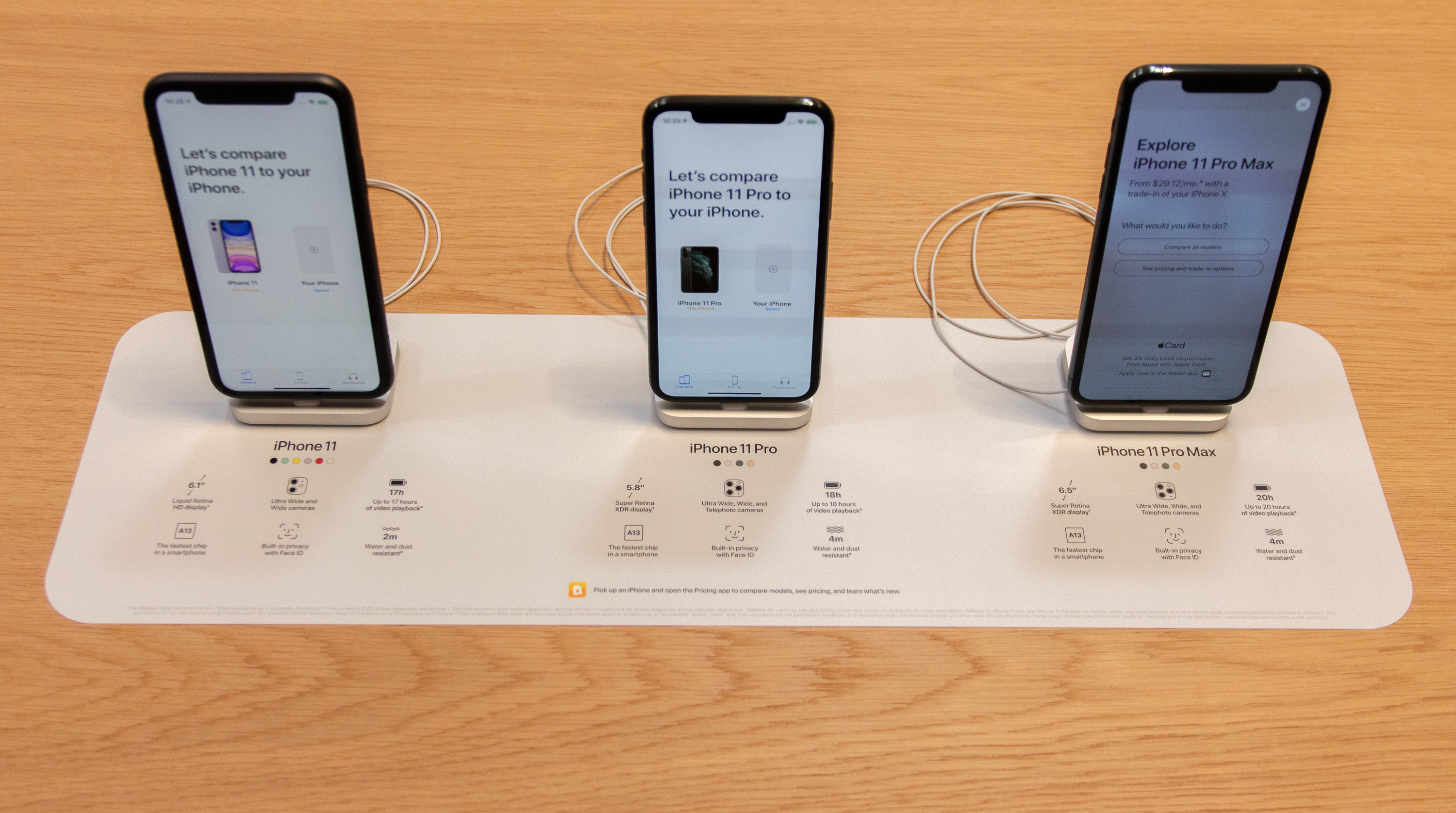 Apple also began piloting several merchandising changes in select stores in June that would later roll out globally with the release of the iPhone 11 and Apple Watch Series 5. New pricing mats display specifications and upgrade information for iPhone models without the need to consult a store employee or open the Pricing app installed on demo phones. Easels designating an Express Checkout zone clearly guide customers to where they can find assistance. 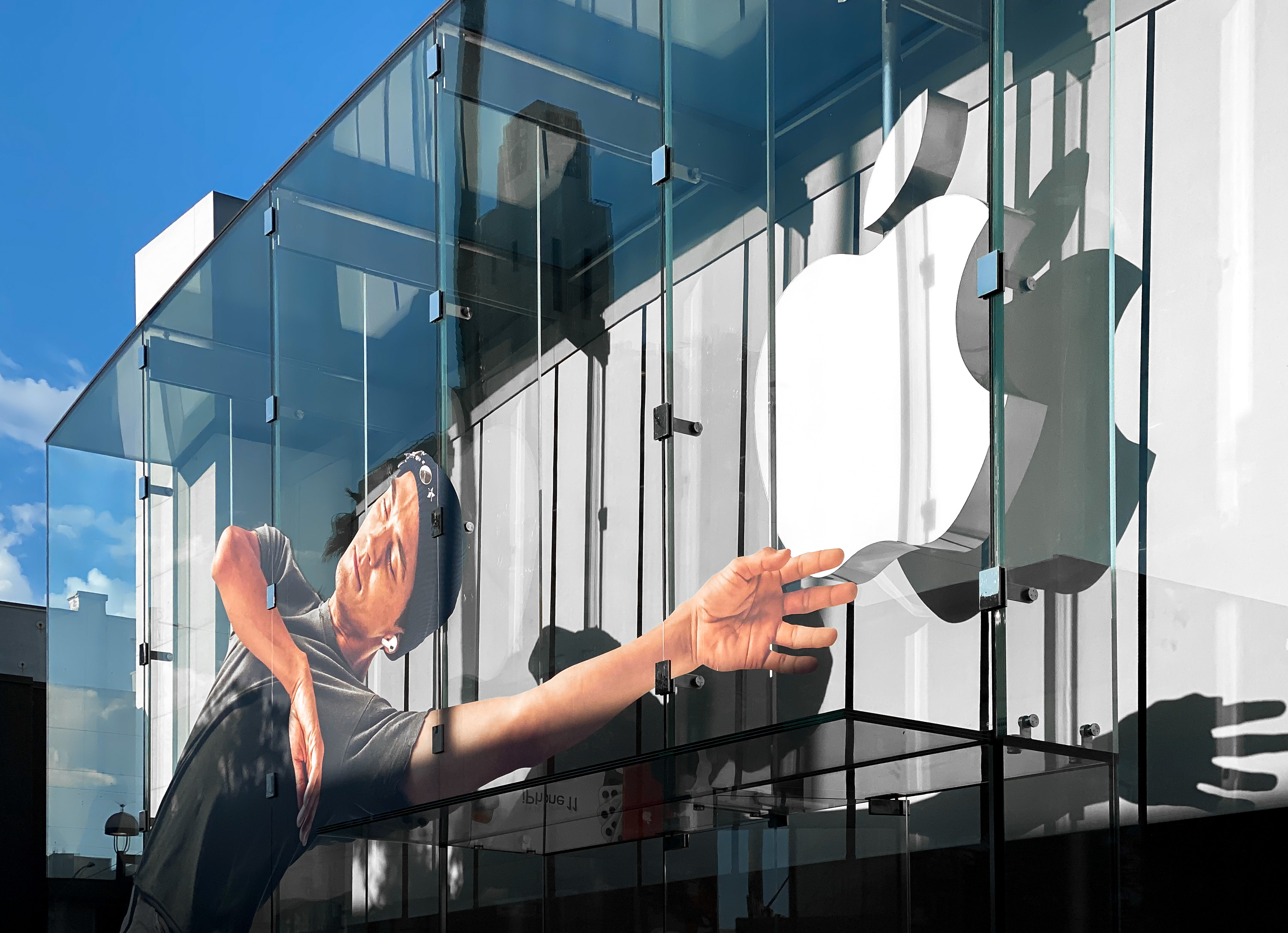 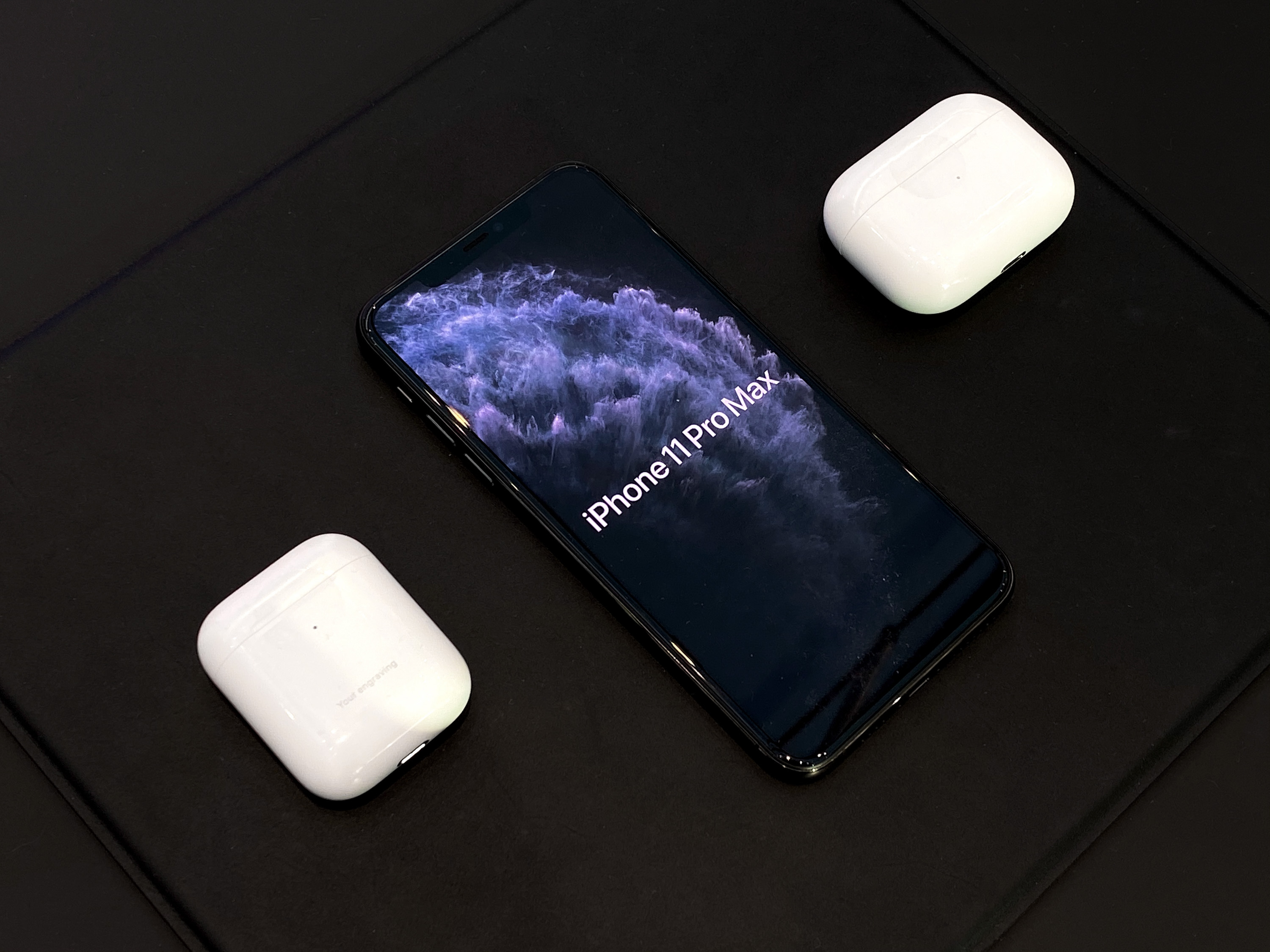 Fixtures now known as Apple Watch Studio were previewed in June. Both online and in-store, customers can mix and match any band with any watch case to create their own style. New watch band trays and demo iPads make the experience of trying on an Apple Watch much more straightforward. Similar custom try-on stations were brought to several flagship stores for the launch weekend of AirPods Pro. 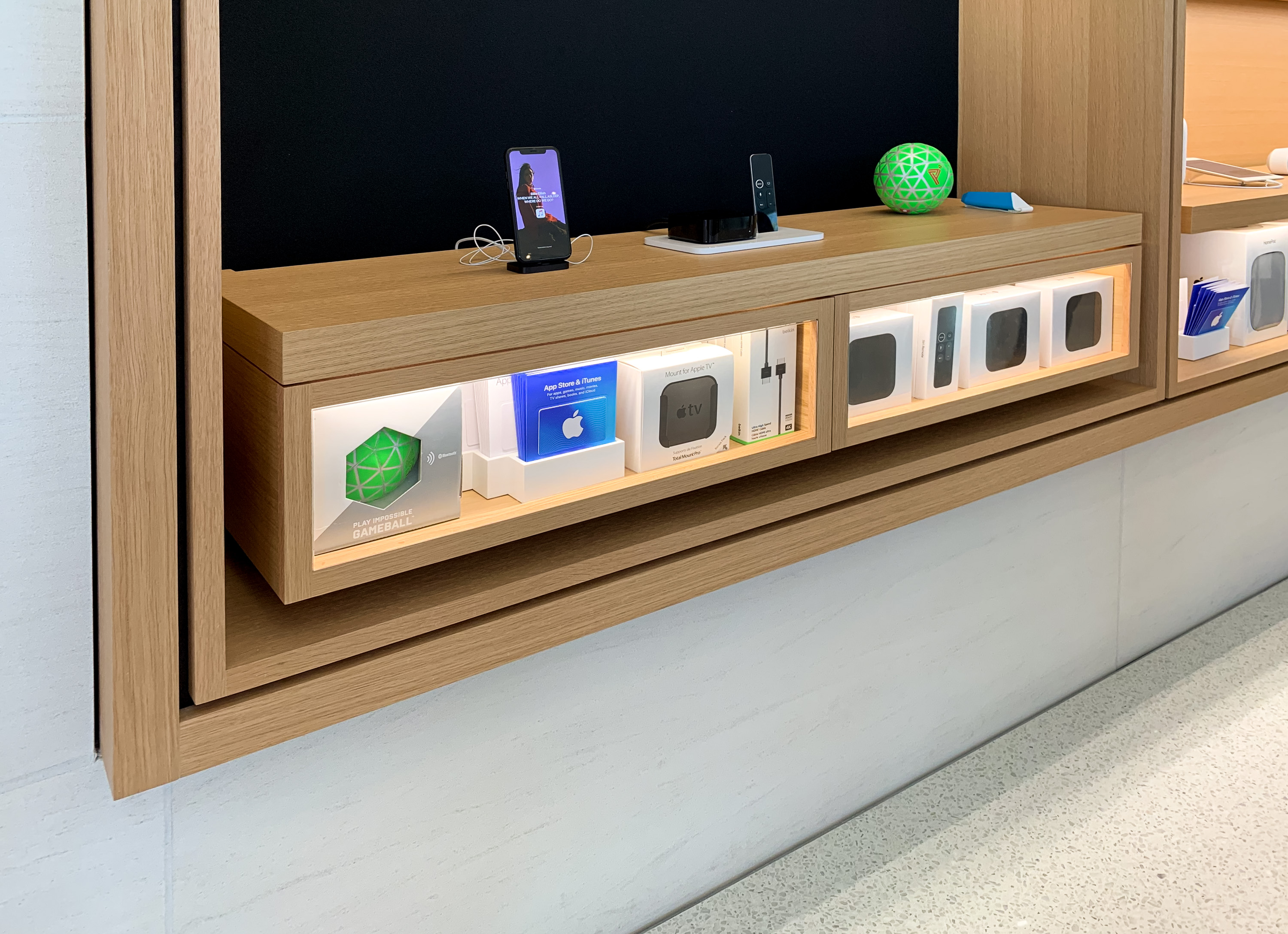 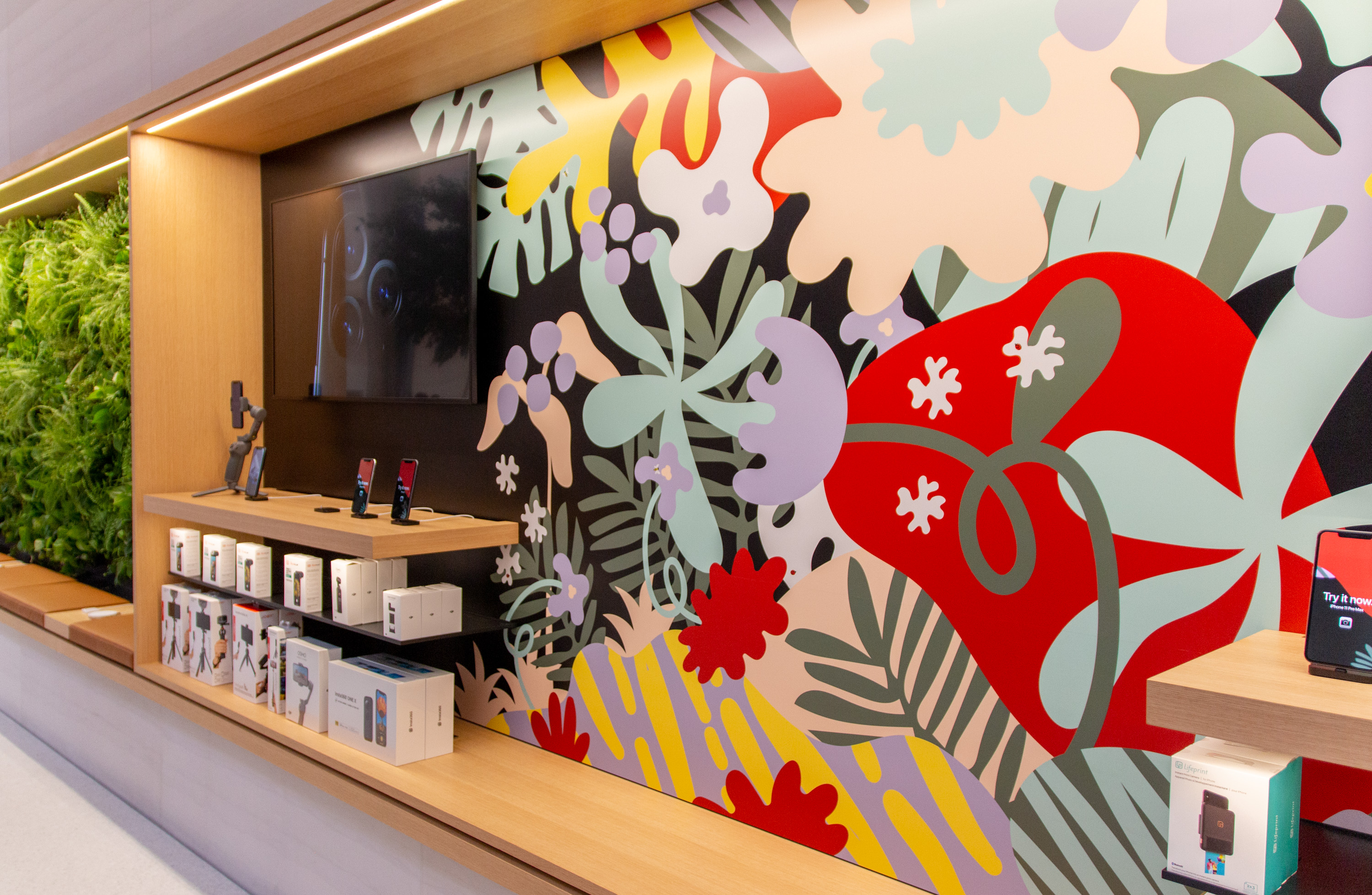 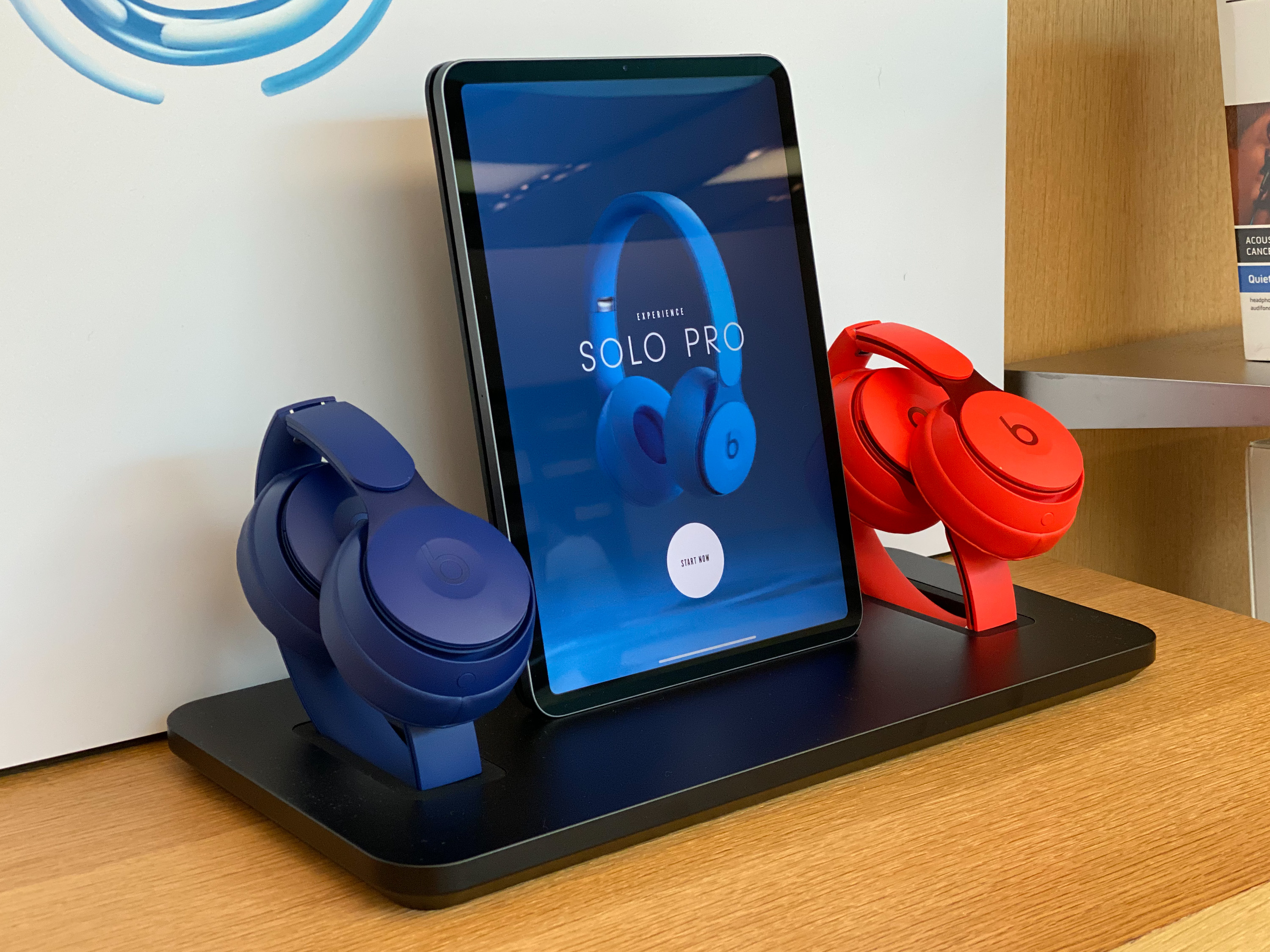 Fall brought the arrival of custom display docks for Beats Solo Pro and Powerbeats Pro headphones. The fixtures include apps that help customers learn about key features of the headphones. Coinciding with the December launch of the new Mac Pro and Pro Display XDR, Apple removed LG UltraFine monitors from display. The latest Mac mini is now merchandised beside an iPad mini running the Pricing app. The new Mac Pro and Pro Display XDR will initially be displayed in just a few dozen major stores across the world. 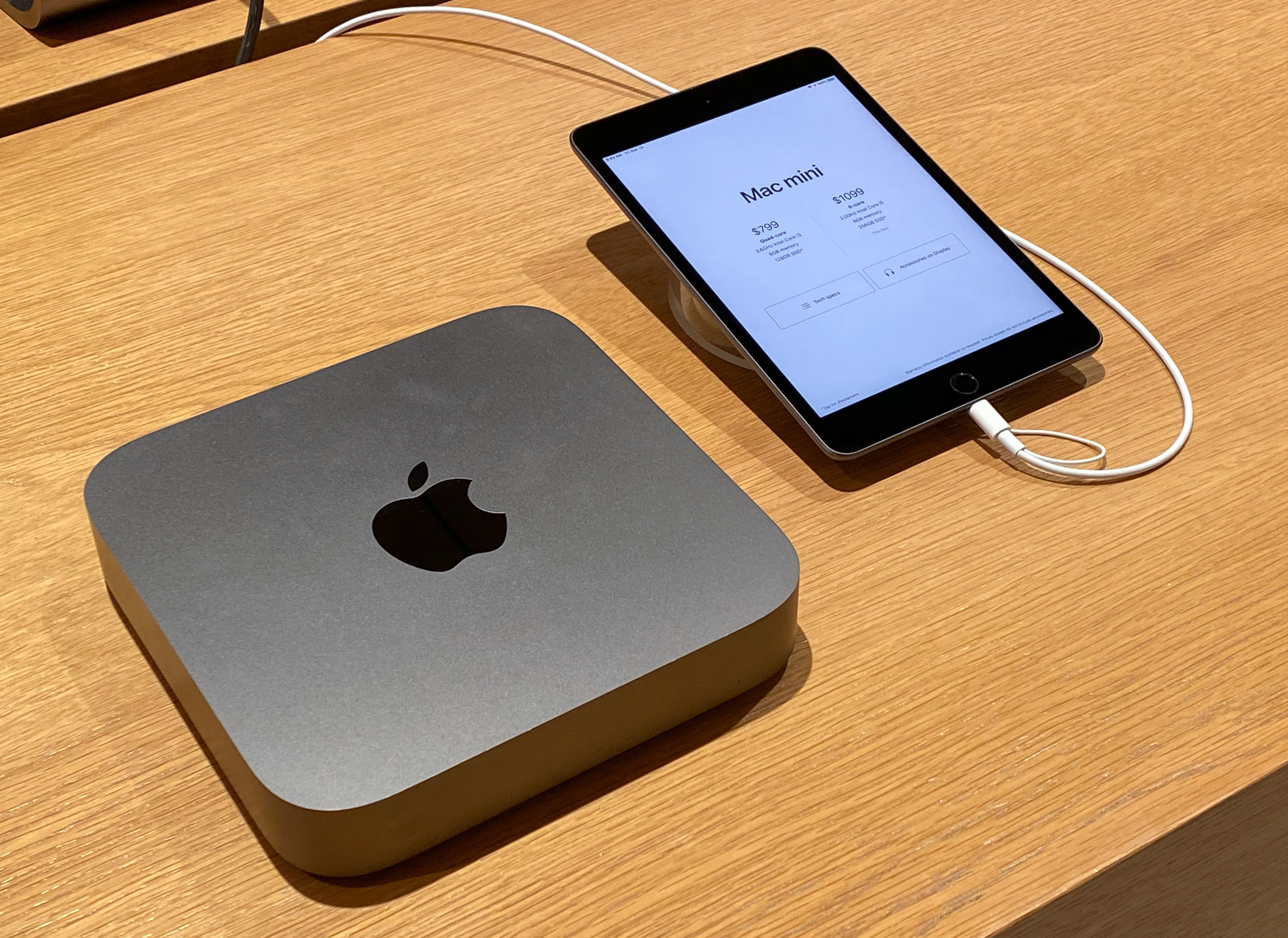 Continue with parts 2 and 3 in this series on Apple Retail in 2019: